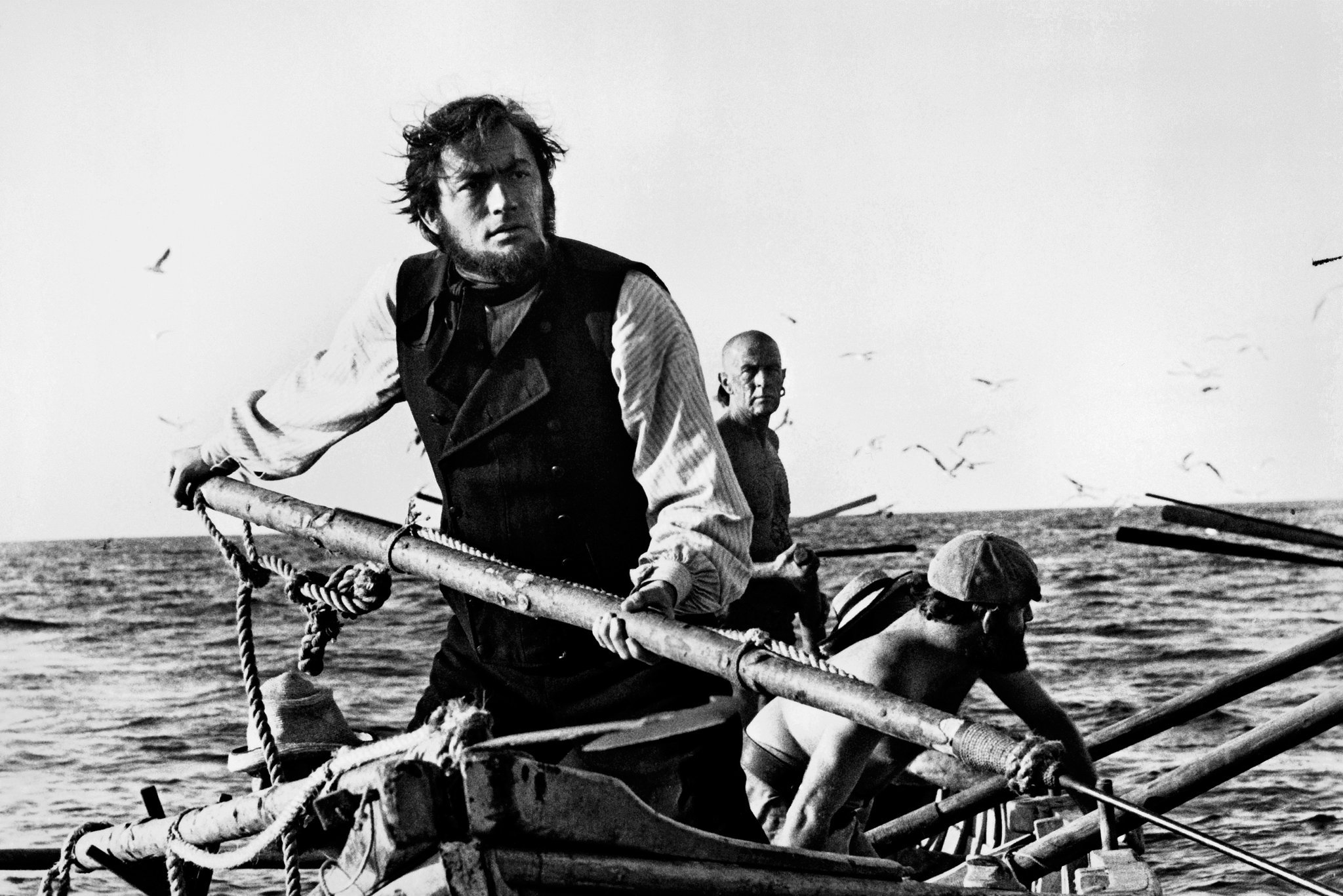 Lead illustration by director, writer, editor, and video essayist Peet Gelderblom. These films are not in production, except in my imagination.

The reclusive director follows up his long-awaited Fountain of Youth project with the ultimate nautical adventure, and does not disappoint. Herman Melville’s supposedly unfilmable novel—which stymied John Huston, among other would-be adapters—gets the cosmic, ruminative treatment in this three-hour CinemaScope epic, which alternates quicksilver, free-associative montages with the most surprisingly conventional and exciting action scenes Malick has ever directed. As Ahab—arguably the role he was born to play—Mel Gibson gives a surprisingly restrained performance, resisting the natural inclination to play the character as Long John Silver on crack. Gibson instead directs his intensity inward, a decision that lends Ahab a lordly detachment and icy, inscrutable anger reminiscent of mid-period Laurence Olivier; the performance is aided immeasurably by Emmanuel Lubezki’s cinematography, which often hides Ahab’s eyes in Rembrandt pools of torchlit blackness or, in daylight scenes, in the sliver of shadow cast by the brim of his cap. Throughout there are curious but distinctly Malickian changes—including the casting of Apocalypto star Rudy Youngblood as a Starbuck who’s actually a combination of the characters of Starbuck and Queequeg, with Maori tattoos and a habit of meditating on deck at the same time every day, even during storms.

But for the most part, Malick’s Moby Dick incorporates more of the novel than anyone expected, with Ishmael’s distinctive, first person-yet-omniscient ruminations put to especially good use. Although the film has but one narrator (a contrast to recent Malick films), the tone and style are similar to The Thin Red Line—meditative, fascinated by rituals and social structures, and attuned to the moment-to-moment beauty of the sea and the infinite variety of creatures dwelling within it. (The movie begins with a woodcut-illustrated prologue about the history of whaling, set to scratchy 1920s-era, 78 rpm recordings of sea chanteys performed by Australian seamen, supposedly drawn from the director’s record collection and played on his grandma’s Victrola.) The movie’s aesthetic high point is one of the largest seaborne action sequences ever filmed: a 20-minute section depicting the pursuit, slaughter and stripping of harpooned whales, a process shown in great detail while Ishamel recites passages from Melville’s novel—including an observation that doubles as the movie’s tagline: “There’s no savagery of beast that’s not infinitely outdone by man.”

Kurt Vonnegut’s novel was adapted once before—in an effective but not quite transcendent 1972 version by George Roy Hill. For anyone considering an adaptation of this book, the sticking point is the question of how much one should literalize the idea that the main character—optometrist, suburban drone and traumatized World War II conscientious objector Billy Pilgrim—has “come unstuck in time.” Soderbergh’s version makes that idea quite metaphorical while maintaining plausible deniability. We’re never entirely sure if the tale’s intricate flashback/flash-forward structure is the result of Pilgrim’s actual dislocation in time and space (indicated by his sojourn on the planet Trafalmador, where he’s kept as a zoological specimen by aliens and made to mate—and live a weirdly awkward facsimile of domestic life—with Johansson’s porn star Montana Wildhack) or if he’s suffered brain damage as a result of a plane crash and is roaming through his actual past and fantasy life in sort of a mid-century, sci-fi inflected American version of Marcel Proust’s In Search of Lost Time. Reassembling all of his collaborators from his greatest film, The Limey—which also had a nonlinear structure and a black comedic yet powerfully emotional feel—Soderbergh creates a puzzle-box film that plays like a summation of everything he’s seen, learned and made during two decades as a filmmaker and moviegoer. It’s a model of daring storytelling, a period piece about middle-American malaise during the Vietnam era, a harrowing absurdist war movie (the Dresden bombing scenes rival Apocalypse Now in their epic craziness) and an intensely erotic yet unexpectedly charming sex farce. (The Trafalmador scenes feature extensive full frontal male and female nudity—which, coupled with footage of burn victims in the Dresden sequence, guarantees Slaughterhouse an NC-17 rating; but Soderbergh, whose movie is already in profit thanks to worldwide presale agreements, gives the MPAA the finger and releases the picture unrated.) Ed Lachman’s CinemaScope images are so fluid, varied and mind-bogglingly beautiful that upon the picture’s release, the Academy of Motion Picture Arts and Sciences declares the cinematography category closed that year, and messengers the statuette directly to his house.

Lee’s movies always seem to be on the verge of bursting into song; with The Emperor Paul, he scratches that itch at feature length for the first time since School Daze, but with a striking difference: the entire movie is sung-through from start to finish, gliding gracefully through different phases of Paul Robeson’s life—football player, opera and musical star, pioneering African-American movie star, temperamental diva, anti-racism activist and Communist pariah. Lee’s selection of Sondheim to do the score and lyrics for a biopic of a politically incendiary African-American surprises many, given Lee’s own past pronouncements on such matters. But the director’s blunt explanation—“He’s the only musical theater figure alive today who’s in Robeson’s weight class, so it was a no-brainer”—sets the issue to rest before production has even started. Shot on immense, defiantly “unreal” breakaway sets and lit like a Vincente Minnelli melodrama (by longtime Lee collaborator Ernest Dickerson, going behind the camera for Lee for the first time since Malcolm X) the movie’s an unclassifiable, politically and aesthetically divisive work that at times plays like a hybrid of Bob Fosse’s Lenny and Jacques Tati’s Playtime. But its sheer chutzpah earns respect even from those who find it pretentious, sanctimonious and borderline impenetrable. The film’s visual and musical zenith is a seamless three-minute montage that shows Robeson on a whirlwind music tour of North America, Europe, Asia and Africa, singing his way through “All God’s Chillun Got Wings” in English, French, Spanish, Russian, Japanese and Swahili. Star Terrence Howard doesn’t look much like Robeson—but considering that he’s credible as an intellectual, a musical genius, a bad boy and a tragic figure, and does all his own singing to boot, what’s not to like?

The cartoon auteur behind The Iron Giant and The Incredibles pushes his art one step further in an adult direction, turning Richard Adams’ 1972 novel into a dark allegorical epic that borrows equally from Spartacus, the New Testament and Picnic at Hanging Rock. Adams’ narrative—about a displaced warren of rabbits following the visionary Fiver to a promised land somewhere in the English countryside—is played straight, including the often shocking scenes of rabbit-on-rabbit (and dog-on-rabbit) brutality that made both the novel and the previous, 1978 film adaptation such a shock to parents who’d expected a time-waster about cute widdle bunnies. Working for the first time as a director of photography on an animated feature, cinematographer Haskell Wexler, who shot about half of Days of Heaven back in the day, fills Bird’s widescreen canvases with an overwhelming variety of natural textures and colors, often employing a faux-deep focus technique that he says is modeled on the Technoscope cinematography in Sergio Leone’s spaghetti westerns. The movie is rated PG-13, but brushes with an R because of what the MPAA calls “graphic animal violence and situations so emotionally intense that they make Bambi look like Scooby-Doo.”

The pop culture-savvy director of Gremlins, Matinee and Looney Tunes: Back in Action returns to the Warner Bros. stable and turns out this brisk, 72-minute comic epic based on Homer’s The Odyssey, starring Elmer Fudd as the wandering Odysseus, Bugs Bunny (in drag, natch) as his beloved Penelope, and a constellation of costars in plum supporting parts (including the Tasmanian Devil as the Cyclops and Daffy Duck as Penelope’s most persistent would-be suitor, Ducchus). South Park creators Trey Parker and Matt Stone and their preferred composer, Marc Shaiman contribute 14 original (and uncharacteristically squeaky-clean) tunes in a variety of styles, ranging from 1940s Bing Crosby-style torch song to Gilbert and Sullivan-style libretto that plays during the thrillingly absurd finale, which crosscuts between Odysseus/Elmer returning home and preparing to eliminate the suitors, and Penelope/Bugs preparing for a wedding that’ll be aborted as soon as the cleric says, “Speak now or forever hold your piece,” prompting Bugs and Daffy’s most elaborate bit of absurdist wordplay since the “Shoot him now” exchange in “Rabbit Seasoning.” In CinemaScope, of course.

Review: Because I Said So