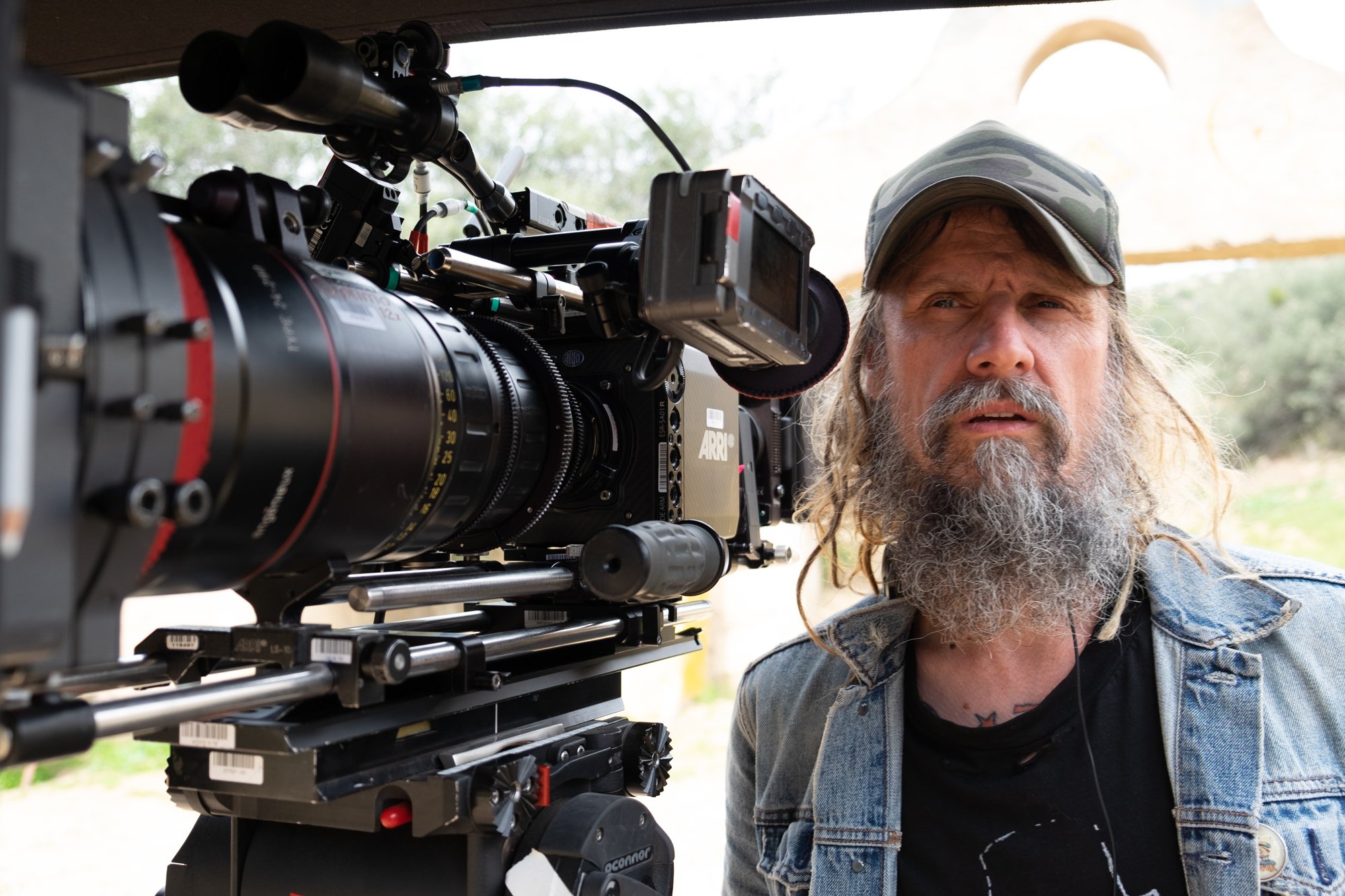 Musician Rob Zombie is also one of the most original and distinctive of modern horror directors, having fused the theatricality of his concerts and videos with the tropes of Southern-fried slasher films to arrive at an aesthetic that captures the narcotic pull of violence. His films, which include House of 1000 Corpses, The Devil’s Rejects, The Lords of Salem, and the dramatically underrated Halloween II, often feature characters who are gutter poets and expert tenders to their own mythology in the tradition of Charles Manson.

Zombie’s villains also often suggest musicians themselves, as they’re elaborately outfitted and self-conscious of their murder sprees as a kind of performance art, which Zombie films up close with piercing intimacy, fetishizing power while also dramatizing the pain and humiliation of death in extremis. At their best, Zombie’s films are so unnerving because he plunges you unapologetically into their aggression and squalor, which he laces with shards of dark and even unexpectedly loony comedy. (In The Devil’s Rejects, a band of killers has an elaborate argument over whether or not to stop for ice cream.)

Zombie’s latest, 3 from Hell, continues the story of the filmmaker’s most famous characters, the Firefly clan of House of 1000 Corpses and The Devil’s Rejects, played by Sid Haig, Bill Mosley, and Zombie’s wife, Sheri Moon Zombie. Last seen going out in a blaze of glory, the Firefly Clan, newly revived and captured by the law, of course embarks on another bender of ultraviolence. Richard Brake, the MVP of Zombie’s 31, plays a new killer who joins the clan, which eventually winds up in a Mexican town that bears a resemblance to the climactic setting of Sam Peckinpah’s The Wild Bunch. Speaking on the phone with Zombie last week, we discussed how he corrals his films’ furious sense of energy, his love of screwing with typecasting, and how sex appeal can trump common moral sense.

Your films have a volatile and intimate style, and I’m curious about how you achieve that tone. Is there a rehearsal process? Do your actors need to work themselves up?

Well, we do try to rehearse whenever possible. Rehearsal time seems to be harder and harder these days for films. Have you seen 3 from Hell?

Okay, one scene in particular was difficult: the one where everybody’s held captive in the house, and the warden comes back with Baby. That scene was very difficult because in one room we have, I don’t know, one, two, three, four, five, six, seven, eight actors. First of all, it’s a nightmare to block, because you got people going every which way and in every which direction. And it was just falling flat. The actors kept rehearsing and rehearsing and we could just not energize it. It just kept feeling stagey, and we were all confused because everybody was doing it right. And it was like, “What is the element that’s missing? Why is this not igniting the way it should?” It was driving us all crazy.

Was there any decisive “wrong” thing or was it a matter of fine-tuning everything?

It just wasn’t kicking off on the right foot. And we changed it so that Baby comes through the door, she’s excited at what’s going on and it was just something about that moment. We made one little tweak to how someone was going to do a line of dialogue, and it’s amazing how it created this domino effect and sent this energy through the room, and the whole scene just became crazy. But it’s really frustrating sometimes when you’re trying to figure things out because we’re all working on such a time constraint. It’s not like, “Ah, we got together and rehearsed for 12 weeks.” That was the first time those eight people had ever been in a room together you know, and we’re trying to make this explosive, very complicated scene happen. You keep searching until you figure it out.

I remember watching that long making-of extra on The Devil’s Rejects DVD, and it seemed then like that tight schedule was a source of inspiration. Is that fair to say?

The tight schedule is a blessing and a curse. But I think the curse part would’ve happened no matter what. I’ve made movies with much longer schedules and there’s never enough time. I’m sure when they were shooting Jaws on day 500 they were like, “We need more time!” I don’t think it matters how much time you have, you still don’t have enough time because you always think you can make it better. On most movies, actors shoot something and then go back to their trailer, they play video games, they take a nap, they read a book, they chit chat, have a cigarette. Nobody leaves the set when I’m shooting, because we never have enough down time for them to go anywhere. And that way, they’re always there and in the moment. And that’s what you need: You need to yell “action” and they’re still there. Because it’s really hard when you start a scene, whether it’s a high-energy scene or a low-energy scene, and then people break it down for a half hour while they change the lights. Actors just lose the vibe, and then they come back in and are like, “Ah, man, where was I? What was happening?” And whenever you break for lunch, it’s like, “Ah, crap.” There’s that after lunch lull where everybody comes back full and you gotta ramp everybody’s energy up. So the short schedule works, because we never stop, we never stop, we never stop. And I think the actors like it better because they don’t want to sit by themselves all day in a trailer. They wanna act. It’s like a play.

In 3 from Hell, I like the energy of Baby’s prison scenes, and I love Dee Wallace. Her role is a great bit of anti-typecasting.

Well, I like anti-typecasting. We’ve worked with Dee several times, and Sheri had worked with Dee quite a bit on Lords of Salem. So, I like when I know that actors have a good working energy together, because sometimes they don’t and that can be problematic. When I first offered Dee the role, she didn’t say yes right away. She was like, “Oh God, this is so different, I gotta think about it.” And then the next day she said yes. Because, you know, she usually plays the nice mom or the nice whatever, I guess she’s been typecast since E.T. But, you know, now you can be the mean, shitty lesbian prison guard. You’re an actor, you got it. [laughs]

What makes Dee really pop in this role is that the niceness isn’t entirely gone. The character is chilling because she has a strange vulnerability.

There’s a weird dynamic we wanted to create, where she’s not just this prison guard from something like The Big Bird Cage. Dee’s character is in awe of Baby and in love with her but hates her guts at the same time. I always like creating these weird relationships between the characters. Baby’s in Dee’s head and she knows it. To diverge for a second, I remember seeing this footage of Charles Manson. He was coming in to sit down to be interviewed by Tom Snyder or whoever. In the outtakes before the interview started, Manson was standing there bullshitting with the film crew. It’s so weird. He’s like, “Hey, man, where you from? Oh shit, man, I’ve been there before.” The crew doesn’t think of Manson as a murderer, he’s like a rock star to them. There’s this weird fascination because he’s so fucking famous. It’s a sick thing.

Your films have an edge because they’re willing to tap that fascination. You’re willing to leave moralism behind and groove on the charisma of these evil people. You’re honest about the cultural attraction to killers. Do you think of it that way?

Yeah, I totally do. The reason I can get away with the Fireflies doing what they do in these movies, and people liking them, is because they’re cool and charismatic and sexy. That’s who people are drawn to. If they were like hideous to look at and disgusting, audiences would say they’re horrible. But this guy looks like he’s, you know, Gregg Allman, and this girl looks like she’s like Farrah Fawcett, these guys are awesome! People are into them.

You have a good point. People don’t quite worship David Berkowitz the way they do Charles Manson. One has the sex factor.

Yeah, there’s a cool factor. Manson does look like Dennis Wilson or John Lennon. Though when you research, when Manson and the family shaved their heads and put the swastikas on their foreheads, they lost the youth culture. Before, people were outside the courthouse in L.A., and they were interviewing people, and some of them were wearing “free Manson” shirts. The Family was on the cover of Rolling Stone and all the hippie rags. But the swastikas made people think, “Okay, he’s not the cool hippie dude we thought he was.” Would Jimi Hendrix have been who he was if he was a big fat bald guy? No, it’s because he was fucking cool. Would the Beatles have been the Beatles if they were all ugly, stupid-looking dudes? No, it’s because everyone thought they were good-looking. That goes so far in the world. More now than ever.

Review: Midnight Traveler Is a Harrowing Document of a Family’s Escape