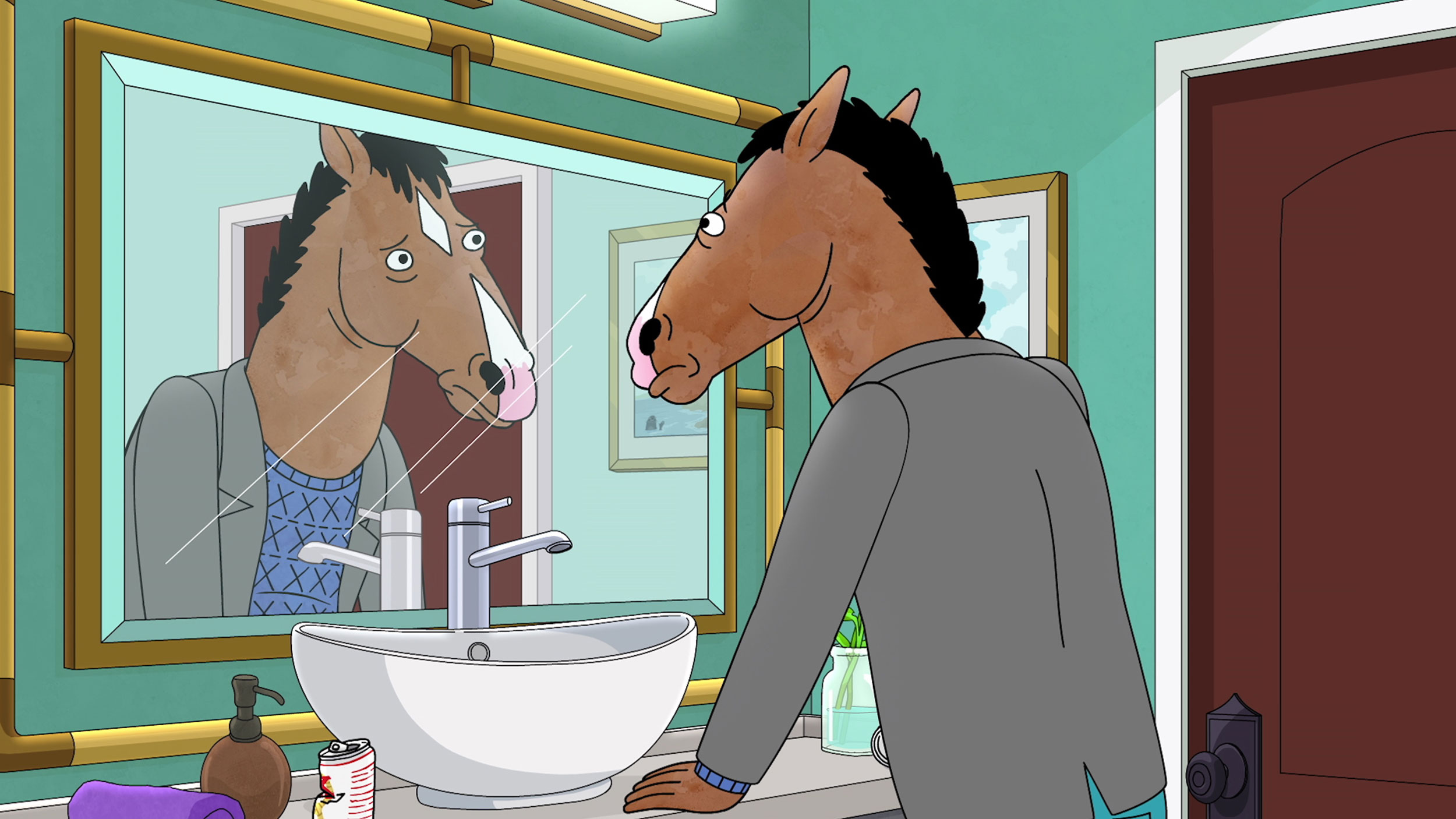 Netflix’s BoJack Horseman is about many things. How we make sense of a senseless world. How we find happiness amid constant crisis. How we assert and give others power. That’s a lot for any show, let alone the animated misadventures of a famous horseman, one whose life stands on the razor’s edge of celebrity privilege and deeply internalized emotional self-abuse. Contending with BoJack Horseman, now as it comes to its conclusion, has meant contending with my own life these past six years, which have been made markedly better by this series. This exercise would have been much more difficult had the final episodes failed to deliver. (Spoiler alert: They don’t.) 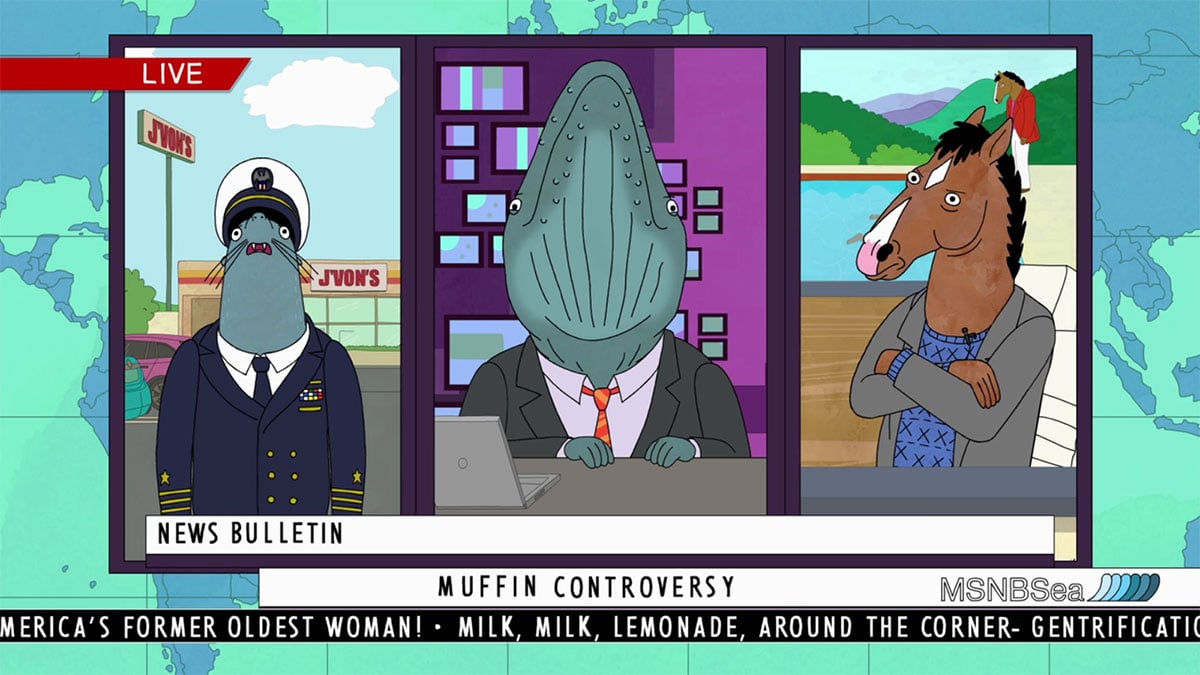 First, let me be clear: I love this episode, which feels like an early performance by a beloved artist who went on to greater and more daring things. Maybe there’s a note or two out of place. Maybe they aren’t stretching their talent as much as you think they can. BoJack’s (Will Arnett) profound pettiness makes him an asshole to many—here, it’s the contested dibs over a box of muffins at the grocery store that lands our remorseful horse in the national spotlight—and it’s admirable how this episode leads the charge in painting that fact unambiguously. In a way, it feels like a foundation stone of sorts (one of several), featuring as it does BoJack’s decision to open up to Diane (Alison Brie) for his memoir. Full truth: From here, mountains are made. 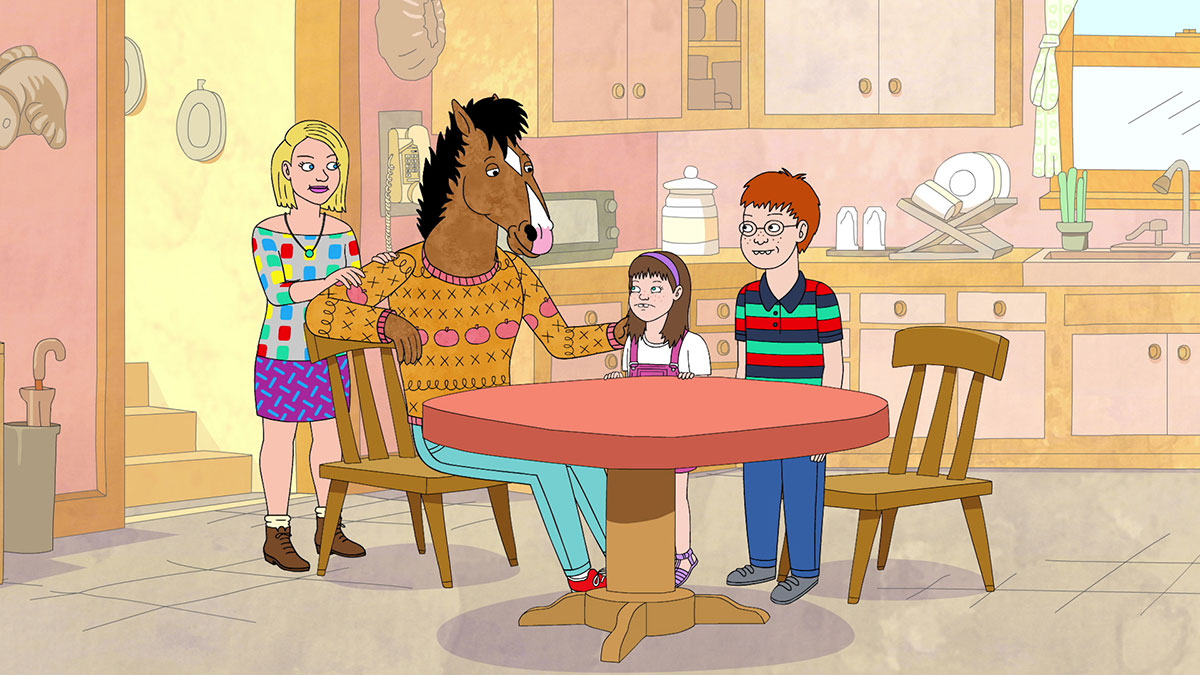 The mere existence of this holiday episode made it unambiguous that BoJack Horseman was created out of love. Further enriching the world so thoughtfully laid out in the first season, this metatextual holiday episode, in which BoJack and Todd (Aaron Paul) watch one of the Christmas episodes from Horsin’ Around, came as an unannounced Christmas gift in 2014. It also, hopefully, satisfies those who will inevitably be curious about what a proper episode of the show-within-the-show looks like, and Todd’s four-word refutation (“I can’t, can’t I?”) of BoJack’s faulty logic stands with the funniest moments of the series. 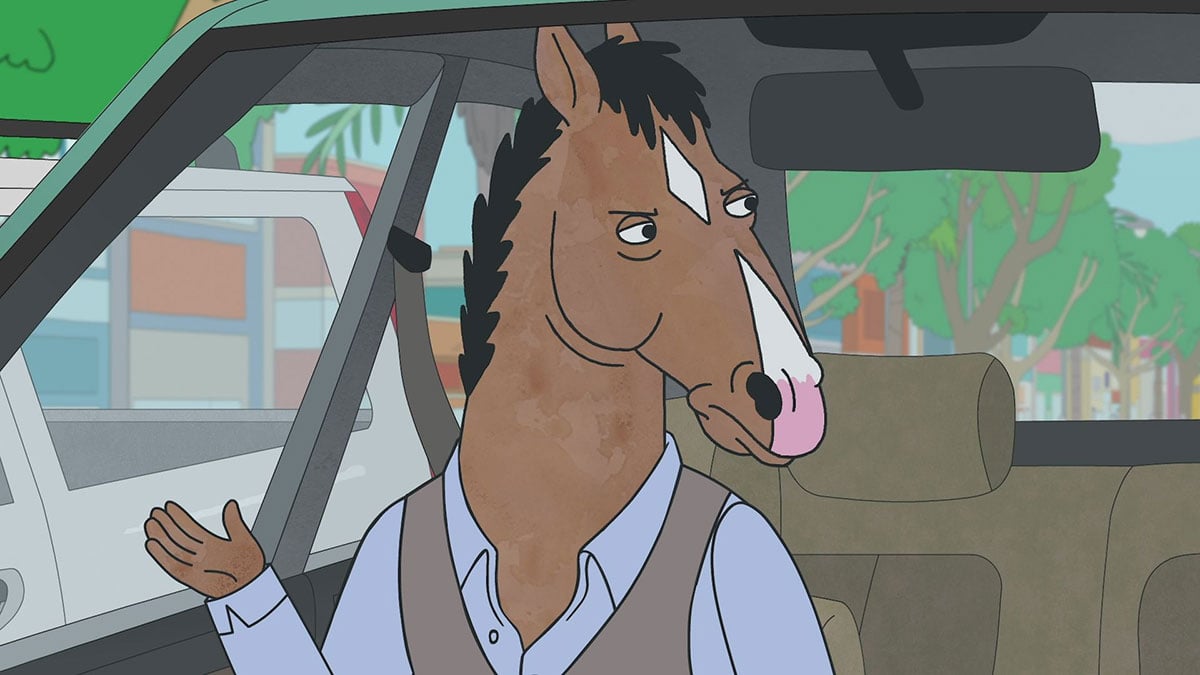 A novel exposition dump, this episode goes back to 2007, when BoJack and Princess Carolyn (Amy Sedaris), a cat, first slept together. Its title refers to the name of BoJack’s sophomore TV series, a vulgar satire that tanked and was promptly canceled. This episode also lays general groundwork for episodes and seasons to come. Lots of obvious references abound—e.g., Princess Carolyn pitches scripts for No Country for Old Men and There Will Be Blood, though films actually being shopped around at that time instead of those just arriving in theaters might’ve been a better touch—not unlike a Trojan horse for the ongoing world building. The highlight herein is an updated version of the show’s end credits song, adapted to underscore BoJack’s much less successful follow-up to Horsin’ Around. 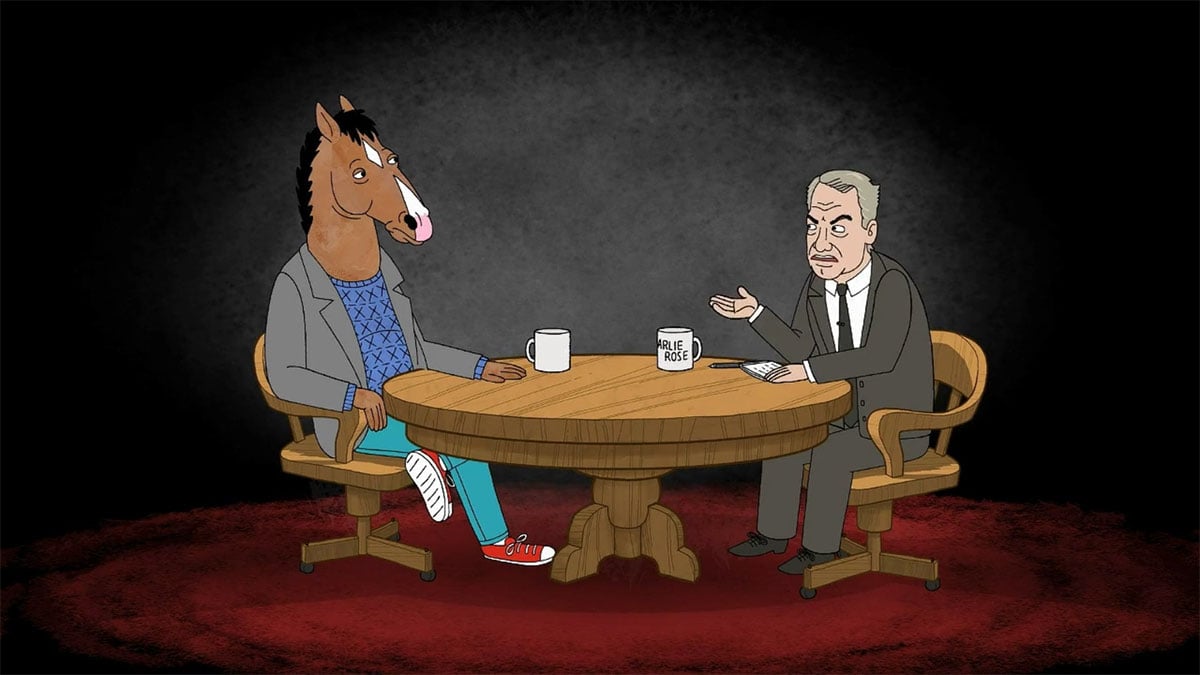 This first episode doesn’t get its due. Brilliantly juxtaposing scenes from BoJack’s interview on The Charlie Rose Show with a gotcha shot from this world’s version of Maury, this first look at BoJack’s anxiety-ridden existence had the difficult task of establishing the show’s very particular tone (think Chuck Jones meets Don Hertzfeldt meets Albert Brooks) while also making blatant the sadness beneath it. The serious and silly rub shoulders here, like travelers on a crowded bus trip. It’s subversive, too, in warning against the dangers of over-binging; BoJack re-watches his old show obsessively, including the finale in which his character dies, at the expense of almost everything else in his life. This episode features Patton Oswalt in three parts, a Sellers-esque stunt that will prove to be one of the show’s regular hat tricks, while the closing gag exhibits the raw confidence required to deploy both guffaws and sobs with such simultaneous precision. In hindsight, it’s no surprise. 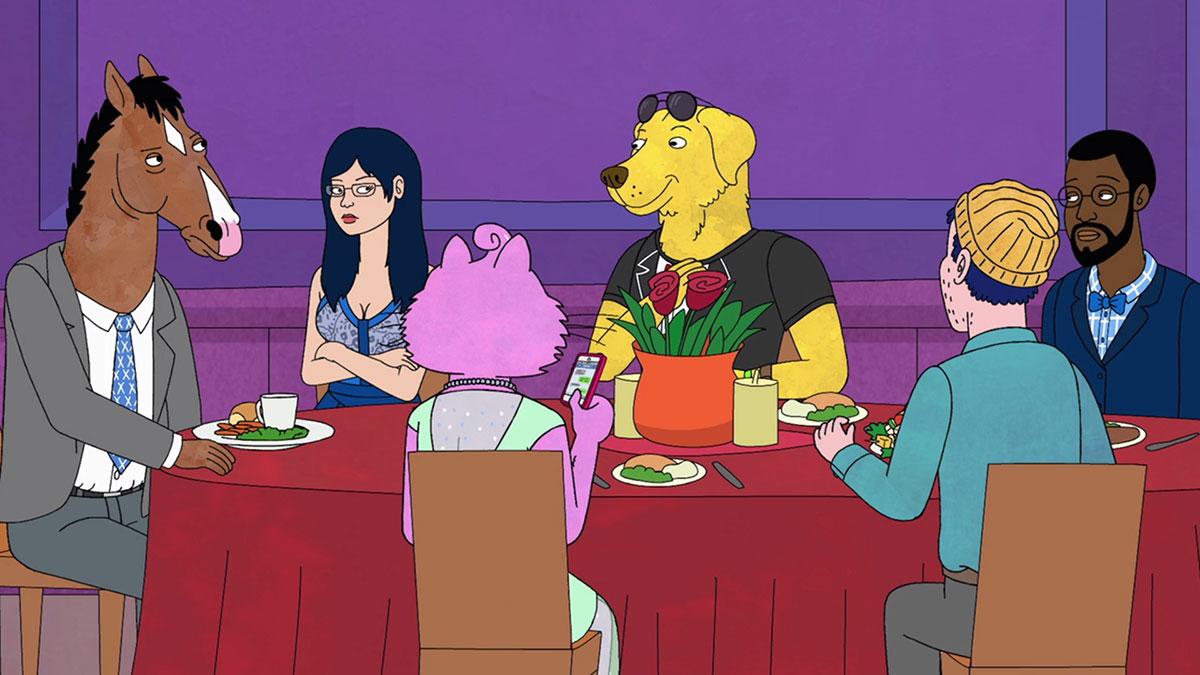 It was a small stroke of genius to introduce early in the series a pop-cultural dichotomy specific to this world. Leonard Cohen sang of a bird on a wire, and here the either/or stems from characters on Mister Peanutbutter’s House, a knockoff of BoJack’s sitcom in which the eponymous canine raised two little girls: Zelda, a fun extrovert, and Zoë, a cynical introvert. This episode features some of BoJack’s funniest quips and nastiest deeds. As for Todd’s rock opera, I’d be lying if I suggested that I didn’t want to see it brought to greater fruition. This episode does a lot of prep work for the season and the series, and does it well, while Wyatt Cenac’s performance as one of Diane’s exes provides a weary vantage point, effectively underscoring what makes this world feel so emotionally real in the first place. 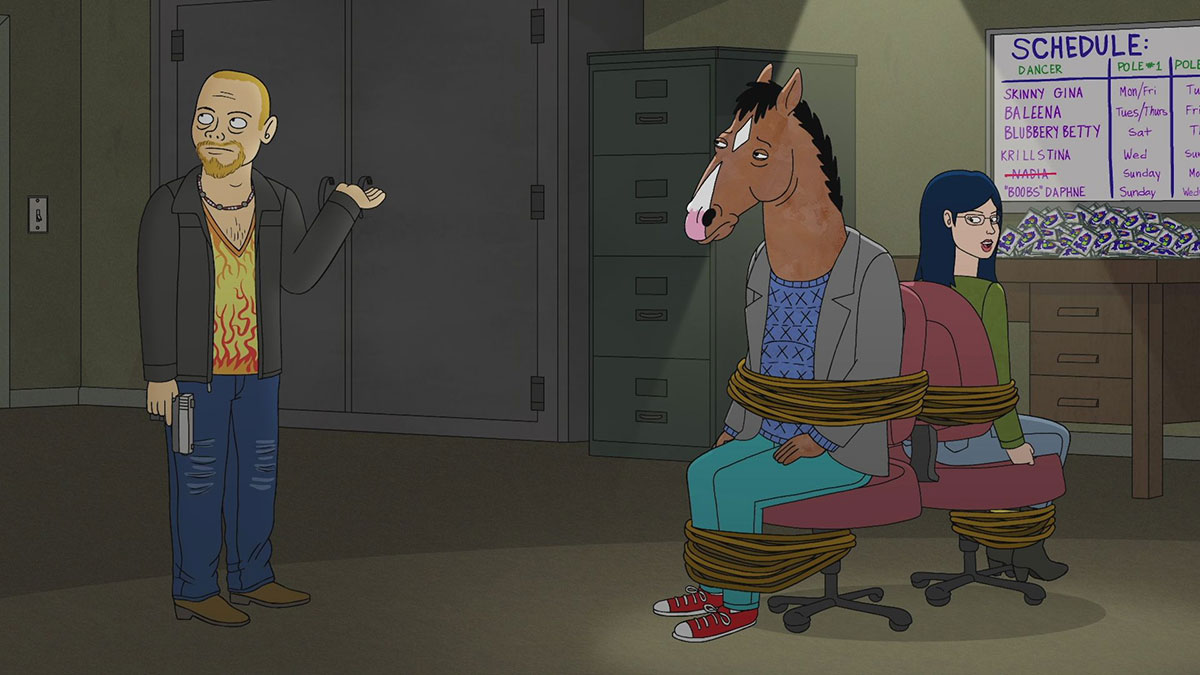 Plot-wise, this is a lowkey key episode in the series, establishing the source of the heroin that ultimately causes Sarah Lynn’s death. That would be Richie Osborne (Fred Savage), former Horsin’ Around cast member and current proprietor of Whale World, a family-friendly strip club that doubles as a drug front. BoJack and Diane get to catch up and establish a greater understanding of themselves (“I can’t keep asking myself if I’m happy, it just makes me more miserable,” says Diane, summarizing my 30s so far in 14 words), but my favorite moment is probably the chef’s-kiss perfection of Mister Peanutbutter’s LL Cool J reference (a close second is Angela Bassett’s line delivery on “you betcha”). 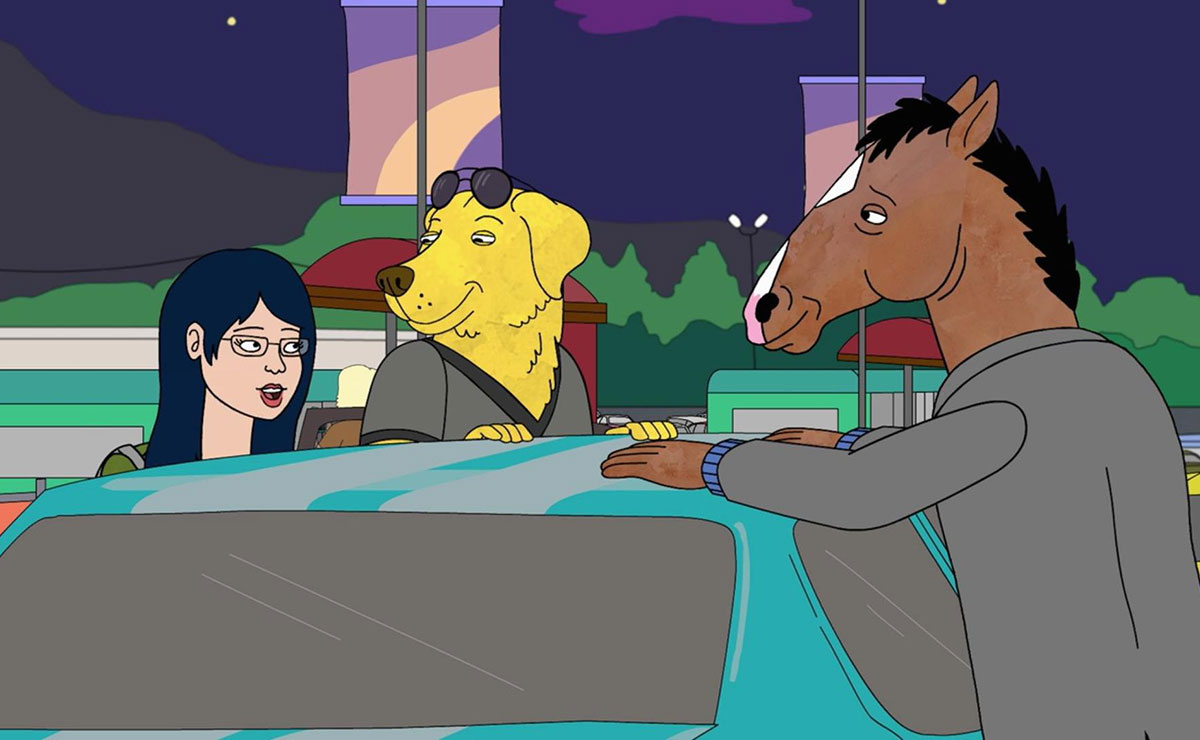 If BoJack Horseman’s flair for wordplay wasn’t already clear, this episode is tantamount to a flag planted on the moon for all to see. Hollywood becomes Hollywoo when BoJack steals the “D” from the Hollywood sign in a drunken stupor, all in the hopes of impressing Diane after squaring off with Mister Peanutbutter—and buying the restaurant Elefante in the process. Todd, having found himself in prison at the end of the previous episode, navigates the various gangs courting him in sublimely naïve fashion, while BoJack’s backup plan to fix the “D” situation results in a tragedy befalling Beyoncé and, relatedly, one of the very best verbal gags in the entire series.

Every DC Extended Universe Movie Ranked from Worst to Best