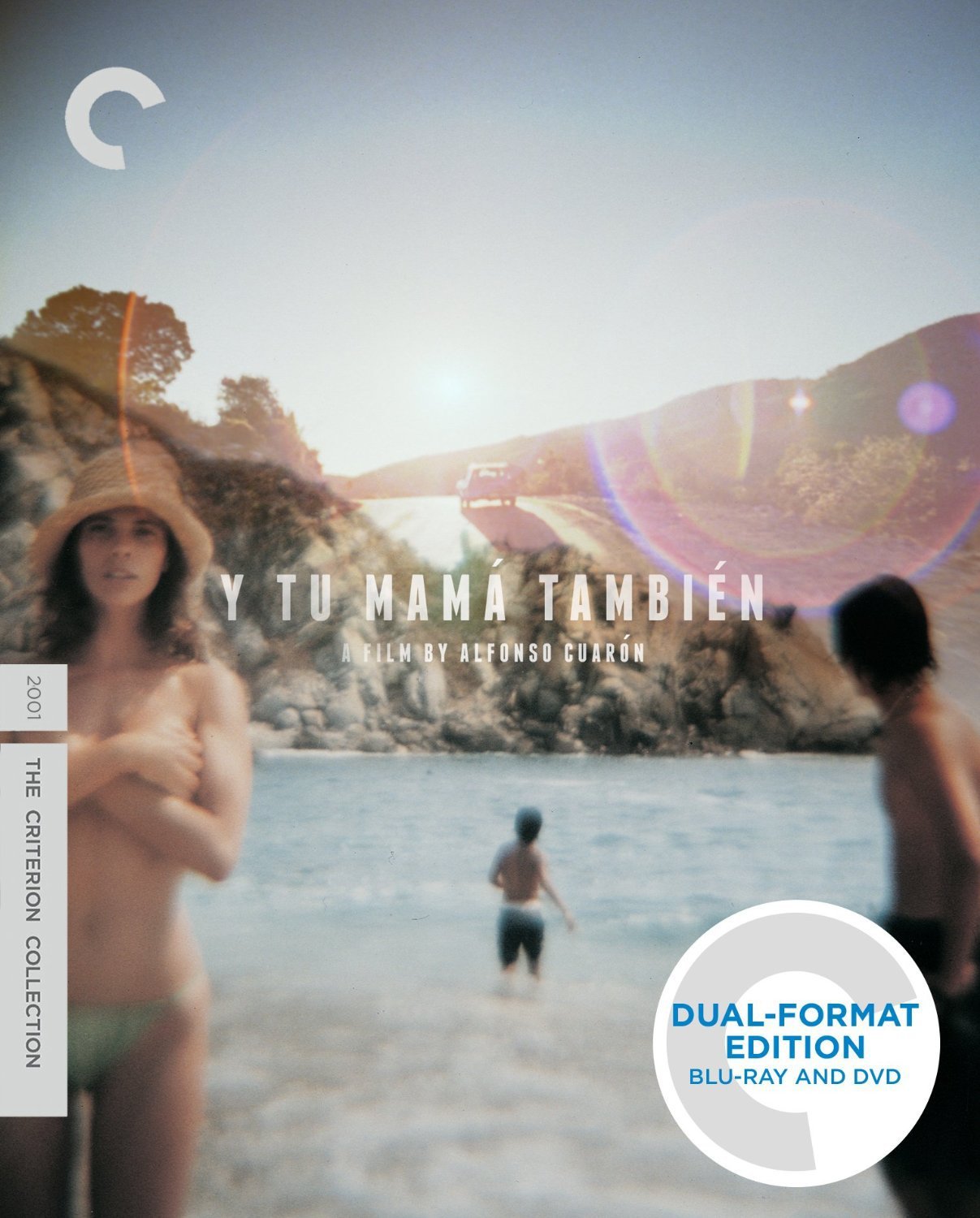 Arguably all of Alfonso Cuarón’s films are predicated on the unrelenting desire to live, playing out on a cosmic scale, such as in Gravity and Children of Men, or internalized under false (and playfully vengeful) pretenses like in Sólo Con Tu Pareja. The horny and obnoxious teenagers at the center of Y Tu Mamá También are never in danger of anything more threatening than a UTI (as they only concern themselves with partying and fucking), and on the basis of these characters alone the film plays more like the snarky black sheep within Cuarón’s cinema of unapologetic mortality. Of course, the story of Tenoch (Diego Luna) and Julio (Gael García Bernal) makes up only half of Y Tu Mamá También, as that ribald bildungsroman works at an apparent remove from another narrative, one in which Cuarón’s pet themes emerge: Although Tenoch and Julio may be willfully ignorant to it, their lives are irrevocably affected by the political and social insecurities of Mexico as the country embraces a dubious idealism.

After a disillusioning decade-long stint working as a cog in the Hollywood machine, Cuarón returned to Mexico to make Y Tu Mamá También as a means of liberation. The resulting film certainly brims with a liberating atmosphere, from the elaborate long takes to the central road trip, which begins as nothing more than Tenoch and Julio’s impulsive and meaningless come-on to Tenoch’s cousin’s wife, Luisa Cortés (Maribel Verdú): The two friends inadvertently woo Luisa, a woman who turns out to have a similar lust for life as the teens, into joining them on a trip to “Heaven’s Mouth” (a beach that may or may not even exist). It’s a cut-and-dry setup, suggesting a 21st-century rehash of Jules and Jim, but Cuarón meticulously arranges background action to create a sly yet caustic critique on his home country that recalls Nagisa Oshima in his heyday.

The trio’s journey takes them from the heart of bustling Mexico City to the rural outskirts where the fabled beach lies, and Cuarón uses these changing landscapes in order to show the vast extent to which Mexico’s dominating classist society affects its citizens. Early on, Julio and Tenoch pass a recently deceased man on the road, who had been struck by a car after a new construction site caused traffic to interfere with his everyday walk to work; this scene is echoed later when the character of Chuy (Silverio Palacios), a fourth-generation fisherman, eventually must cede his family business due to the construction of a ritzy hotel near his home. Through these two intricately connected moments, Cuarón emphasizes an environment where old traditions are tragically usurped by ostensible civilian accommodation, and that a bureaucracy that purports to work for its people will have no qualms sacrificing modest livelihoods in order to enhance the lives of those higher on the social ladder.

Tenoch and Julio explicitly put faces on the disparate classes, as the former comes from a privileged family who dines with the president (Tenoch’s father is the Harvard-educated Undersecretary of State), and the latter comes from a lower-class family just able to make ends meet (Julio’s mother is an office secretary). Their hard-ons for Luisa may in fact be for each other, and Cuarón cannily conflates the friendship’s homoerotic overtones with social solidarity. Tenoch and Julio’s climactic kiss is indeed a tender moment, offering a glimpse of hope into an already-crumbling companionship; it’s ultimately the final straw, however, and Cuarón underlines this inevitable dissolution with the bitter implication that, on a larger political scale, opposite economic standings cannot find a way to bridge the strict class divide, and thus cannot be reconciled into a harmonious relationship. (Cuarón hints at this social distaste earlier with Tenoch’s inherent need to lift up the toilet seat at Julio’s house with his foot.)

An amusing tension develops between Luisa, Tenoch, and Julios’s enthralling antics and the film’s clinical and cold narration, which is read almost in the kind of offhand nature a teacher might recount a historical event. This omniscient and very talkative narrator (Daniel Giménez Cacho) frequently details past and future stories about the trio, even dwelling into the current political climate that surrounds them. By the film’s conclusion, Tenoch and Julio’s friendship comes to a definitive end in conjunction with the recent ominous defeat at the polls of Mexico’s accustomed, 71-years strong political regime. The loquacious narrator, so suspiciously silent after relaying this brief bit of information about the country’s current state, comes off as portentous in his reticence: Given the numerous depictions throughout the film of the government intruding on the lives of the Mexican citizens, Tenoch and Julio seem as if they can’t ignore their environment any longer, and as their separate lives precariously begin, their desire to live will be born out of pure survival instinct instead of bacchanalian pursuits.

Overseen by the masterful Emmanuel Lubezki, Criterion’s 2K transfer is, unsurprisingly, a markedly superior upgrade from previous DVD releases of the film. Colors, particularly yellows and Alfonso Cuarón’s favored earthy greens, are vibrant; blacks are just as striking, being inky and deep without appearing crushed. Grain levels are even and never distracting throughout, making for rich and clear visuals, especially in the climactic one-take bar sequence. The immersive DTS-HD surround sound is effectively balanced, with music never overpowering dialogue, and softer voices and noises heard with just as much depth and clarity as louder ones.

It may not seem like a lot on the surface, but Criterion opts for quality and diversion in the extras department. Perfectly reflecting the relationship between the past and the present that’s one of the film’s themes, the main documentary is split into two parts, the first a 10-minute, EPK-style behind-the-scenes look at the shooting of the film, and the second a 40-minute retrospective which covers all the bases of Y Tu Mamá También’s production. Cuarón provides insightful information into details that may have flown over the heads of international audiences, such as the slang spoken by Tenoch and Julio. The other rewarding inclusion is a too-brief Slavoj Žižek interview that sometimes plays like an outtake from The Pervert’s Guide to Ideology, with Žižek’s infectious enthusiasm on full display as he interprets the film’s dense political context. A 2001 documentary on the film doesn’t offer any valuable information regarding the production, but instead plays like a parody of a making-of video, as it retains the same detached narration as the film and features extensive goofing-off from the cast and crew. You Owe Me One, directed by Alfonso’s brother, Carlos, is a diverting short film that conflates sex and the division of classes with much of the same biting humor as Y Tu Mamá También. Short deleted scenes and trailers are also included, as is a booklet (or, more appropriately due to the length, a novella) containing an elegant essay by Charles Taylor and comprehensive biographies of Julio, Tenoch, and Luisa (and, of course, Julio’s car) written by the Cuarón brothers.