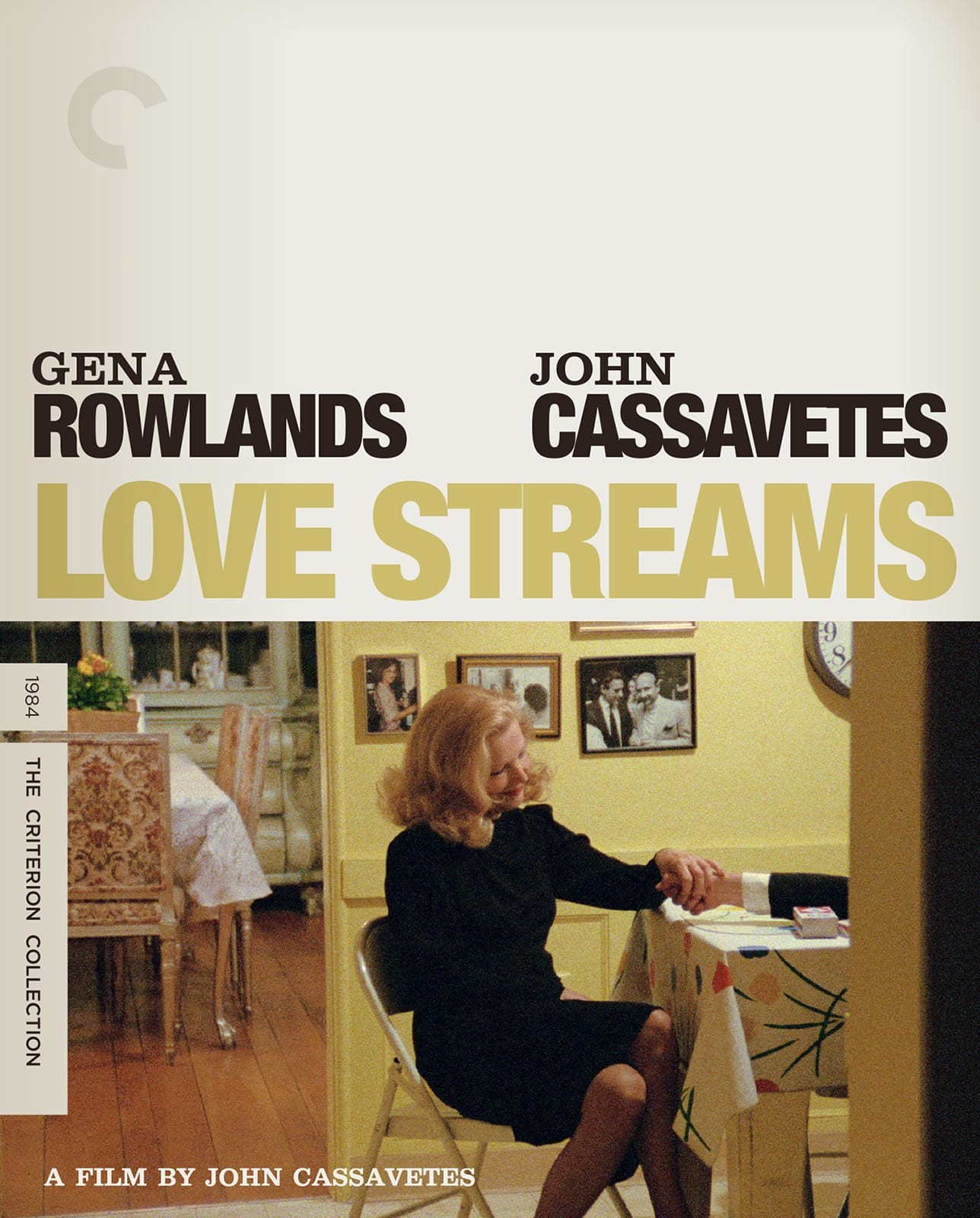 John Cassavetes’s penultimate film, Love Streams, is the grand summation of a career devoted to prodding at all the messy, complicated layers of life. It contains fragments of the director’s earlier work (the midlife crises of Husbands, the mania and disconnect of A Woman Under the Influence, the drunken self-doubt of Opening Night), but reframes their open-ended explorations around the finality that Cassavetes felt approaching after being diagnosed with terminal cirrhosis.

At the start of the film, however, you could mistake it for a bleak comedy about the fear of getting old, not of never reaching advanced age. Two distant siblings, Robert (Cassavetes) and Sarah (Gena Rowlands), must each contend with upheavals in their lives: alcoholic author Robert learns that he has a son, Albie (Jakob Shaw), and must square the boy’s presence with his usual bacchanalia, while Sarah (Gena Rowlands) reels from a divorce from her husband (Seymour Cassel) and the maddening blow of her daughter requesting her dad take sole custody. Other filmmakers might have been content to simply stick with this premise, wringing humor from Robert’s befuddled entry into fatherhood and Sarah’s abandonment issues, but Cassavetes instead uses these shake-ups to loosen the characters and observe how they react.

The title alludes to a philosophy that Sarah clings to like driftwood as she faces the indifference of her ex-husband and daughter, that love is “continuous, it doesn’t stop.” But a stream, like any flowing body of water, also takes the path of least resistance, and it responds to sudden obstacles with diversions that can magnify and ultimately chart a vastly different course. It’s that potential for slowly reverberating change and growth that Cassavetes stresses with the film, and he tracks these mounting reverberations with subtle variations in his own directing style.

The handheld, up-close aesthetic that superficially defines Cassavetes’s visual trademark is replaced by mounted setups and even some film-school-ready compositions and props. Inside Robert’s home, doorways are used to separate Robert and Sarah after their reunion, emphasizing the emotional isolation of both characters by constantly blocking one character out of sight. There are even blatantly symbolic sight gags, like the mountain of baggage Sarah takes with her on a trip to Europe desperately intended as therapy. Nonetheless, the added distance between the camera and the actors doesn’t preclude Cassavetes from continuing to erase the emotional and physical barriers between performance and its documentation.

Cassavetes’s love of the big gesture remains intact, and he shoots himself in honest, unflattering terms. He lets the camera take all of him in, with his cirrhosis-bloated gut and sallow skin, refusing all actorly vanity in letting his own condition define the inner rot of his character. Cassavetes also uses that space to execute some truly deft comedy, especially in the sequence where a totally sloshed Robert tries to woo Susan (Diahnne Abbot), a dancer at the club he frequents. Forcing himself into the driver’s seat of Susan’s car, Robert miraculously manages to get them back to her apartment alive, then proceeds to lose all motor control as he attempts egress, making progressively more noise in the middle of the night as he collapses on the horn and turns the radio to a jazz channel at a volume usually reserved for rock concerts. It’s a totally self-effacing scene, but Cassavetes also employs similarly grand, comic moments to communicate less clear emotions, as when Robert chases down a runaway Albie in his car and shows such paternal fury and worry that Albie’s terror is slightly offset by the vague sense that he can now see Robert as a father figure.

But if the director hedged his bets to position the film as a farewell, his most poignant gesture may be to have given Rowlands one last Cassavetian showcase. As ever, Rowlands is a whirling dervish, a collection of raw nerves that jerk violently when exposed to air, forever wearing a look on her face that betrays great focus in trying to find a way to gain self-control. In the divorce deposition, Cassavetes frames Rowlands in a three-quarter profile as Sarah suddenly angles for sole custody by making insinuating comments about her husband’s mental health, and the close-up reveals not animosity, but a hail mary to make sure that at least one person stays in her life. Sarah has the same look when she brings a ménagerie of animals to Robert’s house, a look that says this is the best possible idea she could have had. At times, the film even leaps into Sarah’s head, mapping out dreams both mundane and grandiose, as in an entire musical sequence in which Sarah’s roiling feelings of longing and betrayal etch out a ballet of both forgiveness and punitive sacrifice.

The film follows her stream, and Robert’s, as they cope on their own and with each other, and their initial contrast of personalities gradually eases as the siblings take on some of the other’s characteristics. Love Streams drops hints throughout about Cassavetes’s illness, from his appearance to that fond wave goodbye that closes the film, but it may be the equilibrium bestowed upon Robert and Sarah that best suggests a benediction. Hopeful, open-ended conclusions are common in Cassavetes’s films, but this film gives the most powerful impression that its characters have been markedly improved by their experience. It’s a preparation for death by getting one’s life in order, and even if this wasn’t technically Cassavetes’s last film, it certainly feels like the end of his legacy.

For those of us who don’t live anywhere near a city where repertory cinemas might play this film on 35mm, the only way to have seen Love Streams was by low-grade rips of an old VHS. So to go from the smeared colors, compressed detail, and heavy crush of that image to Criterion’s gorgeous transfer of a recent 2K restoration effectively offers the chance to see the film for the first time. There are so many new details: the way light bounces off Gena Rowlands’s golden hair, the true depth of tackiness in the nightclub where Robert homes in on Susan, and the suggestively jaundiced yellows of the house where Robert the character suffers the physical toll of John Cassavetes’s cirrhosis. It’s all gorgeous, and yet another reminder of how visually intuitive the director was. Audio isn’t all that dynamic, yet it too offers a night-and-day turn from the muffled, degraded quality of a digitally recorded tape, with crisp, error-free dialogue and sound.

A commentary track by Cassavetes Directs author Michael Ventura is rich with production anecdotes, picked up while shooting the great making-of documentary “I’m Almost Not Crazy: John Cassavetes, the Man and His Work,” also included on the disc. Ventura sounds like he’s recording the audiobook of his memoirs, at once reminiscing and critiquing. It’s a good tone and approach to unpacking Cassavetes, with a hint of dryness reflecting the respect the director deserves, but a focus on the simple observations around Cassavetes that match the tenor of his films. Film critic Sheila O’Malley, one of the best contemporary writers about acting, contributes a video essay on Rowlands that covers various high points of the actress’s career, but mainly delves into the symbiotic working relationship between Rowlands and Cassavetes. O’Malley gives concise insights into Rowlands’s character motivations, attitudes and many flourishes, and she also approaches how Cassavetes brought out the best in her without consigning the actress to the role of passive, inspirational muse. A theatrical trailer rounds out the disc’s extras, and an accompanying booklet contains an essay by critic Dennis Lim, as well as a piece by Cassavetes published in The New York Times just before the film’s Big Apple premiere.

Previously available only on a poor-quality, long-out-of-print VHS, John Cassavetes’s greatest film receives a loving transfer and meaty extras in one of Criterion’s essential releases of the year.

Blu-ray Review: Shôhei Imamura’s Vengeance Is Mine on the Criterion Collection