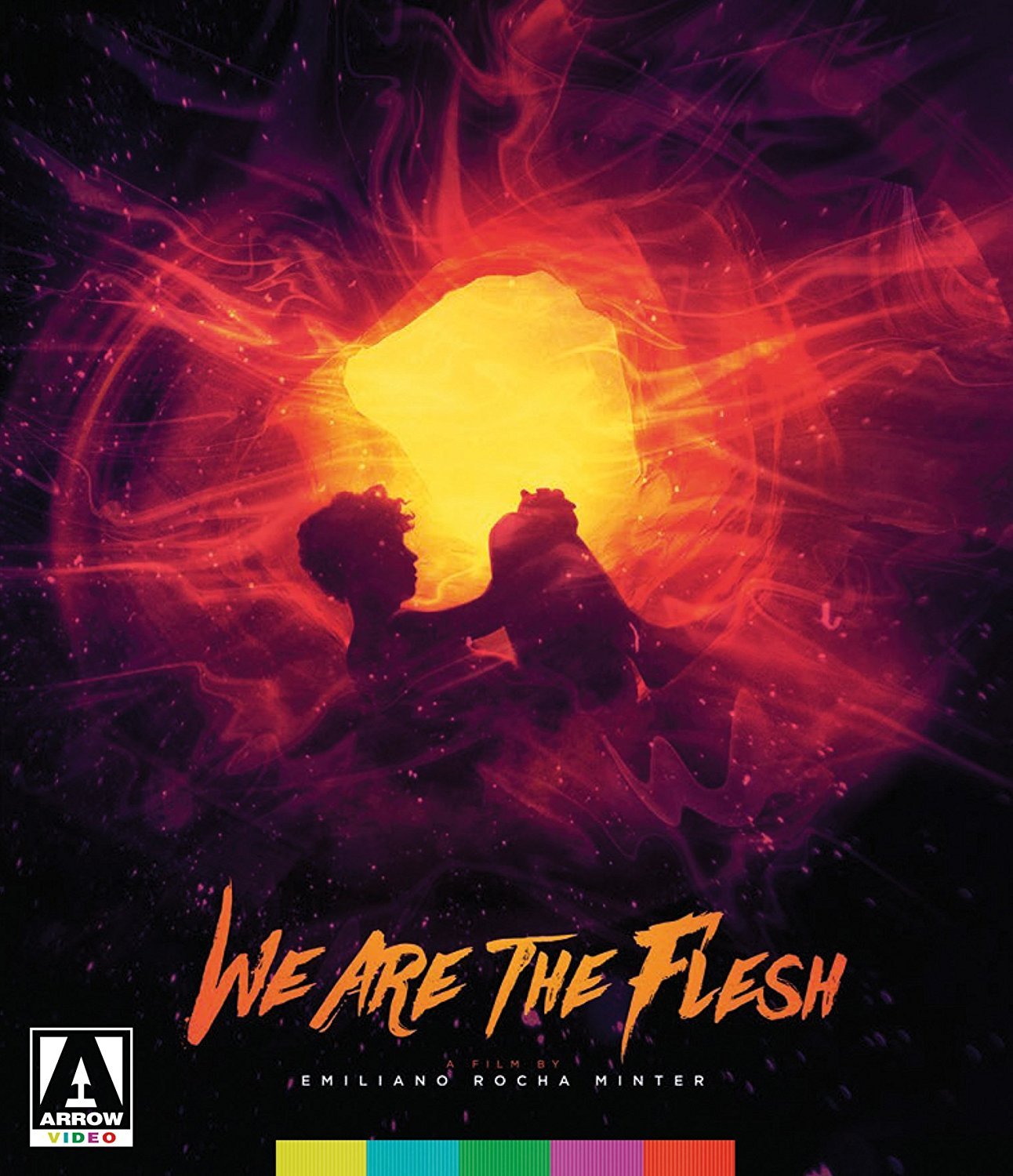 According to Georges Bataille, “Pleasure only starts once the worm has got into the fruit.” A similar notion concerning the attraction of corruption lies at the dark and cankered heart of writer-director Emiliano Rocha Minter’s outrageous We Are the Flesh. What ostensibly begins as a grubby post-apocalyptic saga of survival at any cost slowly and strangely morphs into a nightmare of sex, death, and rebirth. The film seems intent on keeping viewers on their toes with its disconcerting shifts in tone, fluctuating aspect ratios, and escalating acts of sexual depravity. We Are the Flesh ultimately establishes itself as a metaphorical space—akin to the gargantuan uterine grotto its three leads cobble together out of laths and soggy cardboard—in which the trio can freely envision and indulge what their demented ringleader, Mariano (Noé Hernández), terms their “darkest fantasies.”

The film remains ambiguous about the precise family relations between Mariano and his young charges. Fauna (María Evoli) and Lucio (Diego Gamaliel) claim they’re sister and brother; at one point, Fauna imagines herself playing with Mariano as a child. Literal or figurative, this (post-)nuclear family seems primed to explode under the tutelage of the clearly unhinged older man, who’s prone to self-medication straight from the dropper. So it comes as little surprise when Mariano promptly initiates the siblings into transgressive realms of incest and eventually murder. While the violence is fairly tame by today’s torture-porn-besotted standards, the sex is as graphic as anything in producer Carlos Reygadas’s own Battle in Heaven.

We Are the Flesh’s early scenes tend to linger over process, whether that’s the relatively realistic act of lashing together the readymade womb-room, or the far more bizarre spectacle of Mariano doing his bonkers Little Drummer Boy routine. The film establishes a hypnotic rhythm through razor-stropped editing and a reverberant sound design that later scenes will disrupt with alarming impunity. Rocha Minter keeps the camera moving throughout: predatorily circling the actors, steadily pushing in for dramatic effect, even executing some delirious 360-degree axial tilts. As the film descends through varieties of altered psychic states, approaching at last the hothouse delirium of a fever dream, its palette shifts from drab industrial to vibrant hues that bathe the set in swathes of blue and orange.

The film’s second half has a more syncopated cadence, as events continue to elide the boundaries between reality and imagination. From its psychosexual explorations to its one-set location, We Are the Flesh is rigorously interiorized. Which isn’t to say the film lacks for social commentary, however abstract it may seem. The voluntary blood sacrifice of a Mexican soldier (Gabino Rodríguez) is ironically accompanied by a rendition of the national anthem, calling into question that old chestnut about it being sweet and decorous to die for the fatherland. The twist ending posits the film as an overt allegory for life in contemporary Mexico—and it’s a little too on-the-nose for all that.

Rocha Minter’s fervid imagination seems to have been steeped in the literary canons of decadence and surrealism. In interviews, the filmmaker has name-dropped Bataille and Lautréamont; indeed, the film’s catalogue of perversities wouldn’t be out of place in one of the Marquis de Sade’s frothier works. Because We Are the Flesh is Rocha Minter’s debut, it can’t help but wear his influences on its sleeve. The stylized mise-en-scène suggests the fusion of art and anatomy in Masumura Yasuzô’s gonzo Blind Beast. The exploration of uninhibited (not to mention unsimulated) carnality owes much to Gaspar Noé’s films, while the characters’ penchant for histrionic freak-outs bears an uncanny resemblance to Andrzej Zulawski’s Possession. And the gleefully carnivorous (and possibly blasphemous) finale aligns it with Jorge Michel Grau’s similarly titled tale of urban cannibalism We Are What We Are.

Arrow Video’s 1080p/AVC-encoded transfer looks altogether comparable to the film’s theatrical presentation. Granted, this isn’t an overly bright film, but fine details come across well, and the washes of color (especially once we move into the cavernous womb construction) are fairly dense and well-defined. Black levels are variable, according to the predominant lighting schemes. The 5.1 surround mix is admirably immersive, situating those ominously reverberating sound effects and the metallic clangor of Esteban Aldrete’s discordant soundtrack with some depth and dynamic discreteness.

Rocha Minter’s early films reveal hints of the distinctive vision that would be articulated more fully in his debut feature. Dentro shares We Are the Flesh’s early preoccupation with process as two young men silently collaborate on an enigmatic construction in the middle of the woods, whose purpose is elliptically revealed only in the final shot. Videohome cuts between bizarre domestic tableaux with a rhythm that mirrors the increasingly fetishistic and sexual behavior on display. Critic Virginie Sélavy’s video essay does a fine job of situating We Are the Flesh in the context of Antonin Artaud’s theater of cruelty and the surreal, ritualistic films of Alejandro Jodorowsky. Interviews with Rocha Minter and his three leads tend to focus on the unconventional audition and rehearsal process. Oddly enough, Noé Hernández and Diego Gamaliel both say they still haven’t seen the finished film.

Emiliano Rocha Minter’s outrageously transgressive We Are the Flesh gets a solid transfer and some instructive extras from Arrow Video.