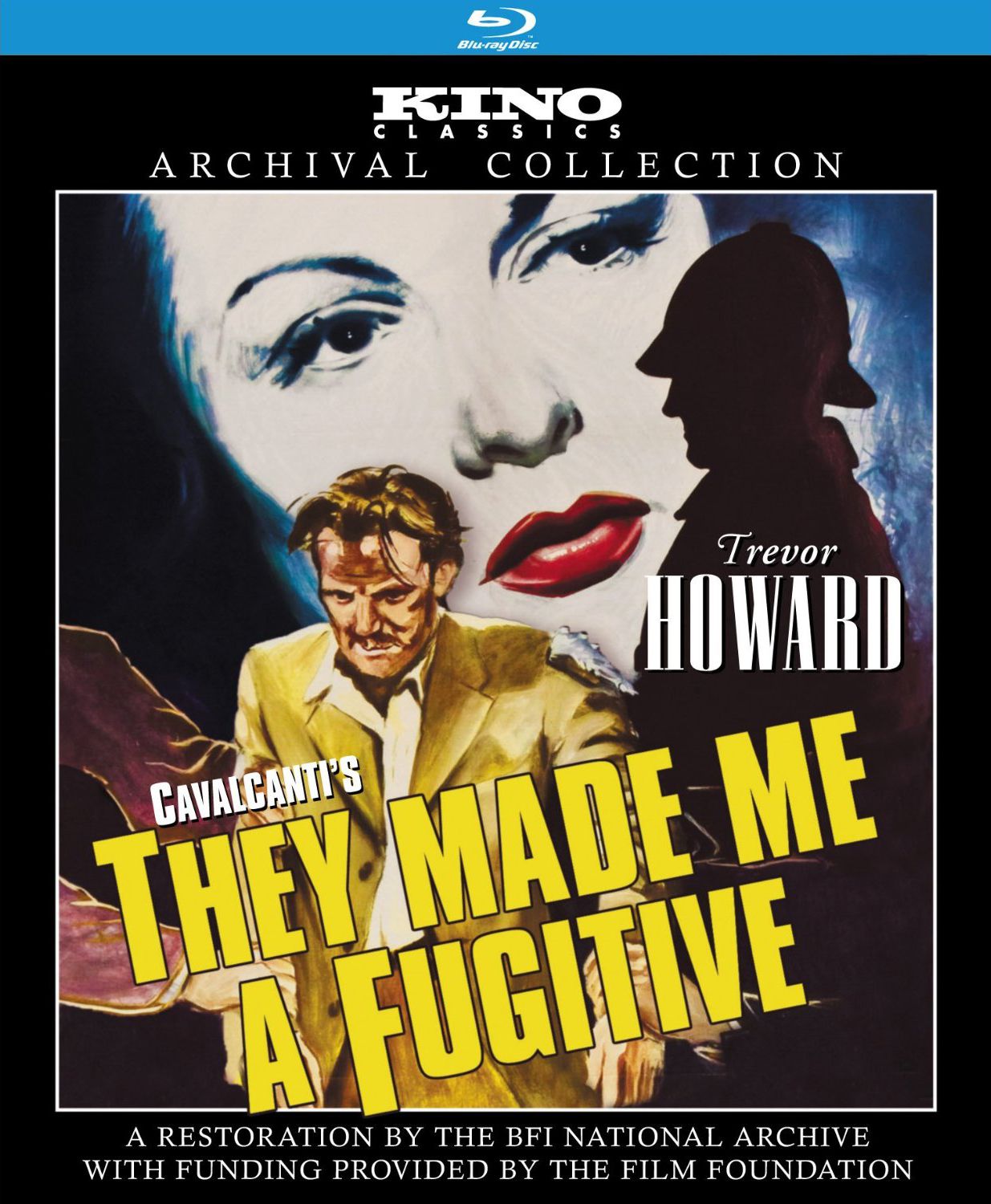 Hardnosed and hardboiled, They Made Me a Fugitive is a cracking good crime drama out of England that regrettably tends to get overshadowed by two towering postwar classics, a pair of films that likewise hybridize film noir’s pessimistic vision of human fallibility and the so-called spiv film’s distinctly British preoccupation with petty criminality and black-marketeering: Carol Reed’s The Third Man and Jules Dassin’s Night and the City. Trevor Howard stars in They Made Me a Fugitive as Clem Morgan, a former RAF pilot who gets mixed up in criminal mischief out of a profound sense of boredom. He wants, as he says, nothing more than to keep doing what the military taught him to do while in uniform, now that he’s out of it.

Clem gets recruited into a black-market smuggling operation led by Narcy (Griffith Jones), one of the classic noir heavies, charming and urbane on the face of it, yet possessing a penchant for brutality and betrayal. The man’s very nickname, short for Narcissus, signals his arrogance and pathological self-absorption. Clem soon enough wants out of the racket when he finds out the gang’s smuggling more than cigarettes and rotgut, discovering packets of cocaine tucked away in the coffins they use to transport their swag. Rather than let him go, Narcy frames Clem for killing a cop during an aborted heist.

In a brilliant stroke, Narcy’s gang operates out of the Valhalla funeral home. Business placards hanging about (declaring, “It’s later than you think” and “Death is always around the corner”) add welcome touches of macabre humor, recalling Cavalcanti’s contribution to the portmanteau horror film Dead of Night (a loopy segment starring Michael Redgrave and a ventriloquist’s dummy). As well, the locale sets the stage for the whizz-bang finale, when Narcy stashes a couple of his thugs in empty coffins to lay in wait for Clem, and thereafter its roof (complete with massive letters that spell out R.I.P.) provides a decidedly Hitchcockian spot for the climactic showdown between Clem and Narcy.

They Made Me a Fugitive indicates that it’s not only the criminal element that profits from social corruption. Even the middle class wants in on the action. When Clem escapes prison and seeks shelter in a rural homestead, the lady of the house, Mrs. Fenshaw (Vida Hope), tries to persuade Clem to bump off her boozer husband. When he indignantly refuses, she uses the firearm he’s just handled to do the job herself. Though it contributes little to the unfolding narrative, apart from turning up the heat under the escaped convict as another murder’s pinned on him, Mrs. Fenshaw’s opportunism and murderous streak speak volumes about the film’s moral universe.

Once he’s on the lam, Narcy’s former girlfriend, Sally (Sally Gray), decides to help Clem, a decision prompted as much by the vicious beating Narcy gives her as by anything Clem has to offer. The film’s final act evolves into a shadowy cat-and-mouse pursuit as Narcy and the coppers close in on the one stoolie who can prove Clem’s innocence, and Clem in turn trails Narcy back to the Valhalla. The ending is prototypically downbeat, even allowing for Sally’s noble gesture, agreeing (despite Clem’s wishes) to wait for him to serve out his sentence. Clem heads back to stir, submitting his case to the endless red tape of official bureaucracy his only hope for clemency. Given the chance to clear Clem’s name, the dying Narcy seems to speak the film’s final malediction as he gasps out, “I hope you both rot in hell.”

A professional expatriate, Brazilian-born Alberto Cavalcanti’s background was accordingly multifarious. While in France during the late 1920s he made the experimental Rien Que les Heures, an early example of the city symphony film. Throughout the 1930s, he contributed to a number of patriotic British documentaries while a member of John Grierson’s GPO production unit. They Made Me a Fugitive combines these approaches: the documentarian’s attentive eye for surface detail and “gritty authenticity” stands alongside extravagant flourishes like the whirling camera and distorted funhouse mirror shots in the scene where Narcy assaults Sally in her dressing room. Likewise, veteran cameraman Otto Heller’s visuals mix the verisimilitude of location shooting and the flagrant artificiality of stylized sets and interiors like the Valhalla’s coffin-littered backroom.

Restored in 2009 by the BFI, They Made Me a Fugitive looks, all things considered, pretty smashing on Blu-ray. There’s some softness and murk, and vertical blemishes crop up fairly frequently, but more often than not the blacks stand out in their inky depths, and the occasional deep-focus shots still astound. The mono LPCM track is fair to middling for what it is, but owing to the actors’ often thick accents and the script’s predilection for underworld argot, some subtitles would have been appreciated.

Trailers for other Kino Classics titles available on Blu-ray.

A slam-bang Brit noir makes its way onto Blu-ray looking fresher than ever but with nothing in the way of extras.