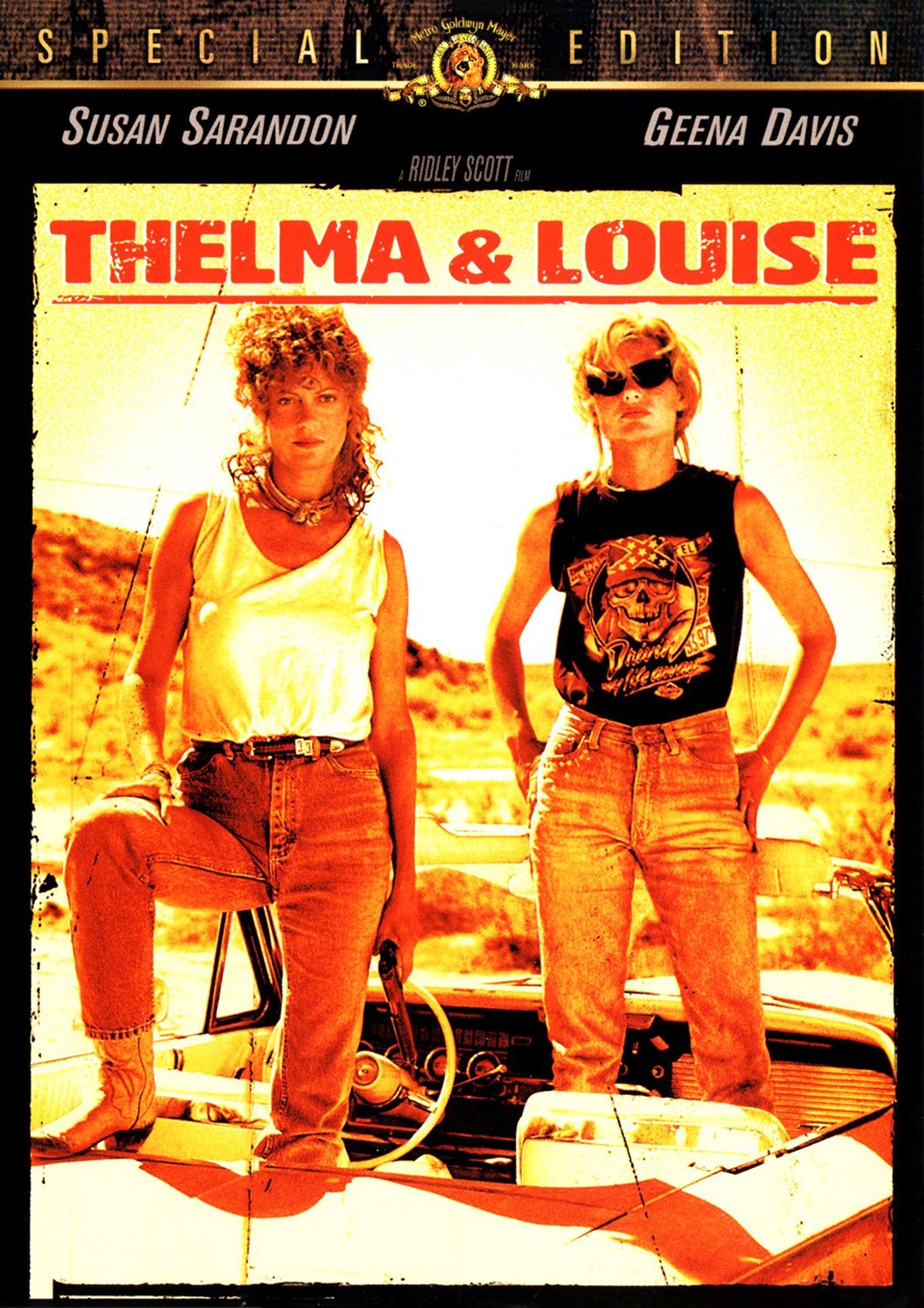 One of Thelma & Louise’s many scumbag men refers to the film’s troublemaking titular heroines as “You bitches from hell!” It’s a telling summation of ditzy Thelma (Geena Davis) and maternal Louise (Susan Sarandon), two mild-mannered nobodies-turned-desperadoes whose odyssey across the Southwest in the summer of 1991 made them feminist icons for a generation of women. But what stands out more than anything about Ridley Scott’s epic of estrogen empowerment is how transparently one-sided its look at male-female relations remains 12 years later. Thelma & Louise go on the run for killing a drunken prick who tried to rape Thelma in a bar parking lot; regardless of whether this despicable lout deserved to died, what’s shocking is that he’s portrayed as the typical late-20th century guy. From Thelma’s buffoonish husband Darryl (Christopher McDonald) to hunky thief J.D. (Brad Pitt) and Louise’s greaser boyfriend Jimmy (Michael Madsen), every man in the film is either an untrustworthy smooth operator, a slick romantic with latent violent tendencies, or an abusive monster with a passion for brutality or domination, and it’s this kind of clear cut black-and-white world which Scott and screenwriter Callie Khouri’s ladies revolt against.

The film’s only decent male figure is Harvey Keitel’s Hal Slocumb, the compassionate Arkansas cop who’s hot on the duo’s trail, but—as befitting a story that presents testosterone as a dangerous enemy of female independence—he’s barely heard from except during police procedural sequences in which he interviews suspects, taps phone lines, and argues with superiors in an unconvincing Southern accent. Scott’s widescreen compositions capture the expansiveness of the heat-soaked Southwest plains; however, with the exception of a stunning Joan of Arc-inspired ending, Scott’s gift for slick visual splendor is wasted on a run-of-the-mill Bonnie and Clyde-ish tale posing as profound social statement. Thelma & Louise’s crime spree is a symbolic rejection of the oppressed victim status men have forced women to accept, and, as a result of Davis and Sarandon’s commanding performances, is frequently an exhilarating ride. Yet because the only way these outlaw martyrs can reclaim their freedom is to nobly strike back against a society characterized by male-propagated sexism and objectification—in one of many instances of overkill, a truck driver, besides simply gesturing obscenely to the women, even has mud flaps with silvery nude women decals protecting his truck’s tires—Thelma & Louise’s feminist call to arms winds up sounding woefully simple-minded.

MGM’s new Thelma & Louise: Special Edition boasts a brand-new 2.35:1 anamorphic widescreen transfer that, with a few exceptions, is about as good as one might hope. Flesh tones are natural and color reproduction is solid, though a few instances of slight fading do appear from time to time. Contrast levels are sharp, and image detail is-for a film 12 years old-impressive. Blacks are inky, but it’s a shame to find that shadow delineation is uneven, with some shadows obscuring detail to an unacceptable degree (both actresses’ faces become a bit smudgy leading up to the climax). A regular smattering of debris is noticeable, but minimal edge enhancement and a generally sparkling image makes this transfer a success. The Dolby Digital 5.1 soundtrack isn’t as active as today’s mixes, and directional effects are kept to a bare minimum. Nonetheless, despite its mediocre dimensionality, the track’s strong fidelity, surprisingly powerful bass, decent surround sound action and solid dialogue reproduction make it a more than adequate audio option.

MGM’s exhaustive single-disc special edition features a boatload of extras, highlighted by two full-length audio commentaries. The first is with director Ridley Scott, and is the same track that appeared on MGM’s original DVD release of the film. As one might expect, Scott is well-versed when it comes to the technical aspects of filmmaking, detailing how many sequences were filmed, how locations were chosen, how hot it was while filming, and his experience working with the actresses. What he doesn’t discuss, unfortunately, is the film’s story or the ensuing controversy that engulfed the film, making his discussion pretty dull going (unless, of course, you’re interested in learning how to remake the film). Fortunately, a second commentary track featuring screenwriter Callie Khouri, Geena Davis and Susan Sarandon makes up for the first commentary’s deficiencies. The three women spend a good deal of time refuting claims that the film promotes violence or is a man-hating manifesto, and the discussion gets pretty heated at certain points. That said, their comments occasionally veer off course, and their tangents-relating production anecdotes that aren’t very funny or insightful-drag down what is, overall, a very lively commentary.

Also on Side A of this two-sided disc are sixteen deleted/extended scenes, which range from a few full scenes not included in the final cut to a host of expanded scenes featuring extra lines of dialogue. None are very interesting-one scene simply features Harvey Keitel’s cop walking up to an apartment building through sprinklers-but MGM has thankfully included a Deleted Footage Marker (which appears as the subtitle track) that indicates which portions of the expanded scenes didn’t make it into the finished film. An extended ending with commentary by Scott-also from the previous DVD release-features a slightly different, and worse, take on the finale.

Side B begins with the all-new documentary Thelma & Louise: The Last Journey. Split up into three parts (although you can watch the whole thing using the Play All feature), the doc covers every aspect of the film, from its origins as a Callie Khouri project to its production and its eventual success. Primarily composed of new interviews and production footage, this feature benefits immensely from the participation of almost everyone who worked on the film: Scott, Khouri, Davis, Sarandon, Pitt, Stephen Tobolowsky, Christopher McDonald, Michael Madsen, Jason Beghe, producer Mimi Polk Gitlin, and composer Hans Zimmer all chime in with their memories of working on the project. At roughly 45 minutes, it’s the single best supplement on the disc. An original theatrical featurette-in other words, an annoying promotional press kit for the film-is also included and, in a twist I’ve yet to see on any other DVD, can be watched with the overblown (and obvious) narration turned off. Multi-angle storyboards allow viewers to compare Sherman Labby’s drawings of the final chase sequence with footage from the film, and twelve photo galleries house every kind of production photo imaginable (including promotional artwork). Glen Frey’s awful “Part of You, Part of Me” music video is, for reasons unknown, included, and rounding out the set are three television commercials, the film’s original theatrical trailer, its home video commercial, and a trailer for Scott’s Hannibal.

MGM’s Thelma & Louise: Special Edition is one of the year’s best discs, if for no other reason than because it expertly presents Christopher McDonald’s hilariously bushy moustache in all its unkempt glory.