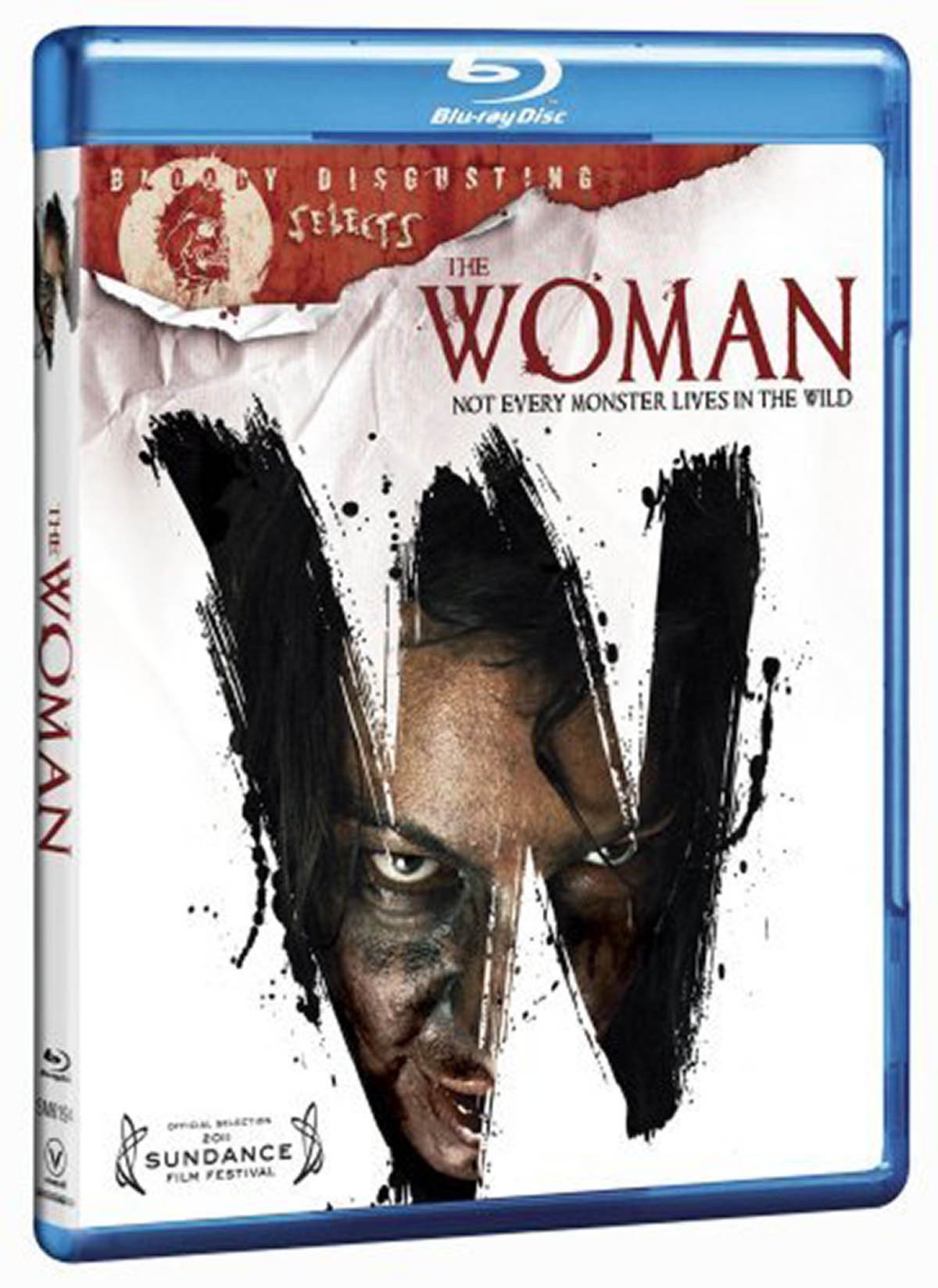 For the horror fan it’ll be hard to watch The Woman without drawing mental comparisons to The Girl Next Door, a disturbing film based on an even more disturbing novel by Jack Ketchum. The Woman’s story, which director Lucky McKee worked on with Ketchum, might even be consciously similar. Chris Cleek (Sean Bridgers), a successful middle-aged guy with a barely concealed streak of sadism, is out on a weekend hunt and happens upon a feral woman (Pollyanna McIntosh) bathing in a creek. A plan immediately springs to mind, and so Chris rushes back to his beautiful and remote home ordering his family—wife Belle (Angela Bettis), son Brian (Zach Rand), and daughters Peggy (Lauren Ashley Carter) and Darlin’ (Shyla Molhusen)—to clean all the junk out of the cellar for the surprise that soon awaits them. That surprise, of course, is the Woman, who Chris captures and imprisons with the intention of “civilizing” her.

This is strongly upsetting material for a horror film, the kind of story that’s loaded with at least six term papers’ worth of various dissertations on man’s egotistical attempt to control the uncontrollable and the hypocrisy of American middle-class society as embodied by the still prevailing, if more insidious, inequality of the sexes. McKee and Ketchum are aware of the potential subtexts and probably several others that aren’t immediately obvious, but they’re most interested in the power play between the genders. We know from the opening that Chris is a self-entitled bully, but it’s gradually revealed that he’s a monster. Belle is a cowardly, impassive witness the filmmakers clearly view with contempt; she’s only a step or two above those awful little boys who let the girl next door die a slow, god-awful death. Belle is really Chris’s waif slave. Brian is Chris’s protégé, a monster in the making who clearly can’t wait to get his hands on the woman, probably after his father, the head of the house, has had his fair and due turn. Peggy is the not-quite-woman in moral transit; she must choose, in her dealings with the Woman, whether she’s going to submit like Belle or take a stand. Darlin’, just a little girl, is primarily around to allow the awfulness that unfolds to be that much more awful. The Woman, meanwhile, signifies id, rage, unconditioned sexuality, perseverance, violated nature and basically anything else you wish to attach to her. (If you think the Woman’s bare and shapely breasts somehow play a role in Chris’s sudden gesture of feigned goodwill you’re on the right track.) She also embodies the kind of strength with which Chris refuses to believe the fair sex is capable—a belief that will eventually provoke a reckoning.

The plot indicates just how diagrammed The Woman is, which dilutes the horror that an admittedly less skillfully made film like The Girl Next Door achieves. Every character is a thematic signpost, and it seems inconceivable to the film that a man might be a decent fellow or that a woman who isn’t a beast, with one plot-convenient exception, might be something other than a simpering victim. Everything that happens throughout the film is meant to prove a preordained point about the dominant male ugliness that our society readily takes for granted, and, while I’m hard pressed to disagree with that idea, I began to chafe at McKee and Ketchum’s persistent nudging.

There are obviously major horror films with rigged views of human nature that are still masterpieces of shocking visceral immediacy. McKee, however, doesn’t yet have the authority to conceal his puppet strings so that we may buy into what we’re seeing. Horror fans, particularly on the festival circuit, have been championing McKee as the next big thing since his debut with May, another film that had (less pronounced) feminist concerns. Though McKee is a gifted stylist (The Woman has a compelling and beautifully warm, open look), he’s also hemmed in by self-consciousness. It’s clear that he wants this film, one of a number of collaborations with an author he clearly reveres, to really add up to something primal and powerful. Almost every shot is held too long in an overstated bid for portent, botching the spontaneity of scenes that could sting, such as a moment when the Woman appeals to Belle for help. And McKee is wobbly with tone even on his own blunt terms. At times, such as in the eerie pre-title scene, The Woman would appear to be striving for a mood of heightened fairy-tale evil a la David Lynch, but that mood is often disrupted with a number of distracting, sometimes jokey montages set to songs, many written specifically for the film, that literalize the action on the screen.

The Woman isn’t successful, but it shouldn’t be discounted either, as this is a legitimately ambitious and promising American horror movie in a cultural climate that mostly presents torture and various other atrocities as game shows. McKee’s quite careful and aware of the story’s potential to become a disgusting masturbatory fantasy, and he shoots the most sensational material with a decency that’s admirable—though one has to wonder a little why this supposedly feral woman would be a stone cold hottie who’s a sponge bath away from a Playboy spread. You occasionally get hints of the movie that might’ve been, as McKee is clearly capable of getting the effects he’s after when he steps back a little. It’s telling that the most unsettling scene in the film is a quiet bit when Chris slaps Belle, lightly, as she tries to gently dissuade him from his approaching cruelty—a weird, shocking moment that succinctly reinforces the extent of this family’s emotional damage. In a few instances McKee isn’t just a smart director writing an essay on Gender Politics in American Society as Manifested in the Horror Film; he’s actually scared, and so, briefly, are you.

The colors really pop on this disc, but not in the ostentatiously polished fashion that sometimes mars Blu-ray transfers of horror films. In fact, the polish here contributes to the film’s idea of banal middle-class evil. The browns are purposefully a little soft, supporting the earthiness of some of the settings which contrasts nicely with the sharp, hard whites of the scenes set in office buildings and backyard barbecues. This transfer offers a very eye-pleasing image, and the sound sports a similar attention to detail. The clinks of bullet casings are as well mixed as the songs that often comment on the action, while the voices are properly synched and balanced well with the score.

“The Making of The Woman” actually presents information on how the film was made as opposed to the usual self-congratulatory cast and crew testimonials. In 25 minutes you get a succinct overview of the inspiration for the film, the selection of the actors, the construction of the sets, the synching of sound effects, as well as an excerpt of a Sundance viewer’s enraged reaction. Nice work. The other extras, though, are mostly disposable. The deleted scenes are unremarkable beats removed from existing scenes, with the exception of one bit that provides a little extra and unnecessary character motivation. “Mi Burro” is a somewhat amusing six-minute feature whose relevance to The Woman eludes me. (I assume it appeared on a character’s TV in the background as an in-joke at some point, but I don’t recall it.) Sean Spillane’s “Distracted” is one of the (better) songs written specifically for the film, and its inclusion as a separate extra is obviously meant as a promotion for the soundtrack. The extras are generally ingratiating, if slim, but a filmmaker’s commentary would’ve been nice considering McKee and Ketchum’s obvious enthusiasm for the project.

Lucky McKee fans should generally be pleased with this beautiful Blu-ray transfer of his ambitious, uneven new horror film.