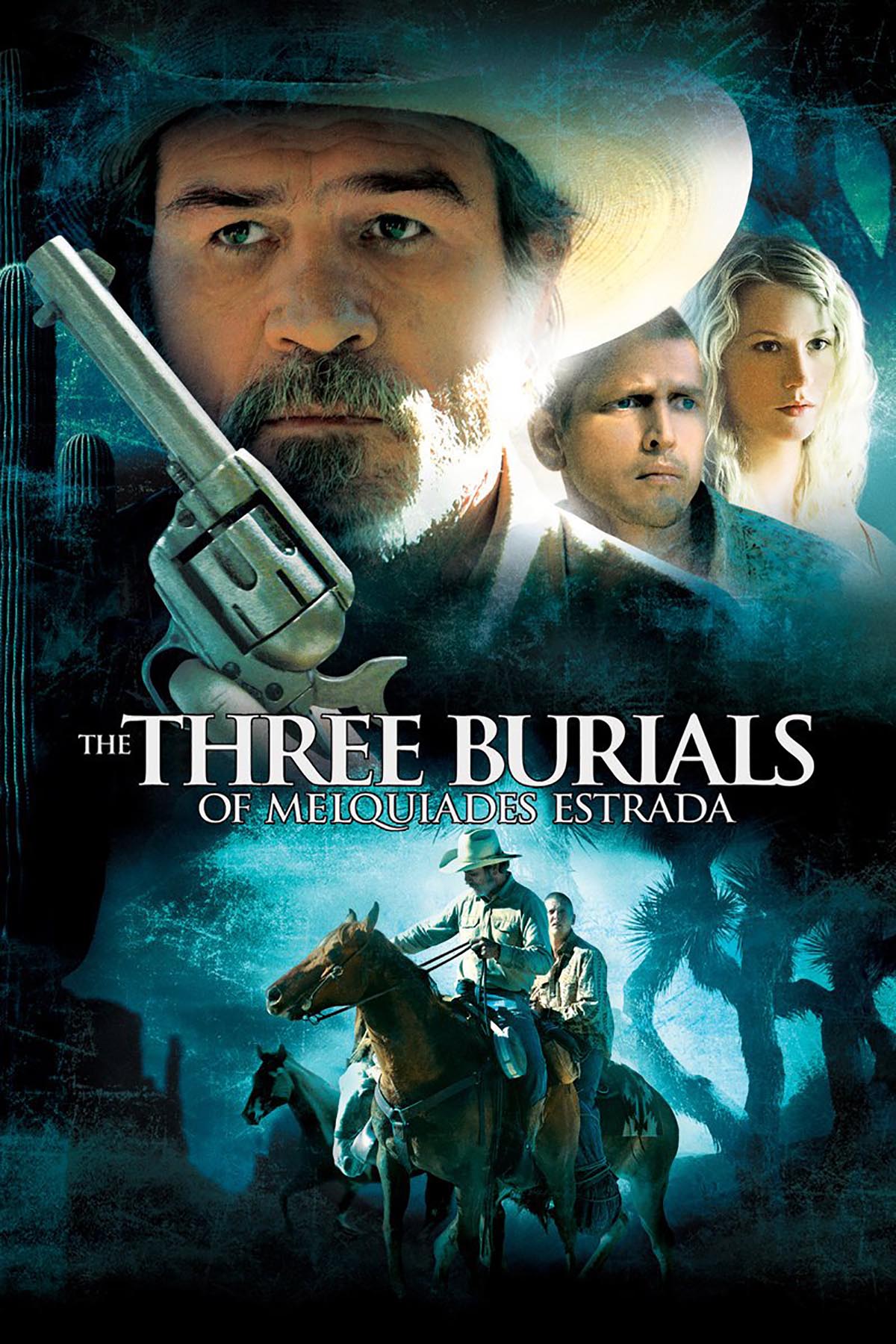 Passively cantankerous by its name alone, The Three Burials of Melquiades Estrada would probably not be titled such unless filmmaker Tommy Lee Jones purposefully intended for English-language speakers to struggle with pronouncing it. The prevalent lack of understanding between the United States and its neighbor Mexico is the bedrock of Jones’s melancholic modern western, a grim homily on border culture convincing in its indignation but cut short of gravitas by screenwriter Guillermo Arriaga’s periodic stacking of the deck. Jones plays Pete Perkins, a Texas ranch foreman wracked with overwhelming sadness after the unresolved shooting death of his close friend and hired hand, a soft-spoken illegal named Melquiades Estrada (Julio César Cedillo). On a tip from a flinty local waitress (the great character actress Melissa Leo), Pete uncovers that the Estrada’s murderer was border patrolman Mike Norton (Barry Pepper) and enacts a vigilante punishment—kidnapping him at gunpoint in the dark of night, forcing him to exhume Estrada’s corpse and make the miles-long journey on horseback across the border to provide a proper burial in his native Mexican village.

Recalling Clint Eastwood’s heartbreaking (and also self-directed) performance in Million Dollar Baby, Jones carries Pete’s weight of grief but without betraying the character’s emotional impenetrability or slack conscience. Using his unsmiling, carved-wood face and low-grade growl to maximum effect, Jones shrewdly allows the tragic undercurrent of Pete’s moral compromise to manifest itself, so that ultimately we realize that even if Mike can be redeemed, Pete will forever be a man adrift. Operating as a two-hander, the film needed a smarter, more instinctual actor than Pepper, noisy and obvious, for what could have been a blisteringly metaphoric role. As lazily characterized by Arriaga, he is merely a loathsome, sexually self-possessed buffoon who punches women in the face and masturbates to Hustler. Mike is the vessel for much of the audience pandering, especially in scenes dealing with his comeuppance, but Three Burials sustains itself even despite those moments. In the film’s most challenging, idiosyncratic scene, the shadow of Mary Shelley looms when Pete and Mike come upon a blind hermit (played in a poignant miniature performance by drummer Levon Helm of The Band) with a odd request that uniquely tests Pete’s stubborn determination to set things right. How badly this little haiku of a scene could have been bungled—and isn’t—is a tribute to the movie’s rough poetry.

I’m not sure what the demand was for a full screen version of The Three Burials of Melquiades Estrada, but here it is unnecessarily sharing space on the same disc with the 2.35:1 presentation that honors the film’s original aspect ratio. Aside from the occasional edge enhancement, these are immaculate transfers. Audio is lush, with solid dialogue and atmospheric surrounds.

The commentary by Tommy Lee Jones, Dwight Yoakam, and January Jones is an epic snoozer, getting at nothing really unless you admire Jones for his resilience in wanting to keep the color titles that segment the film. Jones claims he wanted to evoke a Mexican-like feeling, but I imagine that went over your head.

The film’s color wheel is a little oversaturated, thus negating the grit Tommy Lee Jones was surely after, but the presentation is still pristine.