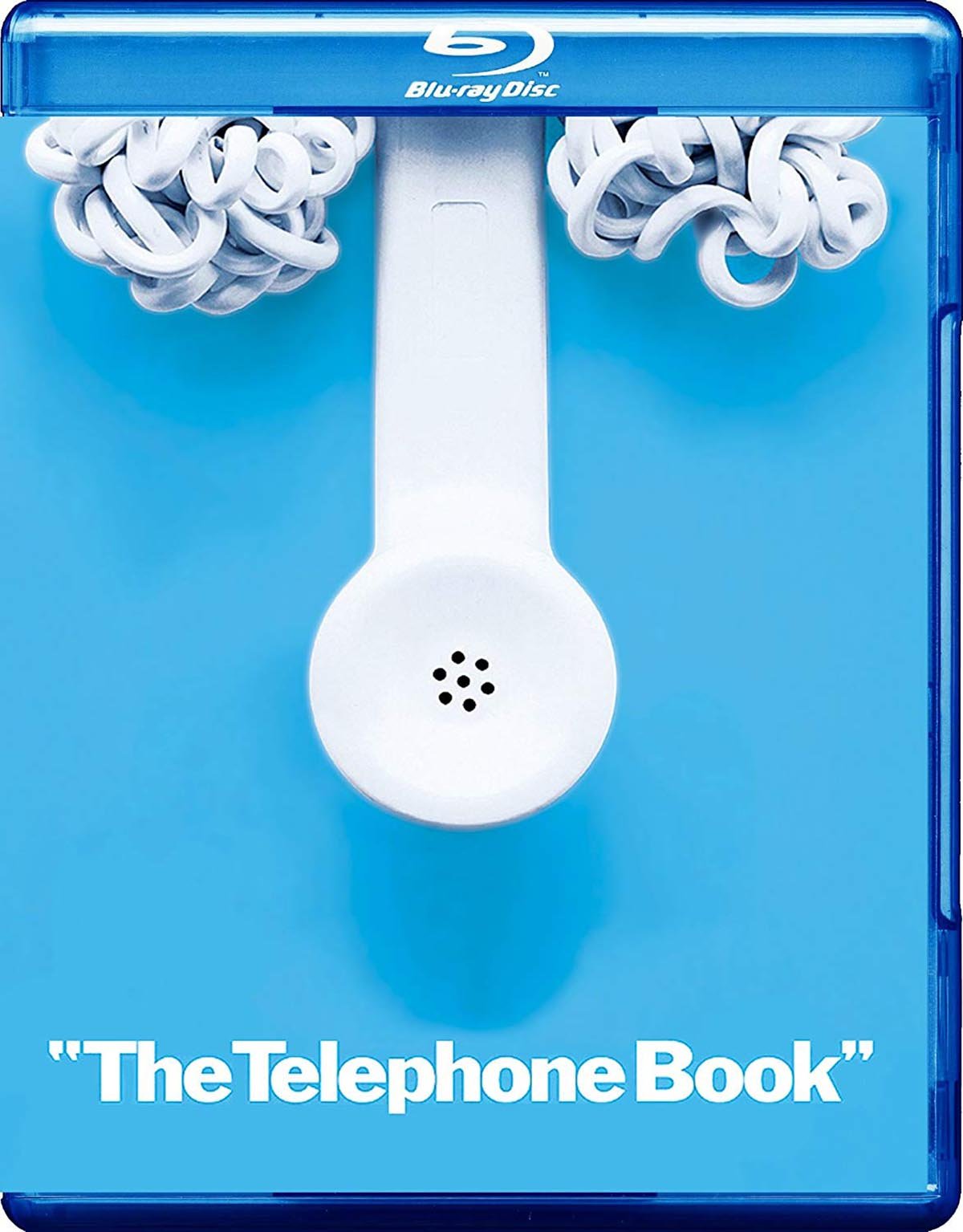 For a brief period in the late 1960s and early 1970s, after the relaxation of the Production Code and the implementation of the MPAA’s ratings system, and before the era of “porno chic” inundated screens with explicit hardcore pornography, the X rating stood for films that were aimed at mature audiences and often worked to push the boundaries with regard to depicting sex and violence, with controversial films like Midnight Cowboy and A Clockwork Orange serving as trailblazing test cases. It was also the time when underground filmmakers like Andy Warhol and Robert Downey Sr., characterized by their deconstructive treatment of narrative tectonics and screen time, were at the height of their mainstream popularity. Out of this heady brew emerged The Telephone Book—one part sexual romp, one part withering satire, and altogether a neglected cult-film time capsule of the era.

Novice writer-director Nelson Lyon clearly took a page from satirist Terry Southern’s playbook, employing outsized stereotypes and blatant provocation in order to unrelentingly poke at wounds festering in the body politic. With its episodic narrative structure, The Telephone Book plays like a more explicit variation on Southern and Mason Hoffenberg’s Candy, another picaresque satire masquerading as sexual odyssey. Following helium-voiced gamine Alice (Sarah Kennedy) on her quest to encounter in person “the world’s greatest obscene caller,” Lyon brilliantly captures the atmosphere of political enervation and erotic estrangement blanketing the nation after the collective come-down of the sexual revolution in the face of President Nixon’s faceless “silent majority.”

Alice’s milieu—an apartment wallpapered in softcore photos and carpeted with dirty magazines—speaks directly to her dilemma: gratification sought and not found, where even Dial-A-Prayer offers precious little solace. “What we have here,” like the man said, “is a failure to communicate.” So Alice is doubly roused by the priapic pyrotechnics of an obscene caller who readily identifies himself as John Smith (played, in a brilliant casting coup, by advertising voiceover stalwart Norman Rose). Smith presents Alice with the prospect of real connection when he challenges her, “I’m in the book. Find me.”

Given the protagonist’s name, it’s clear that Lyon also drew inspiration from the surreal dreamscapes in Lewis Carroll’s books. Carroll’s Alice had run-ins with the Mad Hatter and Caterpillar. Tracking down Smith’s various namesakes, Lyon’s Alice runs across a veritable who’s who of cranks and deviants. With subversive intent, Lyon peppers the film with faces that would have been familiar to contemporary audiences from their television work, including Barry Morse (The Fugitive) as Har Poon, self-purported inventor of the stag film, and Roger C. Carmel (Star Trek) as a portly shrink with a fondness for fingering his waist-mounted coin dispenser. Elsewhere, Lyon cashes in on his acquaintance with Warhol and the Factory crowd, giving small parts to Ultra Violet as a whip-wielding woman and Ondine as an on-screen narrator who hypocritically decries the film’s prurient aspects, all while the camera slowly tracks out to reveal a naked man sprawled facedown across his desk.

Scattered throughout the narrative proper are a series of talking-head commentaries delivered by “recovering” obscene callers. These vignettes are pitch-perfect gems of absurdist monologue, seamlessly blending scripted dialogue with flashes of improvisation. The thrust of these speeches is to insinuate that what these people come up with to occupy their time, once they’re cured of their relatively harmless fetish, is bound to be a whole lot worse. There’s the burly itinerant salesman who touts “inner calm” at the prospect of immanent invasion by little green men from Atlantis; the demure housewife whose uses for overripe bananas are startling indeed; the self-professed creep who inadvertently stumbles on the liberating potential of the obscene call. “I said ‘Fuck you!’ And they didn’t hang up. It was terrific.”

From a structural standpoint, these cutaways help to break up the long scene in which Alice finally meets John Smith, who turns up at her apartment wearing a pig mask to obscure his identity. At Alice’s prompting, Smith delivers what amounts to a one-act monologue about his development into a verbal virtuoso of smut. Lyon wisely breaks the scene up visually, shifting locations around Alice’s digs, interspersing stylized shots of Smith framed by parts of Alice’s anatomy (as though she were little more than furniture from the Korova milk bar), as well as visualizing aspects of Smith’s account. Via Smith’s metaphorical unmasking, Lyon takes the wrecking ball to just about every aspect of middle-class American iconography, defiling along the way God, government, family, even NASA. It’s one of the great satirical set pieces in the history of American cinema.

In the end, Alice’s request is simple, recalling the final line of Kubrick’s equally despairing Eyes Wide Shut: “Fuck me.” To which, hangdog, Smith replies, “I can’t.” And so they adjourn to adjacent phone booths in the heart of the city, as The Telephone Book shifts into its most shamelessly blatant visualization yet: obscene animation (in color even) designed by Len Glasser to resemble the R. Crumb. Disembodied breasts atop dancing legs, giant robot women fucking skyscrapers, serpentine lapping tongues that lick and thrust with cocksure abandon, all accompanied by a cacophony of hideously sibilant slurping sounds. Words truly beggar this eye-popping sequence. Ultimately, the aftermath of Alice’s encounter with the Ulysses of perverts will leave viewers in wonderland. Slumped inert against the glass, Alice appears to be sated at last. But has she merely experienced what the French like to call the little death, or has she gone whole hog for the pig man?

The Telephone Book comprises the sole outing for cinematographer Leon Perera, who served his apprenticeship as camera operator for legendary DP Gordon Willis. It’s a shame that Perera never lensed another picture since he shows a real knack for shooting in high-contrast black and white. Credit for the film’s visual sophistication is also due to its editor, Len Saltzberg, who deploys many of the edgy New Hollywood techniques he’d learned working on John Schlesinger’s Midnight Cowboy. Struck from a reasonably well-preserved 35mm print, Vinegar Syndrome’s 1080p/AVC-encoded Blu-ray transfer is a sight to behold, with a panache that belies both its modest budget and sexploitation-fodder pigeonholing. As you might expect, there are a fair number of artifacts on display, as well as the occasional graininess (especially egregious in the concluding color footage), but all things considered The Telephone Book probably looks every bit as good as the day it opened at the Astor Theatre in Times Square. On the audio front, the Dolby Digital track is entirely appropriate for this type of down-and-dirty production, and it comes across perfectly legibly.

By far the best bonus feature is producer Merv Bloch’s articulate and often wryly amusing commentary track, moderated by cult-film historian Joe Rubin, a soup-to-nuts discussion that covers Bloch’s background as an ad man who designed campaigns for many high-profile studio films of the ’60s and ’70s, as well as just about every aspect of The Telephone Book’s conception, production, distribution, and reception. Bloch outlines his association with Nelson Lyon, who hitherto had worked for Bloch’s ad agency. The crew apparently gave Lyon the nickname Captain Smut due to his fondness for porn (hence the unusual décor in Alice’s apartment). Although the critical and commercial failure of The Telephone Book signaled the premature end of his career as a filmmaker, Lyon eventually got a gig writing for SNL in the early 1980s (alongside, coincidentally, his idol Terry Southern), where he was involved in the coke-fueled weekend binge that ended with the death of John Belushi, a happenstance that thereafter rendered Lyon persona non grata in Hollywood.

Bloch ends the track with an apposite anecdote: Sitting around a table in the Russian Tea Room waiting for the trade reviews, Bloch and Lyon found themselves seated next to Jack Nicholson and Peter Bogdanovich, whose The Last Picture Show opened the same day. Needless to say, response to the two films couldn’t have been more dissimilar. The New York Times’s third-stringer eviscerated The Telephone Book, while Bogdanovich’s film was well on its way to canonization. Elsewhere, the original theatrical trailer, which was designed by Bloch, presents a study in minimalism as it contains no actual footage from the film, whereas the trailer designed for the film’s reissue under the moniker Hot Number, in a futile attempt to cash in with the grindhouse circuit’s raincoat brigades, unsurprisingly amps up the sex and titillation. The stills gallery contains many priceless production shots, including a few depicting scenes that ended up on the cutting room floor.

A brilliant and lamentably neglected gem of early-’70s underground filmmaking, The Telephone Book gets the deluxe Blu-ray treatment from Vinegar Syndrome, with a sterling high-definition transfer as well as some choice extras.

Review: The Outer Limits: Season One on Kino Lorber Blu-ray