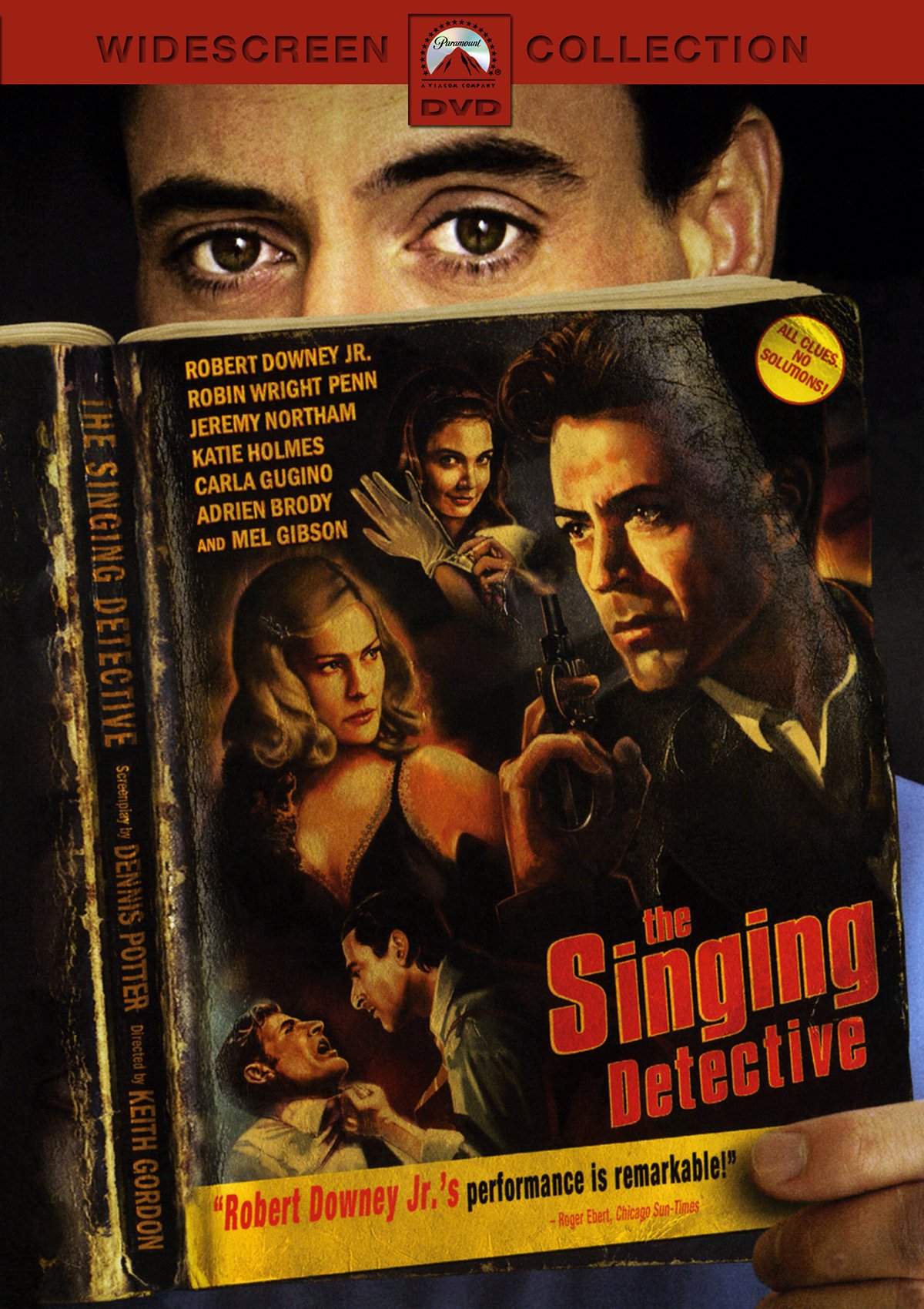 Confession: When faced with that inevitable question often posed to critics (“What’s your favorite movie of all time?”), I often avoid a direct answer by referencing the 1984 BBC mini-series The Singing Detective. Dennis Potter’s brilliant teleplay, Jon Amiel’s precise and humanistic direction, and Michael Gambon’s powerful central performance combine to form something quite profound. The film is a portrayal of a hospital bound man who sifts through his troubled past, and how that past informs not only his present misery but also his creative pursuits. The character, Philip Marlow, wrote hard-boiled detective novels but dreamed deeper, more complex dreams that fused sex, relationships, desire, religion, family, music, and art. It was a Proustian melodrama filtered through earthiness and pulp, musicals and psychotherapy, and, like a darker and more earthbound variation on Casablanca, rediscovered idealism.

That’s a tall order to follow, let alone improve upon. The late Mr. Potter wrote a feature film version of his epic series, not intending to distill the material but to create something new. (He felt that MGM’s misguided truncation of his previous BBC mini-series Pennies From Heaven was an utter disaster.) Thank heaven he never lived to see Keith Gordon’s interpretation of his script, though it’s unlikely that anyone could have shaped anything successful out of this kind of material. The character of Marlow, now called Dan Dark (Robert Downey Jr.), is a hateful, misanthropic, prudish bastard with a crippling skin-and-bone disease called psoriatic arthropathy. It locks him prisoner in his fevered body and deeply disturbed mind. He’s a tough character to get behind—brilliant but savage. It would take a mini-series to empathize with him and discover the person under that rage, and a two-hour feature film doesn’t cut it. In Gordon’s The Singing Detective, Dark is a hateful cynic and we’re never allowed enough time with him to fully understand why.

It’s unfair to compare this new version to the mini-series, as they’re clearly intended as two different animals. But this Singing Detective rushes headlong through its material, leaping back and forth between Dark’s childhood (a sun-baked, arid Los Angeles of the 1950s), his present (a too-bright, white hospital filled with grotesque doctors and nurses), his fantasies (perverse musical numbers that infect his cramped hospital room and transform them into bare-bones studio sets for nubile dancing girls), and his pulp fiction novel (a noir landscape as minimalist as Dogville, where Dark has the central role as a tough-talking private eye). Those multiple levels all blend together into a repulsive haze, all seen through cinematographer Tom Richmond’s broad color schemes and a distorting wide-angle lens. The entirety of Gordon’s Singing Detective is a nightmare, and one so over-the-top and outlandish it’s difficult to find any humanity buried beneath. The stylized performances create a Brechtian distance from the material, without adding Brecht’s moral and philosophical considerations.

Dark grows up as a child in what looks like the Old West, though it’s a 1950s gas station out in the middle of nowhere. His mother (Carla Gugino) has an affair with his father’s greasy business partner (Jeremy Northam), and young Dark witnesses the act. This infects his hard-boiled prose, and the clues to unlocking that traumatic memory lie embedded in his work. Unfortunately, the film reveals this memory early on, and as such there’s no mystery or epiphany waiting to be unlocked. Dark’s tearful confession of what he saw feels dishonest because he’s not opening his heart; he’s merely recycling material. (The BBC original offered a different confession, one having to do with misappropriated childhood cruelty brought on by a mother’s adultery, a father’s passivity, and a child’s fear—a more intricate and insightful portrait of guilt.)

Potter’s gaze into the man’s dark sexual and familial secrets isn’t about one man’s oppression, but about his self-imposed melodrama. When he gets to the root of his troubles through the help of a psychiatrist (Mel Gibson, hamming it up in a weird and unctuous performance), it’s a pat solution for all that nightmare imagery Gordon gluts the audience with. The music is an amalgam of 1950s pop tunes, but the lyrics don’t inform the actions on-screen. “How Much Is That Doggie In the Window” plays over and over again, but it feels more like a self-conscious quirk than an actual comment on imprisonment. Downey throws himself into the musical numbers with gusto, but Gordon’s stylistic choice of presenting them as if the walls were closing in limits the possibilities of what a musical number can be. Even within the wide-angle cinematography, everything feels squashed.

The Singing Detective is tedious to sit through mostly because its every moment feels so painfully misguided. Potter frequently delved into the grotesque, but his work almost demanded that directors play the material straight and, to a certain degree, natural. Gordon is one of best American filmmakers working today (his Mother Night and Waking the Dead are sublime cinematic gems awaiting rediscovery), but he goes out on an odd surrealistic limb here when he might have done better to show some restraint. Downey is one of the finest actors working today, but his performance feels stilted and broad (both as the shrieking hospital patient and the cynical detective). Potter’s script makes a muddled translation from restrained wartime-inspired Britain to Jet Set Americana.

These three artists (who we might call geniuses) go pretty far awry with The Singing Detective. Perhaps, then, it takes a special kind of genius to make something so awe-inspiringly awful as this. Like Marlow’s sore, sickening flesh and taut bones, this one’s painful to endure, and if there’s any brilliance locked anywhere deep inside the film, it’s probably unattainable for the average moviegoer. Or, as Dan Dark says, “There are songs to sing, there are feelings to feel, there are thoughts to think. That makes three things, and you can’t do three things at the same time.” Here’s one that definitely got lost in translation.

Because the film’s noir scenes are extra-dark, some may be bothered by the lack of detail, but the blacks are deep and the colors are very elegant. On the flipside: Because the hospital sequences were deliberately over-lit using flourescents, the flaws in the image (mostly the occasional dirt and speck) are now more noticeable. Skin tones and colors are fine, but edge enhancement is noticeable throughout and the hospital scenes sometimes appear washed out.

A technical-leaning commentary by a thankfully energetic and pleasant sounding Keith Gordon and a collection of indie-friendly trailers: Northfork, And Now Ladies and Gentlemen and-get ready for this-the made-for-MTV flick Wuthering Heights.

Wouldn’t it have made more sense for Paramount to put Erika Christensen’s Wuthering Heights on the DVD for Beyond Borders instead?