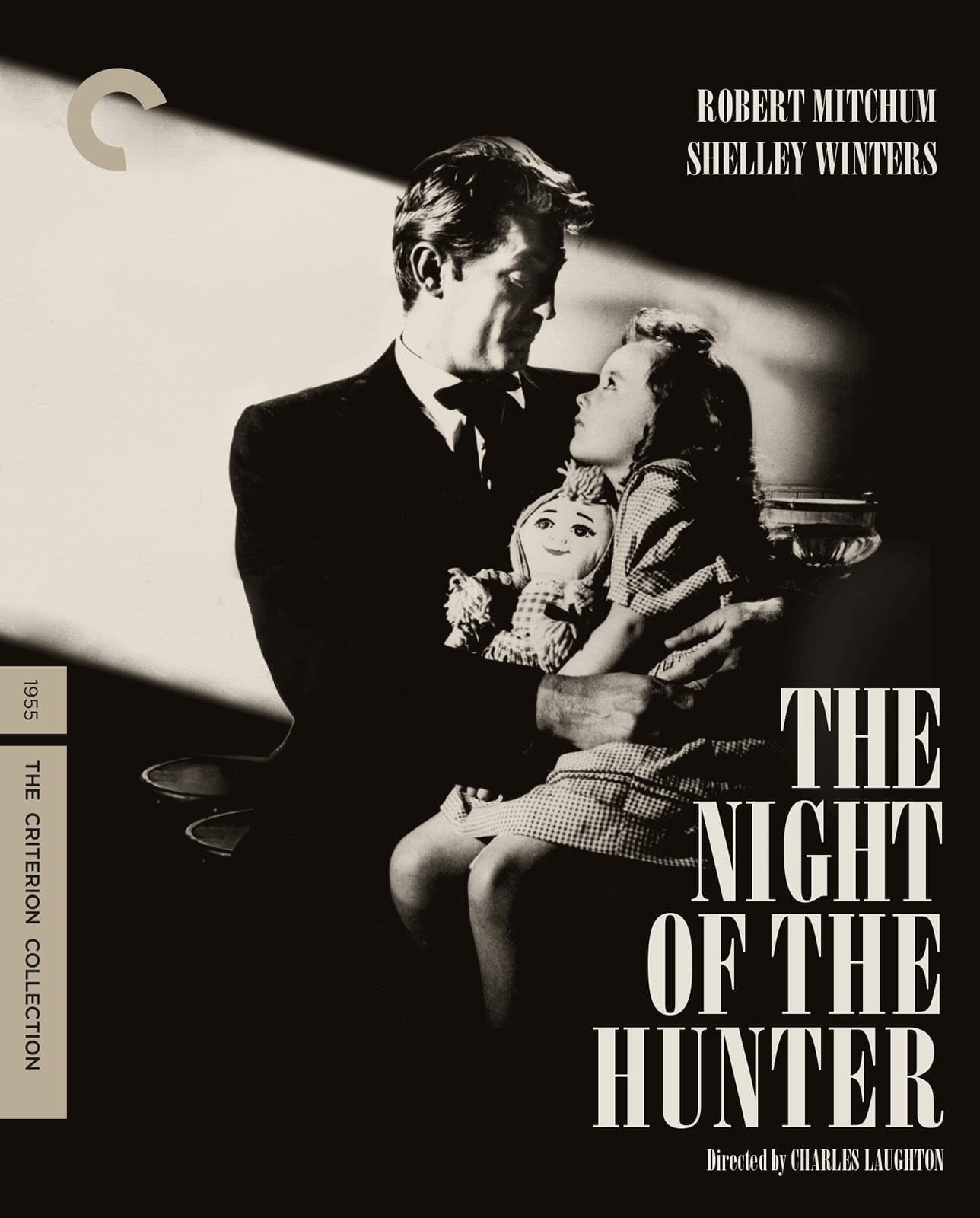 Charles Laughton’s The Night of the Hunter is so loaded with neurotic symbology that it can accommodate nearly any meaning any generation wishes to assign to it, and that’s the source of its uneasy, primordial power. In 1955, it might’ve been logical to assume that Laughton and critic turned screenwriter James Agee, working from David Grubb’s novel, were intending the film as an allegory for McCarthyism. After all, the villain, Reverend Harry Powell (Robert Mitchum), cannily exploits people’s panic in order to line his pockets, turning them on one another so as to distract them from the true evildoings being committed. Like those in the grip of the second Red Scare, most of Harry’s victims are easily exploited because they willingly forfeit individual judgment in the presence of reassuringly unquestioned leadership. As in other McCarthyism parables (most obviously Don Siegel’s Invasion of the Body Snatchers), only the children and the outcasts are able to see through the subterfuge of an encroaching menace. Everyone else is too well-practiced in subsuming rational thought for the sake of protocol.

Set in West Virginia in the 1930s at the height of the Great Depression, the film could just as easily be taken as a macabre, satirical celebration of the New Deal, as its eventual hero, Rachel Cooper (Lillian Gish), is revealed to be a little old spitfire of a lady who believes in the Lord as well as providing the rootless young children around her with the opportunities to learn trades that imbue them with hope of social betterment. Nearly 60 years after its initial release, The Night of the Hunter still resonates in a corporatized culture that prizes banally encouraging self-marketing jargon as distraction from the gradual legally sanctioned demise of the New Deal’s benefits.

The commonality in all of these interpretations, of course, is the expression of a profound distrust of authority. The Night of the Hunter is part of a movement of 1950s American films that were subversively concerned with the stifling properties of a mainstream culture that values consumerism and puritanical good behavior, as defined by straight empowered whites, at the expense of even rudimentary empathy. The film is a nightmare coming-of-age story that concerns a child who learns that adults (and, by extension, their rules) are not only fallible, but given to pronounced malevolence. John Harper (Billy Chapin) has barely processed the death of his murdering bank-robber father (Peter Graves) when he’s accosted by Harry over the whereabouts of his father’s hidden loot. John quickly sees Harry for the madman he is, but John’s mother, Willa (Shelly Winters), disastrously sees in the preacher a vessel for personal redemption.

The imagery heightens our impression of John and his little sister Pearl’s (Sally Jane Bruce) feelings of exclusion from society following the boy’s rude social awakening. Nearly every shot communicates a sense that the actors are pointedly divorced from their surroundings. Floating along the Ohio River on the run from Harry after he’s murdered their mother, John and Pearl can often be seen in the frame’s middle ground while wild animals, such as a frog or a hare, are framed (via composite shots) with striking clarity uncomfortably close to us in the foreground. Stanley Cortez’s cinematography evokes the surreal quality of Grimm fairy tales and the grammar of the silent films that inspired Laughton, but it most urgently affirms the children’s newly untethered emotional state.

This sense of exclusion from “proper society” is also prominent in the film’s strongest image. Right before Willa blurts out to Harry that she knows what he’s up to, and thus incurring her death, we see them in their bedroom from a distance, and only their bedroom, which is shaped like a steeple in a ghoulish joke that seems to have almost certainly informed Brian De Palma’s Carrie. The rest of the frame is lit pitch black, allowing us to explicitly discern that we’re watching a scene that was filmed on a set, which only intensifies our sense of Willa’s entrapment and fragility. When we later chillingly see the hair of Willa’s corpse floating up toward the sun from the bottom of the river, we suspect that she’s ironically attained the freedom she sought.

Like Willa, Harry’s also entrapped in a puritanical prison. The iconic “LOVE” and “HATE” tattoos on his fingers are the subject of a variety of surprisingly explicit double entendres that revolve around his simultaneous revulsion and excitement with the opposite sex. He’s a Jungian device that symbolizes the urges that are being repressed by collective society—particularly the sexually frustrated women, who often admittedly get the short end of Laughton’s empathetic imagination. Harry’s often shot as a dream figure, a looming Big Bad Wolf who’s capable of descending on the children at any time, and, as in a dream, there are times when Harry should be able to catch the children, but can’t for reasons of perhaps divine intervention. Like a boogeyman, Harry’s power derives from the fear of the conformist populace, whenever he’s confronted, particularly by Rachel, he’s revealed to be a clod.

These associations of suppressed, confused yearning become more explicit in the context of Laughton’s own closeted sexuality, as well as his fascination with the Bible, and all its accompanying potentials for forgiveness and stark punishment, and with the Southern gothic tradition with which The Night of the Hunter most certainly belongs. Mitchum’s performance prevents us from dispassionately engaging with Harry merely as an assemblage of diverting and revelatory signifiers, though, as he’s too lively and uncontainable for that. The actor plays Harry not exactly as an evil deity, but as a self-entitled child who feels that he should have whatever he wants because he makes a pretense of being in the “god business” with the reverend shtick. Mitchum lets you see Harry’s absurdity, and thus his humanity, which only allows him to grow larger in your thoughts as a figure of terror, an agent of unquantifiable reckoning who reveals that faith is only as noble, or as diseased, as its practitioner.

The image is outstanding, particularly the rich blacks, but it doesn’t represent much of an improvement over the already superb disc that the Criterion Collection released four years earlier. The grain levels might be subtly cleaner, and the background images even clearer, but it’s negligible. This English LPCM 1.0 sounds a bit richer than the prior edition’s sound mix, particularly in terms of Walter Schumann’s lush and haunting score, but, once again, we’re talking very subtle improvements made over an already stellar presentation. Not worth a double-dip if you purchased the 2010 edition, but if you’re new to the film, this is an ideal initiation.

These are the same supplements that were included on the 2010 Criterion disc, but they justify the repetition. Casual movie fans will greatly enjoy the various documentaries that recount the story of the film’s making, which includes the collaboration of a number of reportedly temperamental legends such as director Charles Laughton, writer James Agee, and cinematographer Stanley Cortex, as well as the film’s entire exemplary cast. For the aspiring filmmaker or the more impassioned cinephile, however, there’s the two-and-a-half hour “Charles Laughton Directs The Night of the Hunter,” which is culled together from hours of outtakes that allow you to literally watch as the meticulous director shapes the tone of his actors’ performances. It’s one of the more revelatory filmed documents of an artist’s working methods that have ever been offered up for public consumption, and it reveals Laughton to be a shrewd taskmaster who knew how to gently massage actor egos as he requested take after take of even seemingly trivial exchanges. The audio commentary, featuring second-unit director Terry Sanders, film critic F.X. Feeney, archivist Robert Gitt, and author Preston Neal Jones, is an informative one-stop shop that covers most of the material included in the various other features over the course of the film’s trim running time. Rounding out the package is the trailer and a booklet featuring essays by critics Terrence Rafferty and Michael Sragow.

No need to double-dip if you already own Criterion’s first treatment of this intensely conflicted and resonant Southern gothic masterpiece, but this is a characteristically attentive package if you’re new on the scene.