In approaching his adaptation of Mario Puzo’s The Godfather, Francis Ford Coppola has said that he saw the story as “the tale of a great king,” Vito Corleone (Marlon Brando), who passed the best and worst of him to his three sons: passionate and aggressive Sonny (James Caan); sweet, childlike Fredo (John Cazale); and intelligent and cunning Michael (Al Pacino). Coppola’s archetypal sensibility is the hook that makes The Godfather trilogy so compelling, an emotional buttress that registers deeply through the thorny convolutions of each film’s narrative. Indeed, one of the remarkable things about The Godfather—commensurate with Brando’s marble-mouthed performance—is how the emotional clarity of this one family’s story so powerfully emanates through the soup of business and politics.

The Godfather sees the Corleone clan struggling to hold ground on a battlefield peppered with memorable antagonists: narcotics entrepreneur Virgil Sollozzo (Al Lettieri), corrupt police Captain Mark McCluskey (Sterling Hayden), duplicitous rival mafioso Emilio Barzini (Richard Conte), stubborn Hollywood producer Jack Woltz (John Marley), ruthless Las Vegas high roller Moe Greene (Alex Rocco), to say nothing of the sundry turncoats within the Corleone family. The film’s canvas is a crowded one, and at its center is a rite of passage: the aging Don Vito handing the reins of the family business over to the reluctant Michael, the black sheep who wants nothing more than to be part of the great American melting pot. During the film’s opening, which depicts the wedding of Vito’s daughter, Connie (Talia Shire), Michael is introduced to us in military fatigues, with his blond-haired, WASPy girlfriend, Kay Adams (Diane Keaton), on his arm. And by the film’s end, he’s embraced the shadows outside of bourgeois American life. As he says at the beginning of The Godfather Part II, officially sanctioned politics and nefarious organized crime are both part of the same hypocrisy.

Throughout Connie’s wedding, the vividness of Coppola’s characterizations allows us to quickly understand how this particular family learned to thrive in a distinct American subculture. Meanwhile, consigliere (and adopted Corleone son) Tom Hagen (Robert Duvall) exists to fill us in on the ins and outs of how New York’s crime families negotiate power. The gestures, glances, and tonal registers between siblings position The Godfather as a primal story of love and devotion between a father and his children, and how siblings square off with each other in trying to live up to their father’s regality. And as Caan’s ferocity plays off of Duvall’s lawyerly reason and Pacino’s exacting coolness, we’re effortlessly swept up in the intimate emotional currents that flow beneath the power machinations of a dynastic family.

Partly set in 1958, The Godfather: Part II amplifies this complicated interplay as Michael secures his criminal empire in Nevada’s casinos and works toward setting up operations in Havana. In a memorably winking scene, old-time capo Frank Pentangeli (Michael V. Gazzo) requests tarantella music to be played at the Corleone Lake Tahoe compound during the celebration of Michael’s son’s first communion, but the band instead plays “Pop Goes the Weasel.” Senator Pat Geary (G.D. Spradlin) gives a speech thanking Michael for his contributions to the state. Kay is pregnant with their third child, and Michael aims to have a family as propitious as his father’s. But there’s a revolution brewing in Cuba, and political committees are cracking down on the mafia. More intimately, Kay is distressed about bringing more children into an apparatus strewn with corruption. Dancing with Michael, she brings up a conversation they had in a scene from the first film. “You told me in five years the Corleone family would be completely legitimate. That was seven years ago.”

Michael’s conflicts in The Godfather: Part II are connected to the past as much as to the present. The burden of history is represented by the avuncular though treacherous Hyman Roth (Lee Strasberg), who did business with Michael’s father, and Frank, who’s uncomfortable with how Michael is straying from the family’s Sicilian roots. Also at the heart of the film is the story of the younger Vito (Robert De Niro), who finds himself embroiled in a war with the governing mafia chieftain Fanucci (Gastone Moschin) after arriving in America. Throughout, Michael’s spiritual entropy is intercut with Vito’s ascendancy 30 years earlier, and while both men act to preserve their families, it’s telling how Coppola contrasts the father’s warmth with the son’s sclerotic obtuseness (ironically akin to the patriarchs with whom Vito does battle). By the end, Vito’s power is secured, his fall into criminality established as the means by which he protects his family. Michael also secures his power, but at the cost of his brother Fredo’s life, as the latter unwittingly betrayed Michael by colluding with Roth.

The Godfather: Part II is as elegant as it is expansive, acutely perceptive and operatic in his high emotions. Its story is more complicated than that of the first film, almost to the precipice of becoming a muddle. For one, it’s never really made clear what exactly is going on between Fredo and Roth’s organization, other than securing some information about Michael’s compound for an assassination attempt, or what’s the backstory of Frank’s relationship to Roth’s malevolent partners, Tony (Danny Aiello) and Carmine Rosato (Carmine Caridi). But such muddiness doesn’t matter in a film so magnificently constructed, where the tenderness of De Niro’s Vito seems to linger through the conspiracies and betrayals woven by Michael, the now-dead father hanging over Michael’s final confrontation with Fredo, a scene where Cazale’s tremulous id almost bursts through the man’s forehead, voicing his demand for respect with an afterglow of understanding his own inadequacies. Michael looms and Fredo struggles to stand up for himself while still inextricably tied to his chair, and Coppola orchestrates one of the most dramatically compelling scenes in American cinema.

Released in 1990, The Godfather: Part III may be considered a tragi-ironic commentary on the cultural clout of the first two films, which influenced how the public thought about the mafia but also how the mafia thought about itself. Set in 1979—or a few years after the first two films were released—Coppola’s trilogy caper emphasizes a performativity in everyday life that was absent from the more authentic dramas of its predecessors. The story begins with a sham Catholic ritual for Michael, now a billionaire businessman, being given a papal pin “for his charitable work,” which in actuality relates to a shady transaction with Vatican bankers, and concludes with a staggering half-hour sequence in an opera house, with Coppola magnificently cutting between action off and on stage to the music of Mascagni.

Reality and performance grandly intersect throughout The Godfather: Part III, with the actors posturing like performers on a stage, as if they were indeed characters in an opera. Take the the grandiose gesturing between Shire’s Connie and volatile Corleone heir Vincent (Andy Garcia) as he takes her hand with gusto and kisses it. Or the “bella figura” Gotti-like Joey Zasa (Joe Mantegna) and how he loves to cavort in front of photographers and reporters, contributing to the spectacle of himself. Eli Wallach’s performance as the duplicitous Don Altobello may initially feel strenuously affected, but his theatrical magniloquence comes to feel more than apt; Coppola shows Altobello in his opera box singing and pantomiming along with the performers on stage, as if to say that there’s no demarcation between life and theater for this two-faced crook. Reconciling with Kay, Michael brings a knife to his throat and says, “Give me the order!” It’s then that Kay, the one figure who sees through Michael’s fronts, grimaces. He drops the knife and chuckles apologetically, “We’re in Sicily. It’s opera.”

The way Coppola and his actors approach performance brings up the controversy of Sofia Coppola’s casting as Michael’s doomed daughter, Mary. Her line readings are sometimes flat, and at other times awkward. But in contrast to the other players, she’s startlingly pure, her unseasoned candor making her tragic function in the story more heart-wrenching. There’s an unexpected feeling of truth as she delivers her last line (“Dad?”) on the steps outside the opera house, breaking up the theatrical masquerade over which Michael has presided. Coppola gives his tragedy a twist that goes beyond King Lear, one of his film’s models. Michael, unlike Lear weeping at the death of his beloved Cordelia, doesn’t die of grief. Rather, it’s implied that he lingers on for years, alone in the company of despair and sorrow.

Michael kneels at his slain daughter’s corpse and finally cracks, raising his head and howling his sorrow before passing out. The unchecked emotional nakedness is out of step with the rest of the trilogy, almost breaking the fourth wall. Keaton, Shire, Garcia, and George Hamilton’s characters suddenly break from their grieving and look at Michael with what feels like baffled surprise. Coppola’s trilogy begins by observing the charade of American ideals and institutions. He ends it outside a theater, the horror in Michael’s scream breaking apart the compound of lies and artifice this arch American criminal has built around his heart. In this one moment, the opera is over and the consequences of reality are made manifest. 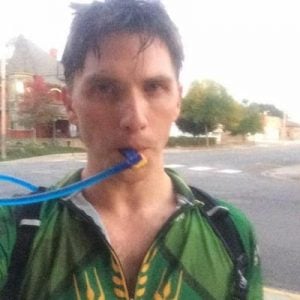