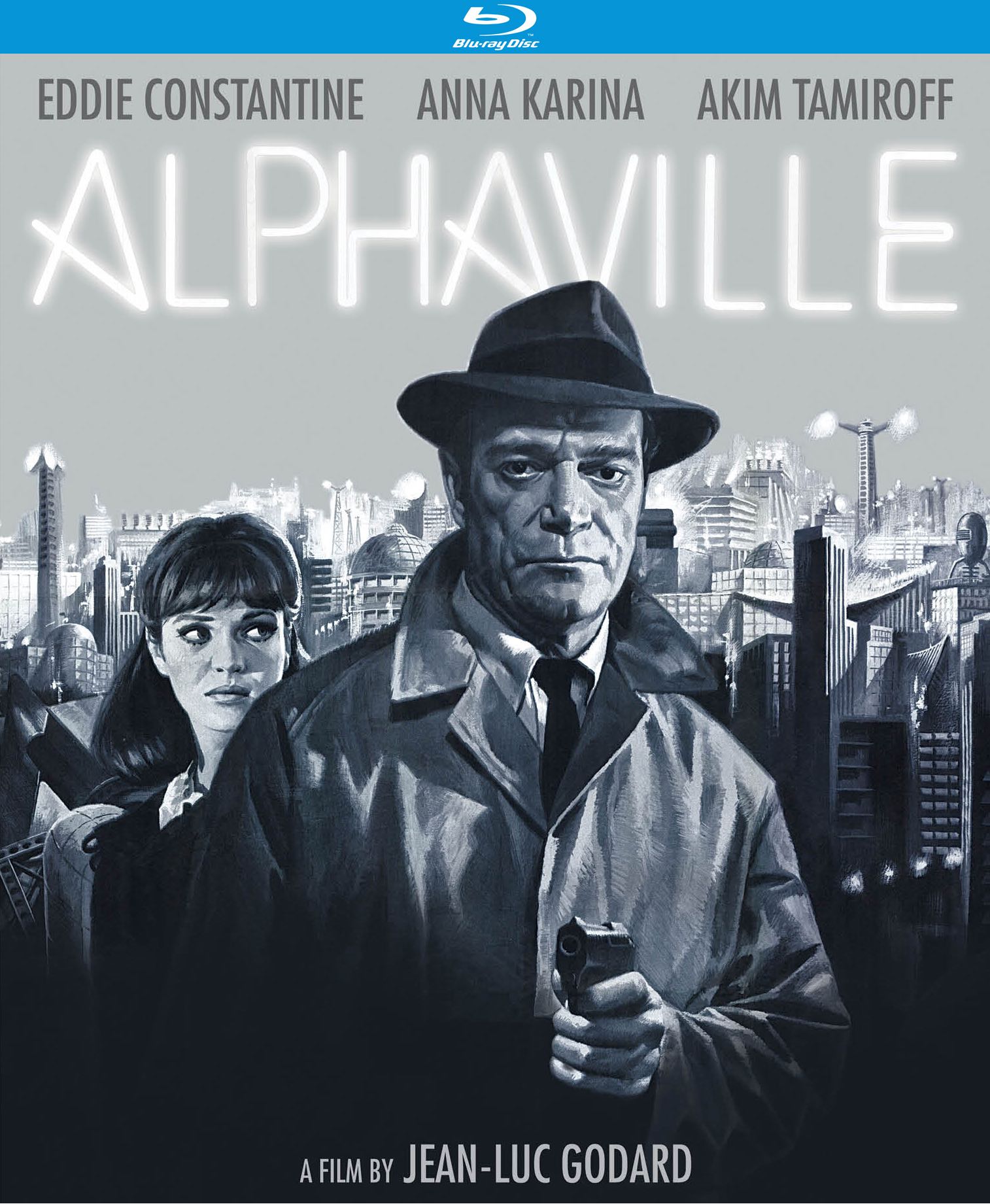 Much has been said of the overwhelming ingenuity of Jean-Luc Godard’s early films, but less so about just how well the director knew how to work around budgetary limitations. Alphaville, a dystopian sci-fi noir set in an Orwellian world of omnipresent surveillance run by a malevolent artificial intelligence, sounds at first blush like a large-scale work filled with the sort of macro world-building one typically sees in blockbusters. But Godard, working with next to no resources, captures the oppressiveness of totalitarian government through the claustrophobic conditions of repressed citizens. Ordinary Parisian streets and buildings are captured as they are, though in inky shadow, so that a certain kind of present-day dilapidation comes to suggest futuristic social decay.

Godard takes private detective Lemmy Caution and illustrates the film’s themes of social tension and incipient fascism by demolishing the man’s image. Godard secured Eddie Constantine, who had already played Caution in a number of films as a James Bond-esque rake whose chauvinism was portrayed as roguish and charming. Here, however, Constantine plays Caution as a somber has-been, a caustic loner in his twilight whose pathetic weariness is further emphasized by Godard forbidding the actor to wear makeup, preferring to capture every wrinkle and blemish on his face. When Godard does nominally adhere to the tropes one might expect from a Caution caper, the filmmaker does so in the most parodic of ways, as in an early action scene in which a hitman springs out of nowhere in Caution’s hotel room, leading to a brutal scuffle where all diegetic sound drops out and is replaced by elegant, lilting classical music, until noise comes crashing in as the would-be killer and hero are sent through a series of glass doors. It’s a gag worthy of a Jerry Lewis film.

In mixing elements of noir and science fiction, Godard doubles down on the existential horror of both genres, emphasizing their common emotional detachment through a narrative involving a supercomputer, Alpha 60, that rules over a realm, Alphaville, in which human emotions like love are punishable by death. That premise anticipates future tech-noir features like Leos Carax’s Mauvais Sang, and the rapport between Caution, so grizzled but still full of longing, and a thoroughly brainwashed, deadpan young woman, Natacha (Anna Karina), has the same kind of mutually dispassionate but compelling quasi-romance that Harrison Ford and Sean Young shared as androids performing love in Ridley Scott’s Blade Runner.

One of the least energetic of Godard’s New Wave films, Alphaville nonetheless evinces his puckish wit and allusive modernism. Caution frequently engages in conversations with Alpha 60, which articulates its thoughts through a growling voice box and decries human illogic while also largely reciting lines that Godard cribbed from the work of Jorge Luis Borges. In one scene, rebels who refuse to live in a world without love are executed by firing squad next to a pool where swimmers calmly perform laps below the machine-gun fire. At its heart, though, the film’s tension between emotion and logic epitomizes the early internal conflict of intellectualism and love that suffuses Godard’s early work. And, in one of the supercomputer’s Borges quotations, the film lays out the thesis that would undergird all phases of Godard’s search for unified truths: “Sometimes reality can be too complex to be conveyed by the spoken word. Legend remoulds it into a form that can be spread all across the world.”

Kino Lorber’s disc, sourced from a 4K transfer, is a revelatory presentation of a film that often seemed one of the least visually dynamic of Godard’s early career. Raoul Coutard’s cinematography, shot under incredibly difficult lighting conditions, has always appeared heavily grained and crushed on home video, but here the full beauty of his images is on fabulous display. Eddie Constantine and Anna Karina’s faces are rich with texture, blacks sink into abyssal levels of darkness without crushing, and outdoor location shot boast a healthy distribution of grain that never compromises detail. The robust-sounding audio is so clear that it’s now easier than ever to understand Alpha 60 supercomputer’s musings.

An audio commentary track by novelist and film historian Tim Lucas provides ample details about Alphaville and its place among both Godard’s filmography and the series of Lemmy Caution films, but Lucas’s dry, fact-based approach skirts a deeper, more formal analysis of Godard’s methods. A brief interview with Karina finds the actress recounting her memories of working on Alphaville. Most memorable is her amusing recollection that Coutard was so anxious about shooting in such dark lighting conditions that he couldn’t bear to look at the film’s dailies. An introduction by critic Colin McCabe provides a cursory but probing look into some of Godard’s techniques while not giving too much away.

Jean-Luc Godard’s sci-fi curio is a fascinating outlier in his New Wave period, and Kino’s Blu-ray brings its shoestring-budget beauty to life with an exceptional new transfer.

The Myth of the American Dream: Francis Ford Coppola’s The Godfather Trilogy