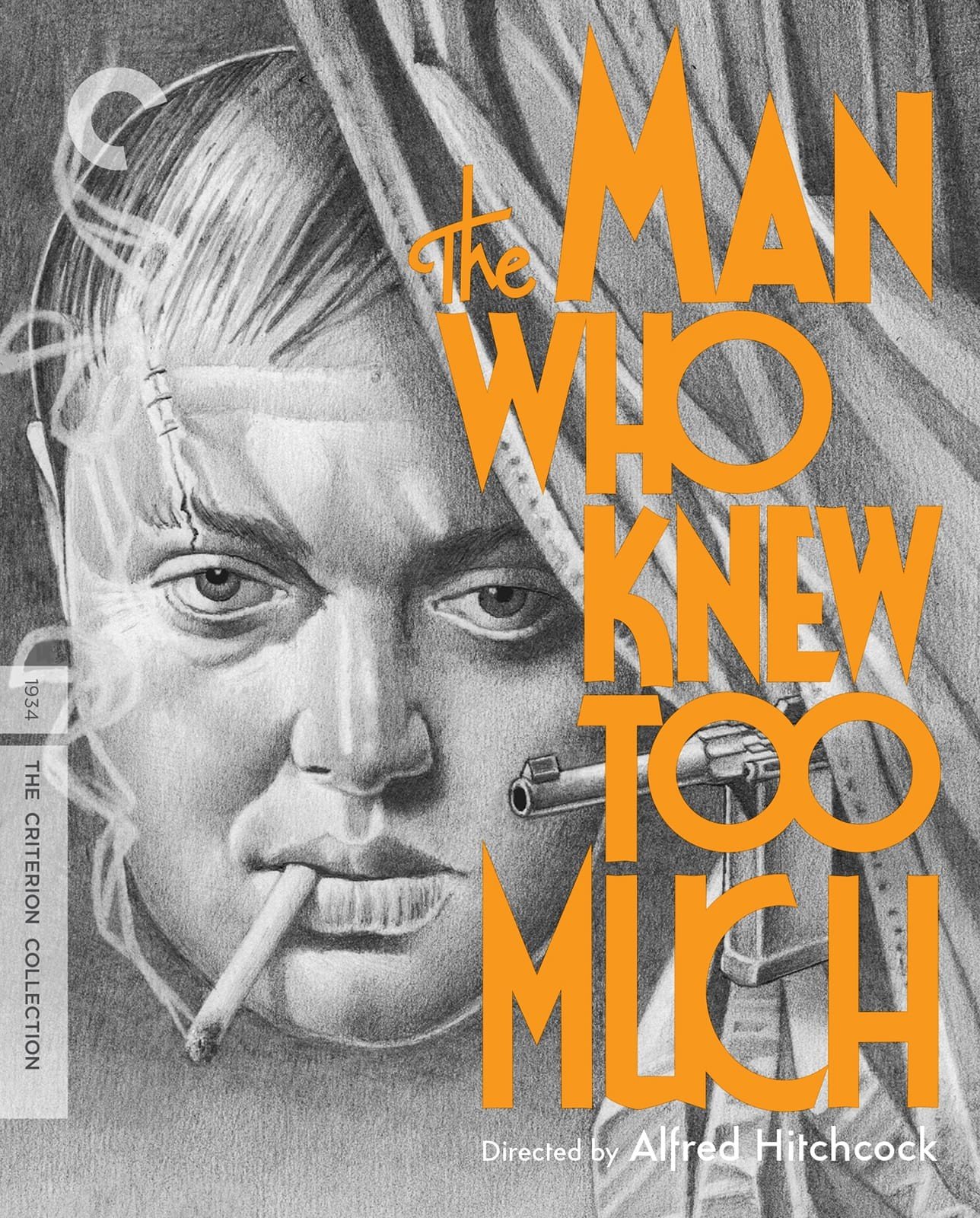 Produced in England in 1934, The Man Who Knew Too Much was perhaps the first of Alfred Hitchcock’s films to openly attempt the autonomously cinematic, aggressively syntactic perfection with which he would later become synonymous. Spiritually representative solely of what the camera, the sound rig, and the Moviola are capable, this tightly coiled thriller presents a working definition of cinema as life not only with the dull parts expurgated, but as life ornamented with uncanny physical implausibility. Early in the film the camera settles on a geometrically precise ring of index fingers quizzically surrounding a fresh bullet hole in a windowpane, a shot nearly Art Deco-like in its transparently composed tidiness. But this high-modern coolness nevertheless resonates; through it, Hitchcock evokes signs and symbols with enough intense broadness to become personalized for any given observer’s trauma-baggage. A shaft of light creeping up—caressing, if you will—the barrel of a gun as it protrudes from a curtain crimp offers the object luster while suggesting the sexual frisson Hitchcock is finessing out of the sequence. But whether the gun, which belongs to a political assassin, represents international rape or cross-cultural impregnation (the bullet is the hopeful seed that means to conceive a purposeful war) is your choice.

Hitchcock’s idealized approach to sound and image is furthermore syntactically oriented in the sense that the director clearly understands cinema as a language best spoken eloquently, even at the risk of haughtiness or of turning the characters into push-buttons mechanisms for tension- or sympathy-mongering. So when Jill Lawrence (Edna Best) discovers via ransom note that her daughter has been kidnapped while she and her wise-acre husband, Bob (Leslie Banks), are on holiday in the Alps, three crushing close-ups present the news to us along with tokens of her dread: There’s first a shot of the paper gripped tenuously in her hands, then of her eyes blankly scanning the sheet, and then, finally, of the words written on the note itself. The camera is, without mercy, “performing” the melody of alarm on the instrument of the woman’s suddenly shocked form.

Bob and Jill’s offspring has been stolen for reasons that are surprisingly convoluted for a movie that runs barely over an hour. While vacationing, the redolently middle-class couple befriends a dashing Frenchman (Pierre Fresnay) who turns out to a be a spy on the brink of foiling a political assassination plot; immediately before dying from an oppositional agent’s furtive gunshot, he passes on vital information about the scheme to Bob and Jill, a fact which runs them afoul of sadistic German operatives. (Peter Lorre, mumbling through his first English-speaking part, is their ringleader.) Fearing for their child’s life, the couple decides to take the law into their own hands, and begin prowling the streets of a lower-class area of London in search of both their daughter and further intelligence regarding the plot in which they’ve become embroiled. This vigilantism takes them not only to the precipice of their socio-economic caste, but also beyond it, into the realms of professionals and tax-exempt zealots that might as well be considered untouchable. (A memorable set piece takes place in a dentist’s office whose storefront features a giant model of human teeth; the Germans turn out to be hiding out above a bizarre church for “sun-worshippers.”)

Along the way, there are few European film styles of the ’20s and early ’30s Hitchcock doesn’t experiment with formally, the director not having had enough of a career to be self-referential as of yet, but none of them are mimicked with simple purity. We receive instead negotiations and refractions that blur the movie’s influences as sinisterly as a female German spy does the vision of Bob’s brother-in-law via hypnosis. There are scenes, for example, that look like Lang but feel like Buñuel; after Lorre’s spy captures Bob, the two engage in a lengthy, shadow-canopied conversation punctuated with lazy wine swigs and bread munches. And there are Lubitsch-style exchanges that might have been concatenated by Eisenstein, as in a sequence where Bob and a Swiss policeman confuse the word “here” with the word “Herr” while Jill is more seriously interrogated in the next room.

But what smoothes out this rocky rhythm of trial and error is the manner in which all of these dissonant devices get reduced to pure grammatical embellishments. Despite the quite lively and crucial soundtrack (the climax occurs during a symphony at Royal Albert Hall), the film’s narrative structure more closely resembles the episodic nature of silent-cinema storytelling, wherein an audience’s attention is held more in energetic spurts of situation than with long stretches of developmental fodder. Indeed, the dentistry sequence and the attempted assassination at Royal Albert Hall are as wackily incongruous as one could imagine two snippets of the same film being. But they’re both somehow independently effective in a manner that achieves slant-rhyme. This is perhaps the most maddening and yet most intoxicating aspect of Hitchcock’s cinema, and it’s first seen in The Man Who Knew Too Much: He rarely provides the same variety of perfection more than once, even in the same film.

The influence of German Expressionism on Alfred Hitchcock’s visual aesthetic was, frame-for-frame, at an all-time high when he made The Man Who Knew Too Much, and Criterion’s stellar 1080p transfer allows one to track the range of this influence quite literally frame-by-frame with unprecedented lucidity (only a handful of flecks compromise the otherwise pristine image). Hitchcock employs Robert Wiene-style set design (especially in the Lawrences’ rather surreally bourgeois flat; the walls of their absentee daughter’s room are painted with sinisterly lysergic swirls) and moralizing shadows a la Fritz Lang, of course, but the nimbleness of Karl Freund’s camerawork appears to have been studied as well. Regard, in particular, the subtle angle shifts managed throughout the third-act conversations between Peter Lorre and Leslie Banks, which become miniature gestures of the film’s constantly in-flux and fortune-reversing worldview. The lossless mono sound mix is also marvelously textured enough for the narrative significance of timbre itself to be properly gauged.

I love the Hitchcock/Truffaut tapes in all their stumbling, stammering, cross-translated glory as much as the next cinephile, but the excerpts included on this Blu-ray are a bit tedious—as is the case, it must be said, with most of Hitchcock’s assessments of his pre-Hollywood work during that legendary interview. There’s also a second interview here with Hitchcock, made for TV in the ’70s, which alternates between the director’s standard fluff (“What is Suspense?”) and his risibly cantankerous insights. (His takedown of method acting is particularly inspired.) But by far the most illuminating supplement is Guillermo del Toro’s lengthy “reading” of the film, wherein he annotates a collection of scenes with interpretations of Hitchcock’s “family values” and technical prowess. Future Criterion interviewees could do much worse than to ape del Toro’s colloquial incisiveness and easy familiarity with the material. (Like Eric Rohmer, he authored a book-length critical work on Hitchcock before becoming a director himself.) Rounding out the set is a cheeky restoration feaurette (“The Film That Warped Too Much!”), an exhaustive commentary with Philip Kemp that’s full of production notes and thematic suggestions, and a booklet with a characteristically shrewd appreciation by Farran Smith Nehme.

In high-definition, Hitch’s original The Man Who Knew Too Much is the epitome of film class in both senses.