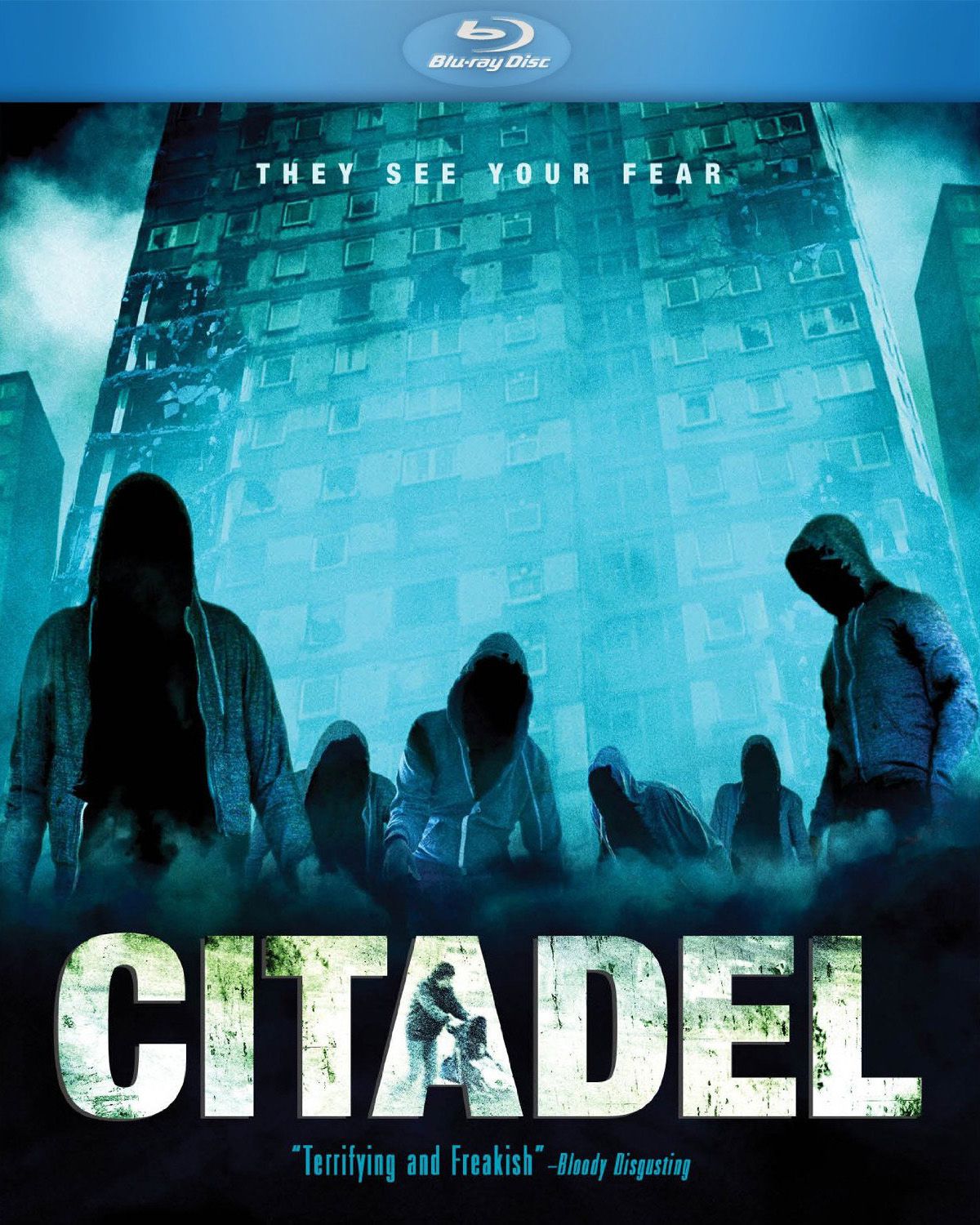 Ciaran Foy’s Citadel takes its place within a long, substantive tradition of horror films whose purpose is to ascribe motivations to the nebulous terrors lurking just beneath life’s veneer of comfort and complacency. The appeal lies in seeing social anxieties articulated as codified spectacle: Fear becomes conventional and therefore entirely appropriate, a response governed by—and commensurate to—the tenets of the genre. It’s a kind of tacit vindication for the paranoid in all of us, empirical evidence to confirm that, yes, European hostels are in fact surreptitious torture chambers, pagans really do conspire to sacrifice well-meaning Christians, and the Australian outback isn’t so receptive to weekend backpacking. David Cronenberg excelled more than most at this sort of fear-mongering social horror, channeling anxieties fresh in the minds of the public consciousness into all manner of B-movie effects and prosthesis; his early masterpiece Shivers, perhaps most notably, expressed North America’s then-burgeoning fear of sexually transmitted disease as a grotesque phallic alien whose attack causes its victims to develop an insatiable appetite for promiscuity.

Citadel models itself fairly transparently on Cronenberg’s shopworn social-horror framework, appropriating some of the most salient iconography (the working-class tenement housing of Shivers and the hooded child monsters of The Brood most conspicuously) to similarly zeitgeist-baiting ends. Foy’s borrowed trove of horror-movie clichés are marshaled to action here as manifestations of recognizably contemporary psychic baggage, which, given his chosen milieu (a modern-day British borough resembling a warzone), makes class disparity the obvious subject and target. This tension is fertile ground for social critique in the wake of the 2011 London riots, and it’s been recently navigated, with a light touch, by Joe Cornish’s blackly comic satire Attack the Block; that film smartly subverted middle-class preconceptions by recasting Britain’s underclass youth as its unlikely saviors, oppressed not only by an invading army of aliens, but also by the usual institutions of state power and force. Attack the Block’s reversal of expectations is productive: It plays into pervasive social attitudes only to undermine them, proving common fears misguided.

Citadel certainly plays into these same social attitudes (indeed, it practically mounts a case for the eradication of the British underclasses), but its early swerve into hardcore conservatism never circles back around to acceptance or understanding, and by the end of the film its conception of working-class England as a hell-on-Earth to be either avoided or feared isn’t so much undermined as it is staunchly, you might say even bullishly, reaffirmed. The basic setup seems promising: After watching helplessly as his pregnant wife is murdered by a gang of wayward teens, newly widowed Tommy (Aneurin Barnard) struggles to overcome the agoraphobia that keeps him locked inside his dilapidated townhouse, unhelpfully located smack in the middle of England’s most ominous village. The everyone-is-complicit paranoia of The Wicker Man collides with a vaguely Haneke-like threat of perpetual home invasion; meanwhile, the fleeting, clearly demarcated intrusions of horror-movie scares are bracketed by the reliable Jamesian suggestion of possible delusions. These, however regrettably trite their execution, are the building blocks of considered social satire, and it isn’t difficult to imagine the same material working toward a more critical resolution—namely that a crippling fear of working-class Britons is a consequence of poor social engineering, classist bias, and so forth, which would be easy to effect given the elements at play.

Instead, however, Citadel delineates a vision of modern England as a place literally plagued by the helplessly poor, a group it visualizes as snarling zombies in gray hoodies and beat-up chucks. Its resolution instructs the fearful middle classes to simply ignore these deeply dangerous creatures—and then, naturally, to blow them up. What is its final symbol of the burning slum highrise, with a horde of zombified youth condemned to die inside, if not the ultimate realization of institutionalized social oppression? Let the damn kids burn, as they’re barely even human anyway. A more generous reading of what often resembles a vaguely fascistic agenda is that the anxieties surrounding class disparity in Britain, particularly following the riots and their attendant fallout, generate too much ideological confusion to sort through and parse, which results in misguided expressions of amorphous, mostly undefined feelings. Citadel isn’t an angry film; it doesn’t have a clear enough idea of what it’s propagating to rally behind it with vehemence. It is, rather, a fearful one; it’s just that, having not thought critically enough about those fears, it ends up being on the wrong side of a necessary fight.

Citadel wears its budget on its sleeve, and this 1080p transfer does the best with that material: Shot digitally and with the eye of a competent amateur, the image is often clean, unfussy, but generally uninspired (the opening shot of the highrise sets a high-water mark that’s never again matched). The film occasionally makes good use of its trendy, silence-heavy sound design, and when a good kick is needed, usually when a baddie pops up unexpectedly, the 5.1 DTS-HD Master Audio track is adequate.

Disappointingly little, given the nature of the project. Something more than a fluffy making-of featurette and a handful of uninteresting interviews should be expected of a film this interested in ambiguity and symbolism (a commentary track would have been nice, especially).

You can’t make a British horror film these days without straining to articulate class anxieties, and Ciaran Foy’s Citadel is no exception.

Review: Alfred Hitchcock’s The Man Who Knew Too Much on Criterion Blu-ray