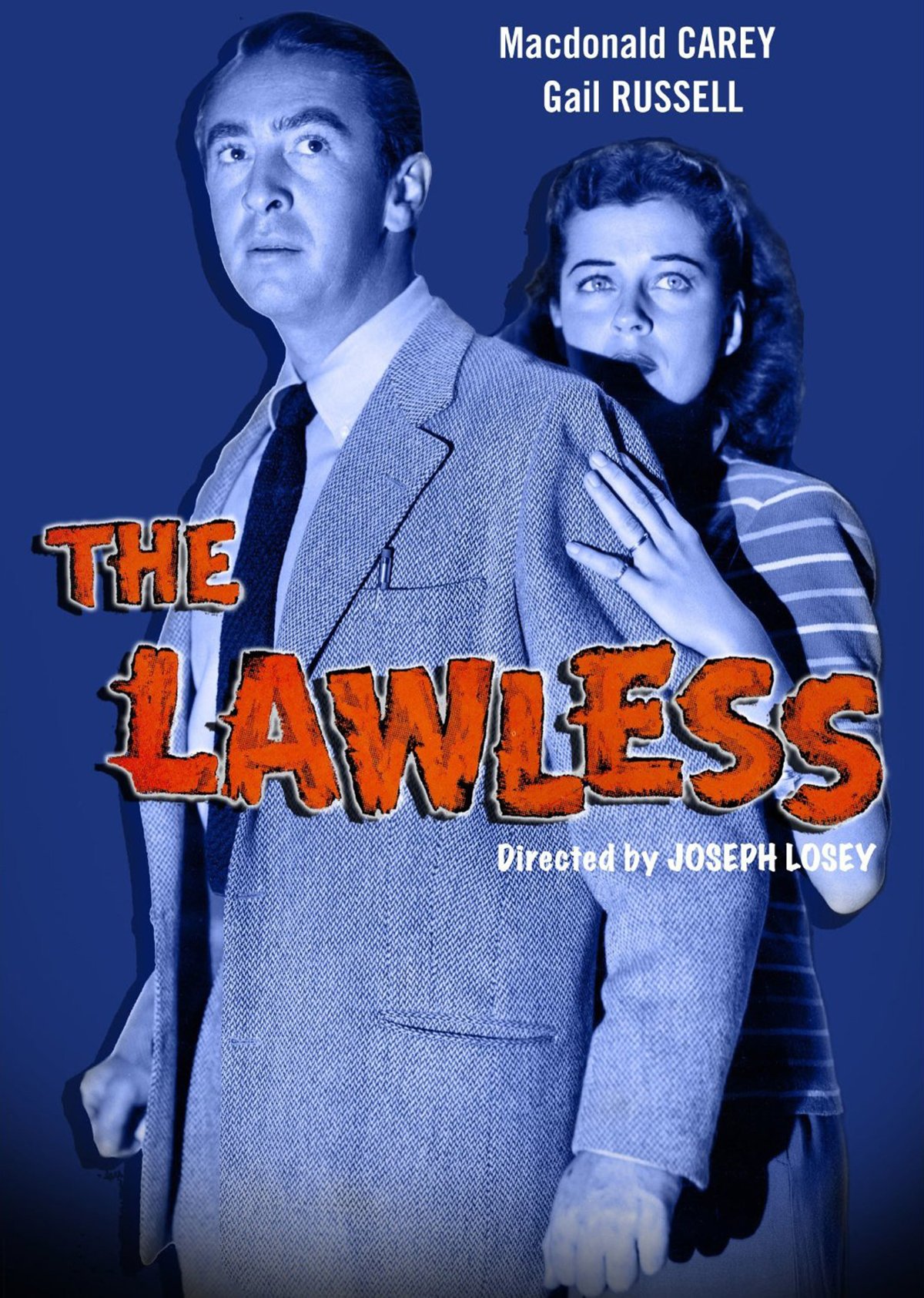 Wisconsin-born director Joseph Losey started his career as an able-bodied maker of short subjects for MGM before graduating to features in 1948 with The Boy with Green Hair. His brief American period, prior to being blacklisted, sees him creeping around the fringes of studio officialdom: RKO one day, Paramount the next, poverty row the day after that. After the blacklist, he entered a brief period of anonymity, hiding behind pseudonyms imposed by fearful producers and actors. Then, the Reconstruction, when you would have mistaken him for some hotshot British auteur, with films like The Servant, The Go-Between, and Eva. You wouldn’t have guessed that this same man had made an L.A.-based remake of M, or The Prowler, or the angry, social-problem potboiler The Lawless.

Being what it is, a shoestring-budgeted, ripped-from-the-headlines melodrama, filmed using real locations, about a series of misunderstandings that leads to an all-out race riot in a small California town, The Lawless is angry, but it tellingly lacks the haymaker impact of two other 1950 films that trafficked in similar territory: Luis Buñuel’s Los Olvidados and Cy Endfield’s Try and Get Me! Compared to those films, The Lawless seems purposefully mellow, less hasty to blast its targets with vitriol, however much they deserve it.

True, this is partly because Losey’s film filters its observations about race and class through an idealistic white protagonist. But this isn’t The Help, and Macdonald Carey’s well-intentioned newspaperman isn’t given the kind of redemption/discovery arc that seems almost mandatory in today’s screenwriting ethos. If you can imagine the film being remade today, starring Brendan Fraser or Edward Norton, and maybe you make his character an alcoholic who doesn’t spend enough time with his kids, and when he sees what those poor Mexican laborers are put through, he gets religion and decides he has to Do Something. No, The Lawless, blessedly, is not that film. Carey’s Larry Wilder rides no moral or emotional pendulum, has no cathartic breakthroughs, and he’s neither a particularly likable nor pointedly unlikable guy. When he’s in the company of a lady journo, a friendly rival on the beat-reporting scene, whose yellow prose aims to deep-six the unfortunate kid who’s been made to represent the threat from the county’s Mexican population, his smile is an ambiguity that indicates an even mixture of disgust and grudging admiration. No lectures here.

Similarly, Losey has no interest in rubbing our noses in righteous indignation. If The Lawless falls short of being about anything in particular, Losey made a brisk, efficient piece of journo-tainment, one that’s modest in scale but substantiated by deep spaces and fluid tracking shots. There’s that sense of early-morning solitude that would be more forcefully rendered in his later work. Losey would direct Carey just once more, in 1963’s startling These Are the Damned, for Hammer Films. While seemingly worlds away from The Lawless, Losey used a sci-fi framework to reaffirm his sympathy for the helpless and the exploited, as well as to deflate the heroic image of privileged saviors.

Olive Films’ standard-definition transfer of The Lawless is outstanding, with minimal digital noise, and clean materials. The crisp, storm-cloud textures of Poverty Row-trained J. Roy Hunt’s cinematography is impeccably reproduced. Like a lot of viewers, I felt sure I’d never be able to watch a DVD after switching to Blu-ray, but this is totally fine.

The protean Losey’s second feature is a modest little fighter that takes a risky subject—race and class conflict in a quiet, SoCal town—and almost goes somewhere with it. Olive Films did a first-rate job with their standard-definition transfer.

Review: Lynne Ramsay’s We Need to Talk About Kevin on Oscilloscope Blu-ray

Review: Eclipse Series 33: Up All Night with Robert Downey Sr. on Criterion DVD