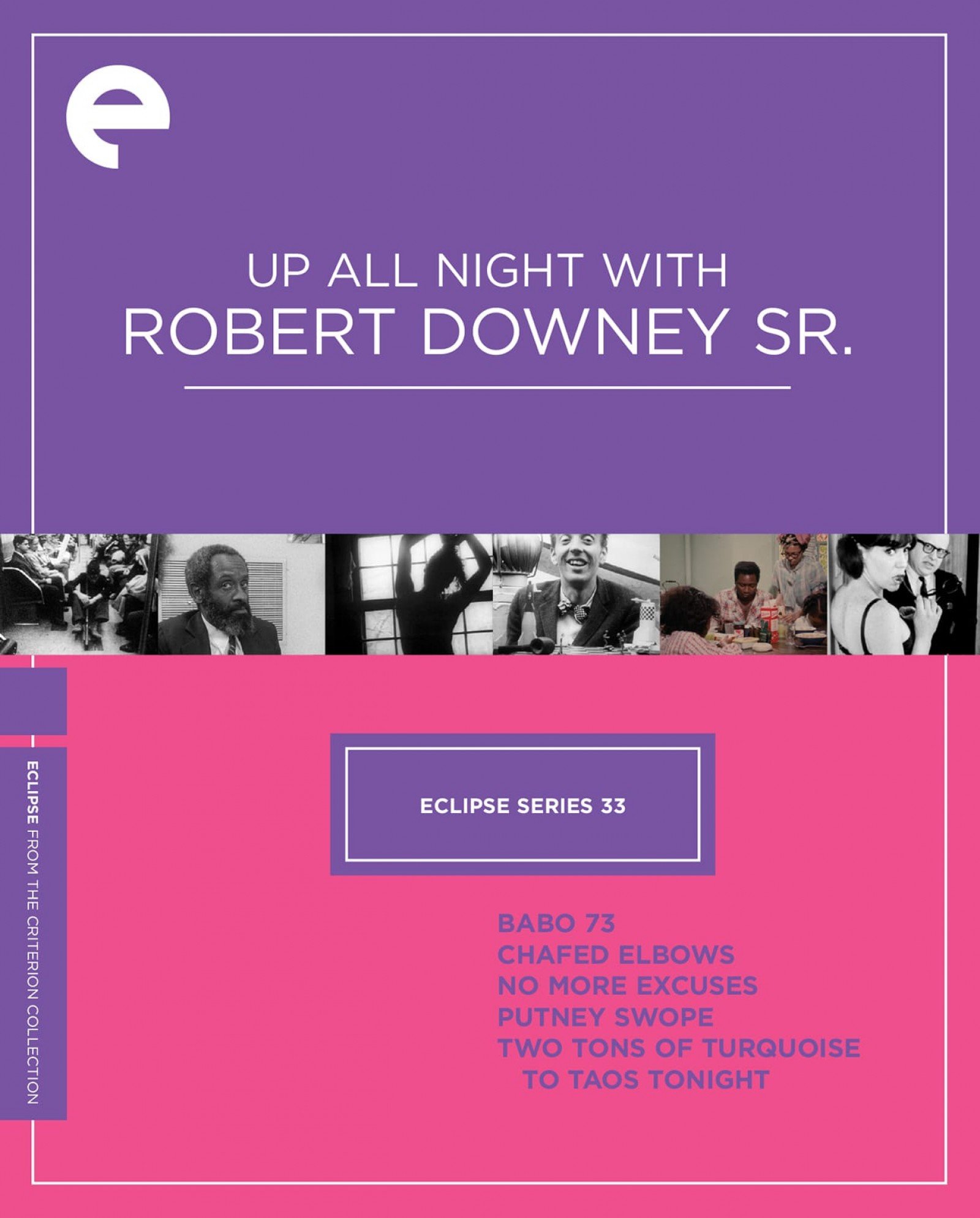 “Underground, overground, what is this jive?” barks a voice—very likely the filmmaker’s—from the soundtrack of Robert Downey Sr.’s Chafed Elbows once the closing credits have faded to black. “What you pay, two dollars?” Capping this 1966 feature, the director’s second, composed largely of still photos as it follows a Manhattan Candide on the verge of a nervous breakdown, the coda typifies an antic sensibility preserved in this five-film Up All Night with Robert Downey Sr. set. A guerrilla auteur who acquired his suffix after Junior became a movie star, Downey Sr.’s early signature works in this collection combine sacrilege and satire, then a rarity in American cinema outside of fare seen at small film societies and DIY screenings, along with fatalism and sexual japeries reminiscent of Lenny Bruce’s rude comedy. His youthful origins as a playwright showing in the logorrheic vernacular of his characters’ voiceovers and monologues, Downey Sr.’s mix of rapid cuts, handheld location shooting, and improv-like narrative digressions still makes for an engaging fusion of experimentalism fused with the showmanship of a vaudevillian.

After producing one short and a classroom documentary, Downey Sr. made the hour-long Babo 73, starring Taylor Mead as a dithering future president of “the United Status” wrestling with a burgeoning threat from “the Red Siamese,” racial violence (a self-proclaimed white “peace poet” is beaten for trying to forcibly integrate a black college), and the competing ideologies of his three advisers—a reactionary, a liberal, and a manic radical who shouts “Salinger is God!” from under the porch of a dilapidated Victorian that serves as the White House. Key meetings are held on the beach and in the lavatory, Mead staggers down the steps of the Capitol and around the United Nations HQ, a sanctimonious priest picks up a beehived hitchhiker before ravishing her in the bushes, and the tone is energetically anarchic enough to compensate for the chaotic jumble of targets and themes.

Following with Chafed Elbows, and its montage of stills that suggests a funky La Jetée or a precursor of National Lampoon’s Foto Funnies, Downey Sr. upped the acidity and narrowed the focus by having his barefoot antihero Walter Dinsmore (George Morgan) crawl out of an incestuous bed with his mother (the director’s wife Elsie, playing all the female roles) to wander Gotham, encountering and competing with a city full of aggressive crazies. Absurdism reigns when a pregnant Walter births a stack of $100 bills by C-section, but there’s pointed contempt for pop art (Walter is signed and displayed in a gallery), abusive cops, avant-garde cinema (“All the action is behind the camera”), and musical dilettantism when Walter serendipitously cuts an S&M folk-rock tune (“Where’s Your Black Leather Negligee?”). Most memorably, a premature visit to the afterlife, a night court seemingly judged by a North Vietnamese soldier, features a decidedly unvirginal Mother Mary in a striped top who coos, “Tell Charlton Heston I’m waitin’ for him.” Downey Sr. still makes time for his whoopee-cushion jokes (a policeman fencing nude pics of Bertrand Russell, Lyndon Johnson in a Nazi uniform), but his chafing at everything authoritative and diseased in LBJ’s foundering Great Society infectiously carries an anger that doesn’t date.

Two years later, No More Excuses, clocking in at a quick 46 minutes and co-directed by Elbows editor Robert Soukis, seems to be a placeholder in Downey Sr.’s career as its most imaginative strand—a Civil War soldier played by the director awakes from his battlefield wound in 1960s New York—is footage recycled from his first short seven years earlier. (In the most Borat-like stunt in his oeuvre, Downey Sr. interrupts an actual game at Yankee Stadium by strolling onto the field in his Union Army duds, thrilled to be among other anti-Rebs.) Otherwise filled out by hoaxster Alan Abel as an impassioned activist against animal nudity; a stalker episode that mixes orgasmic bomb detonations, the Who’s “I Can’t Reach You,” and a breast-suckling chimpanzee; the story of President Garfield’s assassin; and documentary interviews of the denizens of Upper East Side singles bars (“She don’t even know how ta fuck!” one guy shrugs at a past hookup), this return to fully moving pictures seems the most superficial and random of Downey Sr.’s broadsides against good taste and sanctimony, but the ambition of his next project would lift him into a higher realm.

Putney Swope, set at a Madison Avenue ad agency where the CEO dies in a meeting and—with the chief’s body still warm on the conference table—the board inadvertently elects their token black member (Arnold Johnson, dubbed by Downey Sr.) to succeed him, uses the most mercenary of white-collar professions as a metaphor for racial tension (and African-American infighting) in the societal cauldron of 1969. Seizing his opportunity to play with the big boys, the newly empowered Swope vows “I’m not gonna rock the boat; I’m gonna sink it”: renaming the agency Truth & Soul, barring accounts for alcohol, cigarettes, and war toys, and populating the office with an all-black staff (save for one token white exec) whose politics range from assimilationist to Panther militancy, he produces transgressive TV spots—seen in most of the film’s few color sequences—that produce a media shitstorm. (The parodies mock the “cool” marketing aesthetic with trendy music and framing supporting indecent content, as a passenger for Lucky Airlines enjoys an orgy with stewardesses, and an interracial collegiate couple serves as mascots for pimple cream, scored to a syrupy ballad: “Girl, I saw your beaver flash/I’ll never be the same…”)

Making a film with a reasonably linear narrative for the first time, and eschewing Black Is Beautiful agitprop or a shred of sentimentality, Downey Sr. presents Swope as a hard-ass approximately as avaricious and corrupt as his predecessors, with flunkies who chant numbing catchphrases (a spokesgirl has “got to have soul”) in place of thinking, save for a burnoose-wearing hellion called the Arab, played by ‘70s supporting icon Antonio Fargas, whose abuse (“You a jive cat in a two-button suit”) Swope patiently indulges. There are characteristically baroque gags in Downey Sr.’s earlier style, such as a German-accented dwarf as a polyamorous U.S. president, and the plot ultimately flags under an ambivalence that seems to parallel Truth & Soul employees’ restlessness, but the film’s skepticism of both radical chic and the corporate establishment retains a refreshing maturity, as the advertising chief’s wardrobe changes from Nehru jacket to Fidel Castro’s cap and fatigues mark him as an avatar of fashionable autocracy. Putney Swope significantly altered Downey Sr.’s career when it was picked up by a national distributor and was a sleeper hit, becoming a totemic satire of its era; this critic first saw it in 1979 when it played on a wide re-release double bill with Animal House, a much more comforting picture of subversion.

Following a pair of lower-grossing studio efforts, the religious burlesque Greasers Palace and the canine allegory Pound, Downey Sr. centered on his first wife Elsie in the 1975 freeform project Moment to Moment, seen in this set in a re-edited version titled Two Tons of Turquoise to Taos Tonight. Playing a couple dozen characters from an eye-patched coke fiend on a laughing jag to a pair of Cockney friends comparing notes on lovers, Elsie is the star of what sometimes seems to be a disjointed audition reel, but a theme of male oppression through expectation of servitude: Men call for her to fetch them burgers or tequila, or play her with lame pickup lines (“I got a groovement for your movement”). Downey Sr.’s spouse makes an unsteady but personable impact, particularly in singing a ballad of parental love, and a melancholic sobriety takes hold when the camera turns to others, as when a middle-aged man in a suit bleakly talks of existentialism and then his own physical degeneration. A shambling kind of home movie, Two Tons closes a chapter in advance of its maker’s forays into TV and industry-funded film work, some of which would feature his son, seen here as a moon-eyed pre-adolescent displaying an arm cast.

Unlike many of his peers in the New York underground, Robert Downey Sr. frequently shot on 35mm film, but the versions seen here, save for a shiny transfer of his breakthrough success Putney Swope, show signs of wear and tear, though none are distractingly damaged. (Among the five titles, No More Excuses was available only from a single 16mm print source.) The mono sound, due probably to both low budgets and the style of some of the performers, occasionally produced muffled dialogue that required me to turn on the subtitles.

As per the Eclipse standard, there are none, except a booklet essay by critic Michael Koresky for each of the two-disc cases, which provides a solid overview of Downey Sr.’s evolution as a self-made film artist who used film “to freestyle and bop.”

Though this two-disc set offers only the films rather than production background, from animal-clothing rights to a bonfire of cash, it presents a smart, jaundiced counter-myth of the ‘60s.