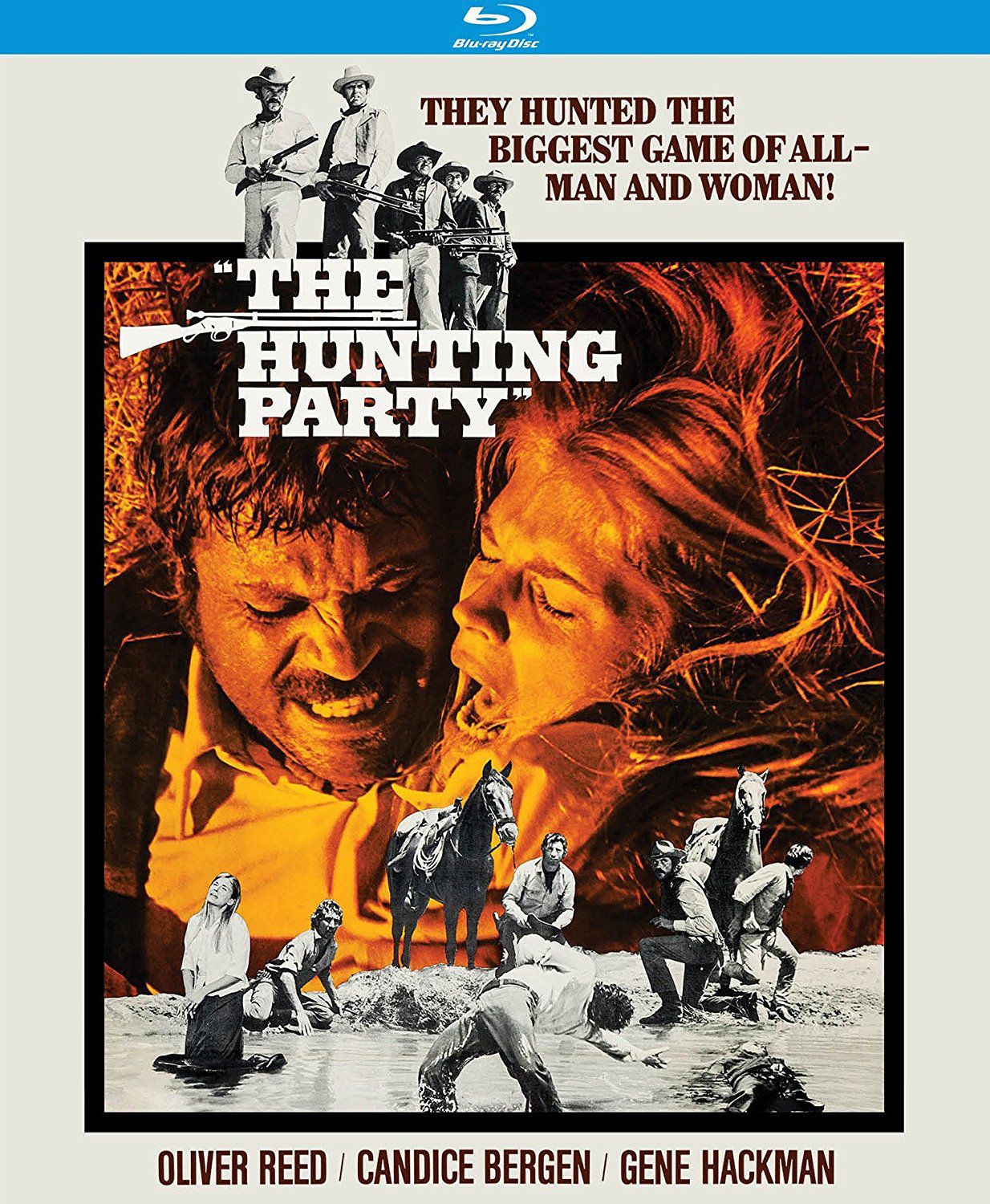 The first few moments of The Hunting Party establish an equivocation that will govern the film. Rancher Frank Calder (Oliver Reed) and his gang flip a cow over, gut it, and prepare it for eating, sampling slivers of raw meat. Juxtaposed with this killing is a sequence in which wealthy kingpin Brandt Ruger (Gene Hackman) has cold and mechanical sex with his wife, Melissa (Candice Bergen), flipping her over in a manner similar to how Calder and his outlaws handle the cow. The message is unmistakable: Women and cows are seen by the men of this world as interchangeable goods, to be handled as they see fit.

Frank kidnaps Melissa, rapes her, and fights with his men, who want to take their own turns with her. Meanwhile, Brandt turns his posh hunting party on Frank and his gang, gunning them down from far-away vantage points with experimental telescopic rifles. Melissa’s welfare is of no consequence to Brandt, who sees her as stolen and defiled property. For Brandt, there’s no difference between killing Frank and whatever game he and his friends would’ve been originally hunting. The film takes the embittered implications of John Ford’s The Searchers to their most extreme and logical conclusions.

The Hunting Party was released in 1971, the same year as Sam Peckinpah’s Straw Dogs, and retrospective comparison between the films is inevitable. Both belong to the outlaw cinema that arose out of the success of Arthur Penn’s Bonnie and Clyde, Dennis Hopper’s Easy Rider, and Peckinpah’s The Wild Bunch, which all suggest that the distinction between heroes and villains is a matter of positioning and privilege, by extension critiquing our hypocritical society, whose crumpled image has only become increasingly and perhaps irrevocably tarnished. In a conventional western, Brandt would be the unquestioned hero, but The Hunting Party goes out of its way to ensure that we find him repulsive as a signifier of the white patriarchal entitlement that ran roughshod over the west, victimizing women and people of color.

The luxuriousness of the personalized train that Brandt and his friends ride between killings is obscene given the contrasting horror of their war campaign, and Brandt is implied to torture a prostitute, branding her with the end of his cigar. The telescopic rifles are another obscenity, as they speak of a rich man who can do his killing from afar without getting his hands dirty. There’s probably an allegory for the Vietnam War embedded in all this somewhere, though, in this case, the better-armed men of wealth actually win.

By contrast, Frank is almost offered up to viewer as an innocent, which is ludicrous considering his crimes; presumably, he’s morally superior to Brandt in the filmmakers’ eyes because he’s poor. Director Don Medford and screenwriters William W. Norton, Gilbert Ralston, and Lou Morheim may be aware of the studied naïveté of such an assertion, and they may be sporadically parodying the concept, but we’re meant to accept Frank as the doomed hero, a victim of a prototypical model of land-grapping capitalism. Melissa takes to him quickly after they bond over a jar of peaches, which they eat with a degree of slurping and sucking that suggests a euphemism for oral sex. She may be suffering from instant Stockholm syndrome or she may see that quasi-consensual sex with Frank is preferable to an endless succession of gang rape—a damned-if-you-do, damned-if-you-don’t trap that embodies women’s tragic and historic lack of options in a male-dominated wasteland.

The film is intensely self-conscious, embracing hopelessness as a fashion statement. Brandt’s pursuit of Frank is staged with little sense of suspense, as it’s unsentimentally understood that Brandt is better armed and resourced and thusly capable of annihilating Frank’s gang with little complication. The film suggests the American genocide of the west writ in miniature only with white people turning on themselves, equating disenfranchised ranchers to Native Americans, and it’s resonant on these single-minded terms.

As tough as The Searchers, Bonnie and Clyde, The Wild Bunch, and Straw Dogs are, their malleable characters suggest real people, and their metaphorical reverberations are thorny and mysterious. Medford films his action scenes evocatively, furnishing images of lively, burnished grit, and Hackman is superb as a man of debauched and neurotic self-regard. But the film makes its point about male evil and keeps making it, and its obsession with brutalized women is unseemly given its disinterest in Melissa as anything other than an ideological MacGuffin. For all its pretenses of maturity and ambiguity, The Hunting Party reduces the western to a game of tag, using moral relativity as a handy justification for dehumanization. Men come in moral colors of black and blacker, and women are manipulated sheep for the slaughter.

The image is a little soft, which intensifies the film’s evocative roughness. Color stability is quite good, especially the painterly flesh tones of the actors, and the browns and reds of the land and spilled blood, respectively. Image clarity is strong with an appealing graininess, though there’s some potentially unavoidable clustering during a somewhat awkward rear-screen projection scene. The monaural soundtrack sounds flat in terms of dialogue rendering, though the mixing of the gun battles is viscerally precise and immersive, with full-throated, multi-planed eruptions of explosive cacophony. This transfer isn’t faultless, then, but it’s quite attractive on the whole, particularly considering the film’s once pervading obscurity.

The audio commentary by film historians Howard S. Berger and Nathaniel Thompson contextualizes 1971, the year of The Hunting Party’s release, as an apex of violent and politically incensed cinema. Berger and Thompson discuss the film’s caustic, unreasonably reactionary reviews; a big concern of much criticism of the time was “redemptive social value,” which has aged into priggishness. The historians are huge admirers of The Hunting Party and see profundity where I see obviousness, but they make a strong case for it despite sharing the film’s weirdly sentimental affinity for Frank. Gene Hackman’s career, which would skyrocket the same year with The French Connection, is also covered, and there’s good discussion of The Hunting Party’s exemplary cast of character actors. A brief interview with one of said actors, Mitchell Ryan, is also included, and features choice anecdotes concerning the tension among the cast and Oliver Reed’s legendary propensity for drinking and carousing. A gallery of trailers rounds out a slim yet textured package.

Whatever its faults, such an edition of the violent, well-acted, yet emotionally monotone The Hunting Party would’ve been unimaginable once, and shouldn’t be taken for granted.