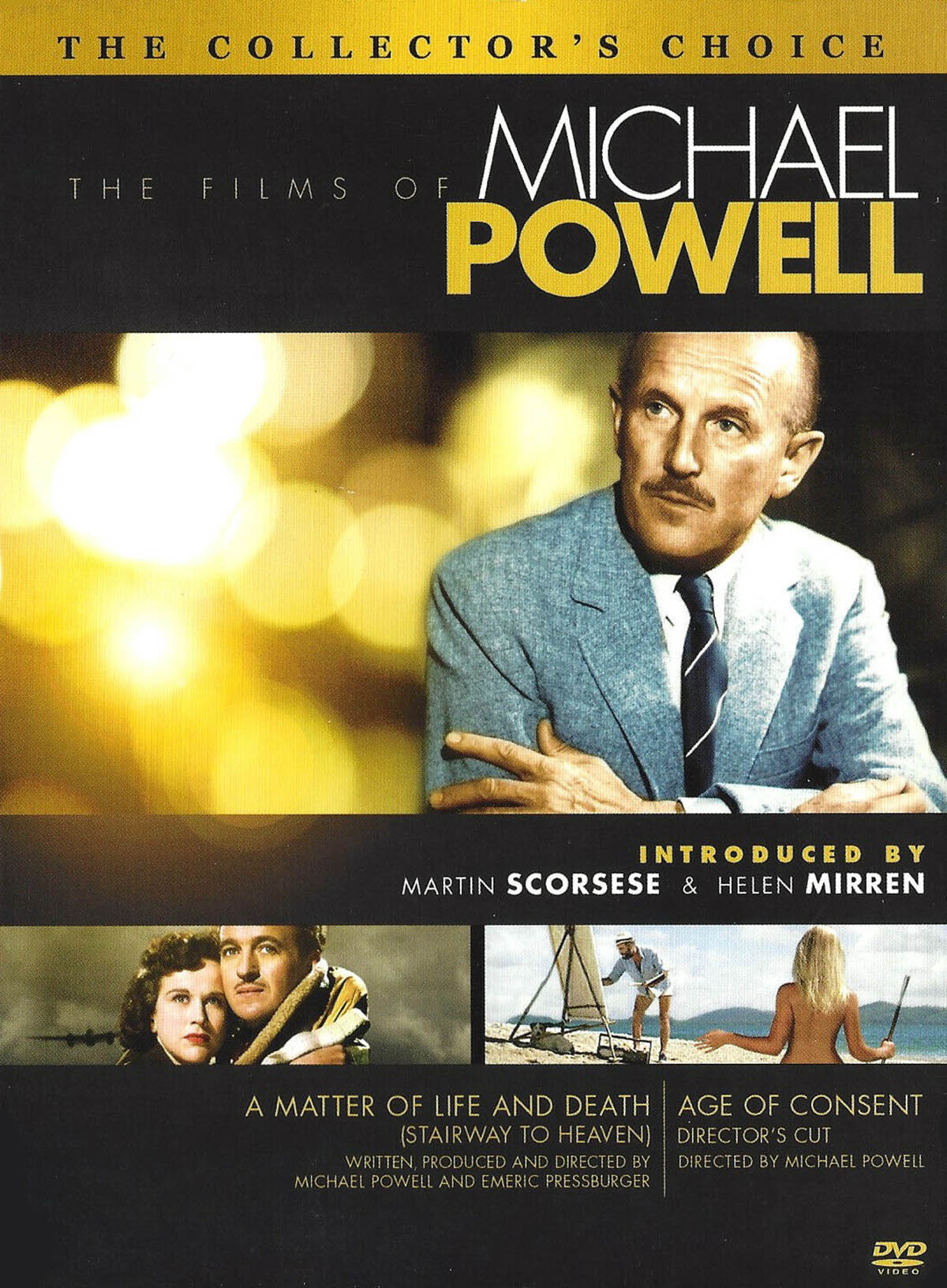 “This is the universe. Big, isn’t it?” The line, heard over a tour of the cosmos at the beginning of Michael Powell’s A Matter of Life and Death, would have come off like a winking understatement out of Monty Python if it didn’t so neatly encapsulate the sense of overpowering awe and quizzical reserve that made the British director such a unique visionary. That peculiar mix is nicely illustrated by the two films included in this Michael Powell DVD set, showcasing Powell’s vast imagination in eccentric visions more than 20 years apart.

A 1946 fantasy made with fellow aesthete Emeric Pressburger under the Archers banner, Life and Death was originally commissioned by the British Ministry of Information to help boost postwar Anglo-American relations. Indeed, the war is very much still raging as the camera descends from its opening cosmic vantage to the foggy English Channel, where RAF bomber Peter (David Niven) falls for June (Kim Hunter), a young Yank radio operator, over the airwaves as his aircraft goes down in flames. His time is up, yet he manages to survive a parachute-free drop into the ocean: a celestial snafu, it turns out, so a messenger from the afterlife is sent to correct the oversight. This being an Archers picture, however, heaven is visualized as a black-and-white bureaucratic depot equipped with angel wings and Coke machines, and the Reaper figure is a flaming, powdered French fop (Marius Goring) who, down among the mortals, is delighted by cinematographer Jack Cardiff’s vivid hues (“One is starved for Technicolor up there,” he meta-quips). Trouble is, Peter has taken up with June and argues with fate to stay alive: “Yesterday I wasn’t in love. Today I am.” Hints that this loose telling of the Orpheus myth is taking place inside the felled pilot’s wounded skull are further cemented when the doctor helping him (Roger Livesey) turns up as the attorney at his heavenly trial.

Simultaneously radical and cozy, the illusionism of Life and Death is closer to the florid netherworlds of Black Narcissus and The Red Shoes than to contemporary stairways to heaven like Here Comes Mr. Jordan and Heaven Can Wait. As in those Powell-Pressburger joints, behind the audacious style and disconcerting in-jokes lies a romanticism as old as the hills—or at least as old as Molnar’s Liliom, which the story wittily reworks. The picture’s portrait of a regenerative moment in time hinges not only on the protagonist’s struggle for his life, but also on his union to a woman from across the pond and, on a larger scale, the healing of a country through culture and history (it’s not for nothing that an Elizabethan home doubles as a hall for recovering soldiers, where the nurses rehearse a production of A Midsummer Night’s Dream). Yet, despite the jingoistic pedigree, the film is hardly uncritical propaganda: At one point Peter’s celestial prosecutor, a slain American Revolution patriot played by a fire-breathing Raymond Massey, points out that every member of the jury comes from a nation that’s suffered from British imperialism. The concept of love transcending death is scarcely a novel one in movies, but it’s rarely expressed with moments as robustly poetic as when Peter, suspended between worlds, catches his beloved’s tear with a rose.

Next to such startling close-ups, gestures, and camera movements, Age of Consent may feel like a male menopausal doodle. Made by Powell in 1969 long after his partnership with Pressburger had dissolved (and after Peeping Tom had made him virtually unemployable), it is something of an anticlimactic swan song, barely mentioned in Powell’s memoirs and remembered mainly by Mr. Skin members tracking down nude shots of Helen Mirren. The actress, 24 at the time, plays beachfront muse to James Manson’s urban painter, who comes to Australian shores after artistic inspiration and finds it in the tawny water nymph. If elevating the film’s lackadaisical tone to the aged-auteur serenity of, say, Ford in Donovan’s Reef or Hawks in El Dorado is a bit of a stretch, there’s no mistaking the self-portrait of the creator who lives for his art (“You only wanted me for your pictures,” the lovelorn model complains to the painter). Whereas the same struggle ended in smoke and tragedy in Red Shoes, here it leads to sunshine and renewal. Age of Consent may not be the ideal capper to Powell’s career, but it remains a monument to a cinematic conjurer who sought—and found—passion even in a flimsy travelogue.

Color is an essential component in most Michael Powell films, and, happily, all’s well in that department: Hues are pristine and vibrant in A Matter of Life and Death, soft and warm in Age of Consent. Sound levels are crisp on both films, even during the camera’s underwater ventures in Age.

A Powell DVD isn’t complete without a word from Martin Scorsese, who introduces the two features with customary heartfelt ardor. Each film gets a solid audio commentary, with Ian Christie dissecting Life and Death’s portrait of postwar England and Kent Jones pointing out Powell’s personal grace notes in Age. Helen Mirren is delightful in a brief interview, though it’s a shame that Age gets a pair of featurettes (one on the production’s origins, another on underwater shooting) while Life and Death gets none.

A masterpiece and a doodle make for an odd but worthy double bill for Powell enthusiasts.

Review: Roberto Rossellini’s The Taking of Power by Louis XIV on Criterion DVD