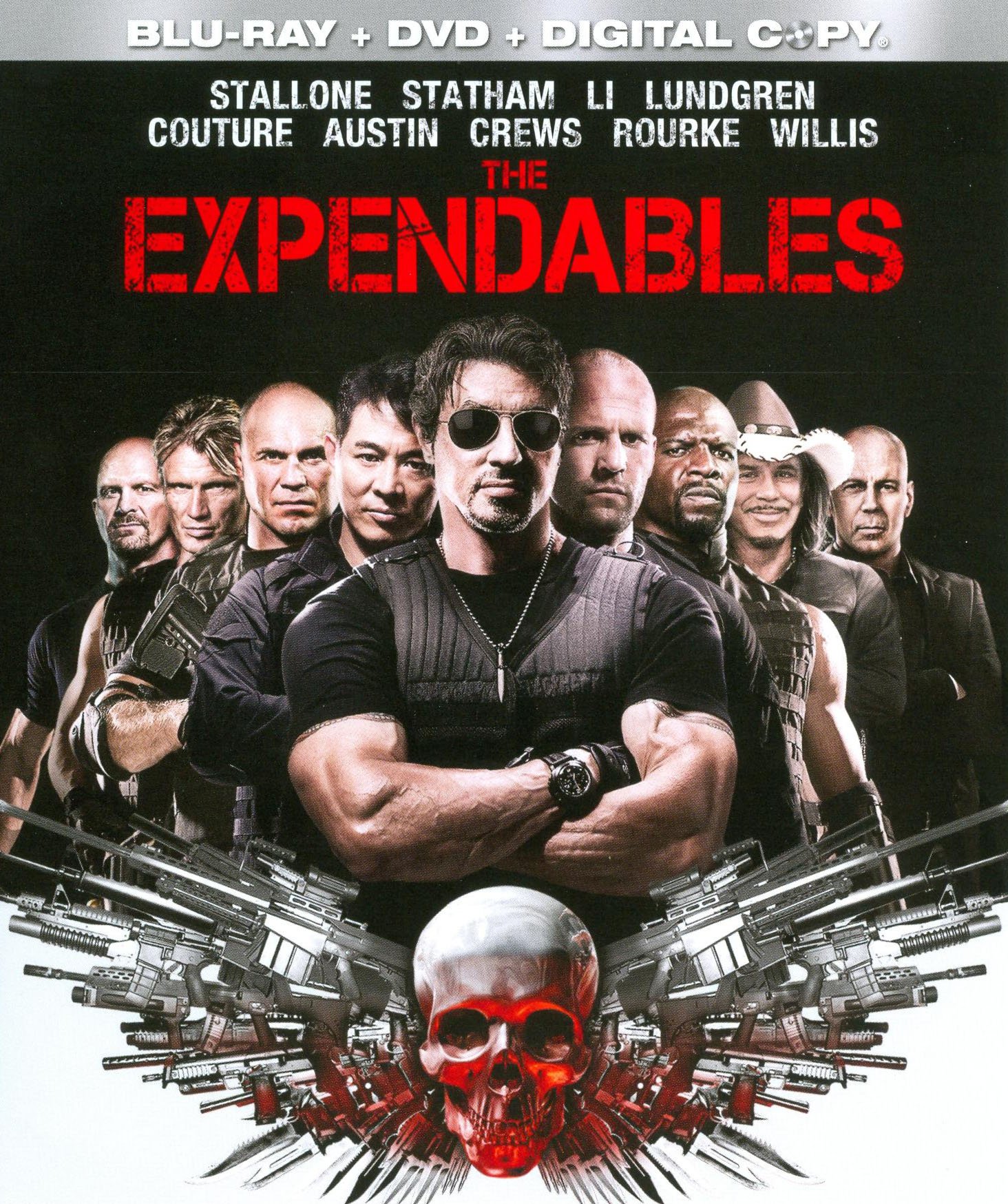 Sylvester Stallone is nothing if not shrewd; the co-writer/director/self-consciously working-class beefcake icon is currently enjoying his sixth or seventh comeback because he knows how to play to his limitations. Stalloneâ€™s latest, The Expendables, expands its filmmakersâ€™ brand with a bald celebration of its primitiveness, as itâ€™s one of those films whose admirers can justify its every inadequacy with a â€śBut itâ€™s supposed to be that way!â€ť The situations in the film are so stock they could be intentional, a way of not-so-implicitly announcing that itâ€™s all about the guys. The guys, of course, are an admittedly impressive lineup that aroused the curiosity of more than just the action apologists: In addition to Stallone, thereâ€™s Jason Statham, Jet Li, Dolph Lundgren, Mickey Rourke, Randy Couture, and Terry Crews, with other cameos to contribute to the filmâ€™s potential air of self-reflexivity.

The Expendables is occasionally bluntly charming, like that drunk uncle irregularly allowed to participate in holiday gatherings. Stallone has long abandoned that relentlessly pounding editing rhythm that characterized his 1980s films as a director; heâ€™s embraced a low-rent visual lumber, that, for him, is equal parts survival and self-congratulation. The obligatory introductory mission has a few amusingly ridiculous punctuations of gore, particularly as delivered by Lundgrenâ€™s burned-out, soon-to-be-former Expendable. Stallone and Statham are surprisingly effective together, despite the absence of cleverly jocular banter. Crews is clearly in the film to vary its color scheme, but Stallone is considerate enough to arm him with a fantastically destructive automatic shotgun at the filmâ€™s climax by way of compensation. Rourke, as a tattoo artist/former mercenary who funnels the Expendables work from the sidelines, somehow gives a real performance with ludicrous material that he may have made up as he went along. Bruce Willisâ€™s cameo is too jokey, but he proves that he still knows how to deliver the f-bomb with aplomb and venom.

Charms aside, The Expendables is undeniably sloppy and clunky; itâ€™s far too reliant on its audienceâ€™s determination to like it. Stallone, never a graceful storyteller, botches the most dependable of ensemble action-movie templates: the Quest to Raid the Huge Impenetrable Island Fortress Ruled by Ruthless Dictator. One could reasonably assume, after the opening gunplay to sate our bloodlust, the film would gradually build to the big assault while alternating between the bad guysâ€™ evil pronouncements and mayhem and the good guysâ€™ beers, profanities, and longings. Stallone, sadly, drags the film down with a pretend moral awakeningâ€”curiously structuring the story so that it requires two visits to the (fictional) South American island. This may have sounded reasonable on paper (two raids for the price of one movie!), but it leads to quite a bit of dawdling as we await the Expendablesâ€™s inevitable second trip to the island.

Convoluted inefficiency might have been forgivable if the action were any good. Stalloneâ€™s prior film, Rambo, was tasteless, but it built to an obscene bloodbath that was cathartic for its very lack of polish. The Expendables, however, is mostly compromised of lugs grunting in murky, under-lit lairs: Stallone isnâ€™t enough of a director to exploit the contrast of his starsâ€™ fighting styles. (You wouldnâ€™t know from this film that Statham and Li are graceful, succinct performers.) A mid-film chase between Stalloneâ€™s classic working manâ€™s pickup and a bunch of manipulatively yuppie SUVs sounds potentially amusing and maybe even intentionally ripe for parody, again, on paperâ€”but it has no panache, no visual imagination, and itâ€™s only marginally more coherent than the surrounding chaos.

You wonder why Stallone couldnâ€™t have flexed his pull for stronger material. Thatâ€™s the paradox of the battered iconâ€™s career though: If heâ€™s too good you expect more, and you lose that sympathy that decades of ups and downs has inspired. Without that sympathy, Stallone is just another guy trying to make a buck, which just goes to show that heâ€™s far cagier than anyone typically allows.

The Blu-ray is a distinct improvement over the theatrical presentation of The Expendables. The colorsâ€”most notably the blacksâ€”are sharper, so the action is less murky in that low-budget 1980s action fashion that was partially, one supposes, the point; one suspects this is as good as this film is going to look for a while. The sound mix is authentically rather terrific, balancing the explosions and the occasional macho bon mot quite nicely.

The Expendables isnâ€™t the sort of film that features liner notes by David Denby. This is a big, happy geek package that even includes the shameless hyping at last yearâ€™s Comic-Con by AICN figurehead Harry Knowles. The documentaries are surprisingly long and generous with behind-the-scenes footage, even if Sylvester Stallone tends to dominate with anecdotes that have a habit of stating the obvious. The â€śUltimate Reconâ€ť feature works tidbits from the documentaries into side windows that play along with the film, a variation on the FX channelâ€™s DVD-movie presentations. The deleted scene and gag reel are typical, and â€śmarketing archiveâ€ť is an amusingly distinguished way of saying “trailers and posters.â€ť Stalloneâ€™s audio commentary, however, is disappointing, as one could reasonably expect stories from the set of The Expendables to trump the picture itself. The director is ingratiatingly laidback, but he has a tendency, as in the docs, to narrate the scenes without adding any detail that isnâ€™t immediately obvious. The juiciest gossip to come from this commentary is the pain involved in staging fights without pads, a fact with which the filmmaker is nearly poignantly preoccupied.

Stallone knows his fans. The Expendables is a big, happy geek package readymade for chips and beerâ€”and perhaps something harder, if youâ€™re not a fan.

Review: Steven Spielbergâ€™s West Side Story Is a Whirring Rush of Euphoric Energy