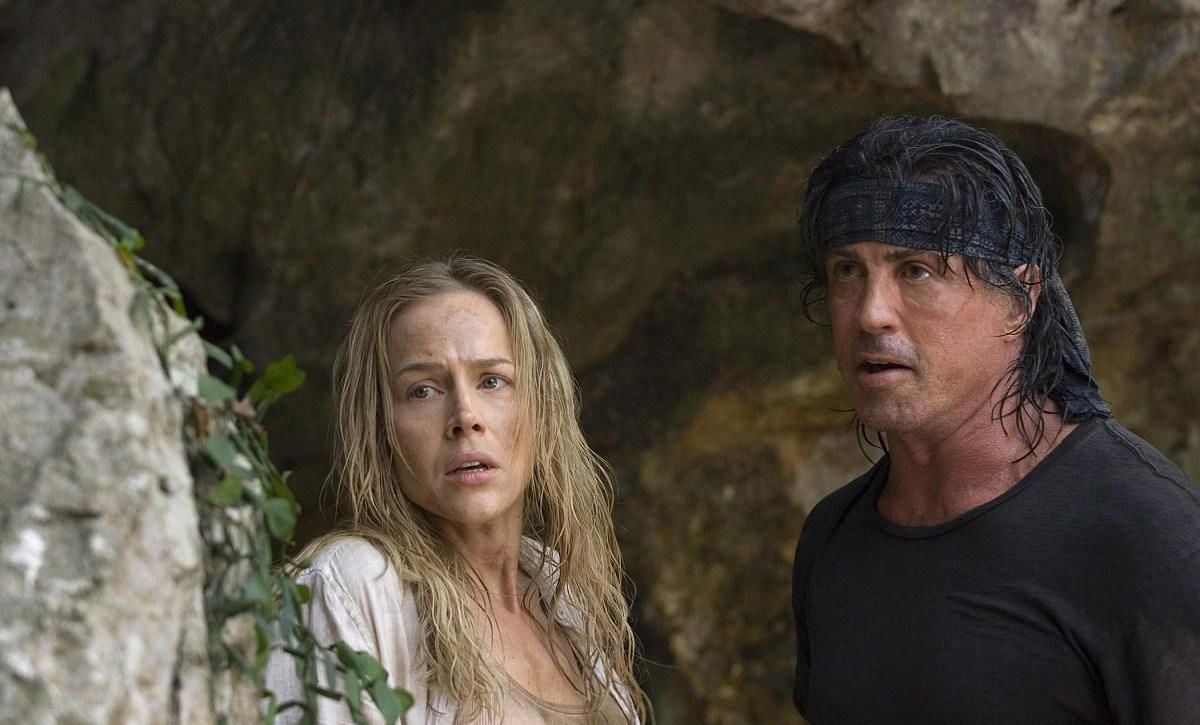 As with Rocky Balboa, the similarly stripped-down Rambo marks Sylvester Stallone’s shot at both resuscitating one of his fictional icons’ reputations after a lousy last saga, as well as resurrecting his own faded career. News footage of human rights atrocities in Burma immediately sets the geopolitical scene before the story locates John Rambo, now living a haunted, secluded existence catching snakes in a Thailand jungle and trying not to dream about his painful past. His muscular arms and neck covered in bulging veins amplified by human growth hormone, the 61-year-old former soldier is a man in self-imposed exile, though he’s soon thrust back into warfare after being recruited by Christian missionaries to take them upriver into Burma so they can nonviolently support the country’s Karen rebels. Whereas the Vietnam vet has long stood as a symbol of ‘80s-era U.S. militarism, this time around Stallone deliberately eschews any overt political affiliation for his lone warrior protagonist while simultaneously returning him to his First Blood roots, meaning that his older, more jaded superman is now primarily intended to represent the scarred consequences of war.

Since this sequel’s title isn’t Missionaries, it’s no surprise that early ideological arguments between Rambo and religious do-gooders Michael (Paul Schulze) and Sarah (Julie Benz) are largely pretext for some of the most severely gruesome, visceral action-movie mayhem I’ve ever seen. Women and children are gunned down, limbs are hacked and shattered, skulls explode, and heads are swiftly decapitated, a cornucopia of nastiness meant to prove Rambo’s point that the only reaction to genocide is equally vicious hostility. He’s tortured about this belief, as well as his understanding that he kills not for righteous cause but for self-gratification, and his far-off glances strive for poignancy. The film, however, is first and foremost interested in stoking its audience’s bloodlust, which—after Sarah and her aid worker friends are captured—it does rather effectively by depicting Rambo’s rescue mission as a race against time to prevent rape, its chief villain as a cruel pedophile with a taste for young boys, and its Burmese soldiers as the type of cretins who, in the heat of battle, shoot innocent kids before tossing them into raging fires.

Crass exploitation of a serious issue, yes, and also the type of comic-book cartoonishness that the series has always peddled, regardless of the grim aesthetic and tone employed throughout this installment. Rambo’s decision to go after Sarah is cast as a cynic’s gallant attempt to safeguard genuine idealism, even if said idealism doesn’t strike him as a practical solution to the world’s monstrousness. Yet from its chosen real-world conflict—in which, unlike the more complicated fight against Islamic terrorism, blunt militarism seems a reasonable tack to take—to the sight of Matthew eventually confirming Rambo’s opinion that “When you’re pushed, killing’s as easy as breathing,” the film stacks the deck in favor of brutal aggression over pacifism. And that m.o., in turn, reveals Rambo’s inner torment and pessimism (“Fuck the world,” he grumbles at one point) as so much hot air, a pretense that the proceedings are about investigating the personal toll of combat rather than eliciting excitement from the finale’s free-for-all carnage. In Rambo, violence may be unpleasant and may not get you the girl, but it most definitely and awesomely wins the war.