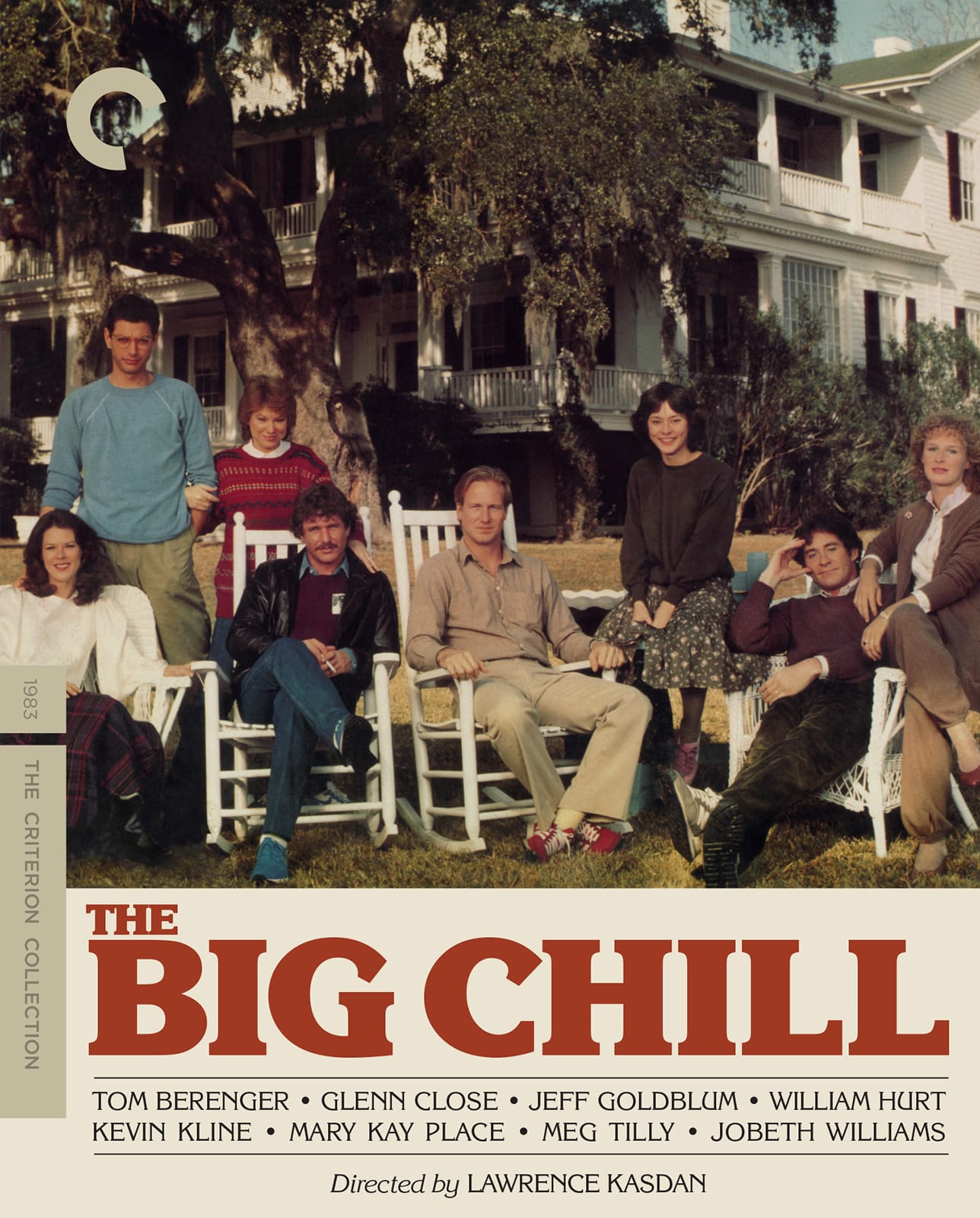 Lawrence Kasdan’s The Big Chill begins in a bathtub, as Harold (Kevin Kline) washes his infant son. The young boy sings Three Dog Night’s “Joy to the World,” a song that returns at the film’s end, once Michael (Jeff Goldblum) says, “We took a secret vote. We’re not leaving. We’re never leaving.” The cleansed innocence of the infant body arrives full circle to the stubborn insistence of thirtysomething immortality in Kasdan and Barbara Benedek’s script, which finds a handful of friends reuniting at a “summer house” after a funeral in Beaufort, South Carolina, following a fellow University of Michigan friend’s, named Alex, suicide. Yet nothing’s as pure in Kasdan’s film as Michael’s disingenuously stated resolution via corporeal conviction, since The Big Chill prides the song, and not the body, as its central object of obsession. That infatuation largely derives from the film’s corpus of white-bread urbanites, whose engagement with the past is located either through lip-service incarnations of prior selves or favorite music tracks from college, the latter of which haunts the film like a mantra, as if trying to ward off the impending terrors of old age and dead companions.

Unfortunately, Kasdan and Benedek are beholden to nostalgia, churning out characters whose dulled sense of both self and irony is surpassed only by the pandering and indulgent soundtrack, which functions like a mixtape of the most fetishized order. Kasdan attempts to guise this decidedly commercial choice through the proclivities of his characters, but the wager is wafer thin. Harold puts the Temptation’s “Ain’t Too Proud to Beg” on the record player and is instantly stoked by the track; earlier, when he insists on listening to Procol Harum’s “A Whiter Shade of Pale,” Michael tells him there’s been some good music made in the last decade, to which Harold offers, “Like what?” Such feigned criticisms of these characters’ insularity finds only bullish footing in the script here or, in an earlier scene, when Harold and Sam (Tom Berenger) discuss Harold’s recent business expansion: Sam says, “Who would’ve thought we’d both make so much bread? Two revolutionaries,” to which Harold responds, “Good thing it’s not important to us.” Finally, Sam retorts, “Fuck ‘em if they can’t take a joke.” The ambiguity of each character’s statement, with regard to the sincerity of their aims, isn’t a clarification of middle-class resentment, but a snide coveting of it, much like the ways music symbolizes not struggle or perseverance, but background noise to smoke pot to. When Karen (JoBeth Williams) plays the Rolling Stones’ “You Can’t Always Get What You Want” at Alex’s funeral, claiming it to be “his favorite song,” there’s no sense of what the song actually meant to Alex; it’s merely an outro for Kasdan’s cultural funeral procession.

If Kasdan canonizes the white male egotist in all of its possibilities, from the fiscally conservative Harold, to the coke-snorting Nick (William Hurt), to Michael, a wily journalist, and Sam, an actor whose alcoholism is not-so-subtly suggested by the four vodka tonics he downs on the flight from Los Angeles to Beaufort, then the women typically have one mode: dedicated-wives-cum-liberal-humanists. They govern, especially as directed by Kasdan, a male fantasy of simultaneous open-mindedness and servility, sexual yet motherly. No singular shot better indicates this than a tight close-up on Sarah’s (Glenn Close) swiveling ass while dancing to the Temptations. Thus, she’s capable of dancing but also of intense emotion, as when she has a panic attack while showering. Kasdan doesn’t show the attack, only her cowering at the back of the shower, clutching her quivering knees to her chest. It’s the same woman who, late in the film, will give Meg (Mary Kay Place) the go-ahead to fuck her husband, Harold, due to Meg’s desire for a baby and ticking biological clock.

Such gestures, while transparently masturbatory enough, are made worse by Meg’s description of Harold as “the perfect man,” a notion all the more questionable given that Kasdan has openly admitted Harold is based upon himself. Such an autobiographical puzzle piece locks in the film’s self-obsessed derivations, as Kasdan, himself a graduate of the University of Michigan, anchors an elaborate narrative in which Harold gets the girls, expands his business, and ends the film laughing all the way to the bank, sperm or otherwise.

Kasdan’s offenses stem further, as it’s difficult not to lament the racism endemic to his joyously capitalistic appropriations, in which music from the Temptations, Marvin Gaye, and Bert Berns, all released around the time of the civil rights movement, are deployed as groovy tunes for the weekend getaway of well-to-do white folk, whose awareness of Otherness is something the film chooses not to engage. These matters are perhaps more grave and unforgivable since the film’s Southern setting, at a plantation house no less, engages cultural demons that Kasdan and Benedek have no interest in offering the slightest gesture toward.

The new 4K transfer of The Big Chill lacks the precision of the Criterion Collection’s best Blu-ray transfers, allowing for softer edges and faded coloring throughout, though by no means to an alarming extent. Outdoor scenes fare best, especially given Lawrence Kasdan’s proclivity for establishing shots, as deep focus detail is often remarkably clear. The audio is presented in both English LPCM 1.0 and DTS-HD Master Audio 5.1 tracks, with the latter most likely chosen to more prominently feature the film’s boisterous soundtrack. The mix is actually preferable on the monaural track, since the songs have a tendency to overwhelm dialogue on the surround. However, even when the Temptations or the Rolling Stones aren’t jiving through your speakers, dialogue is mixed at a low volume, which might have you undesirably adjusting the volume throughout.

In terms of quantity, Criterion has offered a bounty of words and thoughts from cast and crew, including the 56-minute documentary from Sony’s 1999 DVD. As quality goes, the lack of any critical insight from someone not from the cast of crew is highly suspicious, which effectively turns the extras into a parade of anecdotes, recollections, and glad-handing about both the production and the film’s enduring status as a cultural landmark. A new interview with Kasdan showcases the filmmaker boasting about his success in Hollywood, stating, “I was able to do exactly the kind of movies I wanted within the system.” Moreover, he aligns himself with Howard Hawks, John Ford, and Frank Capra in this regard, claiming that the relationships between studio and filmmaker “has never really changed.” This is a disturbing, ignorant claim given the presence of game-changing historical monographs like Thomas Schatz’s The Genius of the System, or even basic knowledge of studio reconstruction with the emergence of New Hollywood. Yet, by not offering any sort of challenge to Kasdan’s wholly redundant, totalizing claims, Criterion propagates a flawed notion of film history. Also included is a 2013 cast and crew reunion at the Toronto International Film Festival, a handful of deleted scenes, the trailer, and a booklet featuring a curious work of critical fiction by Lena Dunham and a reprint of a 1983 Film Comment article by Harlan Jacobson.

Jeremiah was a bullfrog and The Big Chill should have stayed on ice, but the new 4K transfer from the Criterion Collection should give fans of the film enough reason to reunite.

Blu-ray Review: The Essential Jacques Demy on the Criterion Collection