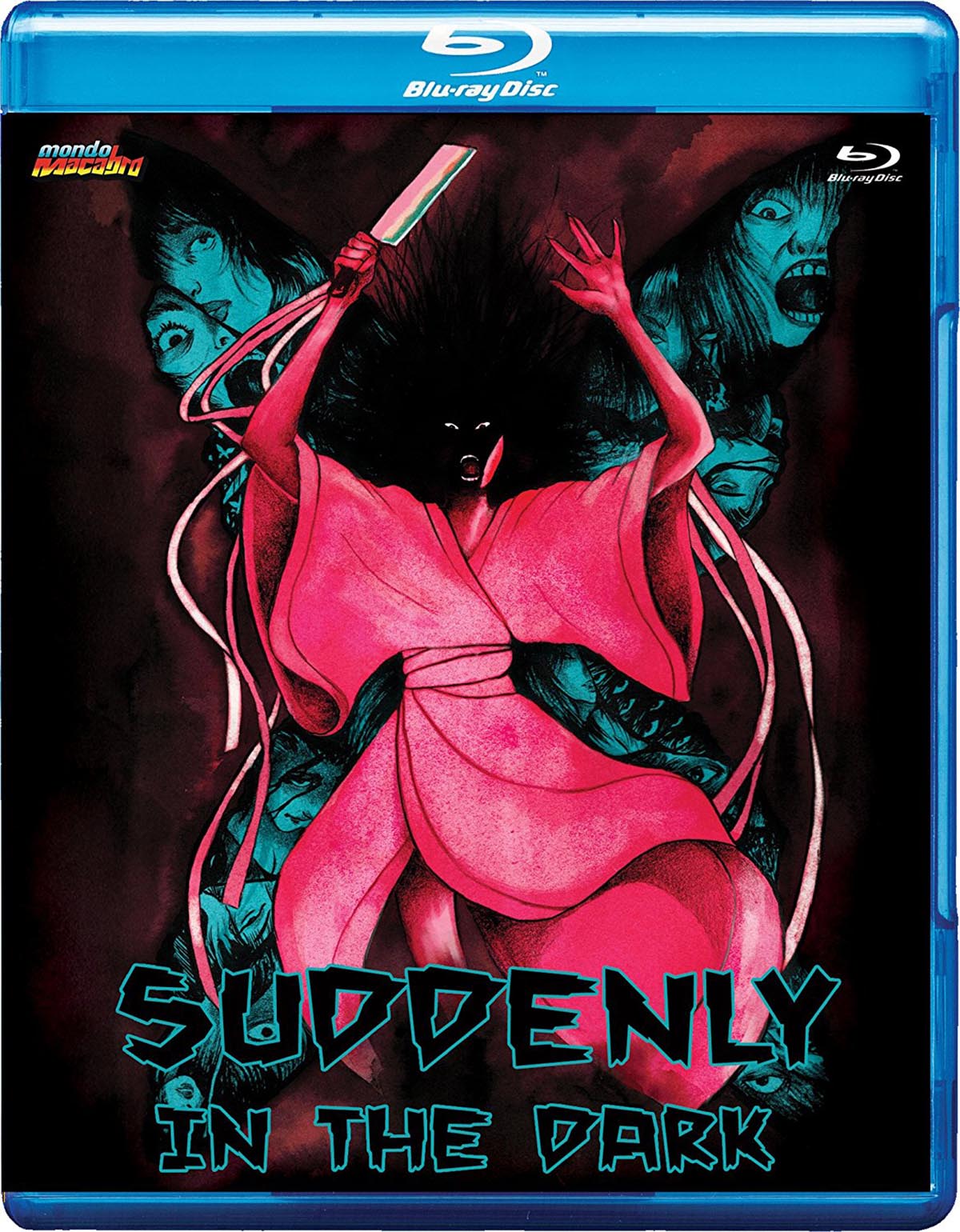 When it comes to gonzo K-horror filmmaking, Suddenly in the Dark stands as a tantalizing bridge between Kim Ki-young’s lurid 1960 horror thriller The Housemaid and the genre’s remarkable recrudescence in the late 1990s. Truth be told, Suddenly in the Dark lifts its domestic triangle straight from The Housemaid, a strategy that wasn’t entirely unprecedented in Korean cinema, since Kim remade his own film at least twice over the next two decades. But Suddenly in the Dark takes the premise into uncharted terrain by folding in elements of folk religion and the supernatural. And director Go Yeong-nam’s outrageous visual style feels entirely sui generis, utilizing a bewildering number of distorted visuals and garish gel-lighting washes to limn his main character’s descent into paranoia and madness.

Seon-hee (Kim Young-ae) lives in a remote three-story manor with her husband, Kang Yu-jin (Yoon Il-bong), a professor of biology who’s often away on long field trips hunting down rare breeds of butterflies. When at home, he’s in the habit of holing up in his study around the clock to work on his latest thesis. Seon-hee’s growing feelings of isolation and neglect aren’t exactly assuaged by a well-intentioned friend who tells her that being 28 is tantamount to turning 60 in the eyes of an indifferent spouse. Things really start to go downhill for Seon-hee when her husband brings home Mi-ok (Lee Ki-seon), an overripe 19-year-old naïf he found “wandering around” in a state of shock after the mysterious death of her mother, a shaman priestess who inexplicably burned to death while performing a ritual.

Though the seeds of her suspicion and jealousy have already been sown, the film slyly suggests that Seon-hee’s growing obsession with Mi-ok has as much to do with her own real attraction to the girl as it does her husband’s imagined infatuation. Seon-hee takes creepily zealous interest in Mi-ok’s cleanliness, and regales her husband later that night with an avid description of her physical endowments. The camera almost physically caresses Mi-ok’s naked flesh in repeated cutaways that voyeuristically ogle her bathroom activities, intended to illustrate Seon-hee’s increasingly feverish imagination.

Like Dario Argento’s Suspiria, Suddenly in the Dark explores tensions between retrograde superstitions and the enlightenment project of modernity. Seon-hee becomes fixated on Mi-ok’s wooden doll, bequeathed to her by her mother in her fiery final moments, which Seon-hee believes to have brought evil spirits into the household. Her husband hears her out, then calmly suggests she see a psychiatrist. He would no doubt concur with the assertion made at one point by Udo Kier’s Dr. Frank Mandel in Argento’s film: “Bad luck isn’t brought by broken mirrors, but by broken minds.” Critic Kim Bong-seok points out, in one of this disc’s supplements, that such tensions were still very much alive in Korean society at the time Suddenly in the Dark was made.

There’s something inherently uncanny—and more than a little creepy—about dolls, and the film’s finale taps into this dread with a protracted standoff between Seon-hee and a life-size replica of Mi-ok’s shamanistic “spirit tablet” doll. The mordant punchline is that Seon-hee has been mortified all along by the danger to her domestic security represented by Mi-ok’s sudden intrusion into the house. Now, in her final confrontation with the embodiment of that fear, Seon-hee practically demolishes both hearth and home. The film’s final shot strongly evokes the “Amelia” segment in Dan Curtis’s Trilogy of Terror, suggesting that Seon-hee has finally become what she always actually was: the real source of danger to be feared.

Mondo Macabro’s restoration of Suddenly in the Dark looks generally bright and vibrant on their 1080/AVC-encoded Blu-ray. Jeong Pil-si’s gel-lighting effects and kaleidoscopically distorted visuals are particular standouts. Lower-lit scenes don’t fare quite so well, yielding pretty heavy grain levels. There’s some damage to the original elements—mostly light speckling but also a few jumps resulting from missing frames and some pesky hairs in the gate jut into the frame. The PCM mono track is serviceable, despite some persistent hiss and one or two synchronization issues. Choi Jong-hyuk’s moody synth score sounds terrific throughout.

There are choice extras here, though the absence of a commentary track that fleshes out the film’s content and approach is lamentable. Film critic Kim Bong-seok discusses the turbulent history of horror filmmaking in Korea from the 1960s to the present day, relating the ebb and flow of its popularity to social and political events. He describes Go Yeong-nam as primarily a director of action films and melodramas, whose sole horror title was Suddenly in the Dark. He also highlights the film’s links to Kim Ki-young’s The Housemaid, and discusses how societal tensions between modernization and “pre-modern” superstitions are reflected in Suddenly in the Dark. Producer David Suh talks about his collaboration with the director over a handful of films in the late 1970s and early ‘80s, and reveals plans to produce a remake of the film. Five minutes’ worth of VHS cover art yields lots of gaudy and bizarre imagery but precious little in the way of context. The ever-expanding Mondo Macabro promo reel is always an enjoyable addendum to the proceedings.

Suddenly in the Dark makes its North American debut with a reasonably strong Blu-ray transfer and some welcome bonus features.