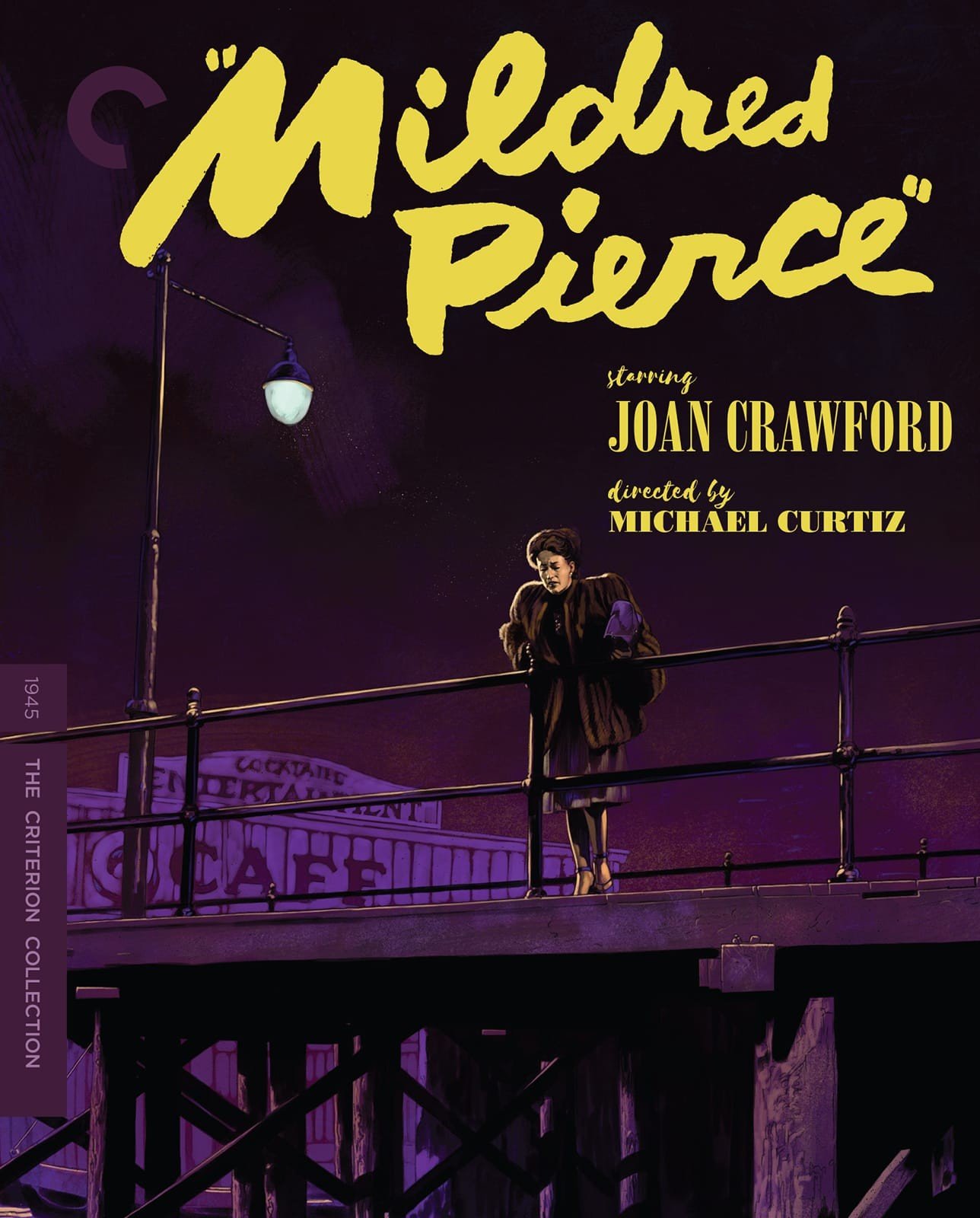 American crime films and pulp writing aren’t normally considered as paragons of feminism, as they often see women as figures of asexualized competency or as femme fatales, those murderous succubae who use sex to socially empower themselves (though the potential necessity of that gambit in a world rigged against women is often under-considered). Distinguishing Michael Curtiz’s Mildred Pierce from many noirs, then, is its disarmingly and modernly casual sense of the reliable humiliation of life as a woman in a man’s world, particularly a woman determined to carve out her own niche in the work sector. Surrounded by ineffectual or conceited men, Mildred Pierce (Joan Crawford) gets a job as a waitress, masters the trade, and sets about opening a restaurant, all while beset by the usual condescension and ogling, which is often dressed up as looking out for Mildred’s best interests.

Mildred Pierce is adapted from a novel by the famed and influential crime writer James M. Cain, and while the film strikingly deviates from the source material’s narrative, it retains the most important element: Cain’s pragmatic grasp of detail, which the author uses to subtly convey a character’s inner and outer world. One reads Cain’s crisp, sober descriptions of the quotidian of the restaurant business and discerns the stakes of Mildred’s drama, as well as the poignant, well-earned pride she derives from enjoying the sort of actualization that’s normally reserved for men who know the right people.

The novel isn’t exactly a noir, but a melodrama in which a woman’s fraught relationship with her daughter reflects her war with her own self-hatred. Curtiz and screenwriter Ranald MacDougall have retained this narrative and added a murder mystery for spice—the sort of gambit that would be at home in many of Cain’s other work. The murder mystery intensifies the central melodrama by employing a kind of formulaic misdirection. People unaware of Mildred Pierce’s reputation may think they’ve initially stumbled upon another 1940s-era flick about a murderous “dame,” their assumptions corrected as the film blooms into an astonishingly beautiful class fable.

Curtiz, an underrated Hollywood craftsman, opens the film with the murder of Monte Beragon (Zachary Scott), whom the audience will learn is Mildred’s second husband, a spoiled weasel living off of his family’s eroding name. Monte is gunned down at his beach house, the only remaining relic of his money, and Mildred sets about framing Wally Fay (Jack Carson), a smooth-talking hustler who never misses an opportunity to proposition her for sex. Curtiz follows Mildred as she plies Wally with scotch and paces the beach house’s various floors, which are rendered in vivid noir chiaroscuro and connected by a spiral staircase—one of the film medium’s classic signifiers of chaos and madness. Mildred and Wally are eventually rounded up by the cops, and Mildred relates her story to viewers in prolonged flashback.

The story is less about Monty’s murder than the relentless rebuffing that Mildred weathers, namely at the hands of her daughter, Veda (Ann Blyth), a pretentious ingrate who resents Mildred’s work while enjoying its spoils. Veda embodies two of a parent’s worst fears: of their child’s hatred, and of the potential justification of said hatred. Veda’s a femme fatale whose wiles have been turned on her own gender and kin, either intentionally or inadvertently representing a woman’s resistance to her own progress. She respects men who coast on their birthrights, while ridiculing Mildred’s remarkable rise from housewife to businesswoman for its roots in manual labor. Veda aspires to entitled uselessness, affirming patriarchal class systems by extension, and Blyth invests her character with obscenely inhuman smugness.

Of course, Blyth is a foil for Crawford at the apex of her powers. Mildred Pierce represented for Crawford what Rocky later represented for Sylvester Stallone: a do-or-die stab at survival in Hollywood that subsumes the star’s autobiographical struggles metaphorically into the narrative. Mildred’s unexpectedly successful quest to reinvent herself mirrors Crawford’s transition from washed-up ingénue into one of the great powerhouse poets of the Hollywood melodrama. Crawford lets her work show, allowing you to feel her desperation to be iconic—her self-consciousness investing her super-stardom with weirdly relatable humanity. Crawford brings to light what a true star does: informing our weaknesses with operatic heft.

The film revels in Crawford’s virtuosic escalation of emotion, in the force of will that she allows Mildred, who correspondingly transcends the masochistic constructs of a typical martyr of a “woman’s picture.” Mildred is a lusty, resilient, calculating, commanding woman—a protagonist of hungry agency who can’t be resolved to neatly serve a political talking point. Crawford’s brilliance is on particular display in the classic scene between Mildred and Veda on the staircase in Mildred’s home, where the extent of Veda’s callousness finally dawns on Mildred, her face remaining eerily tranquil while her eyes reach a boiling point of fury that’s worthy of Greek tragedy.

In this context, Veda’s famous slapping of Mildred registers less as violation than relief, as something to lance the tumorous tension. Registering the slap, Crawford has Mildred cower briefly back into the role of endlessly rejected matriarch, telegraphing her character’s future exploitation while illustrating the personalities warring within a figure who heartbreakingly shares her daughter’s merciless appraisal of her. Crawford isn’t simply playing Mildred Pierce, but every woman who wrestles with the suspicion that their desire is duly punishable by subjugation.

The bold clarity of this image underlines the often-understated (and under-acknowledged) visual polish of Mildred Pierce. This transfer vividly restores the interplay between light and shadow, as blacks are rich and luxurious, while whites are bright without being shrill. Everyday textures—silverware on restaurant tables, a servant’s garishly ugly uniform, smoke wafting from oft-lit cigarettes—are emphasized with a sense of palpable tactility that this critic has never before witnessed in presentations of this film. The famous close-ups of Joan Crawford’s face, complete with wrinkle-reducing spotlights, are gorgeously soft in the intended fashion. (There is unintended softness in some of the landscape compositions, but this scans as inherent to the source materials.) The monaural track is clean and lush, which is especially evident when Max Steiner’s score swells with a heft and body that can’t be taken for granted in restorations of older films. This is beautiful, essential work.

The new conversation with critics Molly Haskell and Robert Polito abounds in astute observations, ranging from the eroticism of Mildred’s attachment to Veda to the general underrating of Michael Curtiz, Joan Crawford, and author James M. Cain. One wishes that Haskell and Polito had been afforded more time though, particularly the former, who’s a shrewd observer of the gender tensions informing Hollywood cinema. The snippet of Cain’s interview with the Today show, from 1969, finds him skillfully evading the attempts of the host to provoke a reactionary rant about the counterculture. Cain clearly empathizes with the “agitators” who object to the Vietnam War, suggesting there’s little difference between the various generations apart from marketing. The snippet from an episode of The David Frost Show with Crawford finds the actress tending irresistibly to the flames of her own legend, while the feature-length documentary, “Joan Crawford: The Ultimate Movie Star,” offers a more than serviceable introductory primer on the arc of her life and career. A Q&A between Ann Blyth and noir expert Eddie Muller is poignant yet comparably skippable. The theatrical trailer and a booklet featuring an essay by critic Imogen Sara Smith round out a package that’s diverting and evocative yet capable of expansion. (How about the rest of those interviews with Cain and Crawford, respectively, to start?)