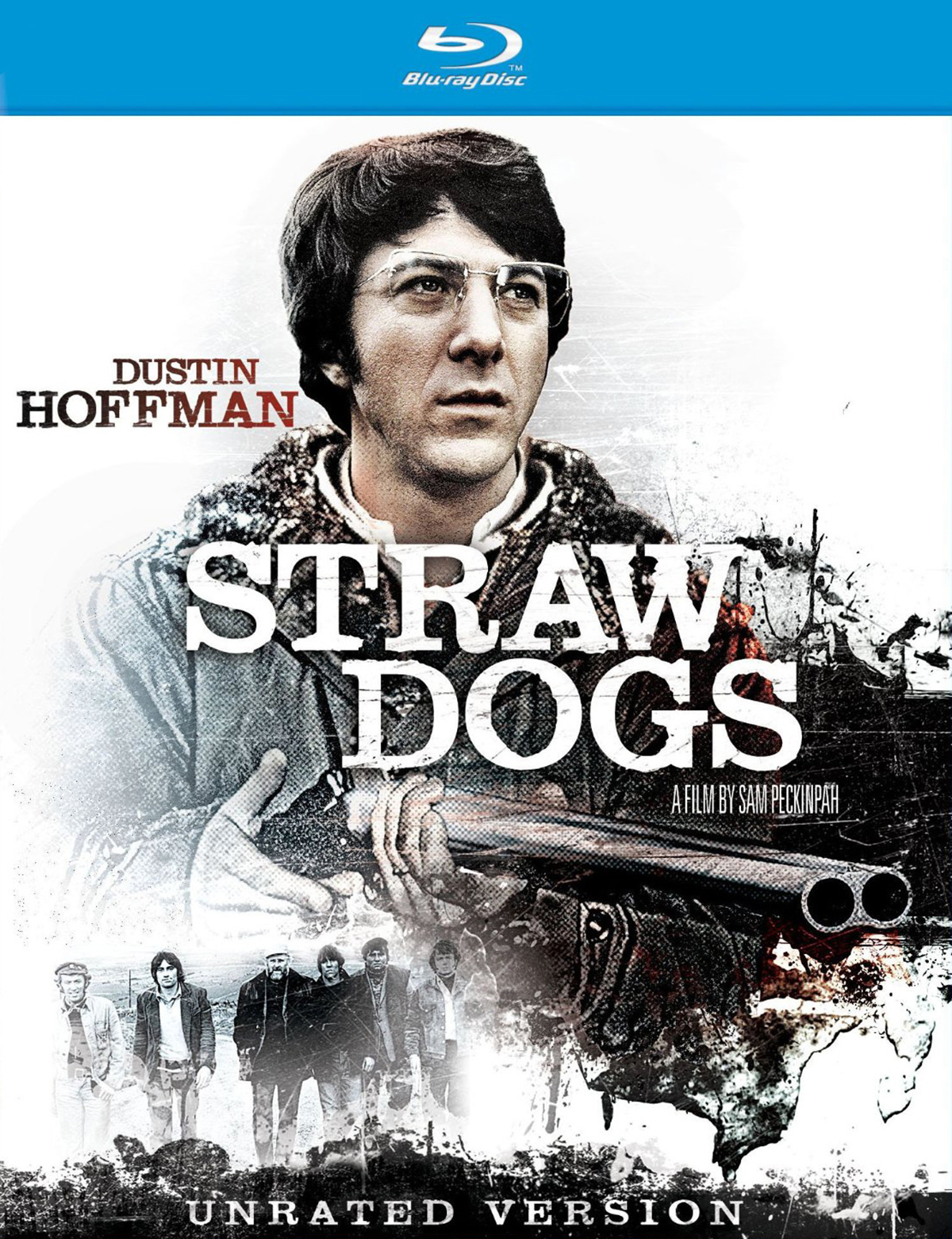 The drink had taken Sam Peckinpah fully by 1970 and there’s more than enough evidence that the demon had always been there, but Peckinpah had been able to hold it down until the catastrophic production of The Ballad of Cable Hogue, which ended 19 days over schedule and three-million dollars over budget. Set in the isolated desert landscapes of Nevada, The Ballad of Cable Hogue speaks to a quiet and distinctly American despair, a fear of failure and progress that seems incredibly apt considering the stress that Peckinpah faced following up The Wild Bunch. In this film, the violent, bloody sturm und drang of The Wild Bunch moved inward on Jason Robards’s melancholic title character, but after the considerable loss of money and lateness of the production, Warner Bros. wasn’t very interested in Peckinpah, new or same old, and he was essentially banished from Hollywood and sent across the pond to England.

So, the story of Straw Dogs, in which David Sumner (Dustin Hoffman), a mild-mannered American mathematician, faces humiliation and violence when he moves to the English countryside where his young wife, Amy (Susan George), grew up, has its own haunted, personal weight for Peckinpah, giving nuance and dimension to the film’s already pitch-black moral abyss. One could look at Sumner, with his constant avoidance of physical and verbal conflict, as the Peckinpah of The Ballad of Cable Hogue, attempting to showcase his ability to work without the visceral thrill and catharsis of violence, but also suppressing the ugly, unhinged beast within to the point where it’s cornered and must lash out.

Thus, as David attempts to ingratiate himself in the local community, made up largely of people Amy spent her formative years with, he passively accepts their bullying and condescension, comforted by the fact that he has his workroom to return to and isolate himself in. It doesn’t help that the men who so happily belittle David are those who are fixing his barn, fronted by Norman (a menacing Ken Hutchison) and Charlie (Del Henney), the latter of whom has a bit of romantic history with Amy. So, when Charlie and Norman leave David in the middle of a hunting trip to sneak back to his home and ferociously rape Amy, there are more complications than just that much-touted moment when it seems like she’s accepting of her violation, if not outright enjoying it.

David’s obsession with control over his space, an odd and fascinating preoccupation fused into the script by Peckinpah and David Zelag Goodman, and apparently influenced by the writings of Robert Ardey, makes for a neat house but a lousy sex life, and Peckinpah smartly plays that up in the extended rape sequence. It’s easy enough to see that while she eventually comes to accept and even control Charlie in the sequence, whom she may very well still be in love with, Norman is uncontrollable and it’s the addition of his violation of her that makes the sequence so elusive in its meaning and impervious to moralistic certainty.

David never finds out about the rape, but Amy’s flashbacks—bracingly invoked through Peckinpah’s work with editors Paul Davies, Tony Lawson, and Roger Spottiswoode—cause them to leave a community function later. At the same moment, the town pervert (the great David Warner) tries to sneak off with the town nymphette (Sally Thomsett) and ends up choking her to death in Steinbeckian fashion when the town starts coming after him. The confluence of events that brings David to take in the pervert and hide him from Charlie, Norman, and their cronies is nothing if not unlikely, but it’s a well-orchestrated bit of business and, of course, leads to the exhilarating climactic siege on Sumner’s house, wherein the beast in David finally has its day.

As Peckinpah had it, however, the beast was always in David’s head, drawing the bullying locals in with his passiveness and therefore giving him free reign to kill all of them when they try to enter his home. I can’t say that I agree completely with the reasoning, but there’s certainly something to be said about the fact that there are no outright likable people in Straw Dogs. Cynical to the bone, the film reconfigures the home-invasion plot of the source material (Gordon Willaims’s The Siege of Trencher’s Farm) as less a paean to old-fashioned, hard-bitten justice than a study of masculinity and man’s most basic instincts toward crude violence. Indeed, the film’s title derives from a line in the Tao Te Ching, wherein man’s indifference to the killing of his fellow man is related to God’s indifference to the life and death of man.

Behind all of this, however, is Peckinpah’s masterful direction, and as much as there is an argument to be made that Straw Dogs ostensibly works as a resituated western, there’s no denying that the film offered him new challenges that he faced head-on. The sprawling, desolate landscapes, ghost towns, and tiny villages that he had shot with such bloodthirsty exactitude are here traded in for crowded pubs, close-knit towns, and that cluttered house, which anchors the film’s aesthetic in dull-colored claustrophobia. Cowboys, townspeople, vigilantes, and villains, once stock characters in Peckinpah’s canon, are simply plainspoken in comparison to the brooding, encoded exchanges that pepper Straw Dogs—and, of course, there are no good guys to be found in Peckinpah’s England, only men capable of summoning immense, imposing horror and hiding their truest intentions under the flakey crust of kindness.

Fox has done an excellent job upgrading both their own previous DVD release and Criterion’s DVD release of Straw Dogs with this impressive 1080p/AVC-encoded transfer. Sam Peckinpah’s dark, corroded color scheme has been well-maintained and it’s likely the clearest the picture will ever get without losing that lovely level of grain. Fine detail is admirable throughout, especially when it comes to clothing and the interior of David and Amy’s home. There are moments of softness and a few white specks, but I imagine this is more the fault of the original print than it is Fox’s problem. The audio is equally excellent, showing off a thoroughly impressive balance between atmosphere, sound effects, and dialogue. The dialogue is out front and consistently clear. Jerry Fieldings’s solid, if uninventive, score sounds fantastic.

Unless you’ve been looking forward to revisiting the trailers and TV spots for Straw Dogs, the disc offers nothing in the way of extras.

Fox gives Sam Peckinpah’s ferocious near-masterpiece a killer visual/audio upgrade, but offers nothing in the way of context with a barren supplemental section.