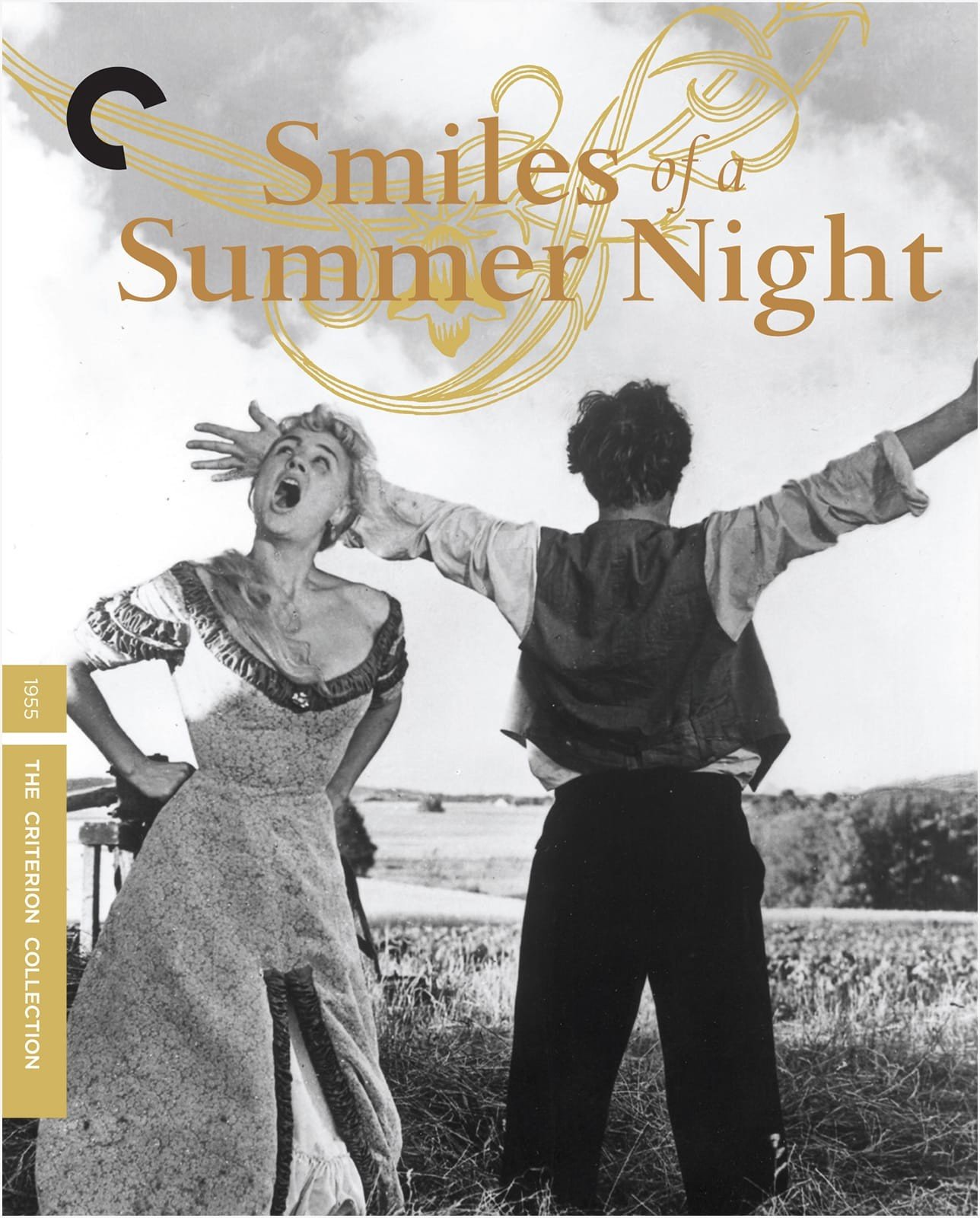 Ingmar Bergman’s Smiles of a Summer Night boasts a sturdy group of technical workers, a uniformly brilliant cast, a perpetually witty and nuanced script, and above all else, smart, clear-sighted direction from Bergman, but there’s also an essential madness to it. Even in its unerring philosophical insights into sexuality, romance, and male and female psychology, the film’s humor and deep warmth are only fully palpable due to the sublime lunacy that runs underneath it all, erupting in passages of lustful exuberance. In telling the tale of mismatched lovers left to their own devices on a two-day trip during Sweden’s brief summer cycle, Bergman imbues the material with a personal confliction between his darker, more dreary existential proclivities and the earthy, gregarious humility that he yearns to fully embrace: a simple life full of simple pleasures.

Such is the life of Petra (Harriet Andersson, in one of her greatest roles), a maid who mercilessly flirts with both the head of her household, Fredrik Engerman (Gunnar Björnstrand), and his theologically inclined son, Henrik (Björn Bjelfvenstam), on a near-daily basis. To Fredrik, her flirtations are wonderful trifles, sweet but useless in the face of his recent marriage to 19-year-old beauty Anne (Ulla Jacobsson, evoking thoughts of a young Mia Farrow), whose itching virginity has become a passive-aggressive issue for both. To Henrik, Petra is an object of lustful desire, an irresistible affront to his Lord and Savior, but his heart beats especially for the young Anne, who obviously cares for him as well. Such intermingling would be enough to send any house into tumult, but the place is only truly wrecked when Fredrik’s old flame, the actress Desiree Armfeldt (the stunning Eva Dahlbeck), who has come into town doing a production of a comedy of manners and dragging around a young boy who might well be Fredrik’s son and Henrik’s half-brother.

After a rousing, nightlong tête-à-tête with Fredrik, which includes a run-in with her current lover, Count Malcolm (Jarl Kulle), Desiree launches a plan meant to unfold on her mother’s expansive estate during a brief holiday. Her aim is nothing less than driving Fredrik back into her arms while pairing up Henrik with Anne and reuniting Count Malcolm and his ice-queen wife, Charlotte (Margit Carlqvist). And while the rich enjoy their perverse rituals and games, Petra enjoys a frolic with Desiree’s servant, Frid (Åke Fridell), a pot-bellied man with a humongous laugh and a thirst for beer. Bergman doesn’t push hard on the upstairs-downstairs dynamic, but he ingeniously pairs theatrical interior shots of the rich with hugely cinematic moments outside between Frid and Petra, chasing each other around the estate when they’re not lounging on piles of hay outside a nearby windmill.

This isn’t to say that the moments inside Mademoiselle Armfeldt’s mansion aren’t beholden to cinema. The great Gunnar Fischer served as DP here, as he would for most of Bergman’s films made in the 1950s, including The Seventh Seal, Wild Strawberries, and Monika, and his compositional use of black-and-white photography is one of the chief pleasures to be found here. The use of light in a crucial scene, in which all the vacationers sit down for dinner and cups of wine laced with breast milk and semen, adds depth and menace to Bergman’s wondrous dialogue. As a writer, this is one of Bergman’s boldest works and certainly his most generous, with barbed guffaws laid throughout the proceedings and constant intermingling that never seems needlessly convoluted or drawn out. Bergman plays it all out under the umbrella of locating what exactly the definition of love is and what exactly does it mean to the foolish hearts that desire it above all else.

Comedy would always appear in small tufts even in the dreariest of his films, but Smiles of a Summer Night works as an inversion of this, elusively conjuring up moments of intense despair, bitterness, insecurity, and shame before shifting seamlessly back into stately humor. It’s a side of Bergman that we normally only got in bits and pieces, but what was on display in Smiles of a Summer Night maintains a striking vitality that remains undiminished well over 50 years after the film won at Cannes and single-handedly secured Bergman’s funding for The Seventh Seal. It would prove to be one of Bergman’s greatest financial successes, the box-office hit that, along with the critical praise he received for such early masterworks as Monika and Sawdust and Tinsel, boosted his international reputation before The Seventh Seal and Wild Strawberries cemented his legendary status. His characters would become more complex, more submerged in their internal life, but to this day the director has never filmed a single scene with the particular joy that he exudes in the scenes between Frid and Petra. In watching these two poor yet mirthful souls, drunk and overtaken by playful delirium, we are also obliged to gaze upon the gentle man behind the camera, forever distracted by labyrinthine philosophies, but at his most compelling in his modest moments of untarnished jubilation.

Black-and-white films remain something of a specialty for Criterion and this 1080p transfer maintains that reputation wonderfully. Blacks are deep and perfectly saturated while shadow delineation is markedly better here than it was on Criterion’s DVD release of the title. There are no negligible signs of edge enhancement or any other disturbances in the transfer. The audio is equally strong, with Ingmar Bergman’s crisp, witty dialogue and Erik Nordgren’s peppy, full-bodied score mixed and balanced with utter precision. Not a complicated mix, mind you, but fittingly sharp nonetheless.

Like their recent Fat Girl Blu-ray release, Criterion’s Blu-ray package for Smiles of a Summer Night comes with an unusually light load of extras. A short, sweet video introduction from Bergman offers the sight of the writer-director in his later years, musing on how the film changed the course of his career. A becalmed yet fruitful videotaped discussion between Peter Cowie and Jorn Donner on the film’s themes, its production, its reception, and its standing in Bergman’s oeuvre is also worth a look, but that’s basically all that’s offered. Also included: a theatrical trailer and a booklet including Pauline Kael’s original review of the film and a fascinating essay on the film by John Simon.

Ingmar Bergman’s comedy of lust and mismatched love receives a robust Blu-ray transfer and an informative, if relatively light, sampling of extras courtesy of Criterion.