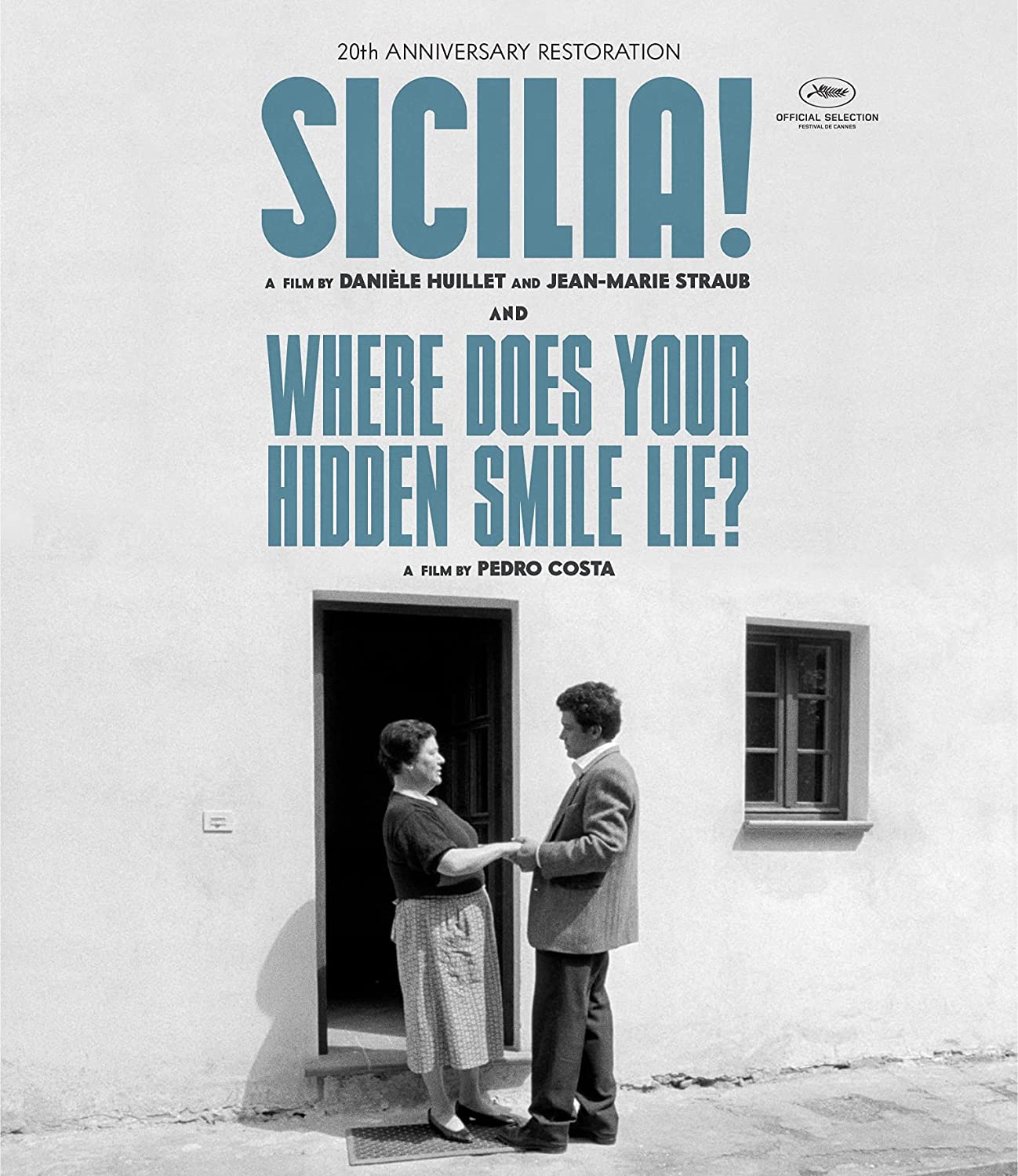 Danièle Huillet and Jean-Marie Straub’s Sicilia! is, like most of the French directing duo’s films, an adaptation—in this case of Elio Vittorini’s 1941 novel Conversations in Sicily. The film bears many of the hallmarks of Straub-Huillet’s style, from nonprofessional actors speaking in a declamatory fashion that makes them sound like town criers even in casual conversation, to the subtly complex images that, with their precise compositions and use of distancing focal lengths, intensely convey the political dimensions of material that tends toward the polemical.

In many respects, though, Sicilia! feels like an outlier in Straub-Huillet’s canon. Centering on the character of Silvestro (Gianna Buscarino), who returns to his Sicilian homeland after years in New York City, the film is the closest that the pair came to making a slice-of-life drama, drifting as it does alongside the man as he’s caught at the crossroads of the region’s past and present, and is confronted by the ghosts of his own past. Straub-Huillet films are often locked into a handful of locations (sometimes a single one, as in 1992’s Antigone), but Sicilia! casts a comparatively wide geographical net as it follows Silvestro’s travels across the film.

Throughout, he interacts with different people whose thoughts range from the quotidian to the political, resulting in a tapestry of voices that reflects Straub-Huillet’s belief that everyday human existence is as much an act of social resistance as outright activism. Thus, a train passenger (Giovanni Interlandi) who engages in nationalist rants about how “every have-not is a dangerous man” can be placed in a continuum with an orange vendor (Carmelo Maddio) who subconsciously speaks to the absurdities of capitalism when he says, “If one does not sell the oranges, there is no bread,” for having to sell one kind of food to afford another.

Straub-Huillet consistently blur the boundaries between the personal and political. Amid Silvestro’s travels, we see a rich liberal attempting to assuage his class guilt by abstractly fantasizing about giving up his wealth and using such thoughts to morally justify keeping it. And at a climactic early moment, Silvestro returns home and engages in a conversation with his mother (Angela Nugara), accusing her of driving away his father before she turns the tables on him. Her monologue charts the turbulent, mutually recriminatory nature of her relationship with her husband, an ostensibly progressive artistic type who was a misogynist while her uneducated farmer father was a dedicated socialist who was always there to help.

From a purely aesthetic point of view, Sicilia! may be Straub-Huillet’s most rapturously beautiful work. From the opening shot of Silvestro silhouetted as he gazes out over the Mediterranean, William Lutchansky’s black-and-white cinematography offers richly ordered images in which bodies are placed in compelling relationships with one another, small tricks of light and shadow evoking the novel’s allegorical account of encroaching fascism in Italy.

Silvestro in particular is almost always framed in a way that emphasizes his distance from his ostensible countrymen, highlighting the alienation that his emigration has engendered between him and other Italians. This is true even in the scene with his mother: Silvestro is placed at the edge of the frame, within a door frame so that he’s only halfway into the same room as his mother and his face is obscured in shadow. As Silvestro is put in his place by the woman, he becomes just one more object in the frame, and the austerity of the composition reflects the bluntness with which the mother destroys the son’s chauvinistic assumptions.

As singular and radical as their formal and thematic obsessions were, Straub-Huillet’s debt to classic Hollywood filmmakers, most especially John Ford, is evident in Sicilia!, one in a long line of Fordian treatises on the relationship between civilization and nature and how the latter shapes the former as much as the other way around. And the use of contrasting shots along the same x-axis in the final scene shows off a use of focal lengths that bridges the flagrant falsity of Brechtian approaches with the immersive nature of Ford’s subliminal expressionism.

During a conversation between Silvestro and a knife grinder (Vittorio Vigneri), the filmmakers keep cutting between two angles that are only mildly different in composition but differ greatly in depth, one using a lens that captures the rising staircase behind the men as it recedes into three-dimensional space and the other collapsing the depth of field to make those stairs resemble a flat wall. The contrast sharply delineates the knife-sharpener’s position within his hometown as one figure in a real space from Silvestro’s status as a kind of tourist in his own home, able to see Sicily as a projection but unable to situate himself within its dimensions. For all the pleasantry of the two men’s conversation, it ends the film with a disquieting confirmation of the protagonist’s eternal detachment from his roots.

The film’s rich black-and-white cinematography looks wonderful on Grasshopper Film’s transfer, which is sourced from a 20th anniversary digital restoration. Black levels are consistently deep and show no signs of crushing, and textures are superbly defined with an intimate level of detail. Straub-Huillet films, like The Chronicle of Anna Magdalena Bach, tend to feature soundtracks with exaggerated separation between elements, and the audio track here renders each of these sounds clearly and without murky overlap.

Grasshopper’s disc pairs Sicilia! with director (and superfan) Pedro Costa’s making-of documentary Where Does Your Hidden Smile Lie? An entry into the long-running French series Cinéma, de notre temps, the documentary reflects that program’s history of reflecting their subjects’ aesthetic techniques by framing Straub-Huillet’s editing bay in static shots in which they loudly pontificate about their thought process and roam the narrow space of the frame. In testament to just how seriously the filmmakers take every shot and cut, Costa’s documentary runs fully 40 minutes longer than Straub-Huillet’s film. As hilarious in its snapshot of an old married couple bickering lovingly as it is fascinating as a treatise on editing, Where Does Your Hidden Smile Lie? isn’t so much a supplement as a masterpiece in its own right. It, too, is included with a new restoration, maximizing the limited detail of the early, standard-definition digital camera that Costa used to shoot it.

Grasshopper Film’s latest Straub-Huillet release boasts a sharp A/V transfer and is supplemented by one of the greatest films ever made about the filmmaking process.

Homos in Distress: Two from the Film Society of Lincoln Center Series “1968: An International Perspective”