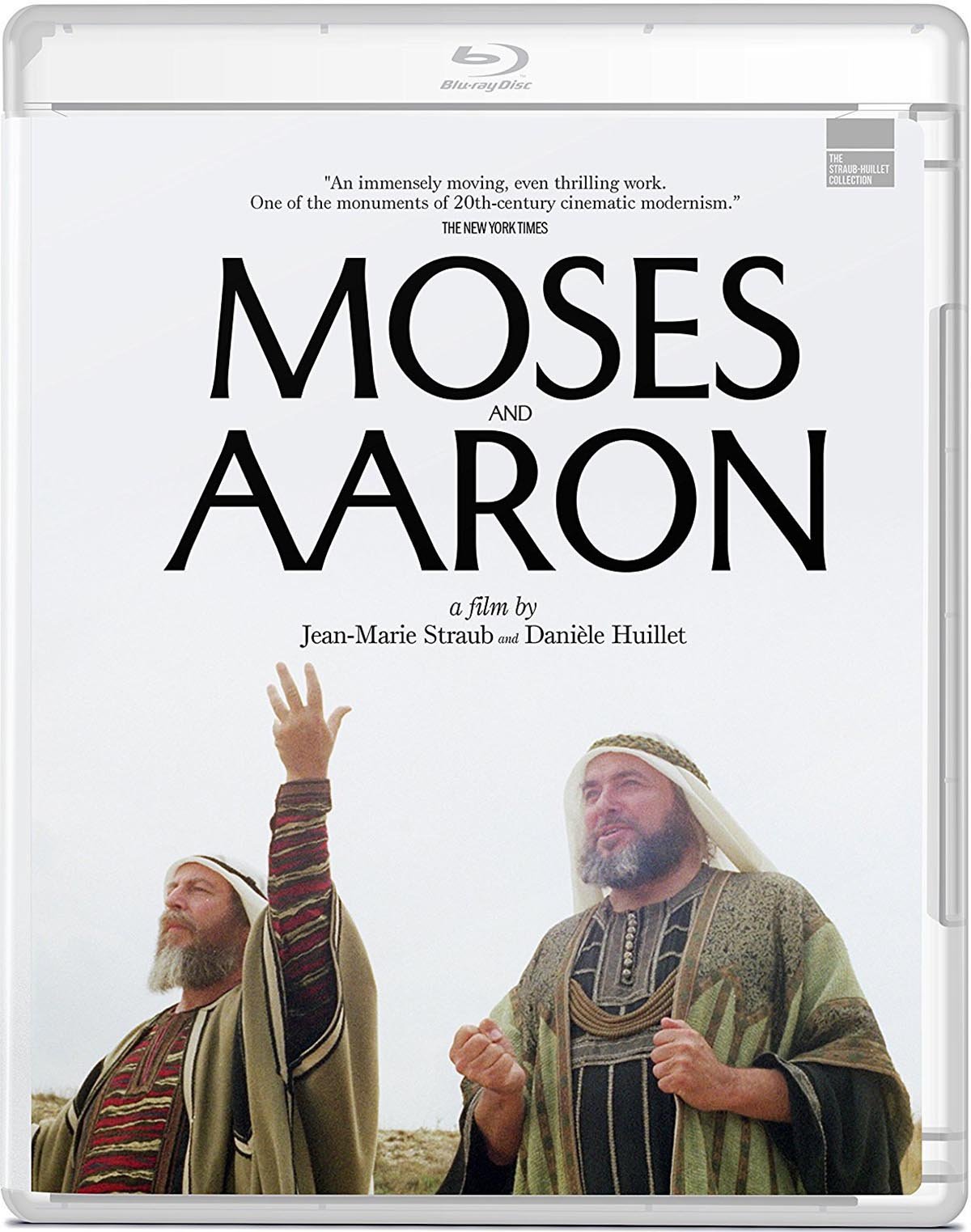 Among Jean-Marie Straub and Danièle Huillet’s most accessible works, Moses and Aaron, an adaption of Arnold Schoenberg’s opera about the story of Exodus, is nonetheless daunting in its formal rigor and subject matter. Schoenberg’s rigid composition, written using his 12-tone technique that equally privileges each note in a scale, paradoxically produces a sound that gives the impression of aimless cacophony, a contradiction befitting the music’s approach to God as an unfathomable and chaotic being.

The contrasting vocal styles of Moses and Aaron’s two main characters similarly encapsulate their respective personalities and beliefs. Moses (Günter Reich), chosen as God’s mouthpiece despite suffering from a stutter and intense fear of public speaking, rarely sings his lines, instead speak-intoning in guttural tones that lend his rhetoric a touch of hectoring bluntness. His brother, Aaron (Louis Devos), is far more charismatic, as evinced by his full, elegant tenor, the rich timbre of which immediately captivates crowds who eye Moses with suspicion. Eventually, that contrast comes to reflect a growing schism between Moses’s concept of a pure God beyond definition and Aaron’s attempt to frame God in populist terms to appeal to the Hebrew masses.

Straub-Huillet’s aesthetic austerity, at first blush almost comically simplistic, only further complicates the Schoenberg opera’s cerebral illustrations of character and ideology. Moses and Aaron’s first shot, for example, introduces Moses facing away from the camera in three-quarter profile, addressing an unseen party gradually understood to be God. The shot, a high-angle close-up of the back of Moses’s head, dwarfs him against the unseen, surrounding presence of divinity. The camera eventually moves, tilting up to follow Moses’s line of sight and revealing him to be standing in the ruins of an ancient amphitheater. Straub-Huillet use the landscape to suggest the limits of man’s creations compared to those of the natural world, as well as the possibility that Moses is an amusement for God, a being who could easily lead his own people without the need of an avatar but uses mortals to fulfill the moral parameters he invented. Contrast that initial view of Moses with isolated shots of his recruitment of his brother: Aaron, doubtful of a divine presence, is seen in profile in his one-shots, while Moses appears directly facing the camera, projecting an authority beyond his natural confidence.

Such moments of formal exposition define Moses and Aaron. The growing mob mentality of restless Israelites is depicted across a series of shots that place people first in scattered arrangements of three or four singers floating in and out of sync before the gathered individuals turn into grouped clusters, then one teeming whole, shouting and demanding in unison. The people present a unified front of doubt to Moses and Aaron, whose performance of miracles corresponds to the first tracking shot of the film, the camera curving around Aaron as he turns his staff into a snake—a motion that mirrors the theatricality of his demonstration of God’s power.

The sweeping movement that accompanies that display of supernatural power contrasts heavily with the static frames that capture Moses’s less demonstrative sermons, illustrating the film’s tacit analysis of the distinction between ideology and its communication. The purity of Moses’s faith, which views even the slightest attempt to define God using understandable terms as an act of heresy, only attracts others when filtered through the showmanship of Aaron, whose own capacity for vulgarity makes him relatable to masses. This conflict between having ideas and communicating them could be the crux of Straub-Huillet’s entire body of work, which uses literary, political, and philosophical texts as its bedrock, makes Moses and Aaron one of the most crucial films in understanding the filmmakers’ oblique oeuvre.

Grasshopper Film’s 2K restoration renders Moses and Aaron’s naturally lit landscapes with bright clarity. The dark greens of trees on Italian hills look lush and deep, while the sun-bleached deserts of Egypt pop with bright tans. The amphitheater where many scenes take place is so detailed that you can make out the various shades of dirt and decay that mark the passage of time on the crumbling structure. The lossless mono track is clear, robust, and well balanced, accurately rendering the intentional cacophony of the music’s arrangement of instruments and vocals while keeping individual players distinct enough to highlight the intricacy of Schoenberg’s composition.

This disc notably includes three important early shorts by Straub-Huillet. Machorka-Muff, the duo’s first film together, tracks a former Nazi colonel whose casual postwar affairs with the wives of subordinates come to stand in as an outlet for his nostalgia for duping and manipulating the petit-bourgeoisie. Not Reconciled shatters the straightforward structure of Heinrich Böll’s source novel, Billiards at Half-Past Nine, using jumbled timelines to juxtapose Germany in its pre-WWI prosperity and post-WWII economic recovery, finding more similarities between the two than many could like to admit. The clearest companion piece to the main feature, Introduction to Arnold Schoenberg’s “Accompaniment to a Cinematographic Scene” from 1972, reenacts a letter from Schoenberg to his painter friend Wassily Kandinsky in which he addressed the mounting anti-Semitism working its way through Weimar Germany, as well as the legacy of Germany’s defeat and the many costs of war. The disc also contains a trailer for the main feature, as well as a booklet with an essay by filmmaker and translator Ted Fendt that explores how Straub-Huillet reproduce their source material with exacting faithfulness while also radically challenging its form to better analyze the text.

Grasshopper Film makes an immediate impression with the first entry of their massive Straub-Huillet reissue series with a gorgeous 2K restoration of Moses and Aaron and three of the filmmaking pair’s early short films.