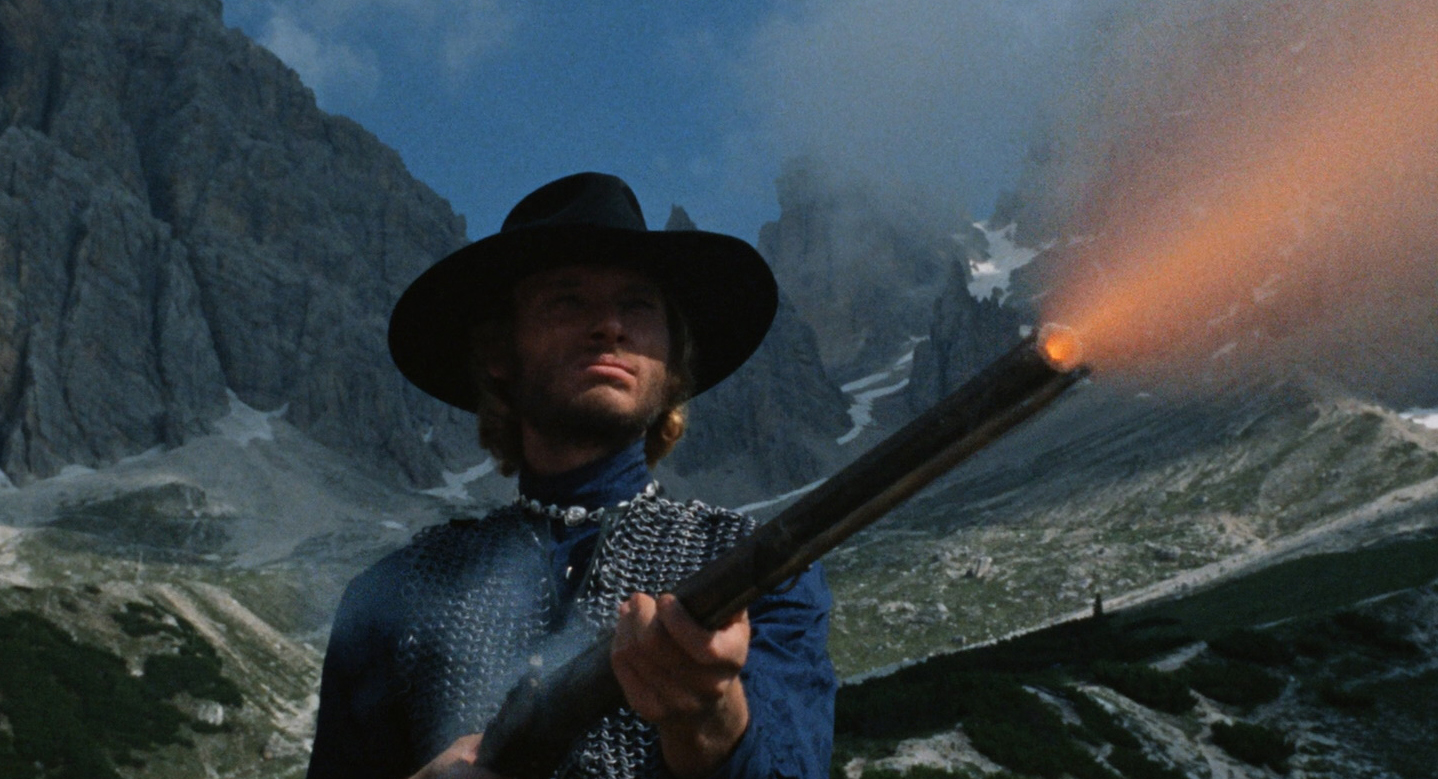 The landscapes of Sergio Corbucci’s spaghetti westerns—be they the isolating, snow-swept mountains of The Great Silence or the arid, dusty terrains of Django, The Hellbenders, and The Specialists—serve as brutally expressionistic backdrops to an Old West where concepts like justice, honor, and community are the things of folk tales. Greed and vengeance are the governing forces in these unforgiving cinematic worlds, where loyalty only goes as far as a dollar has bought it. Even the sanctity of the dead isn’t honored, with coffins serving as camouflage for Gatling guns in Django and a safeguard for counterfeit money in The Hellbenders. Corbucci’s vision of the West is a Darwinian hellscape of dog-eat-dog maneuvers, double crosses, and ruthless displays of violence. If his films border on nihilistic, it’s only because the Italian director’s portraits of bloodlust and insatiable cravings for money cut to the core of the true American frontier values that still reverberate in our culture today.

Early in The Hellbenders, Joseph Cotten’s Colonel Jonas, a Confederate soldier looking to fund a reboot of the just-ended Civil War, and four of his loyal soldiers murder an entire battalion of Union soldiers carrying half a million dollars that’s to be destroyed before new money can be printed. Following the slaughter, Jonas coolly walks up to his men, shoots the two who aren’t his blood relatives, and, with a fistful of bloody cash in his hand, gleefully states, “A fresh start, boys, a fresh start.” The myth of the West is typically propagated by tales of redemption, ingenuity, justice, and hard work, but Corbucci subverts that myth by presenting the notion of the “fresh start” offered by the American frontier as one which necessarily courts violence, greed, and theft. Money and land are the currencies in the land of opportunity and no amount of integrity and diligence can do as much to help get your hands on either as a bullet.

If family appears to be the sole unifying force in The Hellbenders, even that’s only for a spell, as there’s power in numbers when trying to navigate a coffin full of stolen cash through enemy territory. Where the coffin that Django’s protagonist drags around is cracked open to literally unleash a furious flurry of bullets, the one escorted by Jonas and his sons (Julian Mateos, Gino Pernice, and Angel Aranda) in this film more insidiously cultivates violence through temptation, as its contents warp the minds of everyone who remains in its orbit. Money is the inexorable temptress, more pernicious than the devil himself. Late in the film, a drifter, responding to the question of where he’s from, says “From under a rock. That’s where they say we all begin, crawling out from underneath something.” Corbucci’s view of mankind is one where the rock has just been lifted and all the horrifying instincts of humanity are revealed.

The Specialists opens on a similar image of debasement, with a group of Mexican raiders throwing four men into a pit of mud followed by a dollar coin, with whoever retrieves the dollar remaining the sole survivor. In rides a mysterious man in black, Hud (Johnny Hallyday), to save the day, but as soon as the bandits are run out of Blackstone, we learn that the supposed hero isn’t welcome here either, as his brother was recently lynched for robbing the town’s bank. This time around, money isn’t in a coffin, but buried somewhere in Blackstone, yet its very presence has the same destabilizing effect on all of the townspeople.

Signifiers of civilized behavior abound in The Specialists, from the town’s pacifist Sheriff Gedeon (Gastone Moschin) and seemingly upstanding banker, Virginia (Françoise Fabian). And along with the return of their stolen money, even the townsfolk seem to only want law and order. But while Hud and a one-armed Mexican bandit, El Diablo (Mario Adorf), appear as the likely villains, greed spreads like an airborne disease throughout the film, ultimately infecting the whole town with a callous sense of self-preservation.

As Corbucci masterfully navigates through a series of double-crosses, he strips away his characters’ veneers of civility, tolerance, and virtuousness to reveal the nasty impulses lurking beneath. When the filmmaker shows a group of proto-hippies forcing all of Blackstone’s citizens to strip at gunpoint and crawl in the dirt, it’s a stark condemnation not only of American greed and opportunism, but of the ways those evil, barbarous inclinations are often deceitfully couched in supposed pursuits of peace, justice, and social order.

Sergio Corbucci’s The Hellbenders and The Specialists are now available on Blu-ray.