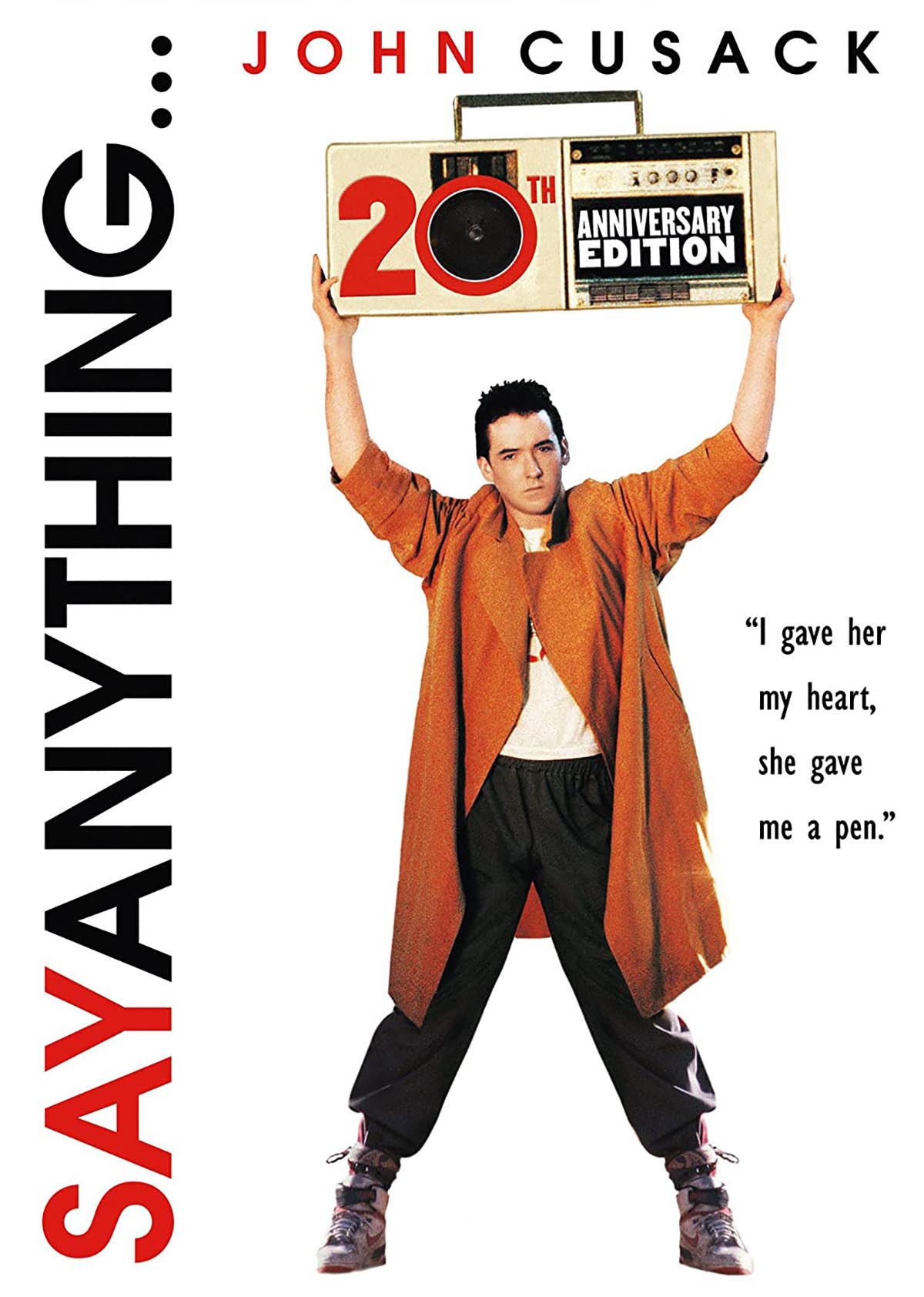 Beyond supplying John Cusack with the iconic role of his career as the gallant 19-year-old Seattle kickboxing fanatic Lloyd Dobler (and his iconic pose of holding a boombox aloft to retake the heart of the girl he loves), Say Anything… was a singularly three-dimensional teen romance after a decade of broad gags and breakfast-club stereotypes in John Hughesland. Cameron Crowe, making his directorial debut, retained the antic affection for youthful eccentricities of his Fast Times at Ridgemont High screenplay and, abetted by a breakout performance by Cusack, laid an undertow of desperation and self-doubt in the hearts of all his main characters. Lloyd, charming and seemingly comfortable in his own skin, whether enforcing his duties as “key master” at a high school graduation blowout or declaring he wants no part of “anything sold, bought, or processed” for a career, craters into “I feel like a dick” misery when the scholar-princess Diane Court (Ione Skye), after a whirlwind affair, splits from him. Diane—valedictorian, fellowship winner, and conscientious aide in the nursing home her father (John Mahoney) manages—fears the future and broods over her image as “a priss.” The nefarious side of Mr. Court’s possessive devotion to his daughter’s success is soon uncovered by the IRS. And the most supportive of Lloyd’s boho-girl confidantes is a drama-queen guitarist (Lili Taylor) who writes 63 songs about the boy who stomped on her heart.

“I wanna get hurt!” Lloyd proclaims at the movie’s outset of his quest to land the golden girl, and after playing the early courtship and vacillating “friendship with potential” of its odd couple for rich but digestible comedy, Say Anything… ups the agony inherent in first love when Lloyd’s salt-of-the-earth appeal to Diane (“I’ve never gone out with someone as basic as you”) is tempered by her fear of getting close to him and the increasing displeasure of her dad-in-crisis. Mahoney’s duplicitous pop is a vital source of love and a formidable obstacle for Cusack’s swain, capable of listening to Skye’s intimate confessions and manipulating her image of Lloyd as a “distraction,” until he’s seen crouching fully clothed in the bathtub after his doom is sealed. Lloyd’s logorrheic “nervous talking thing” is vintage Cusack but seems more pitiable and stalkerish when he’s leaving run-on, post-breakup messages on the Courts’ answering machine. Crowe gives each of the lovers a family cocoon—for Lloyd it’s his abandoned sister (cannily, Joan Cusack) and young “playmate”-nephew—they’re used to nesting in when not looking askance at their peers or mastering their domains of achievement (academics and kicking the heavy bag) and now must weigh abandoning—for England, for the army, for each other.

If the boombox image reduces Say Anything… too neatly to the province of sappiness, thanks partly to Peter Gabriel’s mildly schlocky “In Your Eyes” as Lloyd’s musical plea (and given Cusack’s tears and backseat case of the quakes, it’s inevitable that an emo band named itself after the film), the movie’s ample heart, and plausible arrival at a happy (though slightly open) ending without making a monster of Diane’s rogue parent, is indeed what carries it. Though the heroes of Crowe’s subsequent films have usually been older, they invariably turn out less mature and seductive than young Dobler, a notable creation of filmmaker and actor. As for Lloyd’s pining for a “dare-to-be-great situation,” Cusack has seemed adrift since his last trademark Peter Pan role in High Fidelity; at least the audience’s last glimpse of him here, clinging to Skye and suffused with hope, makes a disappointing future thoroughly unimaginable.

Say Anything. may not have the cachet of Easy Rider in Laszlo Kovacs’s filmography, but the color and sharpness of his cinematography here look miles better than what’s usually lavished on even a quality romantic comedy, from the graduation party’s kaleidoscopic fashion wreckage to the detail in the night scenes (such as the most emblematic of John Cusack-getting-drenched-by-rain tableaus). The two available English sound mixes, with Cameron Crowe’s now familiarly fastidious use of diegetic pop music, are crisp and rockin’ (save for some fairly drippy scoring by Richard Gibbs and Anne Dudley).

For this 20th-anniversary edition, Fox has supplied two short new supplements. Crowe, still bubbling like the teenage rock journalist he was almost 40 years ago, expounds on his first day as a movie director (being prompted to shoot coverage and to sociably eat lunch with the crew) and Fox’s initial unease with his script: “Why can’t the dad be a funny good guy?” Yet more trivially, a cross-section of the I Love the ‘80s pop pundits from VH-1 riff briefly (and with what passes, among TV snarkers, for affection) on the movie’s quotability and Lloyd Dobler’s overcoat (what Weird Al Yankovic labels “flasher chic”). Among the slew of deleted, extended, and alternate scenes carried over from the previous Fox disc are nursing-home footage and Cusack improvisations that, indeed, belong in a different movie, but Crowe comments over a series of boom-box-holding takes, noting how his star visibly resists the very concept of the moment until the last shot of principal photography (and that the live tape was pumping Fishbone, not Peter Gabriel). The commentary track with the director and his two leads occasionally becomes a gush fest, but Crowe and Cusack vividly recall their debates on how to balance Lloyd’s optimistic and bleak instincts. Also included are a stills gallery, two trailers, a promotional featurette, and a handful of TV spots.

He gave her his heart, she gave him a pen, and Say Anything… still gives off a sweet, enveloping glow.