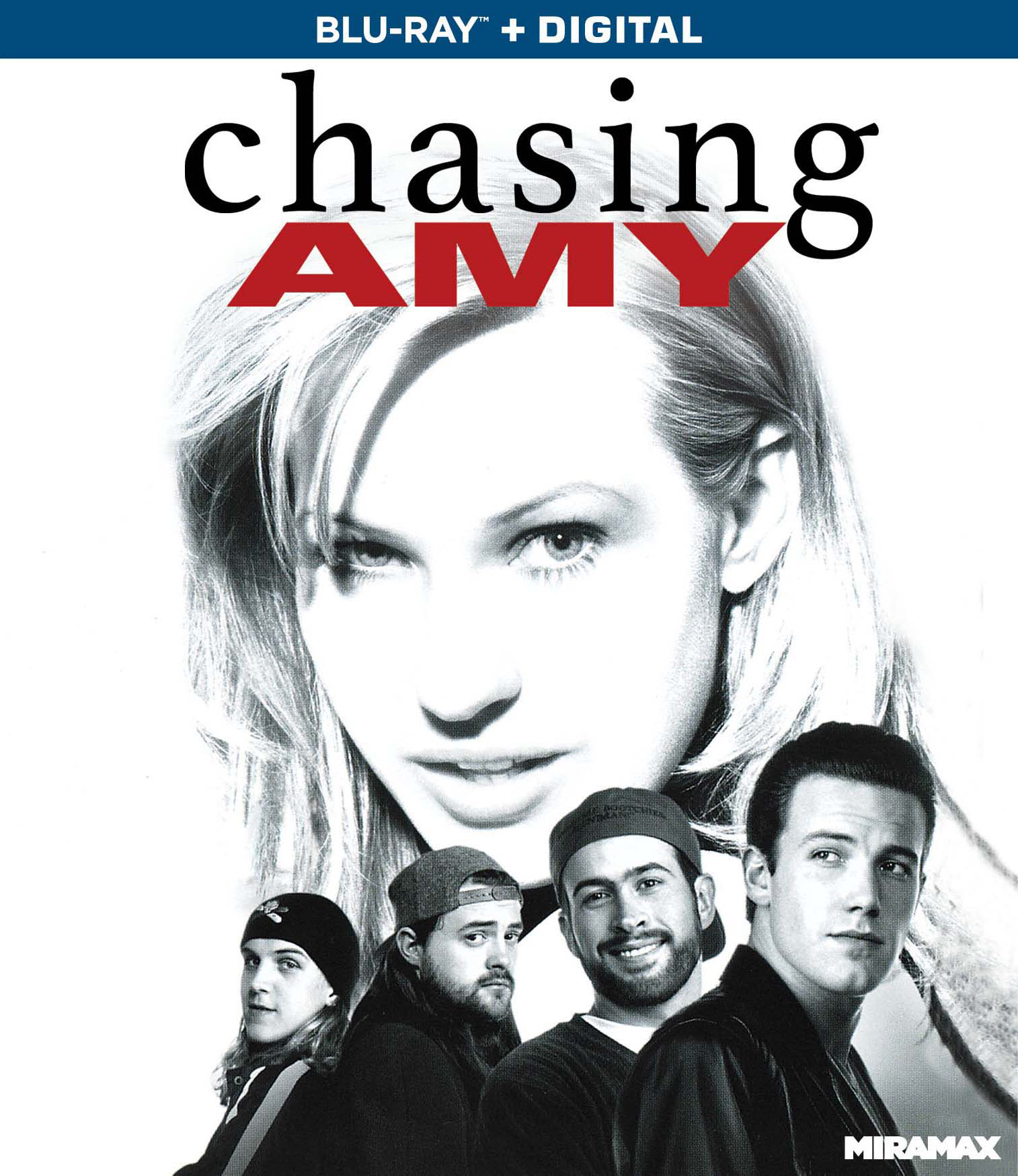 Following the bafflingly popular and over-praised Clerks and the critically reviled Mallrats, schlubby everyman director Kevin Smith turned inward for Chasing Amy, his third film. A fictionalized story that drew upon Smith’s relationship with star Joey Lauren Adams, it introduced to Smith’s work an emotional element completely absent from his first two films. For all its problems, Chasing Amy remains for me the relative high point of Smith’s career, combining some of his strongest writing with an emotional maturity he’s never since been able to match. It’s the film in which he started to grow up. Sort of.

A bland, goateed Ben Affleck stars as Smith stand-in Holden McNeil, a comic book artist who pens the hugely successful Bluntman and Chronic (based on Smith’s recurring slackers Jay and Silent Bob) with his roommate and inker Banky Edwards (Jason Lee). At a comic convention, Holden meets indie comic artist Alyssa Jones (Adams) and is instantly smitten, a response that barely flags when he finds out that Alyssa is a lesbian. The two start as good friends, with Holden silently pining, until Alyssa eventually, implausibly falls in love with him.

The actual narrative of Chasing Amy has nothing to do with Smith and Adams’s relationship. Smith uses his fictional story to examine the emotions stirred by his relationship with Adams, namely his feelings of jealousy and inadequacy toward a more experienced sexual partner. Over the course of the film, Holden learns about Alyssa’s experimental sexual past and is horrified. But where most films would judge Alyssa as a whore, Chasing Amy is sensitive and empathetic. Smith has said the film is his apology to Adams for how he treated her, and it shows. Clerks addressed sex with a teenager’s sensibility, treating it juvenilely and more than a little hysterically. On the other hand, this film understands sex as something that can be both banal and incredibly powerful, as in the scene in which Holden proposes to Alyssa and Banky his idea of how to fix their relationships. It’s the best thing Smith has ever written, funny and painful and human, and it features from Adams the finest piece of acting in any of Smith’s films.

Since Chasing Amy is a Kevin Smith film, it does have some serious problems. When he drifts away from emotion, his dialogue, though much improved from the witless Clerks, still comes off as stilted and self-consciously written, particularly during his mostly painful pop-culture riffs. In these moments, all of his characters sound the same, and not one of them sounds remotely human. And he can’t resist bringing back the relentlessly annoying Jay (Jason Mewes) and Silent Bob (Smith) to explain the film’s big titular metaphor. Silent Bob’s clunky, spell-it-out expository monologue is pretty well written for what it is—but it’s still a clunky, spell-it-out expository monologue.

And though Chasing Amy sees him trying harder than usual, Smith just can’t really direct. The film’s better parts find Smith experimenting a bit with composition and camera movement or the use of color and lighting to evoke mood (check out Holden and Alyssa arguing in the blue neon of a hockey rink). But there’s still a sloppiness to a lot of the direction that seems less charming than simply lazy (note the camera crew clearly visible in a window when Holden confesses his love) and that has, in its way, become part of Smith’s trademark “aesthetic.” Which is a shame, since Chasing Amy suggests that he could do so much better if only he would push himself.

For such a dialogue-heavy film, the sound is a little too muddy, though it’s far from awful. The image quality is more disappointing: Edges are nice and clean, but colors and skin tones are muted and flat, and there’s a ton of noise in the background of the frame.

Nearly all of the extras are exclusive to the Blu-ray release, which is nice. Kevin Smith and Scott Mosier turn in an amusing audio commentary that goes over the film’s critical and public reception, its place in Smith’s filmography, and its personal basis in Smith’s life. Many of these topics are also touched on in “Was It Something I Said?,” a sit-down conversation between Smith and Joey Lauren Adams, in which the director and star discuss their relationship before and during the shooting of the film. Both Smith and Adams are witty and likable, and they share an easy, good-natured rapport. The disc also features a 10-year anniversary Q&A, a meaty feature-length making-of documentary, and a large number of deleted scenes and outtakes already available on the Criterion Collection release of the film.

Kevin Smith’s best film, in a disappointing audio-visual package with some great extras.