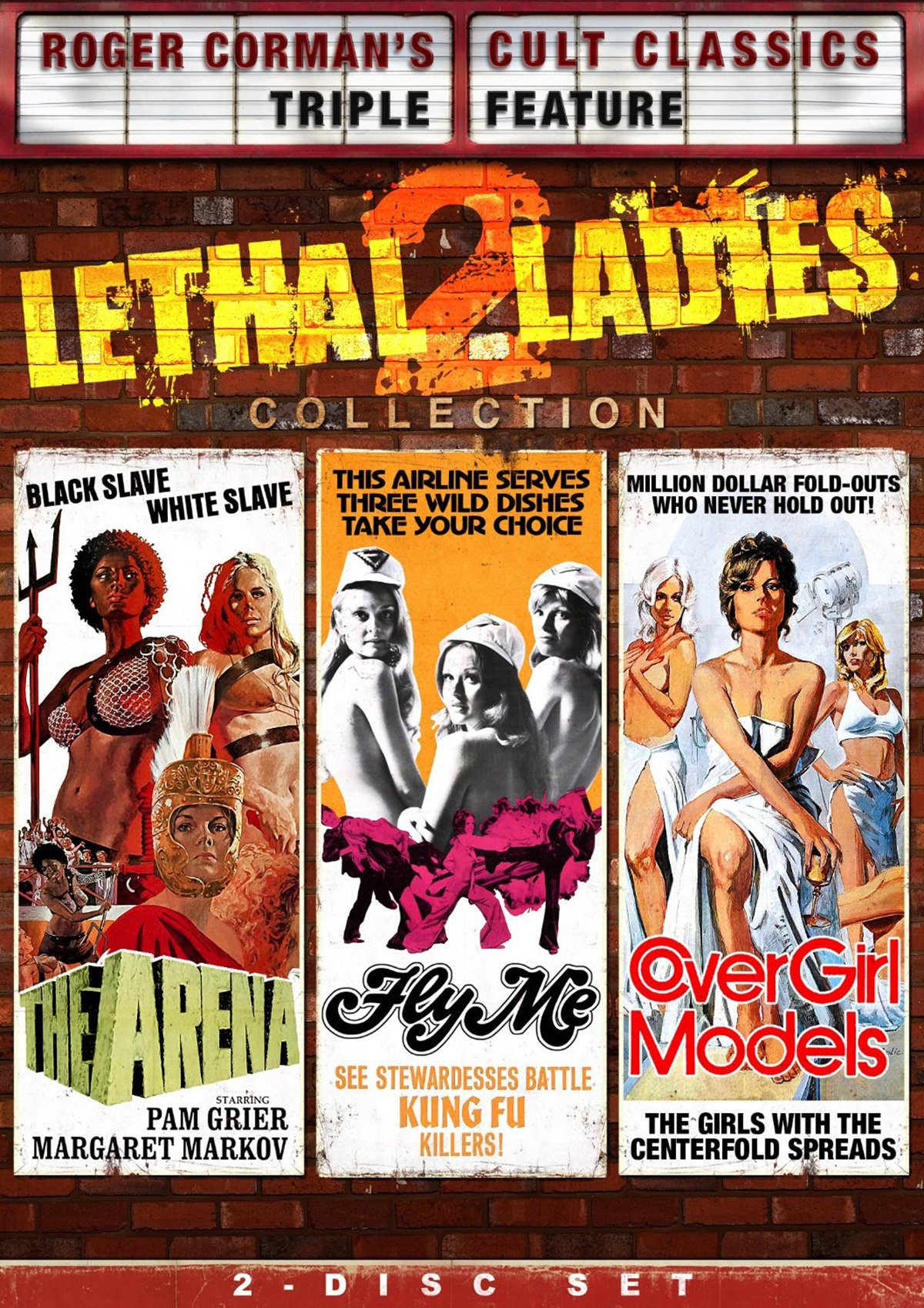 The latest entry in the Roger Corman’s Cult Classics series, these three films hail from a time when the lines between so-called high and low film cultures weren’t so rigidly drawn. At the same time that Corman’s New World Pictures, under whose aegis the films were produced, was cranking out exploitation fare according to set formulas (what’s called “hitting the beats”), the company was also racking up awards for distributing international art-house favorites like Federico Fellini’s Amarcord and Akira Kurosawa’s Dersu Uzala. Often these films were marketed in similar fashion and, in larger metropolitan areas, shown at the same venues. Economically speaking, the relative success of “trash cinema” allowed for the distribution of prestige titles that were less likely to rake in impressive box-office receipts. And then there’s the question of affinity in subject matter. As was the case on the set of The Arena, when Federico Fellini came around, the distance between art-house and grindhouse was never as great as you might expect.

Conceived as a distaff Spartacus, with the interracial buddy-film aspects of The Defiant Ones tossed in for good marketing measure, The Arena reunites leads Margaret Markov and Pam Grier from the 1972 women-in-prison flick Black Mama, White Mama. Indeed, The Arena was marketed in this country as Black Slave, White Slave. (In Italy, it went by the catchier title Revolt of the Girl Gladiators.) Under the opening credits, Celtic priestess Bodicia (Markov) presides over an ethereal religious rite, until Roman centurions bring the buzz kill, slaughtering most of the tribe, and taking Bodicia hostage. Meanwhile, over in another part of the same forest (though it’s supposed to stand in for Nubia), more hijinks are afoot, as feisty Mamawi (Grier) also gets slapped in irons and hauled off. At the slave market, prissy Priscian (Sid Lawrence)—these films don’t have characters in them, so much as types—procures the girls, along with a few others, to serve at the eponymous gladiator arena, overseen by the epicene Timarchus (Daniele Vargas), who’s introduced in flagrante in the midst of an orgy scene that might have been a direct influence on the BBC production of I, Claudius.

When the locals grow bored with the usual blood-and-sand spectacle, Timarchus hits on the idea on letting the ladies go a few rounds, a novelty played for comedy at first, until that too grows tiresome, and our gorgeous girl gladiators must fight in deadly earnest. In keeping with the immutable algorithms of the “women in bondage” picture, this situation forces a little sisterly solidarity on the femme fighters, and they revolt. All told, it takes the film a long while to live up to its Italian title, but it’s entertaining enough along the way. Carver and company eke a lot of production value out of a meager budget. The Arena looks better than it has any business doing: The impressive Technicolor and Techniscope cinematography (lensed by none other than legendary Italian schlockmeister Joe D’Amato, billed under his real name, Aristide Massaccesi), elaborate sets, and detailed costume design all work considerably to its advantage. And, yes, the frequent (let us not say “gratuitous”) displays of bared female flesh don’t hurt either.

With their truncated run times (72 and 73 minutes), Fly Me and Cover Girl Models make an ideal double feature. It doesn’t hurt that they’re also linked by the same director (Cirio H. Santiago), the same settings (triangulated between L.A., Hong Kong, and the Philippines), and some of the same cast (star Pat Anderson, ubiquitous Filipino character actor Vic Diaz). For that matter, they even share the same story: A trio of American beauties, waylaid in exotic locales (or a reasonable facsimile thereof), run afoul of various baddies. Both are rife with wooden acting, knowingly awful dialogue, and plenty of kung-fu action. Of the two, Fly Me suffers (benefits?) from truly lousy editing, as though the film had been cut with a blunt machete and some Super Glue, which the editor was doubtless huffing. The random collision of shots, abrupt shifts in scene, and sundry violations of “invisible” continuity contribute to a kitsch-surrealistic vibe. (Imagine Eisenstein on acid.) And for the true Corman connoisseur, there’s even a cameo from Dick Miller as a leering L.A. cabbie who nearly wrecks his hack because he’s too busy ogling sexy stewardess Toby (Anderson) in the backseat. True, she happens to be changing blouses at the time. When she finally makes her flight (notice how that fuselage goes from deserted to full of passengers seemingly mid-cut), it develops that her overbearing mother (Naomi Stevens) has elected to chaperone. Which might not be such a bad idea, since she’s soon getting moony with Dr. Dave (Richard Young), renowned “bone expert,” while co-pilot Ernie delivers this priceless piece of sightseeing advice: “If you look down to your left, you’ll be able to see the famous Pacific Ocean. And if you look to your right, you’ll be able to see…the famous Pacific Ocean.”

Both Fly Me and Cover Girl Models seem ripe for MST3King. Cover Girl Models is less unruly, hence tamer and less amusing. At least Fly Me allows one of the stewardesses, Andrea (Lenore Kasdorf), to deliver what approximates its ass-kicking. No blows actually land, mind you, and the fights look to have been choreographed like a game of Blind Man’s Bluff, but at least it’s something. Cover Girl Models foists all its fu off on Tony Ferrer, a conventional martial-arts leading man. One moment of unexpected hilarity does occur when an underling receives his walking papers after a failed mission: Opening the door to withdraw, he’s met by another henchman standing there with a machete, who promptly beheads the unfortunate former retainer. Coming so suddenly, managed with such patent falsity, it almost gives you hope that further lowlights may be forthcoming, a promise largely unfulfilled during large slabs of drowsical downtime, until the climactic confrontation finally offers up all the lousily staged hand-to-hand and ducking-behind-shrubbery-to-avoid-gunfire hilarity you could ever want.

Bearing in mind their age and budgetary limitations, both The Arena and Cover Girl Models look pretty presentable, marred only by the occasional, unavoidable artifact. Two brief scenes in The Arena (previously considered “lost”) are here included, transferred in full-frame ratio from a videotape master. Fly Me, on the other hand, is plagued with an infestation of vertical green scratches, precisely the sort of thing that Quentin Tarantino and Robert Rodriquez digitally inserted into their Grindhouse retro rehash. Unsurprisingly, the sound tends to be flat, occasionally hissy, and subject to intermittent dropout, especially on Fly Me. The audio track does a nice job on Fernando De Masi’s lavish score for The Arena, whereas the eminently ‘70s canned soundtracks for the Cirio Santiago films range from soft funk (Fly Me) to smooth jazz (Cover Girl Models), rating high on the cheese-meter.

The Arena gets its own disc and therefore the lion’s share of the extras. Director Steve Carver provides an amiable, listenable commentary track that’s moderated (for whatever reason) by onetime WWE Diva Katarina Leigh Waters. Carver’s focus is on the logistics of a first-time film shoot in a foreign country. In particular, he compliments the leading ladies, who trained to do all their own stunts, and fought with real weapons, not rubber or breakaway props. The 20-minute featurette “Into the Arena” gives equal time to Carver, actor-turned-producer Mark Damon (one of the leads in Roger Corman’s House of Usher), star Margaret Markov (who ended the shoot by marrying Damon), and Corman himself. Corman talks about wanting to inject a little women’s lib subtext into the film, a claim complicated by both Damon and Markov, who discuss the requisite T&A levels in a Corman production, and Damon’s assertion that Corman insisted on personally inspecting the actresses before signing them up. The best anecdote, however, belongs to Carver: At the same time they were shooting the arena scenes on a lot at Cinecittà, Federico Fellini was busy filming Amarcord on an adjacent set. Carver would go over during lunch breaks to watch the maestro film. Later on, Fellini returned the favor, owing largely to his love for watching, as Carver puts it, “big-chested American women fighting.” The second disc, which contains both Fly Me and Cover Girl Models, features only a 30-second TV spot for Fly Me.

Those with an eye for exploitation will want to take a closer look at the second Lethal Ladies Collection, three deep cuts of ‘70s grindhouse titillation, from Shout! Factory.

Review: William A. Wellman’s A Star Is Born Gets Kino Classics Blu-ray