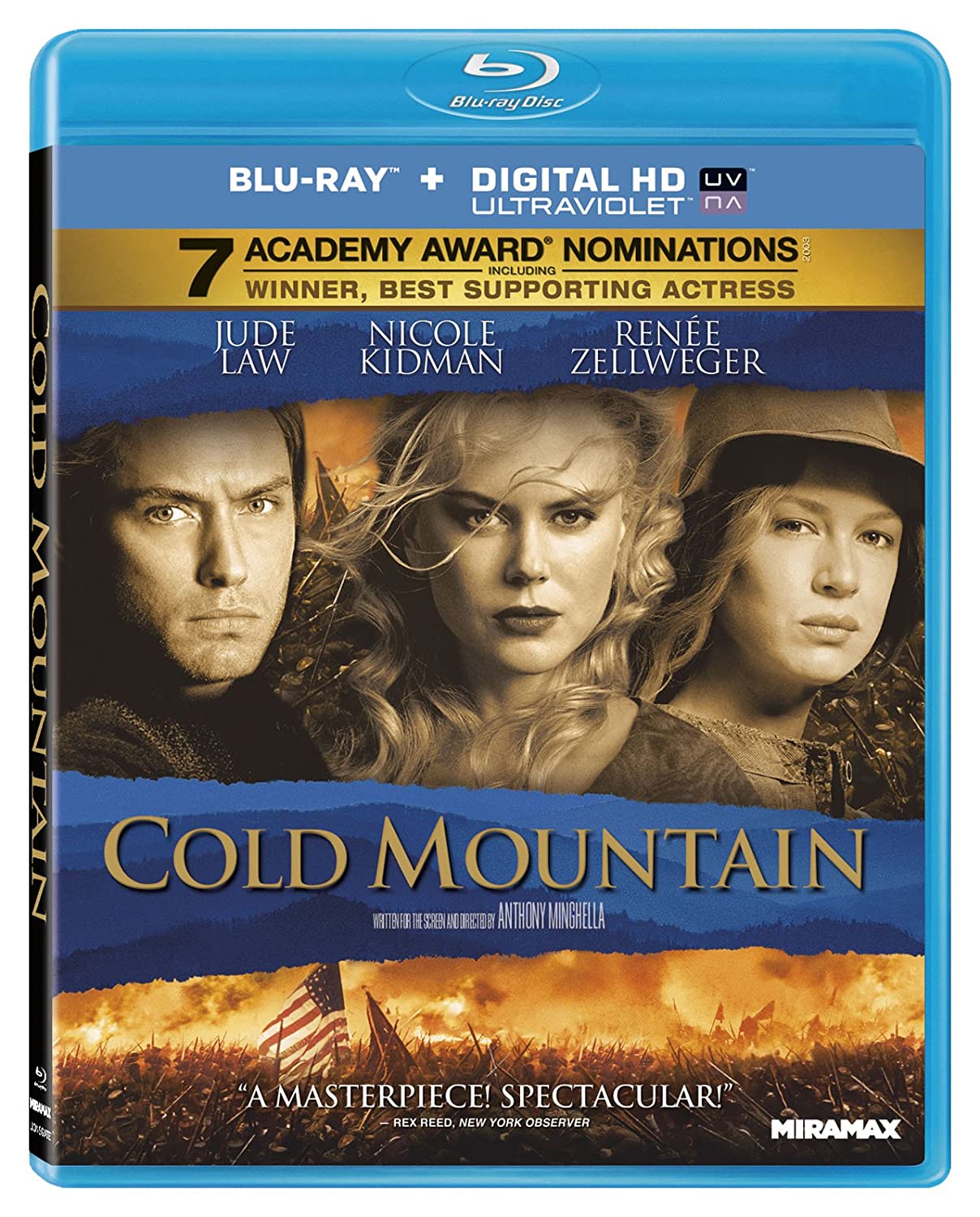 Bloated, pretentious, insufferably earnest, shrewdly calculated, and constructed almost solely for a planned Oscar sweep that was supposed to be as epic as the movie itself (and whose face-palming defeat was only eclipsed when Dreamgirls belly-flopped three years later), Cold Mountain also has the peculiar distinction of being pretty freaking good, at times really good, not so much in spite of its prime ingredients and marketing, but in large part because it’s a great deal more novelistic than absolutely necessary. A surprising amount of the meanness, violence, and self-conscious Odyssey-ness from Charles Frazier’s 1997 historical romance novel makes it into Anthony Minghella’s script intact, leaving you the impression, when it’s over, that you saw far more than a diamond-encrusted, Weinstein-subsidized writer-director treading water.

It works, primarily for the lamest possible reason—it’s a strong story, with something mythic and ancestral about it, like an heirloom of oak and lace—and it’s told well. It works, not because the math is right (though it is), but because the construction is sound. The converging arc of the two forlorn lovers, one wandering and pursued, the other desolate and besieged, is paid for by the trials that keep them apart, threatening their health and well-being. Minghella emphasizes the losses of life, compromises in integrity, and violations of sanctuary that seem to trail the hero and heroine, well above and beyond the notes and percussion that remind us they were in love in the first place. The fact that Inman (Jude Law) and Ada Monroe (Nicole Kidman) are destined to be together is diminished considerably, compared to the forensic degradation of the South’s morality and landscape, so that the big canvas is undercut by the sensation that the film’s environment, inevitably, offers neither safety nor security.

Finally, the superior craftsmanship holds its own pleasures. Made in 2003, Cold Mountain could very easily have been wall-to-wall CGI; that same year, even a “little” film like American Splendor had plenty of cunningly deployed chroma-key backdrops in lieu of real sets. There’s also that Hobbit epic. A sizable amount of Cold Mountain’s exorbitant budget, on the other hand, while not eschewing digital effects entirely, went toward the meticulous recreation of Antebellum architecture, domestic and civil alike, using real planks and buckets of paint to achieve real physical space. The recreation of the story’s environment is richly and lovingly detailed, and bears plenty of the film’s dramatic load as well.

It’s hard to say what exactly it is about Cold Mountain that makes it so robust compared to the lackluster (and inexplicably celebrated) The English Patient, which was stretched thin in its strain for David Lean-like magnitude. It could be something as simple as the comic relief of Renée Zellweger’s Oscar-winning performance, since humor was one of the crucial ingredients that seemed lacking in the 1996 epic. Not counting the slippery mongrel The Talented Mr. Ripley, Cold Mountain remains the late director’s only unqualified success. Ironic that it should have been met with such a cool reception on its release.

Perhaps due to the fact that the Weinstein brothers, the ex-champions of Miramax, have no incentive to look after the show ponies of their past, and that the studio’s catalogue is now in the hands of a couple of private-equity guys, it’s not surprising that the HD job done on Cold Mountain is a whore’s job, efficient and unfeeling. Trouble is, this results in a bit of a trade-off. There’s plenty of detail, especially in compositions that display good contrasts in color and brightness (an early example: the tattered American flag that floats over a pit of doomed Union soldiers), but there’s a milky quality to the image that nags throughout. Blue skies, which get a ton of screen time, look unstable and hazy, and edge enhancement, though discreet, is pretty persistent. Sometimes the movie just looks smudgy; have a look, for example, at the overcast sky before the choir scene (27:44).

It’s largely an “okay” high-def disc, and the blame for why it’s not that great doesn’t land anywhere exclusively. Better bitrate, better materials, better compression? Probably a little of everything. The sound mix fares better. Only one option here (besides Anthony Minghella and Walter Murch’s commentary), the lossless 5.1 DTS-HD Master Audio track well preserves and supports the soundtrack, which beautifully weaves the serene lamentations of the music, the expressive voiceover, and the quiet-loud dissonance of the dramatic sound effects.

Being that this is essentially a do-over of the 2009 Blu-ray, none of the supplements are new, but they’re worthwhile for fans. Most worthwhile is the audio commentary, featuring the well-read Minghella and his legendary editor/sound mixer Walter Murch. A longish making-of featurette (“Climbing Cold Mountain”) gives plenty of spotlight to the film’s production personnel: It’s an aimless, slightly amateur job, but it’s harmless and fairly informative. The more off-puttingly-titled “The Words and Music of Cold Mountain: Royce Hall Special” is actually the better bet, in terms of supplement immersion. In it, you get a combination of a variety show (with performances by T-Bone Burnett, Sting, and Jack White, among others, as well as dramatic readings by Jude Law, Nicole Kidman, Brendan Gleeson, and Kathy Baker) and a classy evening spent with Anthony Minghella, who is interviewed by critic David Thomson. The special, which was taken from a live taping, is strictly for those looking to earn their Cold Mountain black belt, so you know who you are. “A Journey to Cold Mountain” is the second featurette, a slicker, thinner behind-the-scenes doc in the style of HBO’s “First Look” specials. It provides almost no new insights, especially if you’ve already made your way through the other supplements.

If you own the 2009 Blu-ray, and you’re happy with it, there’s no need to subsidize the present custodians of Miramax’s catalogue. Otherwise, you’re welcome to it—or perhaps you’ll wait until the film is dolled up by people who really care about it.

Avatar: The Way of Water Review: An Exhaustingly Splendid Return to Pandora