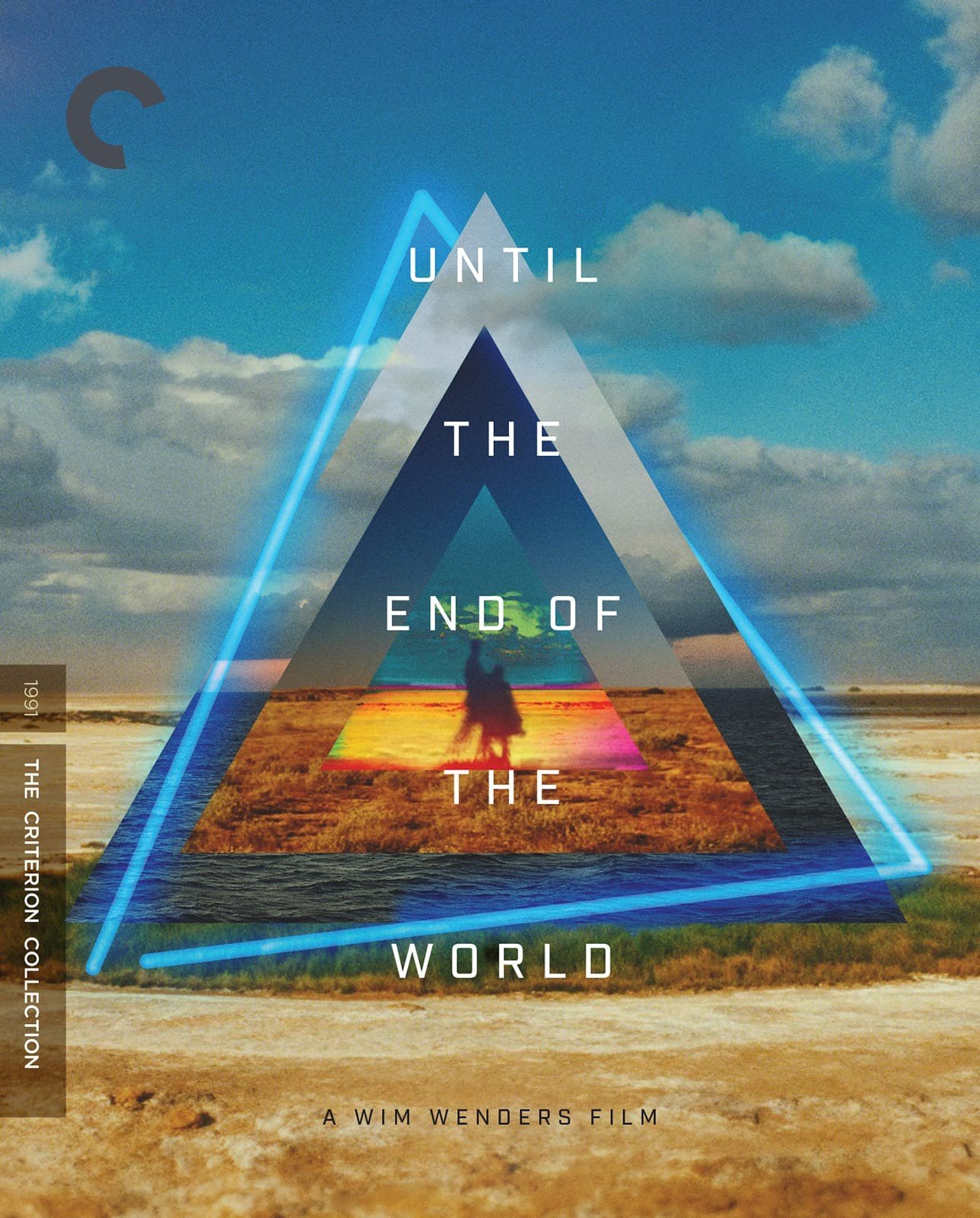 Wim Wenders’s 287-minute sci-fi adventure Until the End of the World has the peculiar quality of being simultaneously elliptical and meticulously plotted. Though the 1991 film features no shortage of contemplative shots of futuristic vistas, both real and virtual, and exhibits an aversion to easy action-flick thrills, the narrative has all the intricacy one would expect of a cyberpunkian tale about the chase for stolen, mind-altering technology. Despite the story’s novelistic girth, most scenes wind up being indispensable both to the plot and to the film’s portrait of a specific, detailed milieu. Which is to say that the whole is akin to a good novel—a comparison that Wenders would likely appreciate, given that his prescient allegory of the postmodern condition ends up, somewhat paradoxically, propounding the virtues of words over images.

The pronouncement in favor of written language is uttered in Until the End of the World by the narrator character, Eugene (Sam Neill), as a kind of conclusion, after he’s witnessed the abyssal attraction that the digital image holds for his ex-girlfriend, Claire (Solveig Dommartin, who co-authored the film’s story), and the new object of her affection, Sam (William Hurt). Enthralled by a head-mounted camera invented by Sam’s father (Max von Sydow) that can read brainwaves—and, as it turns out, convert dreams into digital imagery—the two become obsessed by the potential of reading their unconscious mind’s nocturnal creations.

The images the device draws, presented in full frame in a few boldly experimental sequences, are multifarious, amorphous, and rapturously beautiful. Digital artifacts and posterizations, as a form of auto-animation, appear to imbue the images themselves with life, even as such imperfections obscure the objects actually depicted. These obscure but teeming visions compel Sam and Claire’s intense engagement, and in what’s perhaps the most clear-sighted prediction of the life in digitized society in a film chock-full of them, Wenders has his two principal characters spend much of the final act staring passively into digital devices, oblivious to the glowing orange-red vistas of the Australian Outback they wander through.

Set in 1999, Until the End of the World predicts with striking accuracy such turn-of-the-millennium devices as digital assistants, search engines, and consumer GPS navigation. The social order in which these objects are embedded also isn’t far off the mark. The film’s first half is a road trip through a globalized world auguring a post-Berlin Wall order that bears more than a passing likeness to our own: East Berlin glows with the neon of renewed capital investment; in the Soviet Union, espionage has been privatized; and San Francisco bears witness to the extreme income disparity wrought by the latter years of the Pax Americana.

The road trip that will end in the dreamland of Australia is kickstarted—though without the urgency the metaphor implies—when Claire turns off a French highway to avoid a traffic jam. This detour eventually brings her into contact with Sam, the trench-coat-clad, fedora-topped fugitive whose air of extralegal mystery and neo-noir cool draws Claire to him well before the film reveals its technological MacGuffin. As Sam, Hurt is a bit stiff, as if, like Claire, he’s unclear exactly who Sam is supposed to be—which works, to a degree, in the film’s first half, as the man has turned himself into a neutral medium, a recording device. It will eventually turn out that Sam has stolen his father’s experimental brain camera to collect images of the world that can now be conveyed directly to the visual cortex of his blind mother (Jeanne Moreau).

Wenders grounds Claire’s sudden and intense attraction to the apparent criminal by having Eugene’s detached voiceover narration describe Claire as flighty and adventurous. Such haphazard characterization is a hallmark of Until the End of the World: Wenders consistently proves less interested in a deep dive into the romantic triangle tying together Claire, Sam, and Eugene than he is in an exploration of the image-saturated milieus of the near future, with their omnipresent screens and glowing neon. He underlines the oneiric artificiality of these millennial environments with an expansive and justly renowned soundtrack—featuring songs by the Talking Heads, R.E.M., Peter Gabriel, and U2—that was more successful than the film itself upon release. That Until the End of the World at times comes off as the world’s longest music video arguably suits its project, as to ‘90s intellectuals there was no aesthetic more symptomatic of the forthcoming descent into visual oblivion as that of MTV.

Like Sam’s project, Until the End of the World is itself a compendium of images, with overt allusions to Jean-Luc Godard, Alfred Hitchcock, Yasujirō Ozu, and, somewhat randomly, Johannes Vermeer. Not to mention Wenders’s own previous films: The director’s use of the road as means of contemplating the gulf between image and experience recalls Alice in the Cities and his American breakout, Paris, Texas. If the meat of the film—the envelopment of the protagonists’ consciousnesses, as well as our own, in the chameleonic digital image, the tempting escape into virtuality—doesn’t come until rather late into the film’s 287-minute running time, it’s because Wenders first sets himself the gargantuan task of summarizing the state of the cinematic image at the moment of its eclipse. His film, well at home with the science fiction of its era, suggests that a shift in our means of apprehending the real is also an alteration of reality—the end, one could somewhat extravagantly claim, of the world itself.

The new transfer of the film reveals cinematographer Robby Müller’s strikingly bright but deeply hued color palette in all its glory, from the saturated reds of the futuristic Kiev train station, to the lush greens of the Japanese countryside, to the dusty gray of bougie-bohemian Parisian apartment buildings. Wim Wenders, who oversaw the film’s restoration, makes best use of the remastered 5.1 soundtrack during the music sequences, using the more robust mix to create a greater sense of envelopment. By comparison, the film’s environmental sounds and dialogue are mixed flatly, but given how frequently songs appear under scenes, the disc assures an aural experience that’s overall on par with its visual one.

With this double-disc Blu-ray, Criterion offers an expansive but well-curated selection of extras organized around a few through lines. First, and lending itself to a certain auteur-worshipping romanticism, is the production history of the full Until the End of the World cut, which came in at the current length of 287 minutes. The film’s producers demanded severe edits, forcing Wim Wenders and editor Peter Przygodda to reduce the running time to 158 minutes. Wenders’s efforts to save his original vision are detailed in Bilge Ebiri’s illuminating booklet essay, a prolix title card that runs before the film, and in the filmmaker’s introduction for this Criterion release, as well as in an interview from German television from around the release of the director’s cut to German DVD in 2001.

Then there’s the film’s experimental use of digital video, so we get 1990 special from Japanese television featuring Wenders working on the pioneering digital footage shot for the film in Sony’s Tokyo-based labs. And finally there’s the hit soundtrack, so we get an additional booklet essay by Ignatiy Vishnevetsky, adapted from a longer (and highly recommended) piece from The A.V. Club, that celebrates the unabashed hipness of Wenders’s musical taste, and a documentary about the recording of Nick Cave’s “(I’ll Love You) Till the End of the World” that provides fascinating glimpses of Berlin immediately after the fall of the wall. A bit out of place are a series of “deleted scenes” that are really 20 minutes of extended scenes and B roll.

A film at once hip, quirky, and serious-minded, Until the End of the World remains a hypnotic yet foreboding look at how the proliferation of images and media technology affect the mind.