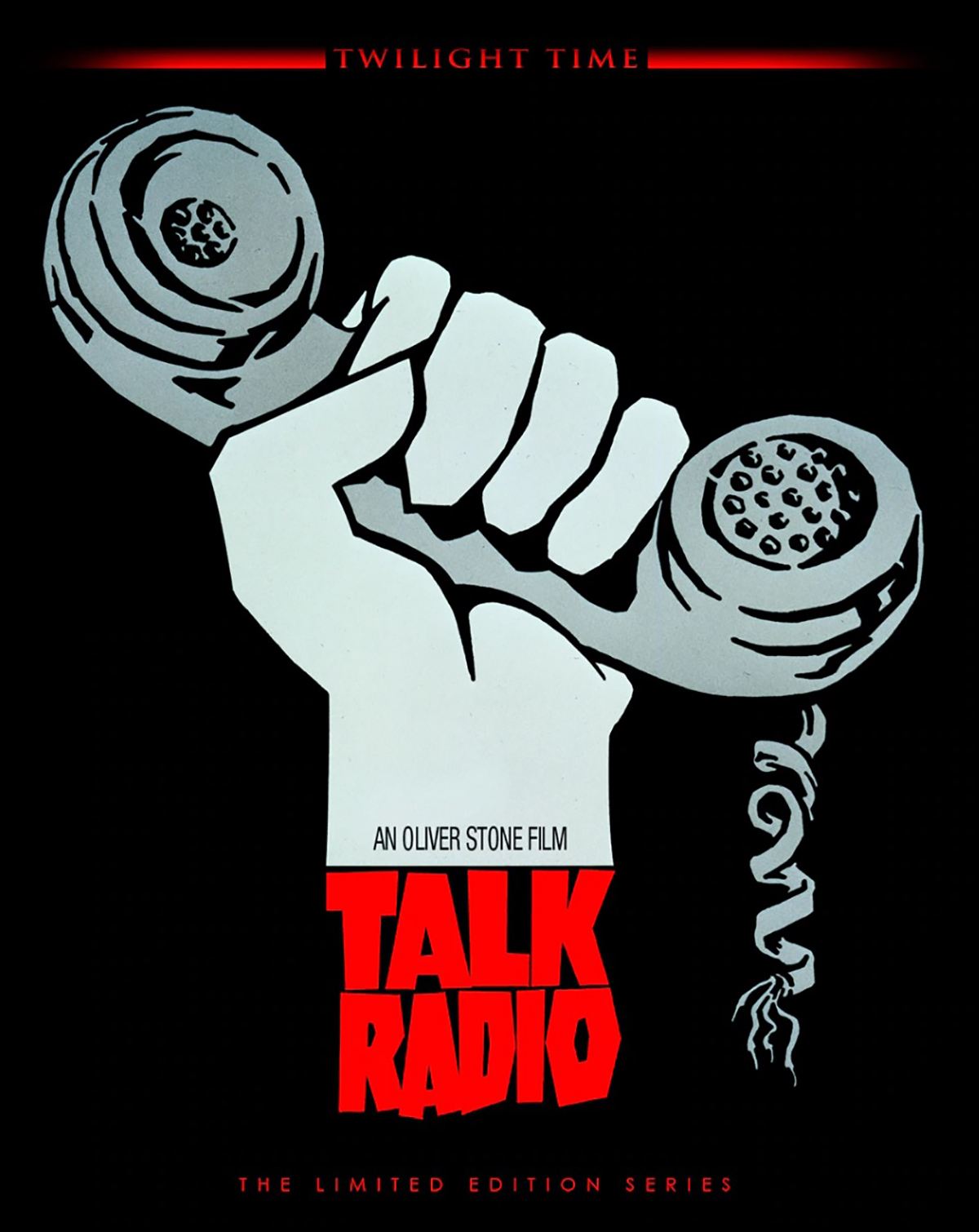 Oliver Stone’s 1988 film Talk Radio now feels eerily prescient as well as quaint. Based on Eric Bogosian’s Pulitzer Prize-nominated one-man play of the same name, as well as Stephen Singular’s book Talked to Death: The Life and Murder of Alan Berg, the film explores how shock jocks stoke and gratify an obsessive audience’s bitterness, in the name of “truth-telling” that’s really geared toward making money and expanding their personal mythologies. In the film, as in the 1987 play, Barry Champlain (Bogosian) is a Jewish radio personality in Dallas who spends most of his airtime violently arguing with white supremacists. While Barry will occasionally parody left-wing platitudes, such as castigating a caller for his thoughtless use of the term “third world,” he’s unmistakably more or less a liberal intellectual, though with a roiling hostility that’s more reminiscent of conservative blowhards like Rush Limbaugh.

This union of personality traits—yielding a liberal who refuses to parrot humanist platitudes, instead indulging his killer instinct—gives the film, like the play, its pulse. Perhaps this element of the material is more relevant now than it was in the late ’80s. In an age in which “we go high, they go low” seems pitifully unsuited to combating America’s soul-sickness, with Democrats who would apparently rather look virtuous than exert actual influence, the idea of a liberal wolf willing to fight fire with rhetorical fire has cathartic logic. (The ideal might be a less reactionary Bill Maher, which is probably an oxymoron.) For instance, Barry doesn’t bother “reasoning” with a caller who insists that Jews are part of a global Zionist conspiracy, because he understands that the man is calling to air his hatred and have it greeted in kind.

Bogosian doesn’t entirely see Barry as a hero, but as a masochistic drug addict. Barry goes toe-to-toe with bigots on his show and makes fools of them. But to what end? His callers are still fools, while Barry is left simmering in a volcanic rage that’s becoming harder to shrug off. This anger is Barry’s drug, which allows him to feel relevant and alive by plumbing the recesses of his frustrations with his culture and his self-hatred. None of Barry’s other vices—booze, smokes, women—arouse him the way his talk show does, but this high erodes his ability to foster rudimentary human connections. Talk Radio is thorny because it invites us to share in the agency of a quasi-liberal avenger who harvests the narcotic power of hatred, which is more visceral than reason could ever be—a lesson that history’s strongmen accept as a given.

Stone, a progressive who fetishizes power—who’s informed serial killers, capitalists, Richard Nixon, and Vladmir Putin with sexualized gravity in his work—is almost too good of a fit for the ironies that drive Talk Radio. The film arrived in between Wall Street and Born on the Fourth of July, and while Talk Radio is leaner and more concentrated than those films, it’s still rich in Stone’s bombast. And one wonders if this material would’ve benefitted from the calm lucidity that, say, director James Foley later lent to his adaptation of David Mamet’s equally embittered Glengarry Glen Ross. But some of Stone’s flourishes do benefit the text. Working with Bogosian on the screenplay, Stone expands the material beyond the radio station and adds peripheral characters like Barry’s ex-wife, Ellen (Ellen Greene). A potentially clichéd signifier of Barry’s alienation, Ellen is redeemed by Greene, who’s so expressively vulnerable in the role that she threatens to stop Talk Radio in its tracks. Greene offers a valuable counterpoint that wasn’t present in Bogosian’s play: As Barry’s most prominent and unjust victim, she affirms the ugly truth of Barry’s indulgent posturing.

But Stone, on the cusp of entering his über-maximalist phase, also pumps Talk Radio up with camera gymnastics, as he’s clearly afraid of mounting a “stagey” film adaptation. Robert Richardson’s hot, prismatic, and scarily silky cinematography supplies the film with enough visual texture, without Stone’s insistence that the camera also be nearly up Barry’s nose, or circling the studio, or snaking through the halls, or fashioning endless multi-planed juxtapositions of Barry and his shocked staff. These devices are impressive but pummeling, suggesting the horror-film equivalent of laugh lines, flattening the power of Barry’s rants, particularly as he becomes unhinged in the third act.

However, the scariest aspect of Talk Radio is just how mild Barry now seems, which, retrospectively, gives Stone’s florid stylistics a quality of over-compensation. Barry’s hateful radio show, which Bogosian and Stone ultimately rue as a sign of an eroding culture, is almost cute compared to what one can read and hear today on Reddit, far-right websites, and that propagandistic agency of the right-wing state known as Fox News. Watching Stone’s film, one contemplates shock jocks as a kind of ideological explorer, who mapped out territory that has come to crowd out more rational neighboring lands. In 2019, hate politics are so mainstream that Barry might not be inflammatory enough to get killed, which Stone and Bogosian recognize to be the highest compliment of this field.

At times, this image on Twilight Time’s Blu-ray seems a little soft, but that may be reflective of the source material, and said softness is generally appealing anyway, with a healthy amount of grit that gives the film a rough, shaggy edginess. Colors are vibrant, especially the whites and blues which illuminate the hypnotic radio station that serves as the narrative’s central setting. Blacks are a little inky, but this also contributes to the film’s hallucinatory atmosphere. There’s nothing ambiguous about the intentions of the 5.1 DTS-HD Master Audio surround track, however, as it brings to vivid life the symphony of subtle diegetic sounds that animate the radio station, from the flipping of switches to the lighting of cigarettes to the rat-a-tat pacing of characters as they grow agitated with the protagonist’s shtick.

In an excellent new interview, Oliver Stone discusses the making of Talk Radio, particularly in terms of how it prepared him to shoot the epic Born on the Fourth of July. Stone talks passionately of experimenting with the film’s camera tricks, particularly in terms of evoking a claustrophobic atmosphere. Stone clearly—and correctly—sees Talk Radio as a well-made technical exercise, and he admits to having some distance from Eric Bogosian’s character. After Talk Radio’s financial failure, which came right after Wall Street’s mixed reviews and so-so box office (it wasn’t yet a legendary film), Stone was in a funk while shooting the difficult hospital sequences of Born on the Fourth of July. Stone is still a terrific storyteller, and he brings to life a pivotal transitory moment in his artistic career. The package is rounded out by the theatrical trailer and a booklet featuring a perceptive essay by critic Julie Kirgo.

Emphasizing its beautiful imperfections, Twilight Time restores Talk Radio without compromising its sleazy and earnest vitality. The film has never seemed this alive.

Interview with the Vampire Review: A New Lease on Eternal Life