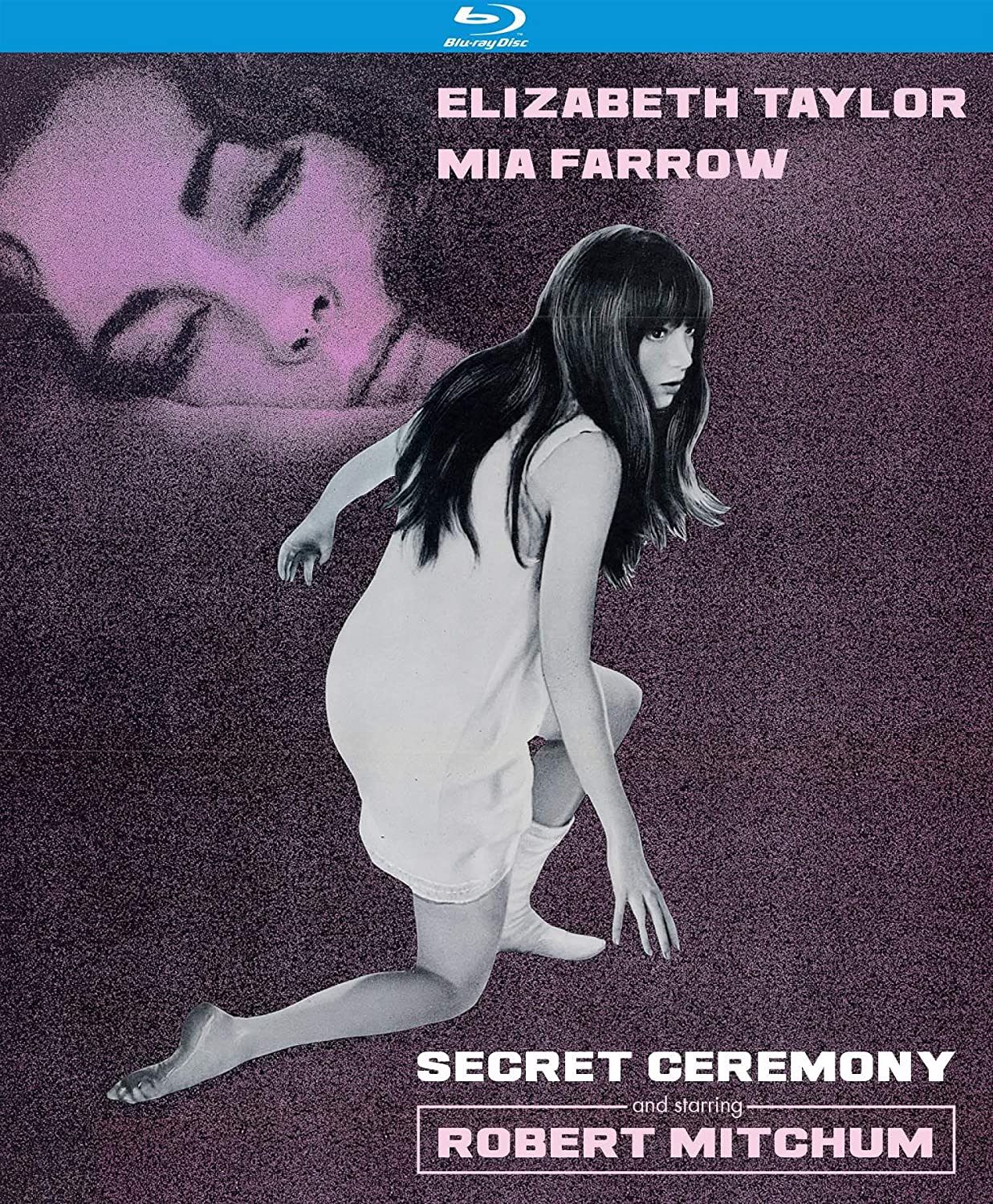 Existential crises and shifting power dynamics abound in Joseph Losey’s cinema—signature fixations that he pushed to deliriously campy and absurd heights in his 1968 curio Secret Ceremony. A perverse game of psychological manipulation is kicked into motion when the infantile and extremely distraught Cenci (Mia Farrow) follows Leonora (Elizabeth Taylor), an aging prostitute, from a bus to the cemetery where the older woman stops to mourn her daughter, who drowned five years earlier. By the end of this bravura 15-minute opening sequence, which plays out with virtually no dialogue and whose mood swings uneasily between comedy and tragedy, Leonora and Cenci become connected. And when Leonora hesitantly agrees to go back to Cenci’s enormous English manor, she learns that the strange, neurotic girl lives alone and is herself mourning the devastating loss of an immediate family member: her mother, who happens to be a spitting image of Leonora.

After downing the enormous breakfast Cenci prepares for her, Leonora lets out a satisfied belch before hopping into the bathtub with her newfound surrogate daughter, and the two embark on a dangerous, twisted game, attempting to fill the voids left behind by their individual losses. As in Losey’s earlier The Servant, a stately mansion proves a fitting setting for his densely baroque atmospherics. It’s a place that feels both out of time and tied inextricably to late-‘60s mod London. Akin to a decaying haunted house, it’s rife with the sounds of old music boxes and contains everything from an out-of-tune piano to the luxurious clothing once worn by Cenci’s dead mother. An aura of desperation, grief, and anguish pervades the mansion, as suggested by the disjointed fragments that hint at the sexual abuse Cenci experienced at the hands of her lascivious stepfather, Albert (Robert Mitchum).

Despite the tragedy that underlies Cenci and Leonora’s committed playacting, the manner in which they dive headfirst into their mother-daughter roles lightens the mood in the film’s first half, and their hijinks exhibit a jovial mischievousness and playfulness that one might expect from a silent comedy or farce. And the scenes depicting Cenci’s two kleptomaniac aunts, Hannah (Peggy Ashcroft) and Hilda (Pamela Brown), skulking around the house, grifting for any valuables left lying around, are also initially played purely for laughs.

The outrageousness of the aunts’ callousness is amusing in the moment, until the true damage of their greedy scheming and general apathy toward Cenci is exposed by Leonora, who calls the women out for leaving their mentally ill niece alone and unprotected from the whims of Albert, who eventually arrives on the scene to once again molest his helpless stepdaughter. It’s at this point that Leonora, as despondent as she is, realizes that Cenci needs her more than she needs a surrogate daughter, but the demands of upholding her and Cenci’s collective fantasy begin to grow too large for either of them to continue to meet.

Losey’s protagonists often walk the precarious line between madness and sanity, but in Secret Ceremony, it’s only the tacitly agreed upon, and consistently precarious, simulation of normalcy that prevents Cenci and Leonora from plunging into an abyss of despair. Through its elliptical editing and disorienting balancing of burlesque and emotionally tumultuous melodrama, the film constructs a twisted world of codependent delusion, through which two lost souls navigate half-blind. And while Losey conveys the abundant joy that comes from even a temporary reprieve from such suffering, he infuses Cenci and Leonora’s game of role-playing with a discomfiting melancholy. As the illusion inevitably dissolves, Losey reveals not only the great depths of both women’s pain, but the outrageous and irrational acts that human beings will resort to when forced to squarely confront the cruel indifference of the universe.

Shot primarily in the incredibly unique Debenham House in London, Secret Ceremony provides an architectural feast for the eyes that’s significantly enhanced by Kino Lorber’s beautiful HD transfer. The range of colors is wide and vibrant throughout, from the gold mosaics to the aqua-blue-tiled walls to the bright greens, purples, and blues that frequently mark Elizabeth Taylor and Mia Farrow’s ostentatious costumes. One doesn’t typically expect colors to pop this much with anything short of a 2K transfer, so the expressiveness and intensity of the image here is a welcome surprise. As for the audio, the dialogue is suitably clean and the film’s unsettling sound design is well-preserved in the nicely layered mix.

While film historian Tim Lucas occasionally comes off as overly rehearsed on the commentary track included on this disc, he does a wonderful job of weaving together analysis of Secret Ceremony’s aesthetic qualities with discussion about the film’s production and the careers of director Joseph Losey and the three main actors. He also devotes ample time to the film’s source material, a 1960 novella by Argentine writer Marco Denevi, and the elements that Losey and screenwriter George Tabori kept and the ones they concocted. Lucas’s analysis is varied and well-rounded, offering a strong case for why this often overlooked film stands shoulder to shoulder with Losey’s more celebrated work.

Joseph Losey’s utterly bonkers Secret Ceremony is one of the missing links between mid-‘60s Euro-arthouse identity mindfucks and their British and American counterparts in the early ‘70s, such as Nicolas Roeg’s Performance and Robert Altman’s Images. The film now burns bright like a lucid fever dream thanks to Kino Lorber’s new Blu-ray.