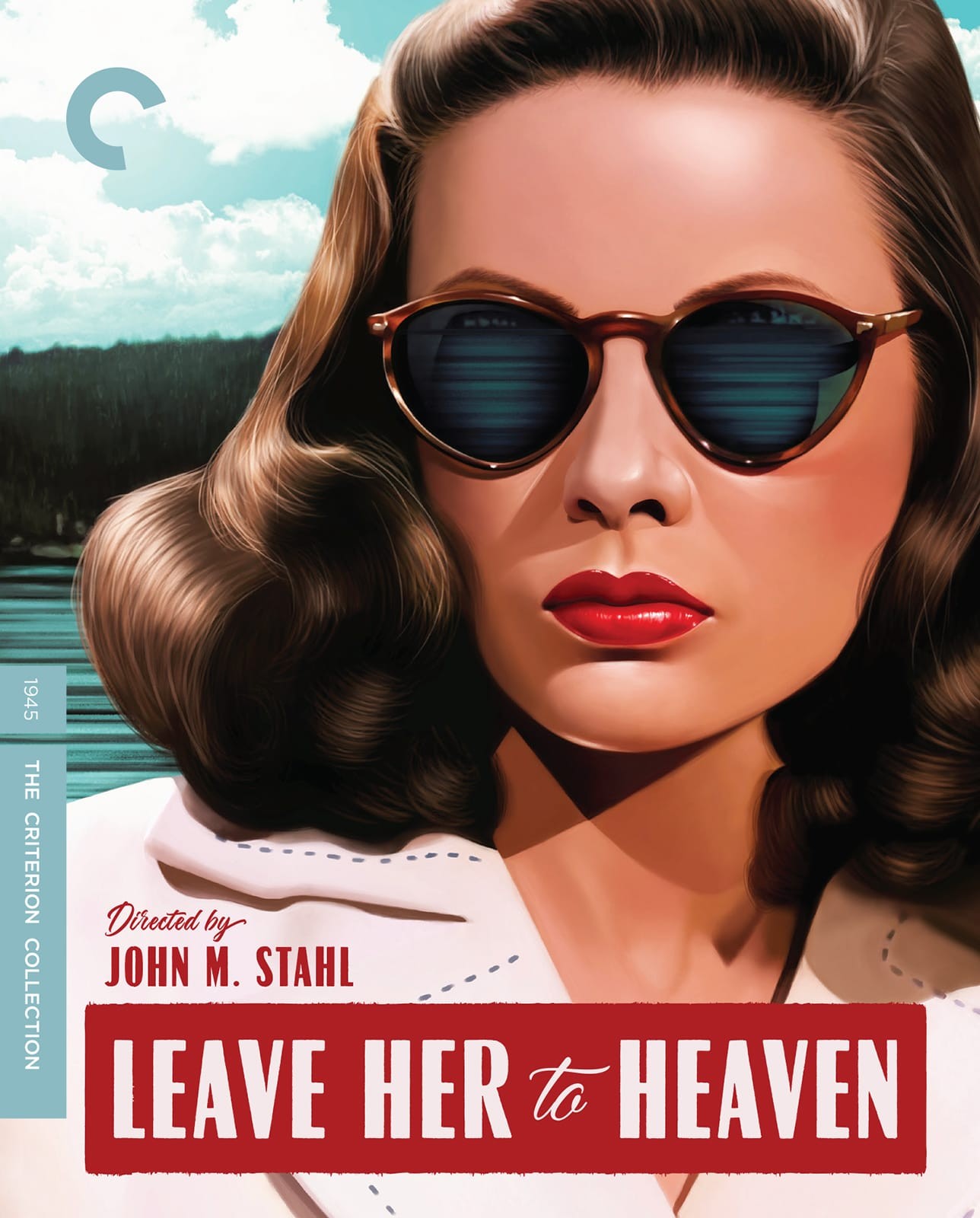 Led by their collective nose for revisionism, modern audiences are so quick to enumerate all of Leave Her to Heaven’s noir bona fides that they don’t recognize the crucial ways in which John M. Stahl’s classic fails the litmus test. It’s a characteristic that arguably helps it to sustain its fresh, vital, and tricky place within the film canon.

Leave Her to Heaven earned Gene Tierney her only Oscar nomination playing Ellen Berent, the femme fatale at the center of Ben Ames Williams’s bestselling novel of the same name. As told in fatalistic flashback, she meets author Richard Harland (Cornel Wilde) on a train. He notes that she’s reading one of his books, and though she doesn’t make the connection, Ellen fixates her radiant azul eyes on him with enough hypnotic fervor to suggest she’s second cousin to Simone Simon’s Irena from Cat People. The claws instantly planted, Richard follows Ellen out to her family’s estate, witnesses her performing a herculean funeral ceremony, throwing her dead father’s ashes from horseback, shares with her a plate of the most delicious white-bread turkey sandwiches he’s ever tasted, and stands to her flank as she jilts her fiancé, aspiring district attorney Russell Quinton (Vincent Price), and almost improvisationally declares she intends to tie the knot with Richard. All within the space of two, maybe three days.

The velocity with which Ellen imposes herself on Richard, and his acquiescence to their arrangement, wouldn’t make sense if Stahl had shot the film in monochrome through venetian blinds except as a reductio ad absurdum of noir fatalism. But working under the close personal supervision of 20th Century Fox mogul Darryl F. Zanuck, Stahl was happily obliged to present the material with the florid accent marks of classic Hollywood melodrama, couching Ellen’s domestic storm front within composer Alfred Newman’s swooping score and cinematographer Leon Shamroy’s densely saturated Technicolor vistas, removing all the warning signals that would be foregrounded for our poor doomed hero in any self-respecting B movie, the first of which ought to have been Ellen laying her meat-hook eyes on him on that train.

Undisturbed by her blithe dismissal of Russell, Richard accepts his situation as though it were emerging from one of his (apparently quite rococo) novels. At their first meeting, he uses a line from his book to pick her up, comparing her to the hedonistic miasma of patchouli. Later on, he nicknames her after the fragrance. Hardly Walter Neff fixating on Phyllis Dietrichson’s anklet in Double Indemnity, but then again, did Phyllis or any other noir diva ever commit an act of calculated evil as shocking as Ellen allowing Richard’s polio-stricken kid brother, Danny (Darryl Hickman), to drown in a lake so that her husband would have more time for her?

Is Leave Her to Heaven one of those, as per Bob Ross, happy little accidents? A film that lucked onto the trappings of noir without forcing its audience to savor the taste of metal on the back of their tongues? (It was monster hit, second only to The Bells of St. Mary’s that year, the two somehow seeming to balance out each other.) Certainly the further Tierney’s freakishly possessive Ellen goes down her own private wormhole of jealousy, and the more Richard ineffectually allows himself to be steamrolled by her matrimonial battle plan, the more the film seems to align itself with the distaff-distressed worldview of classic noir.

But despite Ellen’s impressive and variety-filled catalogue of spicy atrocities committed against Richard and his kin, there’s one crucial difference between her and the archetypal femme fatale: Everything she does, she does out of pathological love for him. Ellen isn’t interested in worming her way into her weak-willed intended’s heart in order to destroy him. Domestic to a psychotic fault, she sets her sights on destroying everything that would keep him away from her, positioning Leave Her to Heaven as a noir outlier, a sick-joke inversion that riffs off the creeping disengagement men invariably feel when forced into monogamy. Good luck with that happy ending behind the moon, Mr. Author.

John M. Stahl’s Leave Her to Heaven is typically cited as both a seminal moment, and peak, of the genre offshoot “sunshine noir,” though that classification doesn’t really tell the whole story about Leon Shamroy’s Oscar-winning color cinematography. Across the ornate density of the film’s production design, or the sin-poisoned natural backdrops that bear silent witness to diseased possessiveness and murderous intent, or the crack squad of the most compelling faces the American cinema could offer in 1945, Shamroy’s lighting can’t be reduced to the anodyne meanings imparted by “sunshine,” partnered with “noir” or otherwise. Owing to the subtle intelligence of Stahl’s direction, the scene-by-scene lighting in Leave Her to Heaven obeys a spinning wheel of circumstances and feelings, above all other considerations.

Criterion’s Blu-ray release of this poison-pill classic maintains a balance and precision that might, even after being a cornerstone in the home-video market for more than 35 years, rank among their true bullseyes in reproducing a specific evolutionary stage in Hollywood color photography—paying as much respect to the breadth of the era’s capabilities as the limits of the same. One marvels that one image could unite the most facially unlike Genes (Tierney and Lockhart) in a single frame, while nailing such a precisely 1945-specific 20th Century Fox pallidness in the cream-soda dressing gown that enshrouds our diabolical beauty queen, the doctor’s algae-gray suit and vest combo, or the cobalt blue lampshade that hovers over them both. In short, a royal command performance of Leave Her to Heaven could scarcely compel a greater alertness to the wonderments, and technological ceilings, possible in this singular, now never to be seen again, lightning strike of glamor worship, melodramatic storytelling, abnormal psychology, and irreducible, airport-paperback frisson. In even shorter short, only the highest marks are good enough for Criterion’s image team.

Not to be outdone, the disc’s soundtrack bears no apparent flaws, impeccably balancing Alfred Newman’s complex dramatic score, the cornucopia of sounds effects (including a mighty gale), not to mention the wide spectrum of voice timbres, hardly less evident than in scenes between Gene Tierney’s commanding baritone and Jeanne Crain’s slightly higher notes.

Imogen Sara Smith’s video essay on the film—and director Stahl—amounts to as much as one could ask for the format: diligent, brilliantly researched, fascinated, and so on. It’s unimpeachable, to put one fine point on it. One cannot fail to notice, however, that the Criterion Collection’s particular tendencies toward canon-building, even after so many decades of challenges to establishment complacency, place Stahl at some disadvantage to the more categorically reclaimed Douglas Sirk; for example, Stahl’s 1935 Magnificent Obsession serves only as a supplement, not an artwork of equal stature, on Criterion’s release of the 1954 Sirk remake. This gap might take some work to close, and, had the supplements package on Leave Her to Heaven included more than just one, solitary video essay, however expert, a lot of that work might not have gone wanting. Smith’s contribution is enjoyable, educational, and, if one already regards Stahl with at least half the respect he’s due, imparts that special feeling of meeting a fellow traveler for the first time. But a proper reassessment of Stahl’s role in the American cinema requires much greater support than Criterion provides here.

Picture and sound pass with flying colors, but this release doesn’t put enough effort into nudging an understanding of American cinema Stahl-ward.