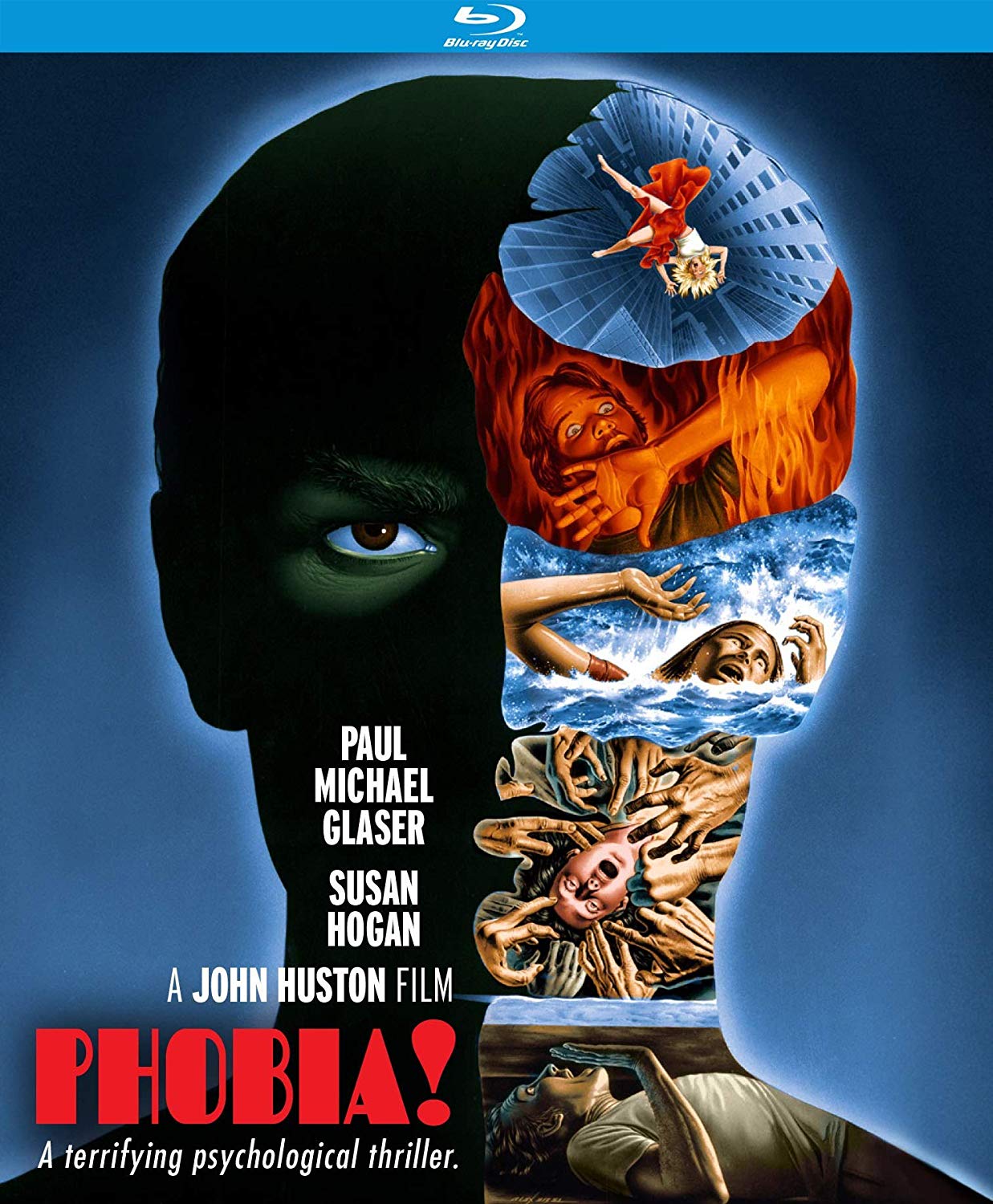 John Huston was nothing if not mercurial, and his directorial body of work, which began with Humphrey Bogart’s first star turn for Warner Bros., The Maltese Falcon, and ended with an adaptation of James Joyce’s The Dead, is too expansive to be boiled down to just a few themes. He was drawn to canonical texts and stories of ill-fated quests and the self-destructive outer limits of human behavior, but he refused to play things safe, taking on strange studio assignments, cutting his teeth on previously untried genres, most notoriously with Annie in 1982, or straining to salvage shoddily conceived material.

Phobia falls into both camps. This psychological thriller concerns an extreme variant on exposure therapy as practiced by Dr. Peter Ross (Paul Michael Glaser), whose subjects are convict volunteers each with a singular, overriding phobia: snakes, heights, tight spaces, and so on. Dr. Ross’s treatment raises some eyebrows in the medical community—each of his patients is subjected to multi-screen audio/visual representations of his or her respective phobia—but the controversy really spikes when the test subjects come to be consecutively killed off by an unknown assailant, each grisly murder directly corresponding to the victim’s deepest fear.

The nebulous murder mystery that emerges never quite takes hold of the viewer. The entire cast of characters functions as a virtual lineup of potential suspects—Dr. Ross, his current love interest (Susan Hogan), his former one (Patricia Collins), and an abrasive police inspector (John Colicos)—resulting in a film with no clear protagonist. Dr. Ross should conceivably occupy this role, but Glaser plays him as all dispassionate professionalism with only a few supplemental character traits: a reputation as a ladies’ man and a fondness for hockey (presumably to signal the film’s status as a Canadian production). The childhood tragedy that’s apparently informed his radical therapeutic methods is given only perfunctory attention.

So much of John Huston’s finest work—from The Treasure of the Sierra Madre and The African Queen to Fat City and Wise Blood—is marked by its distinctiveness of place, and an authentic and palpable one at that. But that quality is nowhere to be found in Phobia, whose drab interior scenes within a sketchily conceived psych clinic are interspersed with stock-looking exterior footage (shot in Toronto, Los Angeles, and Atlanta) that merely serves as backdrops for obligatory car chases and other action set pieces. In spite of some occasional glimmers of artistic brio on Huston’s part, spatial arbitrariness reigns supreme.

Ultimately, Phobia never quite deviates from a mode of meandering ambiguity, a kind of scratchboard whodunnit with no compelling stakes. Huston eschews horror-thriller spectacle with the exception of the opening shot, a striking bit of optical disorientation designed to simulate claustrophobia. The primary focus, as in Huston’s classic work, is on the characters, their fraught interactions, and the tension that emerges therefrom. But these characters are one-dimensional byproducts of an uninspired script that clearly passed through too many hands. Where the prior year’s Wise Blood harnessed every stray jot of gnarled, eccentric energy to be found in Flannery O’Connor’s original novel, Phobia runs on hackwork split five ways.

Phobia’s reputation as a film maudit is occasionally attributed to Huston’s old age, but while the filmmaker was certainly in rough shape, having been diagnosed with emphysema only two years earlier, his talent as a filmmaker was clearly undiminished; after all, Under the Volcano, Prizzi’s Honor, and The Dead were all still on the horizon. Hindsight clarifies the film as a mere anomaly, the result of a great director on temporary hiatus from his late-career passion projects, eager to flex his muscles as a hired gun on brazenly tawdry material. If Phobia isn’t particularly good, it’s at the very least a cinephilic curio for the ages.

Perhaps needless to say, the 4K restoration of Phobia is a quantum leap over the previous VHS transfer, which smeared so many of the film’s soft-lit interiors into fuzzy incomprehensibility. The new image is crisp, with healthy grain distribution and only fleeting contrast imbalances. The DTS-HD audio does justice to the film’s barebones soundtrack, though some ambient details seem played down in the mix, especially in the outdoor scenes. André Gagnon’s overwrought score, however, comes through loud and clear.

A new audio commentary track features writer Paul Corupe and historian Jason Pichonsky trying and only occasionally succeeding to thematically situate Phobia within John Huston’s larger filmography. More interesting is the novel information regarding the development of the screenplay and historical background on the Canadian film industry’s tax-shelter era. Interviews with actresses Susan Hogan and Lisa Langlois prove more enthusiastic, packed to the brim with fond reminiscences of their experience working with Huston.

Kino makes the most of John Huston’s disappointing late-career psychological thriller with a new 4K transfer and a series of reverent extras.

Review: Thorold Dickinson’s The Queen of Spades on Kino Blu-ray