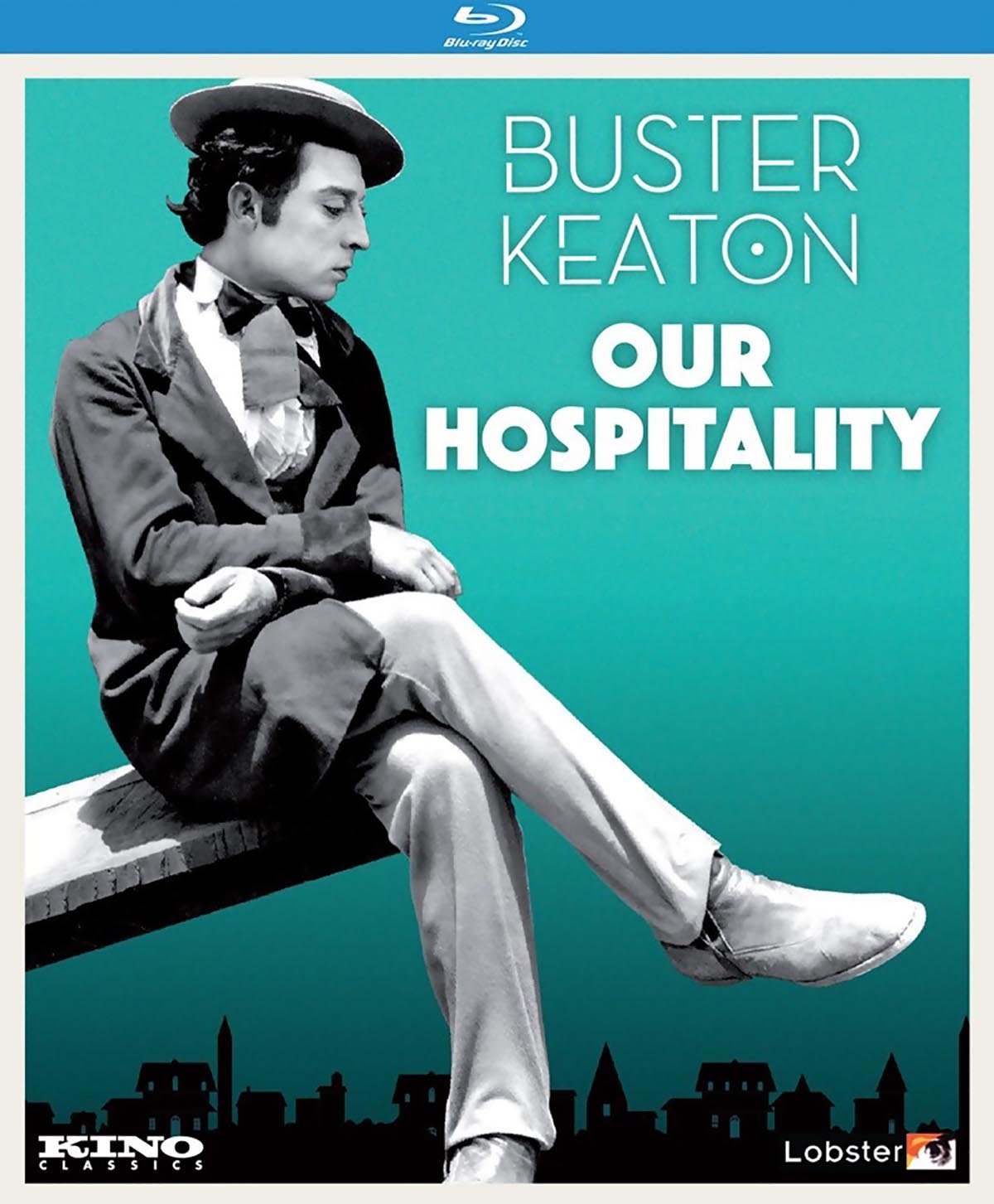 Buster Keaton’s Our Hospitality, his first self-produced showcase anchored to a feature-length plot, is grounded in the mythology of 19th-century family feuds, with the star’s naïve Willie McKay stalked by the vengeful Canfield clan (read as the Hatfields and the McCoys) upon his return to his birthplace beyond the Blue Ridge Mountains. Indeed, Our Hospitality’s six-minute prologue, in which the infant hero’s father is killed in a shootout with his enemies, is straight melodrama from the template of D.W. Griffith. Flashing forward 20 years to young Willie, raised in a dustily bucolic New York City, taking the journey home to reclaim his parents’ “estate,” Keaton centers a quarter-hour of the film on a charmingly recreated steam engine’s Southwestern journey, featuring such absurdist gags as tracks that can be easily lifted off a trapped mule’s hoof, close carriage quarters that force Buster to ditch a top hat for his familiar porkpie, and a canny passerby who throws rocks at the train’s surly engineer (played by Keaton’s father Joe) to reap the reward of free firewood chucked at him in response.

But the foundation of the hill-country warfare gives the comedy extra weight when Keaton’s sheltered youth disembarks to find the family estate is a collapsing shack, and his neighbors are blood rivals with guns drawn in hot pursuit, with the added complication that the maiden he fell hard for on the train journey (Buster’s wife Natalie Talmadge) is a Canfield. Also lacing the film’s middle act with his graceful brand of slapstick and his character’s sober resourcefulness, Keaton eludes the misfiring pistols of the Canfield patriarch (Joe Roberts) and his sons long enough to accept a dinner invitation from his sweetheart, where rules of hospitality preserve his life and compel him to linger, long after exchanging one-eyed stares with his adversaries during prayer at the supper table. When the chase inevitably resumes, it accelerates into a tour de force, labors-of-Hercules climax, again with echoes of Griffith, as Buster dangles from cliffs, falls to a riverbed, and struggles in whitewater rapids before a heroic capper of a stunt that still exhilarates almost 100 years after it was conceived.

Co-directed by Keaton and John G. Blystone, Our Hospitality is not fully possessed of the surreal, dreamlike qualities that came to mark the best of Keaton’s subsequent features. As a filmmaker, he was still finding the balance between the gag-driven energy of his comedy shorts and the plotting demands of a seven- or eight-reel narrative. But it’s the first major work of his peak era, when a stone-faced young ex-vaudevillian became American film comedy’s first action hero with a singular, finely honed physical poetry that was made for the movies.

As all of Our Hospitality’s original camera negatives have been lost, Kino had to source its transfer from Lobster Films’s 2K restoration, which used a 35mm duplicate negative from AMPAS and a separate diacetate print from the original negative, housed at MoMA. Although there’s still a good deal of flickering, some occasional jittering at the edges of the frame, and slight signs of damage, nearly all signs of debris have been cleaned up, and the tinting of the image, as Buster Keaton originally wanted, is consistent throughout. Overall, the picture is on the soft side, and contrast isn’t exactly great. But, as mentioned in the disc’s commentary track, this is at least in part due to the purposeful haziness of the cinematography, used to obscure some of the film’s potentially more noticeable mattes and backdrops. Robert Israel’s newly recorded score, on the other hand, is crystal clear and quite robustly mixed.

Film historians Farran Smith Nehme and Imogen Sara Smith provide a delightful new audio commentary, throughout which their love for Keaton, and Our Hospitality in particular, is readily apparent. They touch on everything from the film’s roots in the real-life family feud between the Hatfields and the McCoys to its amusing, almost kitschy, era-specific details, such as the ridiculous bike (“gentleman’s hobby horse”) upon which Keaton is introduced and the very primitive train, which is used for some of the most enduring comedic moments. Their time is filled out with plenty of astute breakdowns of various gags and an in-depth discussion of Keaton’s working methods, specifically as he started moving into feature-length comedies.

The 25-minute “Scoring for Buster” offers an interesting peek into the silent-film scoring process, with Israel chronicling the extensive efforts that go into researching music from the exact era and region in which a film is set. The disc also comes with two relatively forgettable short films: Fatty Arbuckle and Grover Jones’s 1925 comedy The Iron Mule, included only because it makes use of the same train (and steals several gags) from Our Hospitality, and Pierre Blondy’s Keaton-starring Un Duel à Mort from 1947. The package is rounded out by a brief introduction by film preservationist Serge Bromberg and booklet essay by film historian Jeffrey Vance, who delves into Our Hospitality’s production history and troubles, including Keaton’s near-drowning during the shooting of the film’s famous river sequence.