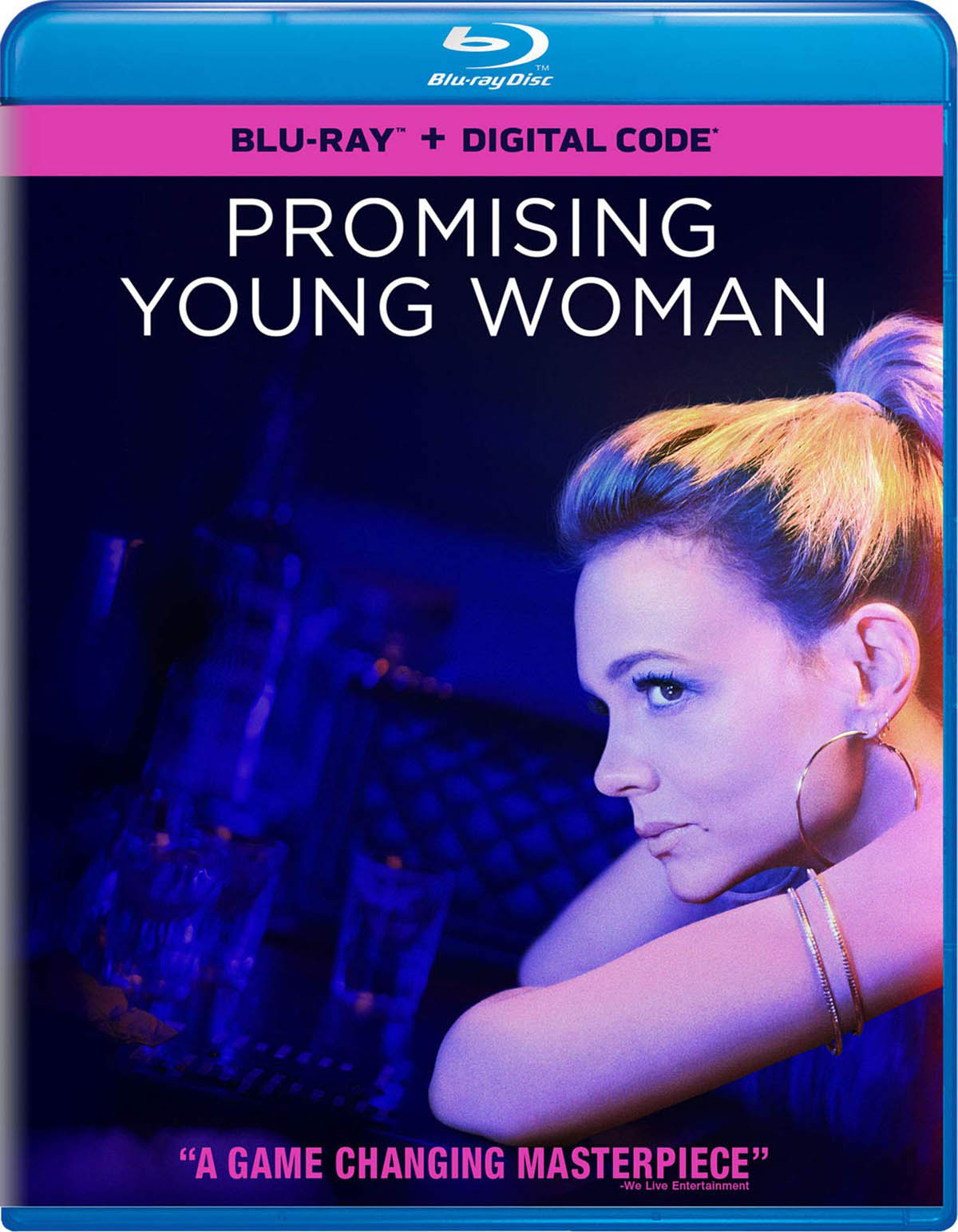 Writer-director Emerald Fennell’s Promising Young Woman is a scorched-earth polemic that not only subverts expectations of the rape-revenge genre it loosely fits into, but also spits these expectations back in the viewer’s face. Our need for characters to be divided neatly and predictably into camps of the virtuous and the corrupt repeatedly falls victim to Fennell’s excoriation of rape culture and the institutions that prop it up. Like its distinctive soundtrack of electronic, folk, and punk-pop anthems, the film is often confrontational and inviting at once, its empowerment fantasy of a woman who steamrolls male egos as stylish and fun as its portrait of gender relations is dire.

Promising Young Woman opens with a group of white-collar bros (Adam Brody, Ray Nicholson, and Sam Richardson) at a club ogling Cassie (Carey Mulligan), a striking thirtysomething blonde in disheveled business attire who’s sitting by herself, apparently too drunk to even call herself an Uber. Brody channels the nice-guy vibes that he exuded on The OC as his character slides in next her, playing the part of the charitable and comparatively sober good Samaritan. Back at his place, Cassie suddenly snaps out of her stupor just as he’s about to rape her, immediately cutting the would-be assaulter down to size simply by being conscious and able to return his gaze. Fennell cuts directly from this confrontation to Cassie’s triumphant strut back home—outwardly, an early-morning “walk of shame”—leaving open for conjecture what else, if anything beyond ego-battery, that Cassie might have done to the man.

Cassie and, by extension, Promising Young Woman rely on the thesis that such men can be rendered impotent (in multiple senses of that word) merely by the forced recognition that there actually is someone behind the half-closed eyes of their victims. She goes out regularly and catches a different man in the same scenario, logging her activities in a notebook like conquests. With the presumption that all these men could be tamed so easily, the film’s plot provides itself with a suspiciously convenient safety hatch for getting Cassie out of each and every situation. But this also allows Fennell to concoct some carefully orchestrated humor around Cassie’s obsessive missions, rather than eliciting the pure horror that might otherwise be the audience’s instinctive reaction to Cassie’s dangerous game.

Fennell’s deemphasizing of suspense throughout the film in favor of humor provides for some cringe-inducing critiques of the straight male psyche, as the men Cassie hoodwinks are prone to prattling on about their extremely interesting, nuanced cultural tastes—and to a woman they believe can’t even respond to them. Christopher Mintz-Plasse plays Neil, a later victim of Cassie’s scheme, who effusively praises Consider the Lobster as he forces a drink into the hands of an already-inebriated woman. Unmissable in the background as he pontificates is a poster for Panique, Julien Duvivier’s 1946 noir about an easily manipulated woman, credibly pegging Neil’s high-culture fetishism as deeply tied to his misogyny.

If men who watch Promising Young Woman see themselves in some of its many dirtbags, that’s no doubt intentional. Fennnell’s casting indicates that among her targets are pop culture’s masculine ego-ideals, as the men Cassie catches mid-assault are all iconic purveyors of essentially innocent, playful masculinity. Brody’s primetime-soap good-kid persona is the first up for deconstruction, followed by the male-privilege-as-juvenile-fun image that Mintz-Plasse embodied as Superbad’s “McLovin.” It should be no surprise when a pair of supremely likable TV stars, New Girl’s Max Greenfield and Glow’s Chris Lowell, appear late in Promising Young Woman as deeply toxic men with ties to Cassie’s traumatic past.

We get that backstory, concerning a traumatic event during Cassie’s brief tenure in medical school, in pieces, as people from her old class begin to pop back up in her life. Most, like Madison (Alison Brie), are sought out by Cassie as part of her grand revenge scheme—the final score to settle. Former classmate Ryan (Bo Burnham), on the other hand, doesn’t figure into her plans when he wanders into the café where she works. An awkward reunion is initiated when Ryan inadvertently insults her post-med-school career, then charmingly endeavors to make up for the slight. He seems like a genuine exception to Cassie’s implicit belief that all men are trash, and it’s at this point that Promising Young Woman takes on the feel of a rom-com. This second act sticks out in the structure of the film, but that’s by design. Pressing pause on Cassie’s retributive endeavors, this section features a charmingly impromptu sing-along to, of all the forgotten bubblegum-pop songs that millennials might conceivably bond over, Paris Hilton’s “Stars Are Blind.” Which should, perhaps, be read as foreshadowing developments between Cassie and Ryan, because on that single Hilton simply sounds too good to be true.

If the banter between Ryan and Cassie suggests that Fennell might excel at screwball comedy, the scenes in which our hero surveils and traps her quarry attest to the filmmaker’s flair for crafting savvy, gore-free postmodern horror. Fennell’s stylish and acerbic writing and direction bring harmony to the film, though her tonal shifts can still make it feel a bit unwieldy at times. Of course, that’s all to apt, as this a story about a woman who carries an unwieldy burden. Bitter but not entirely hopeless, angry but certainly not humorless, Promising Young Woman puts its only remaining shreds of faith in a woman willing to do, if not exactly the right thing, then whatever comes closest to it in a pretty, ugly world.

Promising Young Woman’s 1080p transfer is sturdy on the level of detail, boasting fine clarity across the entirety of the frame in both interior and exterior scenes. Skin tones are stellar and the film’s just-shy-of-opulent color palette is impressively controlled. Alas, the presentation falters during a few scenes, especially low-lit ones, where noise is considerably apparent, though a case could be made that in at least a few of those instances—such as Cassie’s walk of victory following her night with Adam Brody’s character—the gnarliness of the image is in lockstep with the film’s themes. As for the film’s DTS-HD Master Audio 7.1 lossless soundtrack, it’s dynamic and immersive through and through. The film’s use of pop songs is richly enveloping, while the dialogue is well-positioned and consistently clear throughout.

Skip right past the short featurettes included here (“A Promising Vision,” “Two-Sided Transformation,” and “Balancing Act”), as they’ve all been lazily cobbled together from EPK footage and find the cast and crew dishing canned insights on the film’s making and themes, and head straight for writer-director Emerald Fennell’s commentary track. As the newly minded Oscar nominee recorded the track in November, prior to Promising Young Woman’s theatrical release and it spawning many a think piece, you may inevitably feel as if she’s selling some of the thornier aspects of her film short. But it’s never less than clear throughout the track what exactly she wanted to push against with Promising Young Woman, and in the case of that audacious and contentious ending, that meant turning the trope of the violence-seeking final girl from so many horror films on its head, if not rejecting it outright.

This powder keg of a film gets an uneven audio-visual presentation but a confident and enlightening commentary track from Emerald Fennell.

Three Pines Review: A Detective Tale That Offers Less Than Meets the Eye

Review: Gareth Edwards’s Godzilla Gets the Theatrical Clarity It Deserves on 4K