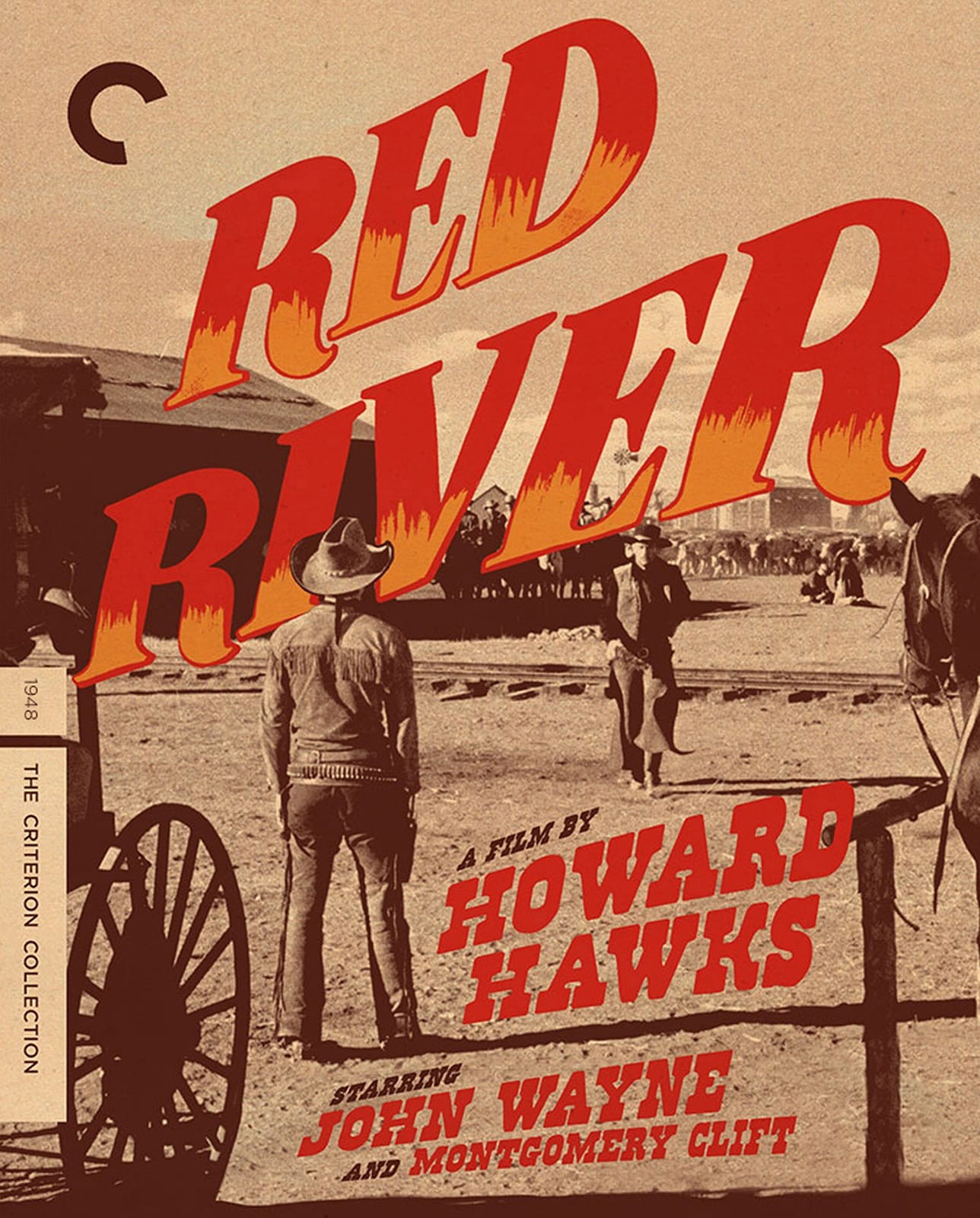 Released in 1948, Red River was director Howard Hawks’s first western, a genre which would come to define the next 20 years of his career. It was his previous two decades working in the Hollywood studio system, however, that had prepared him for such a logistically unique venture. Already a proven master at everything from gangster films (Scarface) to screwball comedies (Bringing Up Baby) to wartime dramas (Sergeant York), Hawks wasn’t only predisposed to experimenting with different narrative models, but preternaturally equipped to do so; his efficient approach to production, stylistic economy, and empathetic sense of psychology would render even the grandest concept or unpleasant characterization approachable in both scale and sympathy. Red River is perhaps the foremost example of this duality, forging an intimate moral study from the extreme impositions fostered by such an unforgiving environment as the Old West.

Starring John Wayne as hard-nosed cattle rancher Thomas Dunson and Montgomery Clift as his would-be son turned adversary, Matthew Garth, Red River is an at once detailed and sprawling account of bygone labor relations and the contradictory codes of masculinity. The film, adapted by Charles Schnee and Broden Chase from the latter’s short novel, is comprehensive in its approach to its subjects, resembling in its thematic breadth an exhaustive tome rather than a three-act studio production. Indeed, Red River is unique in its overall structure and expositional integrity, proceeding via an internal dynamism which favors character over plot concession. It begins, for example, with a full 20-minute preamble to the primary plot, which introduces the film’s central characters, including our narrator, Nadine Groot (Walter Brennan), along with a number of others who will never be heard from again. Dunson’s dedication to his profession is established in these early moments, most decisively when he abandons his love interest, Fen (Coleen Gray), in favor of fulfilling his dream of returning to his native Texas to build a cattle ranch. When we later learn of Fen’s death at the hands of a tribe of Native Americans, Dunson expresses little emotion.

Jumping 14 years into the future, the narrative then commences with Dunson, Groot, and Garth—now grown up and every bit the potential rival of his adoptive father—in the throes of a cross-country cattle drive to Missouri. Much of the middle portion of the film is given over to depictions of the procedural duties and relations of the troupe, in a democratically disseminated fashion sympathetic to the roles of even the most inconsequential of characters. What Hawks devises from this swath of disparate personalities is a memorably colorful assemblage of individuals whose alternately carefree and selfish idiosyncrasies conflict directly with Dunson’s stern, unsparing demeanor. Following a series of mortal retributions at the hands of their leader, the outfit decides to once and for all stage an uprising. Led by Garth, the drive continues on while Dunson is left to mend his wounds, regroup, and set out to kill his former protégé and reclaim his cattle in the process.

The psychology behind the rebellion is expertly built and realized by Hawks, posing the physicality of the landscape and nature of the enterprise as further elements in a combustible assemblage of vocation and virility. It isn’t until 90 minutes into the film that a love interest is introduced for Garth, a substantial amount of time for a mid-century studio picture. But in the absence of Dunson, the relationship between Garth and Tess Millay (Joanne Dru) is given ample time to develop; by the time of our male protagonists’ inevitable showdown, Tess will have become such a force that her instincts will prove key in alleviating any lingering bad blood between them. This climax—or rather, anticlimax—is one of Red River’s most unexpected detours. Rather than devolve into significant violence or outright tragedy, the conclusion to the film is abrupt yet accommodating, based largely around reasoning and respect, two qualities which deflate much of the male posturing which has led to this point. Hawks’s intuitive sympathies and rejection of divine rationale—or, as Andrew Sarris called it, his lack of metaphysical vision—further ground his characters in their given environment, eliciting nascent displays of humanity which transcend the confines of narrative. It’s a seemingly antithetical approach which separates Hawks’s cinema from its contemporaries and, in the case of Red River, shifted the moral viability of the western genre all at once.

The Criterion Collection resurrects the original theatrical version of Red River, unavailable for years, in a dual-format package for their inaugural Howard Hawks release. Also included on a separate disc (that’s two Blu-rays and two DVDs in one package) is the longer pre-release version of the film, which excises the narration for scrolling on-screen text and includes additional scenes and an extended ending. Picture quality between the two versions is all but identical: the image is bright, but not too soft; grayscale is well contrasted with hints of texture; depth is preserved and notable damage has been mostly removed. Sound, meanwhile, is presented in a linear monaural track, staying authentic to the source while cleaning up any extraneous surface noise. Effects are therefore sharp, dialogue is upfront and easily discernible, while Dimitri Tiomkin’s score is crisp and occasionally robust.

Considering the stature of the film, the supplements are somewhat modest. Included are three interviews: one with Peter Bogdanovich discussing his relationship with Hawks and the two versions of Red River; the second, with critic Molly Haskell, deals with the themes, style, and context of the film’s production; and the third, with film scholar Lee Clark Mitchell, approaches the film via its source text, its eventual adaptation, and the resulting film’s place in the western genre. Elsewhere there’s a welcome audio conversation about the film between Bogdanovich and Hawks from 1972 (they discuss, among other things, the two versions), an audio interview with Borden Chase from 1970, as well as a recording of the 1949 Lux Radio Theatre adaptation of Red River. Also appended to the package is a handsome booklet featuring an essay by critic Geoffrey O’Brien and a 1991 interview with the film’s editor, Christian Nyby, in addition to a separate, full paperback edition of Borden Chase’s original novel.

Howard Hawks’s first western arrives in a handsome dual-format package from Criterion including the long-unavailable theatrical cut of the film.