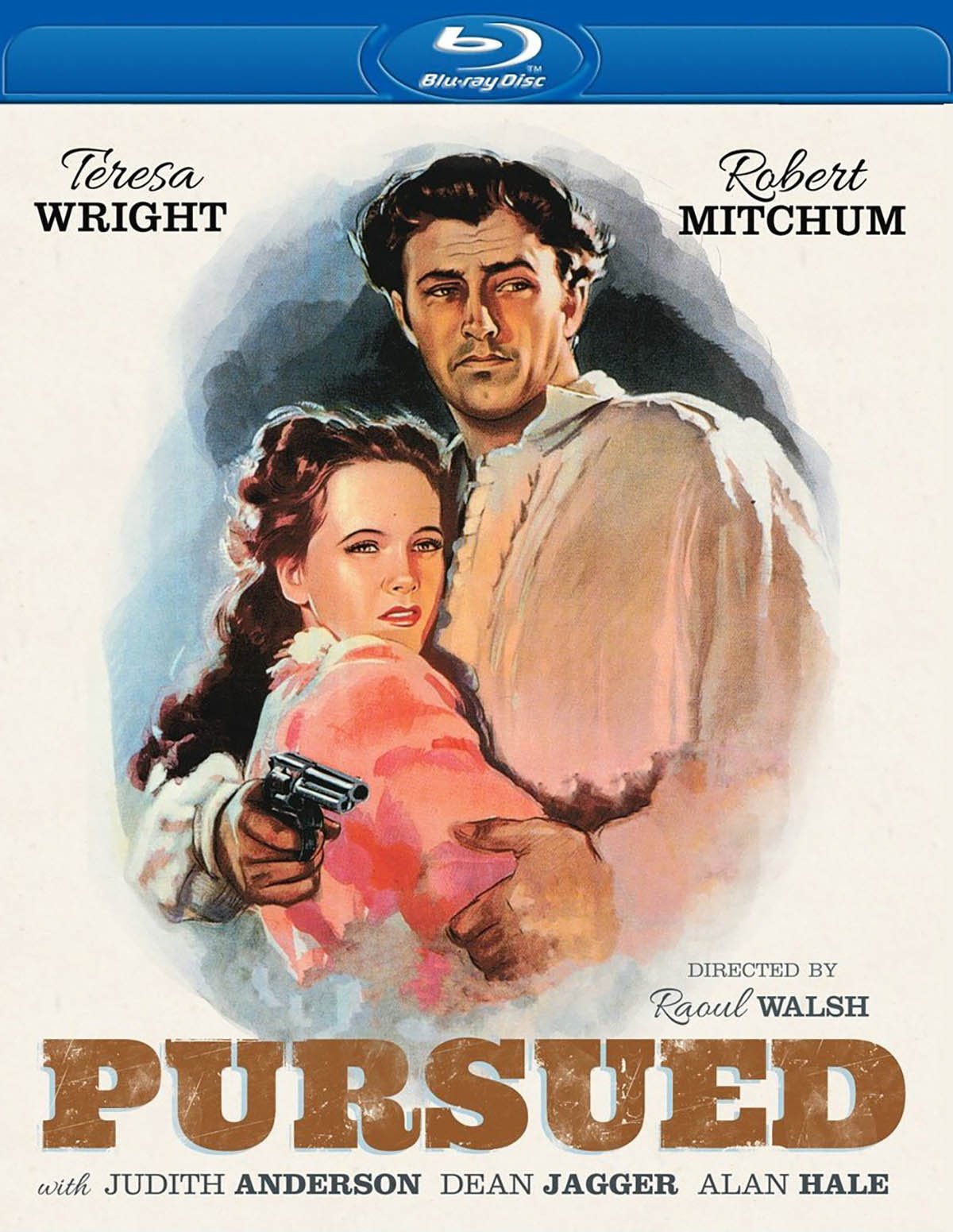 Nineteen forty-seven was a crucial year for Robert Mitchum’s rising star: The enduring popular classic, of course, is Jacques Tourneur’s seminal Out of the Past, and he headlined Edward Dmytryk’s Oscar-nominated prestige thriller Crossfire. It’s in Raoul Walsh’s noirish, Freudian western, Pursued, that we see Mitchum crossing the divide between what Hollywood expected of the young man, and the godlike figure they got in return. As a total menu of Mitchum’s various modes, it’s an uneven mix of the young, beefy neurotic with a few too many shirt buttons undone, the high-riding titan who would star in The Night of the Hunter, and the varnished-oak elder statesman who still has a few moves left in him, in Farewell, My Lovely and The Friends of Eddie Coyle. But it’s an unevenness that’s part and parcel with the scrambled, genre-hopping style of complicated übermensch auteur Raoul Walsh.

Glancing at some of the best-known films of his six-decade career, it’s easy to figure that Walsh was some kind of unreconstructed hard-ass, swilling whiskey with one fist, driving railroad spikes with the other. His public image, eyepatch and flinty demeanor, didn’t seem to contradict this, nor did his recurring themes of brute force, conquest, victory, and male bravado as a value equivalent to any other virtue. He transformed General Custer into a dashing, unfairly maligned boy-hero in They Died with Their Boots On, perfectly suitable for Errol Flynn’s swagger, while Me and My Gal put a slap-happy spin on police brutality and drunken revelry.

An appreciative relationship with Walsh’s films requires a bit of work, multiple chemical baths in his seemingly snub-nosed themes and attitudes. After sufficient exposure, the bloom of a shrewd, committed visionary emerges, which, once seen, cannot be unseen. Auteurism, which is often mistaken for a game of “spot the recurring theme,” validates Walsh not because he keeps trying to draw from the same well of content and narrative, but because his preferred thematic business is indivisible from his (similarly identifiable) mise-en-scène. In Walsh, as with any master, the themes are evident in the hills, the walls, the faces, the fists, and the guns.

Pursued, like many Walsh westerns, epics, and noirs, tells the story of a man seeking to gain ground between his self-determination and the choices that have been made for him long ago. As it begins, Jeb Rand (Mitchum) is on the run from faceless pursuers. Thor (Teresa Wright) comes to his aid in his hour of need, and it’s unclear if Jeb is on the lam for wrongdoing or a misunderstood right. The scene, a common one in ‘40s crime movies, can scarcely hint at the intricate, tightly enmeshed truths that are gradually parsed out as the movie backtracks and restarts, from Jeb’s long-ago childhood as, fittingly, a bullied, cowering child.

What unspools is a lengthy, episodic rise-and-fall tale, with a nesting-dolls structure that spells doom for its characters simply by inscribing the limits of their self-determination against what other plans the universe has in store for them. If Hitchcock ever made a western, it would undoubtedly preserve a grain of hope for its principals; by contrast, that sort of sentimentality is unthinkable in Walsh. At times pointing up the soundstage artifice of Pursued (sort of The Man Who Shot Liberty Valance avant la lettre), Walsh pushes his lancet through heroism, the righteous kill, even romantic love. The remedial simplicity of the plot’s resolution paradoxically fits the universe the film inhabits: capricious but grave, fickle yet unfailingly precise.

Fair on both counts: The grayscale is a little milky, and there’s some shimmer in the shadows, but Olive Films’ high-definition transfer has no major drawbacks, and the undemanding mono soundtrack is clear and crisp.

In a fit of generosity, Olive Films saw fit to include a single extra: a two-minute introduction to the film by Martin Scorsese, clearly (as his hair is more pepper than salt) recorded around the time of A Personal Journey with Martin Scorsese Through American Movies.

Behind the anonymous-sounding title is a quintessential Walsh noir-western, with a lead performance by Robert Mitchum that contains multitudes.