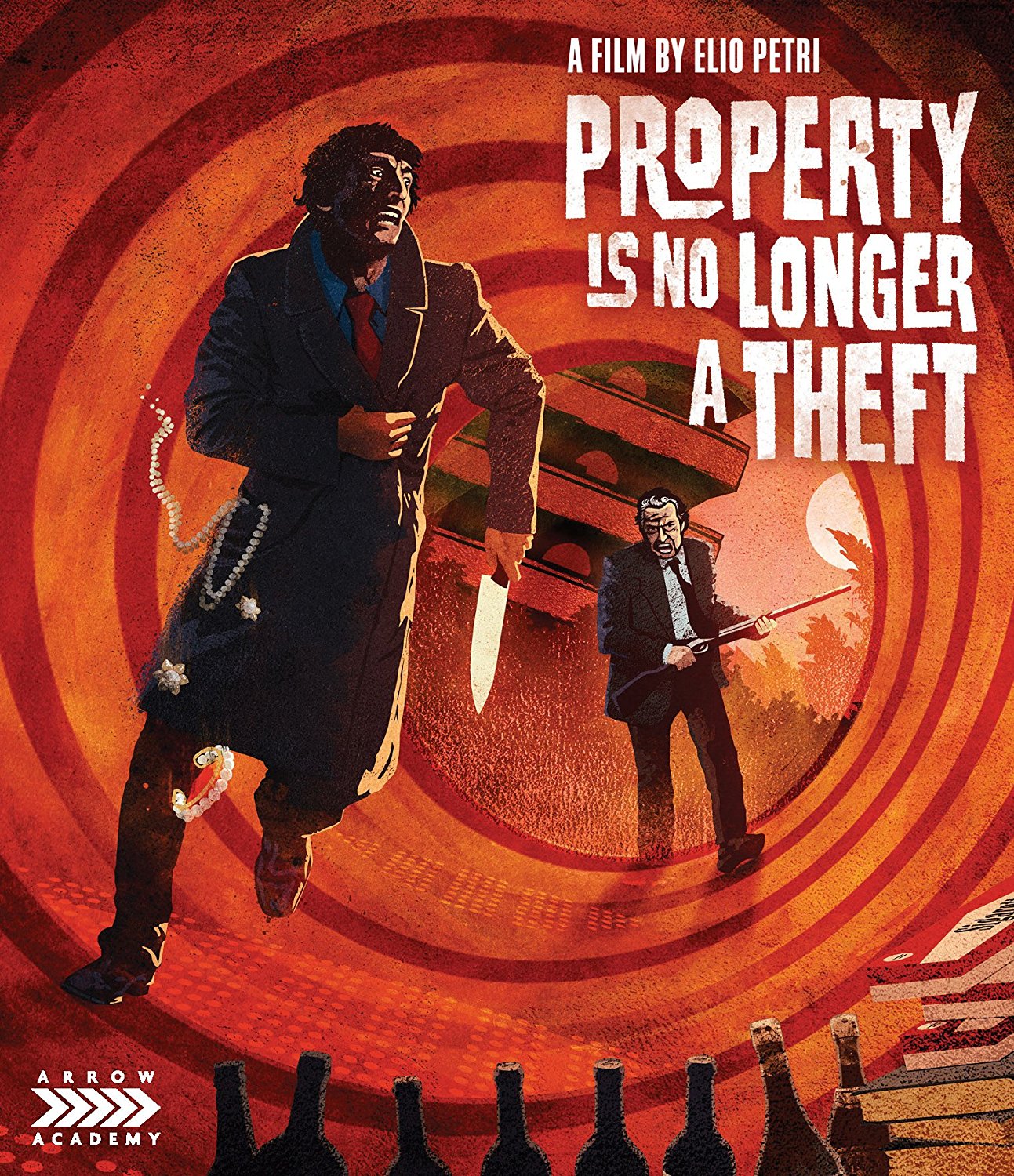 “Banks are for people who have money,” solemnly intones the bank director (Julien Guiomar) early in Property Is No Longer a Theft, Italian filmmaker Elio Petri’s dark satire on ownership and its discontents. The bank director has flatly refused the request for a pittance of a loan by Total (Flavio Bucci), the institution’s twitchy resident bookkeeper, who, ironically enough, proves allergic to the filthy lucre he handles all day long. This rejection comes hard on the heels of the bank director’s reluctant approval of an exorbitant advance to a blackmailing butcher (Ugo Tognazzi) who routinely grafts the bank’s employees with prime cuts. Incensed by such flagrant injustice, the number-cruncher (after promptly resigning his post) declares an escalating war of attrition on the flesh-peddler.

The film builds on this broad premise with an episodic brio reminiscent of early-1970s commedia all’italiana titles like Lina Wertmüller’s manic Love and Anarchy. For example, the deliriously staged opening bank robbery includes, as a sort of surrealistic flourish, a pack of vicious guard dogs that can be unleashed at the push of a button. Nevertheless, several key factors successfully set this film apart, from Petri’s endlessly roving camera eye, to the cutting political edge to the characters’ sardonic disquisitions on the philosophical notions underlying “being” and “having,” to one intriguingly Brechtian formal conceit: Every so often, the action grinds to a halt, making way for an absurdist-theatrical blackout sketch (literally so, since these scenes are always swathed in tenebrous blacks) in which one of characters holds forth in mock-poetic fashion about what makes them tick.

The film derives its title by cheekily negating the pithy slogan “Property is theft!” first articulated by 19th-century French anarchist Pierre-Joseph Proudhon. According to the film, the “proper” notion of property can be stated thus: Possessions possess their own inherent properties, so that theft becomes nothing less than the complete confusion of the proper order of things. Total’s campaign of terror against the propertied butcher—who brags that tax-exempt “secret slaughterhouses” can be counted among his holdings—is therefore also guerrilla warfare on this kind of late-capitalist logic. “Stolen food tastes the same as bought food,” as he informs his father (Petri mainstay Salvo Randone), a spectral lifer in the same bank who gauntly haunts their shared apartment. Nor is this the film’s only act of assertion through negation: The dictum “Man is a carnivorous animal” is grandiloquently embossed on the butcher shop wall, which conveniently elides the phrase “Is it not a reproach that…” that opens this quotation from Walden. Leave it to the butcher to misappropriate stock in H.D. Thoreau and company.

Like Petri’s earlier sci-fi satire The 10th Victim, Property Is No Longer a Theft toys with the imagery of the Pop Art movement. An enormous reproduction of Lee Falk’s Mandrake the Magician comic strip adorns the wall in Total’s room, alongside a portrait of Karl Marx; not for nothing does he self-describe as a “Mandrakian Marxist.” For Total, to steal is to make things disappear with all the aplomb of a master magician, which he proceeds to do with the butcher’s knife, hat, and, ultimately, even his girlfriend, Anita (Daria Nicolodi). When Total trails the couple to an exhibition of burglar-proof devices, not only do the items resemble a series of readymade avant-garde installations (including dozens of pistols and rifles dangling from the ceiling like so many Alexander Calder mobiles), but the scene folds in a hilarious nod to Mario Bava’s Danger: Diabolik, in turn based on a wildly popular Italian comic-strip character.

As the vendetta between Total and the butcher spirals out of control, Total briefly finds himself in league with professional thief Albertone (Mario Scaccia), whom he later rejects on account of the burglar’s insistence that theft is entirely a for-profit venture. To the contrary, Total steals because he wants to reduce the butcher to nothingness, an excessive and ultimately destructive obsession. But before that can happen, Albertone dies while under police interrogation, an ignominious end that will be politely described as “a workplace accident” during his public eulogy by his confrere, Paco the Argentinian (Gigi Prioetti). Cops and robbers, Paco asserts, are merely two sides of the same coin: Both are essential to keep the political and economic system running smoothly. Or, as Paco puts it, “Our theft covers and justifies theirs!” And so Total ultimately must be eliminated because his larceny is anarchic and idiosyncratic, contributing nothing to the system. Indeed, he declares himself dead set on its—at least symbolic—overthrow.

Arrow’s restoration of Elio Petri’s film looks remarkable. The cinematography often fills the frame with darkness, but there’s very little evidence of crushing. The fine details of the funky modernist décor and costuming are well-delineated, flesh tones are lifelike, and grain levels look properly cinematic, without any distracting noise. The mono PCM mix sounds robust, lending ambient effects some depth, and doing justice to another fantastic Ennio Morricone score, with its jaunty pizzicato main theme for brass and strings, as well as some odder cues involving whispers, moans, and buzzing synths.

Actor Flavio Bucci, arguably most famous for his role as the blind pianist in Suspiria, talks about making his film debut in Petri’s The Working Class Goes to Heaven, shares his nickname for the director (“the Bigwig”), points out producer Claudio Mancini’s cameo in Property Is No Longer a Theft’s opening bank robbery, describes acting as “a profession for thieves,” and expresses admiration for his costars. Producer Claudio Mancini discusses working with Petri for the first time as production supervisor on The 10th Victim, adumbrates the Italian political climate in the early 1970s during the so-called “Years of Lead,” mentions that an empty church doubled for the vast bank set in Property Is No Longer a Theft, and marvels at Petri’s penchant for buying up properties around Italy despite his radical political leanings. Makeup artist Pierantonio Mecacci mentions how his friendship with Daria Nicolodi led to work on a number of Dario Argento films starting with Suspiria, laments the difficulties involved in maintaining Mario Scaccia’s Victor/Victoria-style makeup, and recounts asking Petri to be best man at his wedding.

This dark satire on ownership and its discontents makes its Blu-ray debut with a remarkable 4K restoration and a trio of informative interviews.

Review: Jacques Demy’s The Umbrellas of Cherbourg on Criterion Blu-ray