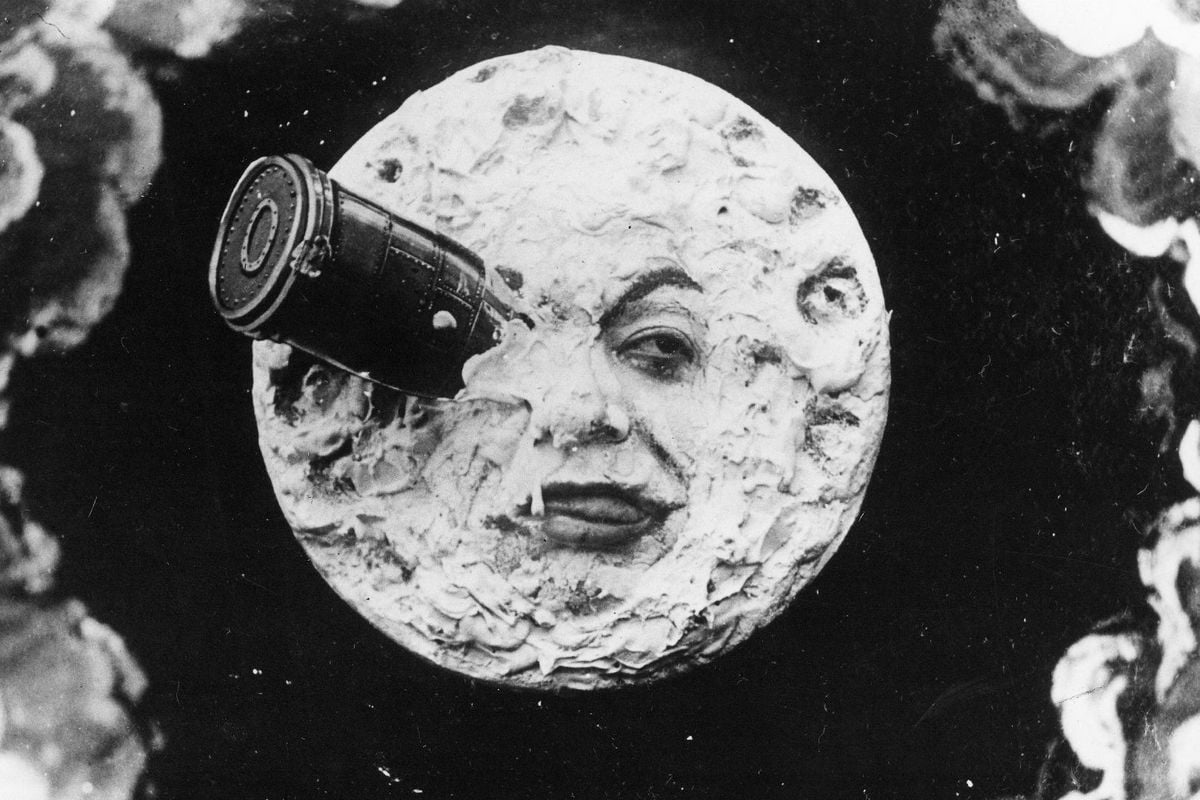 Georges Méliès’s world may be marked by an atmosphere of wondrous possibility, but it’s also reflective of a perpetual frustration. For every fantastic voyage that ends in new discovery and a safe trip home, there’s a character who’s prevented from carrying out the most routine tasks (sitting on a chair, eating a meal) by the manipulations of malevolent (that is, directorial) forces. On the new Flicker Alley box set, which comprises all 173 extant Méliès films, spanning from the “actualités” of 1896 to the mini-epics of 1912 and 1913, we’re given a chance to trace the entire trajectory of an extraordinary career. What we find is a world opened up to new possibilities of the fantastic by both technological advance and the transformative power of the imagination, but at the same time complicated by a marked ambivalence on the filmmaker’s part. Still, if the earlier works are more likely to conceive of this world as being governed by a comic mischievousness, then many of the later efforts, even while maintaining an undercurrent of menace, look on the unknown with an open sense of wonder.

If I’ve described Méliès’s films as constituting a “world”, then I’ve meant it strictly in terms of authorial viewpoint, not in the sense of creating any self-contained fictive space. Fitting squarely into an anti-illusionistic tradition, the films are generally acted out in front of a painted backdrop in the filmmaker’s studio. Drawing on his experience as a stage magician, Méliès began his career by transferring his tricks to the screen, heightening the sense of illusion with the possibilities of the new medium. In a famous bit of Méliès lore, he discovered his signature stop-motion technique when, filming a street scene, his camera jammed, eliding several minutes of footage with the result that, when he screened the dailies, a truck had transformed into a hearse. Taking this as a central editing principle, Méliès created a cinema of miraculous transformations, with men morphing into fantastical creatures, women suddenly appearing and just as suddenly vanishing, and painted figures coming to life. If the filmmaker’s stagings, generally comprised of flat, de-centered compositions, seem largely theatrical, then his editing marks his work as uniquely cinematic. Drawing on a sophisticated usage of stop-motion and multiple exposures, a two-minute piece may feature dozens of cuts, perfectly aligned so that the only noticeable change in the staging is the central transformation. Although often consigned to a theatrical filmmaking tradition that failed to take advantage of new techniques, Méliès’s editing places him among the most accomplished craftsmen of the early cinema. (The launch and landing of the spaceship in 1902’s A Trip to the Moon, for example, features four takes in 20 seconds of screen time, considered the most rapid cutting of its day.)

Notwithstanding the occasional stab at historical recreations or the first of his longer narrative pieces, the bulk of Méliès’s efforts in his first ten years of filmmaking—covering roughly the first half of the boxed set—is given over to these short cinematic magic tricks. If these pieces are marked by a delight in invention, then, they also betray a conception of the world as perpetual disappointment. For all the fantastic possibilities opened up by the presence of magic, there’s the sense that this magic exists primarily to thwart the efforts of characters to achieve even their most basic needs. Whether the agency is attributed to devils and demons or to Méliès himself in the guise of magician (or the whole thing is simply presented as a dream), the result is a world where objects disappear at the moment when they’re about to be grasped and beautiful women turn into ogres before any sort of romantic consummation can take place. One early piece, anticipating Buñuel by some seventy years, finds a man’s meal constantly disappearing just as he’s about to eat. As it shifts to another corner of the screen, the man follows it around the frame only to meet with continual disappointment as the food remains one step ahead. In a later piece—more tragically—a drunkard suffers the ultimate disappointment when, after making a mess of his life, he’s prevented even from committing suicide.

While these shorter pieces give off a sense of perpetual frustration, Méliès soon turned to more ambitious projects in which he began to look on the universe as an object of wonder. Although the later stages of his career find him exploring a diverse range of genres, it is chiefly these exploratory “fantasies” on which his reputation rests. Integrating the strategies of his earlier pieces into an increasingly longer, narrative-driven framework, these films offer the best vehicles for bringing out Méliès’s imaginative capabilities. His first great longer success, 1902’s A Trip to the Moon, introduces the basic template. Against a lunar landscape built from multi-tiered studio backdrops, Méliès stages a series of theatrical tableaux which find the “astronomers” grappling with any number of menacing obstacles. Lacking smooth narrative transitions, he relies on a narrator to guide the audience through the action. (The Flicker Alley set uses the same heavily accented readings—by Serge Bromberg and Fabrice Zagury—familiar from previous DVD compilations. As Méliès’s skill in staging improved in his later work, he would drop the narration.) Drawing on the full range of his technique—multiple exposure, animation, stop-motion editing—Méliès creates images that, while neither believable as cinematic illusion nor as scientific possibility, when taken on their own terms, thrill with the sense of having sprung to life through the sheer force of invention. In the end, as the men of the astronomical society return to earth in triumph, all dangers overcome, the mysterious phenomena of the universe no longer register as sinister, ungovernable forces, but as objects of delighted contemplation.

Repeating the same strategies, Méliès crafted a half-dozen brilliant journey films from The Impossible Voyage and The Merry Frolics of Satan to his late triumph The Conquest of the Pole. What these films express above all is the pleasure to be found in the trip itself. In Frolics, a carriage streaks across the sky, past double-exposed stars, communicating the sublimity of motion. In An Adventurous Automobile Trip, a specially designed car completes a seventeen-hour trip in just a fraction of that time, tearing through all obstacles with joyful disregard. In other films, though, the possibilities of transportation are viewed with a more tempered enthusiasm, as in the masterful Tunneling the English Channel. Consisting of a long dream sequence collectively imagined by the French and English heads of state, the film depicts the completion of the tunnel designed to permit rapid underwater transportation between the two nations. The dream progresses from hope (a surreal sequence in which the two men stand on opposite sides of the Channel, their arms grotesquely expanding to join across the expanse) to realization, before giving way to disaster as a train crash causes the tunnel to become flooded. When the men awaken from their nightmare, they express reluctance to proceed with such a potentially dangerous undertaking.

In the tunnel dream, we find both sides of the Méliès equation: the hopeful possibilities opened up by new technologies (not least the movie camera) that offer access to new and fantastic worlds, and the accompanying threat of disaster—or at least significant frustration—that manifests itself in each phase of his cinematic output. After watching the thirteen hours of Méliès’s surviving work, what we’re left with is the impression of a spectacular, but continually threatening world. In the filmmaker’s universe, one is frequently forced to suffer in impotent passivity. The best his characters can hope for is to be allowed to look on unmolested, taking in the fantastical with an appropriate sense of wonder. Fortunately, for the viewer making his way through the Flicker Alley set, it is the latter response that most closely mirrors his own.