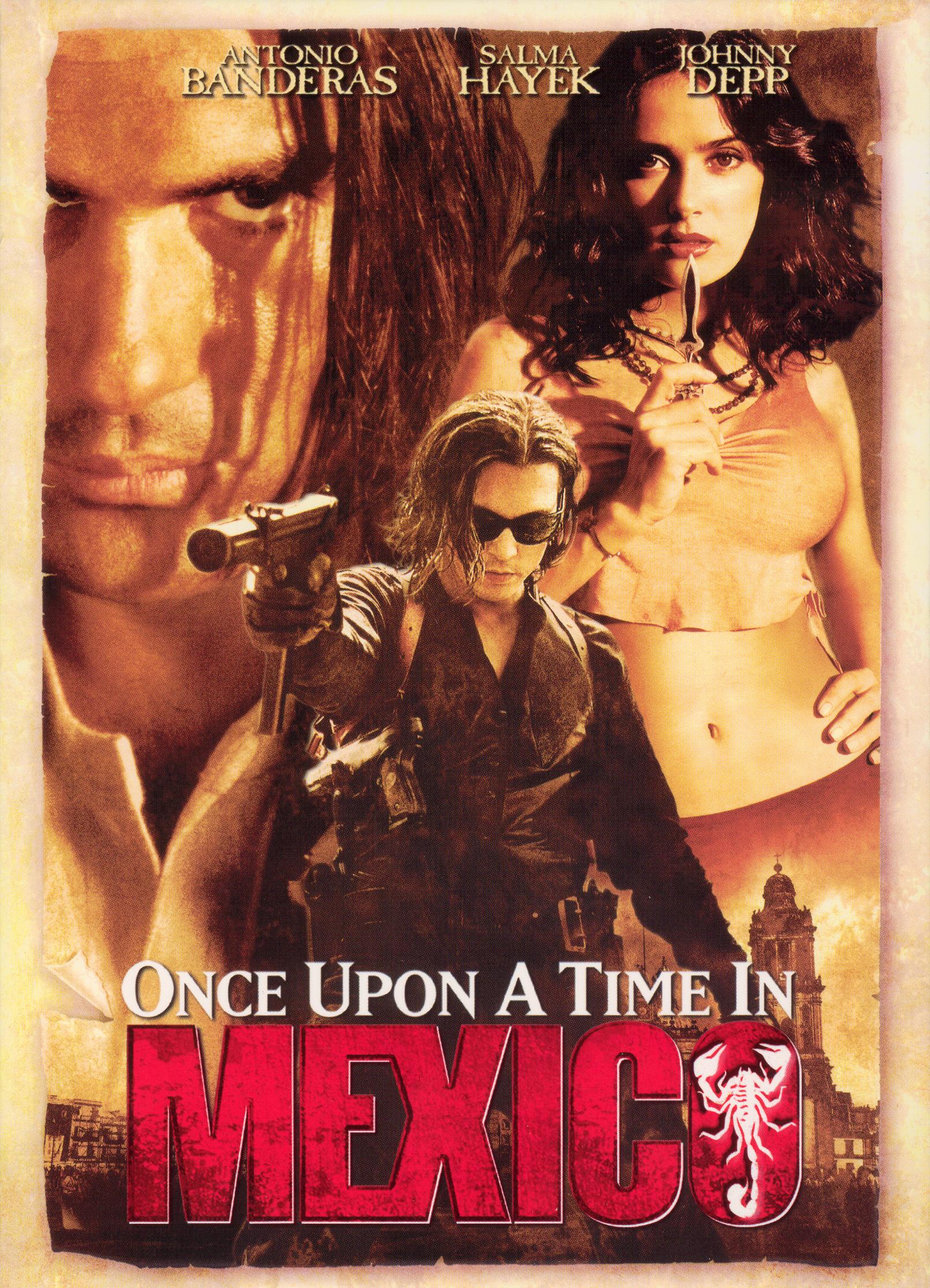 As Johnny Depp slowly becomes the Peter Sellers of his generation—he adopts a series of disguises as a renegade C.I.A. spook in Once Upon a Time in Mexico, handling the role with a light touch of prep school smarminess—Robert Rodriguez becomes the sell-out of his. The film aspires to the mythic grandeur of Sergio Leone, but lacks the epic scope. The sham plotting can be attributed to Rodriguez rewriting his script on the set (he admitted that it was unfinished when production began). El Mariachi (Antonio Banderas) is enlisted by corrupt Sands (Depp) in some elaborate scheme that involves a military coup, political assassinations, a drug kingpin played by Willem Dafoe, and a bunch of random bad guys (Mickey Rourke, Danny Trejo, and Cheech Marin hiding under an eye patch). Vaguely playing all sides against each other (though it’s often difficult to tell who is on what side and what they’re trying to accomplish), El Mariachi and his two brothers rediscover their passion as Sons of Mexico and work to defend their idealistic president. Round and round we go, with shootouts that show Rodriguez’s hyperactive glee, and although it’s expertly choreographed and undeniably well-photographed (in slick digital), Mexico’s ample bloodletting lacks purpose. Antonio Banderas kills many men, but there’s no actual feeling to this violence—which, I suppose, is the purpose of these larger-than-life operatic shootouts. As characters are mowed down like cannon fodder, the film grows increasingly rote. The final image has Banderas kissing the Mexican flag, but there’s little more than false patriotism at work here. More effective is Depp’s character, a bizarre lost soul without a country, wandering through the final third of the movie like the tragic Oedipus. As an iconic image, the actor captures the feeling of Rodriguez’s movie: blinded and shooting randomly in all directions.

Ah, the glory of high definition video. No one will be able to tell you that Once Upon a Time in Mexico looks remarkably film-like, but this is just about as close to a reference quality transfer as you’re likely to see from Columbia TriStar Home Video. Edge enhancement is nil and colors are gooey, but there are some compression artifacts here and there, which could have been avoided if the supplemental materials had been plopped on the second disc. Robert Rodriguez is a wacky visualist but his sound designs are usually more impressive, and the Dolby Digital 5.1 surround track is beyond explosive.

The movie geek commentary by Robert Rodriguez moves at lightening speed and needs to be heard to be believed. His film is barely watchable, but I could listen to this track over and over again. As an added bonus, Rodriguez contributes his thoughts on a second commentary track that isolates the film’s music and sound. Next up is a series of top-of-the-line featurettes that suggest the auteurist Rodriguez was allowed free-reign over everything from the film’s production to the DVD’s supplemental material: the flashy and wacky “Ten Minute Flick School: Fast, Cheap and in Control” puts to shame your average junket-whorish making-of featurette; “Inside Troublemaker Studios” shows us what Rodriguez was able to do to his garage after all the money he’s made in Hollywood; the director teaches us how to make puerco pibil on “Ten Minute Cooking School,” which doesn’t actually run for 10 minutes; “Film is Dead” allows Rodriguez to explain the challenges of DV before a poorly-microphoned audience at Sony’s Cary Grant Theater; and “The Anti-Heroes Journey” is an excellent chronicle of the evolution of the film’s hero from El Mariachi to now. Also included here are “greenband” and “redband” trailers of the Once Upon a Time in Mexico and eight deleted scenes with optional commentary. Also, check out the massive gallery of previews: Hellboy, Resident Evil: Apocalypse, Big Fish, Desperado, El Mariachi, In the Cut, The Missing, Underworld and You Got Served.

A lousy film but this Once Upon a Time in Mexico DVD features one of the most personable collections of supplemental materials amassed for a major DVD release in quite some time.