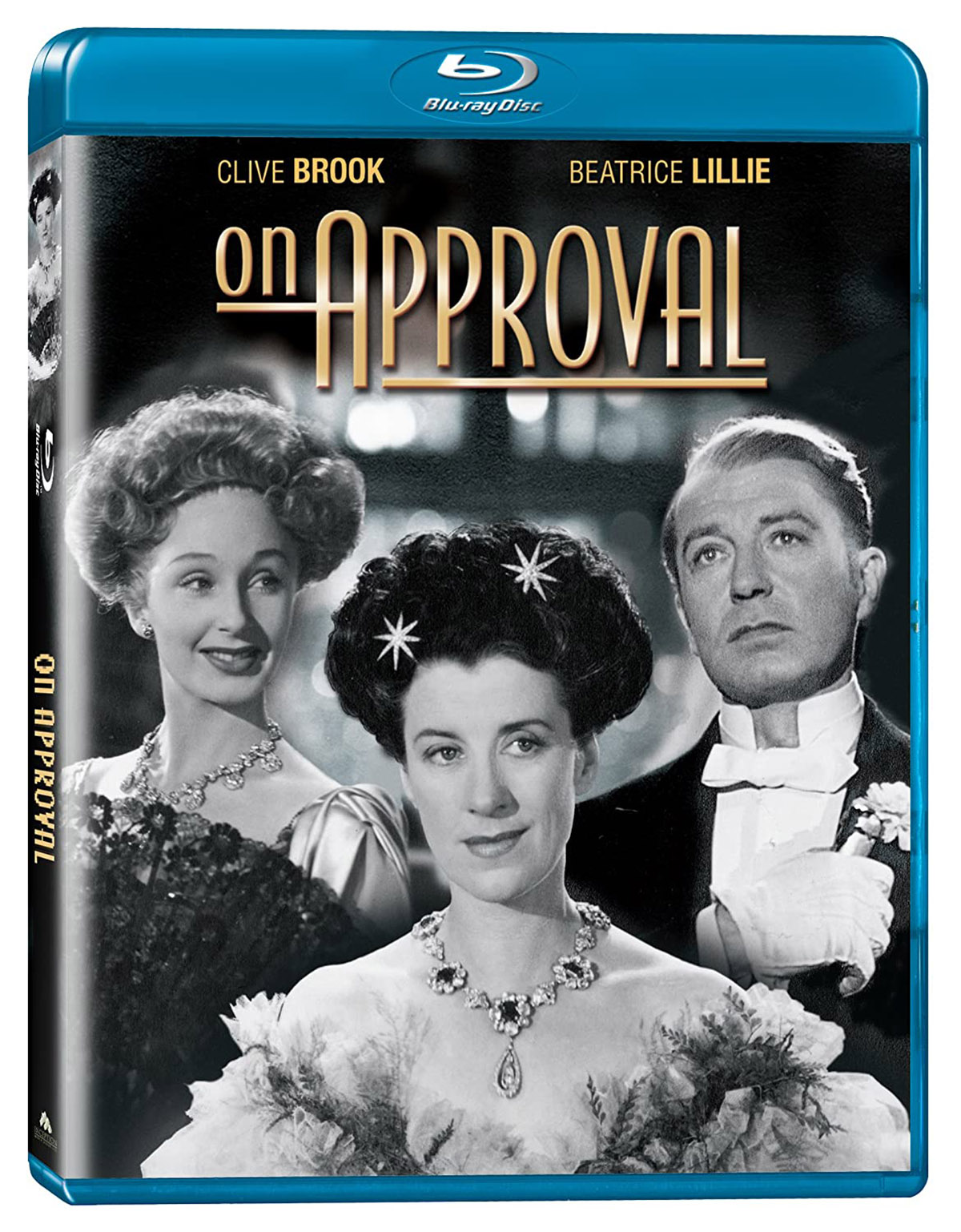 Both effervescent and devilish, both unabashedly stagey and vertiginously cinematic, Clive Brook’s sole directorial credit, On Approval, looks and feels like little else begotten by British cinema in the 1940s. Transposing Fredrick Lonsdale’s West End hit about the roaring ’20s into a Gay Nineties satire, the film pokes fiendish fun at Victorian strictures like a cousin to the Korda brothers’ wryly ravishing period pieces—albeit a prankster, dipsomaniac one. Even the plot is self-amusedly wobbly; it concerns a rich, fussy widow who’ll only marry a down-and-out nobleman after the two spend a celibate “trial month” at her cottage in the highlands. But it’s the film’s forward-thinking photography, and especially the use of frenetic montage, that truly defines the movie’s singularly dry and bubbly aesthetic. While the cast makes little effort to conceal the production’s artifice or silliness (they often play to the fourth wall), the plethora of cockeyed cuts that shuttle them through their comedy of manners repeatedly converts theatrical artifice into a projection of psychology. After first presenting his characters as exaggerated socio-economic types, Brook bores full-tilt into the sexuality their milieu has both repressed and mutated—discovering, in the process, a subtextual universe made moist by urge-suppressing whisky sodas, teasing sashays, boyishly knocked knees, and haunted moose heads.

A Sacha Guitry-esque prologue playfully smears us backward through British history with manic-paced stock footage; the blaring guns of World War II give way to silly sporting events and fin-de-siècle equestrian outings before finally arriving at the simpler, nobler, “men were men and women were women” pageantry of the late 19th century. The story proper begins with a haute-culture soiree, which preps the plot and introduces the four central characters: the rich but icy widow Maria (Beatrice Lillie); her smarmy American friend, an heiress to a pickle company named Helen (Googie Withers); the widow’s milquetoast nobleman-suitor, Richard (Roland Culver); and a flamboyantly misanthropic, as well as flamboyantly penniless, duke (Brook himself). Predictably, this party sequence splits the quartet up along colluding gender lines in order to lay narrative groundwork, but Brook slyly cross-cuts between the girls and boys as they chat about one another on parallel conspiratorial paths, avoiding blocks of uninterrupted conversation in favor of contrapuntal snippets. Ping-ponging between various expressions of social and sexual anxiety, these edits flatten the film’s landscape of desire: We discover that whether male, female, rich, or poor, all four of these characters want only to wake up to a face every morning that they don’t instantly feel the urge to punch.

After Maria and Richard abscond to Scotland with Helen and the Duke following (and scheming to keep the proceedings as proper and as improper as possible, respectively), a lysergic montage pistons us forward three weeks in a blur of churning dingy oars, shrill piano recitals, and the rhythmic crashing of dinnerware. Barbs of Evelyn Waugh-ish wit punctuate the dialogue throughout (“How was it that you lost all your money again?” “Women.” “Yes, but your big money.” “Big women!”), yet it’s these dream-like sequences that most fiercely investigate the film’s themes. Some oneiric sequences even rival the dewiest of Vigo and Cocteau. When Richard’s visited in the night by visions of Maria’s dead husband, he speaks through one of the stately if foreboding bull-moose heads that adorn the posh cottage’s walls; the inherent combativeness that pervades domestic relationships for better or for worse has rarely been symbolized with such nipping social specificity. (First the barbarism of game hunting is smirkingly suggested as over-compensation for having abdicated one’s household to one’s wife; then the dead husband’s goofy “haunting” of the moose head shows how ridiculous such tokens of virility look without the context of a human male’s braggadocio.)

Where the deft, zigzag-y editing during the party scene in act one showed the external pressures that the quartet must overcome in order to inveigle domestic bliss, these surreal moments represent the internal stress involved—stress that, presumably, would be eradicated by the sex Maria’s proposal has prudishly rendered verboten. And while the film’s denouement bashfully pretends to have told the story of two couples who, having learned the worst of what each partner is capable, resolve to fall in love anyway, what precedes this capper isn’t quite so lighthearted. If one listens closely, he or she can hear the moose head issuing a very exigent warning—namely, that sex is the only thing that makes cohabitation at all tolerable, and the only thing worth approving.

While far from unbearable, the technical quality of this Blu-ray falls far short of what On Approval deserves, possibly due to irreversible damage to the source print; in the opening half hour especially, grit and splotches are visible in practically every shot (partially due to the use of archival footage), and the dialogue’s occasionally drowned out in hiss. A lack of subtitles in any language exacerbates this issue. The image recovers somewhat in the second act, but the contrast remains rather weak and fuzzy throughout. Since this is the best version of On Approval out there, it’s still highly recommended, but in high definition the cursory restoration job provided the film is made gratingly evident.

The most entertaining supplement is an interview with Googie Withers circa the late 2000s; she nostalgically recalls working with Clive Brook on the timing of several gags in the film, an experience she likens to her background in dance. Jeffrey Vance’s commentary is a mite stuffy in comparison, and short on mise-en-scène analysis, but he provides a wealth of fascinating background information—especially on Frederick Lonsdale, the writer of the original play. (Lonsdale would go on to work with Alexander Korda’s production team on The Private Life of Don Juan, among other movies.) Curatorial liner notes by Scott Eyman are the only contents in the set’s small booklet.

Possibly the best non-Ealing British comedy ever made, Clive Brook’s On Approval has unfortunately received a Blu-ray treatment of which the serious cinephile can’t quite approve.