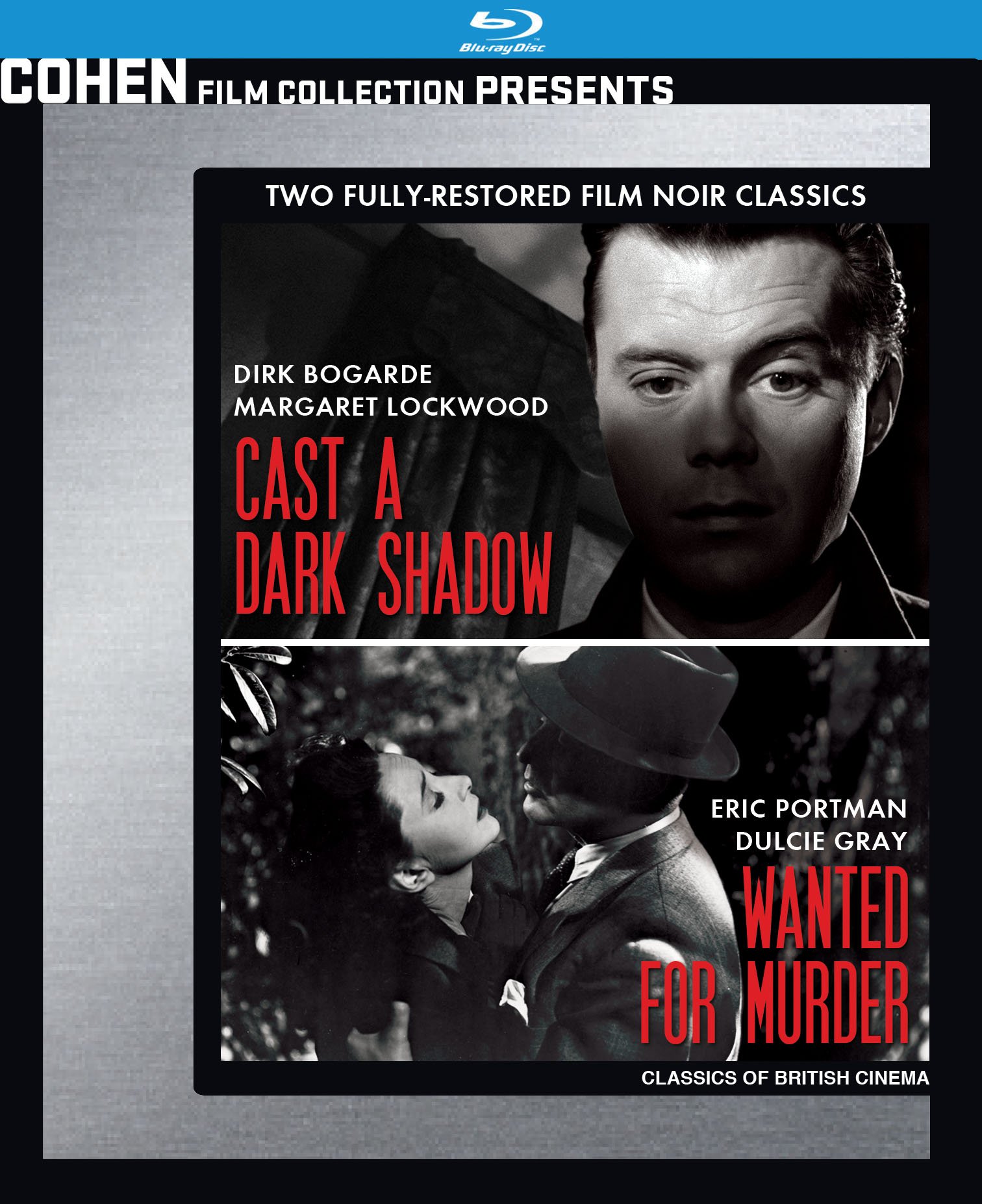 Lawrence Huntington’s Wanted for Murder and Lewis Gilbert’s Cast a Dark Shadow are two relatively unknown British noirs that peel back the thin veneer of politesse that hides the psychopathic impulses of their male protagonists. Wanted for Murder’s Victor Colebrooke (Eric Portman) and Cast a Dark Shadow’s Edward Bare (Dirk Bogarde) are afflicted with the instinct to ensnare and murder the women closest to them—the former supposedly due to a psychological condition passed down to him by his father and the latter purely out of lust for money. Despite the disparate motives driving these killers, the films are similarly unsettling in their probing of the tortured, fragile psyches of posh British men who find their vice grip on society loosening in the new world of post-war England.

In Wanted for Murder, Victor’s twisted desires, particularly his need to strangle women, are explicitly linked to his deceased father’s occupation as a hangman. It’s a rather dunderheaded psychological rationalization for Victor’s motives, but the film is more nuanced in probing the man’s extreme fear of intimacy with any woman aside from his doting mother than such an outlandish conceit may suggest. Victor’s behavior could easily be read as a form of queer coding, especially later in the film when his once unquenchable need to kill gives way to a quietly expressed anguish and craving for an end to his inner tumult.

There’s something of a suicidal streak in Victor’s behavior. On more than one occasion he leaves behind a key piece of evidence at the scene of one of his crimes, and he goads Chief Inspector Conway (Roland Culver) by sending in postcards mocking the detective’s inability to catch him. Victor and Conway, who meet several times throughout the film after the former is pinned as a suspect in his first murder, pursue supremacy in their cat-and-mouse relationship, which is marked by a macabre sense of humor. Where Victor is almost repulsed by the women he kills whenever things turn erotic, he takes a perverse pleasure in his encounters with Conway, on an intellectual and perhaps even sexual level, discovering that the only way to get close to the one he’s really drawn to is by engaging in riskier and riskier killings.

In Cast a Dark Shadow, there’s also a certain desperation to Edward’s impulses, as well as a darkly humorous bent to the depiction of his arrogant belief that he’ll get away scot-free. But Edward isn’t tortured by any feelings of guilt or repression, and his suave yet detached demeanor makes him a more compelling and chilling figure than Victor; if he possesses any moral compass, it’s completely subsumed by his unadulterated greed. His unflappable playboy persona meets its match when his plans to inherit his older wife Monica’s (Mona Washbourne) fortune after murdering her are thwarted by his impatience and the meddling of his new love interest, Charlotte (Kay Walsh), and Monica’s lawyer, Phillip (Robert Flemyng).

Compared to the blackly comic Wanted for Murder, Cast a Dark Shadow is a more unfiltered noir, both in form and content. The latter’s visual palette abounds in deep shadows and canted angles, its atmosphere keyed to the terror felt by a once confident, nearly untouchable man as he’s caught in circumstances beyond his control. If Victor is plagued by sexual and emotional demons, Edward is a soulless vessel who treats the world as his playground, and women as his playthings. To him, their only value is their ability to enrich him.

With a third-act reveal, Cast a Dark Shadow teeters on the edge of the preposterous, but Gilbert’s assured direction, and Bogarde’s skillfulness at capturing Edward’s perversity and wounded neuroticism, prevents the film from ever going too far off the rails. And it’s in these final stretches that the fatalistic drive that marks most noirs is truly felt in the form of the inescapable retribution that falls upon Edward. Like Victor, Edward is a remarkably cocky man who, believing that he has the world at his fingertips, is inevitably confronted with the notion that he’s no longer the center of the universe. The world that birthed their psychoses has changed, and both men are left with a hefty, long overdue debt to pay.

Both films here have received new 2K restorations, but Cast a Dark Shadow looks noticeably more dapper on this Blu-ray from Cohen Media Group. Contrast ratio is strong, with deep black levels that highlight the film’s gorgeous low-key lighting, while the image is incredibly sharp and rich in details, from objects in the background to the numerous close-ups that highlight Dirk Bogarde’s masterclass in expressing emotional shifts with only a subtle change in facial expression. By contrast, Wanted for Murder looks more washed out. The picture is still sharp, but even in close-up, the lack of detail in the image is noticeable. The audio is serviceable on both films, but the dialogue is somewhat muffled across the board, so you’ll want to turn on the English subtitles in order to catch every last word.

Nothing but a theatrical trailer for each film.

Newly restored, Wanted for Murder and Cast a Dark Shadow are ready for rediscovery, but this Blu-ray release’s lack of extras is disappointing.

4K UHD Review: Powell and Pressburger’s The Red Shoes on the Criterion Collection