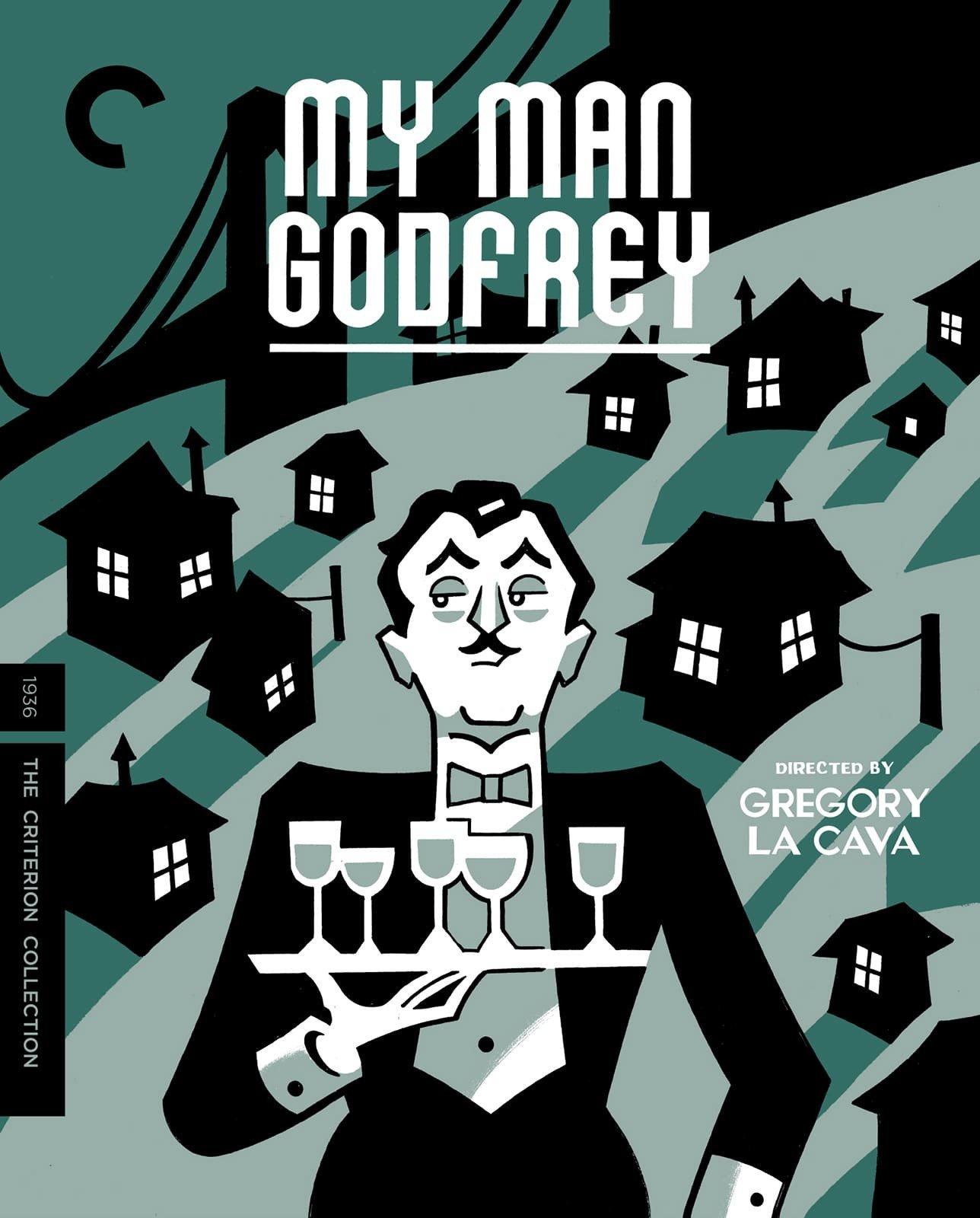 Gregory La Cava’s My Man Godfrey opens on a New York City dump near the 59th Street Bridge. One night, a group of high-society socialites abruptly arrives on the scene and a woman, Cordelia (Gail Patrick), approaches one homeless man, Godfrey (William Powell), and offers him $5 to let her borrow him for a scavenger party in which one item is a “forgotten man.” Godfrey’s body stiffens at this condescension, though he does agree to accompany Cordelia’s kinder, more outwardly fun sister, Irene (Carole Lombard). Though still disheveled in his filthy rags, Godfrey thoroughly outclasses the rich boors who gather around him, taking in his jocular inanity. His erudition barely masks a withering sarcasm that alternately delights and humiliates his social superiors. It comes as no surprise, then, that Godfrey’s performance so delights Irene that she offers him a job as her family’s new butler.

While employed by the Bullocks, Godfrey soon discovers that the family has become so insulated by their wealth that they can only engage in a kind of internal civil war of pranks and one-upmanship for their own amusement and validation. Cordelia and Irene’s sibling rivalry is an emotionally stunted one, while their mother, Angelica (Alice Brady), has a “protégé,” Carlo (Mischa Auer), who exists as an extended act of circumnavigating the Hays Code with euphemism after euphemism. The family patriarch, Alexander (Eugene Pallette), regards his family with the slipping sanity of a warden trapped inside his own asylum. In one particularly memorable scene, Cordelia spitefully attempts to fire Godfrey, causing Irene to throw such a ballistic fit that Carlo frantically, hilariously mimics a gorilla to amuse her as one would a screaming toddler. All the while, Alexander solemnly regards the scene, taking a tray of drinks intended for everyone out of Godfrey’s hands and instructing the butler to bring another platter of alcohol to his room in a half hour. It’s screwball by way of Tolstoy, projecting dysfunctional family dynamics and self-consuming bourgeois idyll through the antic lens of farce.

Godfrey, initially so wryly confident in his work, finds himself overwhelmed by the family’s manic energy, particularly as Cordelia and Irene make him a living battleground in their seemingly endless sibling rivalry. Cordelia, still smarting from Godfrey’s rejection of her when they met, conspires to destroy him, but the butler clearly guesses her intentions and takes steps to thwart her. Godfrey is less successful, though, in predicting Irene’s mood swings and affection for him. After Irene has her aforementioned fit, for example, she whispers to Godfrey that she faked her outburst, then kisses him, at which point the man, in a rare show of total bafflement and loss of control, nearly panics before ingrained social protocols kick in on instinct, hilariously bowing to his admirer before nearly sprinting out of the room.

The film interweaves Irene’s scheme to woo Godfrey with the butler’s own machinations to confront the Bullocks with their corrupted stasis, and the mixture of Lombard’s wild energy and Powell’s more deliberate, laconic sarcasm modulates the usual breakneck pace of screwball. Compared to its more anarchic peers, My Man Godfrey acerbically laces its romantic storyline with a socially conscious message. The film explicitly acknowledges a fact tacitly alluded to in other films of its ilk: that screwball’s focus on the wealthy stems from the freedom that the rich had during the Depression to remain whimsical and narcissistic while the average American desperately scraped to survive. This forthright political subtext plays into the film’s finale, which not only resolves Godfrey’s subtle war with Cordelia and his relationship with Irene but also finds him steadfastly remembering his other homeless friends at the dump as he lifts himself out of poverty. It’s a rare show of collective betterment in the couple-oriented realm of screwball comedy.

Sourced from a 4K restoration, the Criterion Collection’s Blu-ray highlights the radiance of the film. The opening scene in the hobo camp shimmers with refractions of campfires, while the opulent décor of the Bullock home glints with dazzling brightness. The film’s use of shadows feels richer than ever, with unimpeachable black levels that lack any visible crushing. Elsewhere, grain distribution and image clarity are consistently strong and natural throughout the film. The lossless audio is pristine, blending crowd sounds at the edges of the mix while keeping dialogue situated clearly in the center.

Critic Gary Giddins discusses Gregory La Cava’s deft incorporation of politics into his work, tackling heady, timely subjects with a delicate touch. Also contributing an interview is critic Nick Pinkerton, who further unpacks the director’s career and subtle visual and thematic trademarks. A radio version of the film with the starring cast is also included, as are archival newsreels that depict the Great Depression. A brief montage of bloopers shows William Powell and Carole Lombard getting tongue-tied over the film’s filigrees of dialogue. An accompanying booklet contains an essay by Farran Smith Nehme that thoroughly delves into La Cava’s politics and style, as well as the distinct and interlocking screen presences of the film’s actors.

Gregory La Cava’s supple but cutting romantic comedy is one of the finest works of class-conscious comedy in Hollywood history, and Criterion’s sparkling Blu-ray transfer makes a strong argument for the director’s acceptance as one of the finest Hollywood filmmakers of the 1930s.